A hardtail for every occasion 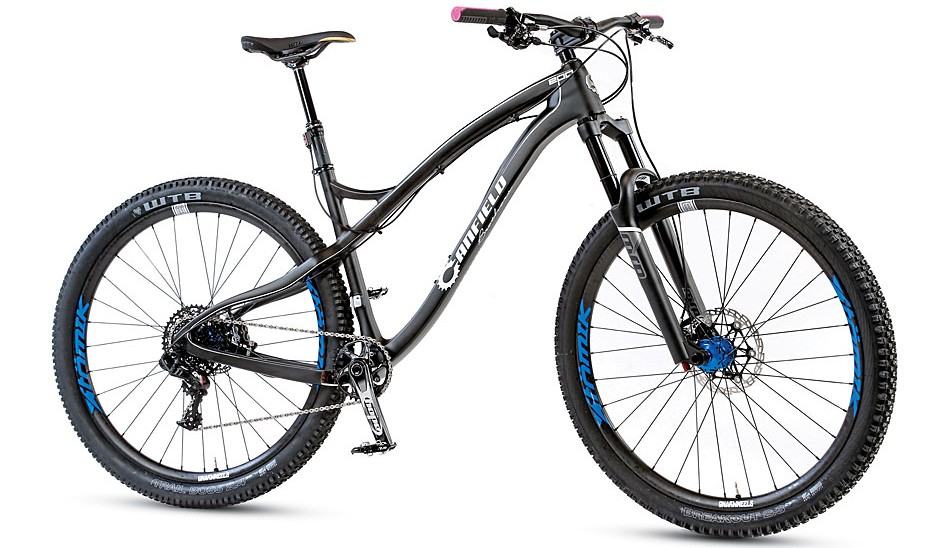 Hardtail trailbikes are in a niche of their own, and the hardtail faithful swear by them. We have ridden our fair share of these unique sleds, but this is the first Canfield Brothers steed that we have been able to get our hands on. Canfield Brothers has created these bikes for a cult following of riders who will tell you that they are simply the best bikes on the planet. Canfield designs bikes to suit riders simply looking to have fun and to ride hard.

The EPO is only available as a frame, so this gave us the perfect opportunity to piece together a very unique project bike with contributions from some of the best component-makers in the industry. After some brainstorming and reaching out to a handful of companies, we had our components in hand and were ready to put together this much-anticipated rig.

Canfield Brothers has one agenda, and that’s simply to manufacture fun bikes. A bike like the EPO forgoes most modern mountain bike technology to deliver a simple frame that is built around the idea of riding hard and having a good time. The carbon fiber frame and long, low, slack geometry have a strong appeal for the aggressive trail rider who isn’t interested in riding something from a more prominent company. In a sense, the EPO is suited for the mountain biking purist who wants to stand out and belong to a small, committed community. 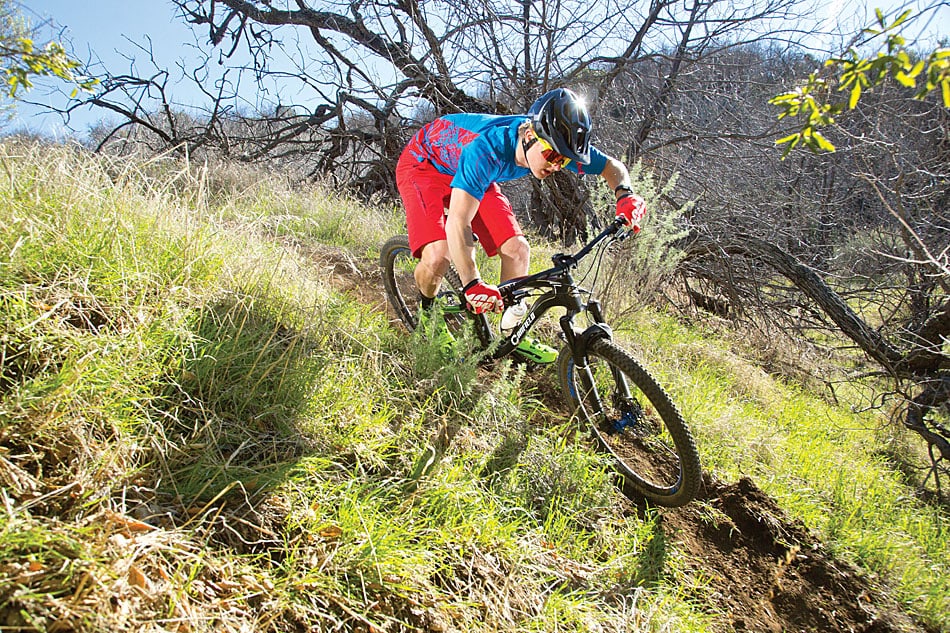 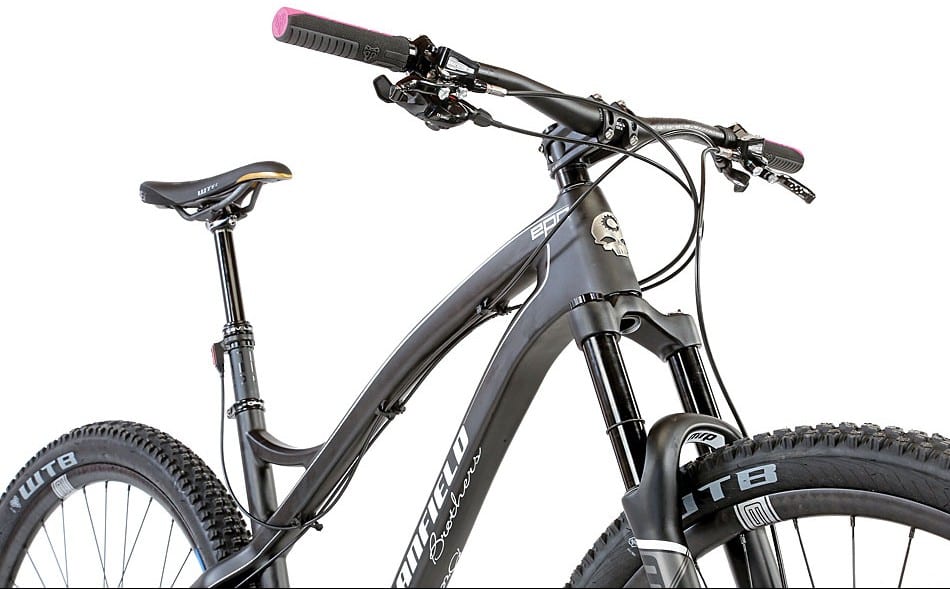 Meat on the bones: The EPO frame has a very unique look with aggressive lines. The carbon tubing is strong and bold throughout the whole design and delivers a stiff ride. Canfield Brothers sells their bikes as frame-only options, giving riders a blank canvas to get as creative with their builds as their pocketbooks will allow.

The EPO has full external cable routing, a 12×142 rear thru-axle and a threaded bottom bracket. Canfield built the EPO around the long, low, slack geometry found on modern enduro bikes. It has a 66.8-degree head angle when using 140-millimeter forks. It is worth noting that the EPO is only available in medium and large sizes. For $1500 riders can get a full-carbon frame directly from Canfield Brothers. 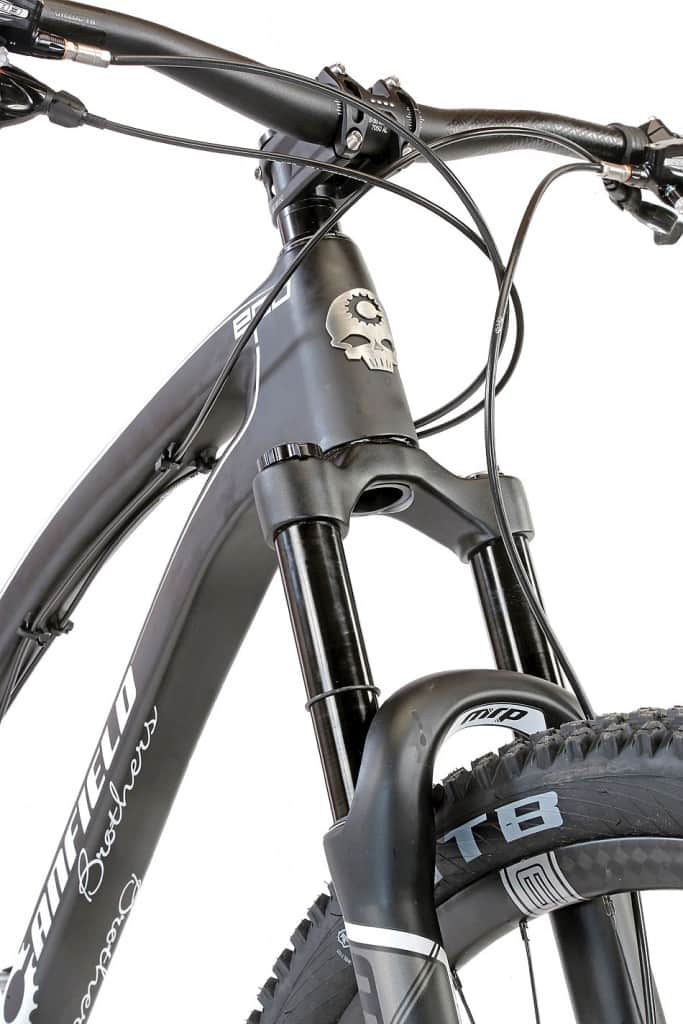 Simple and effective: The EPO is designed with several current “standard” technologies, including full-carbon construction and a tapered head tube, yet the overall design is kept relatively simple. With external cable routing, a threaded bottom bracket and non-Boost rear triangle, the EPO has an agenda of its own and caters to the home mechanic in all of us.

We spent quite a bit of time dialing in the EPO build, and there were a few components that stood out once we started putting the pieces together. The Hope cranks with the spider-less retainer ring stood out for their incredible quality and polished black finish. Atomik carbon provided the Mod-Hook trail wheels laced up on Profile Racing Elite hubs, which were a major standout. Profile hubs have a very unique sound and almost instant engagement that greatly added to the performance of the bike. The WTB tires gave us all the traction we wanted and, thanks to the thicker sidewalls, kept us confident that we wouldn’t cut our rubbers through rocky sections. We were able to get some time in on the new PadLok grips as well and liked the new texture and compound. 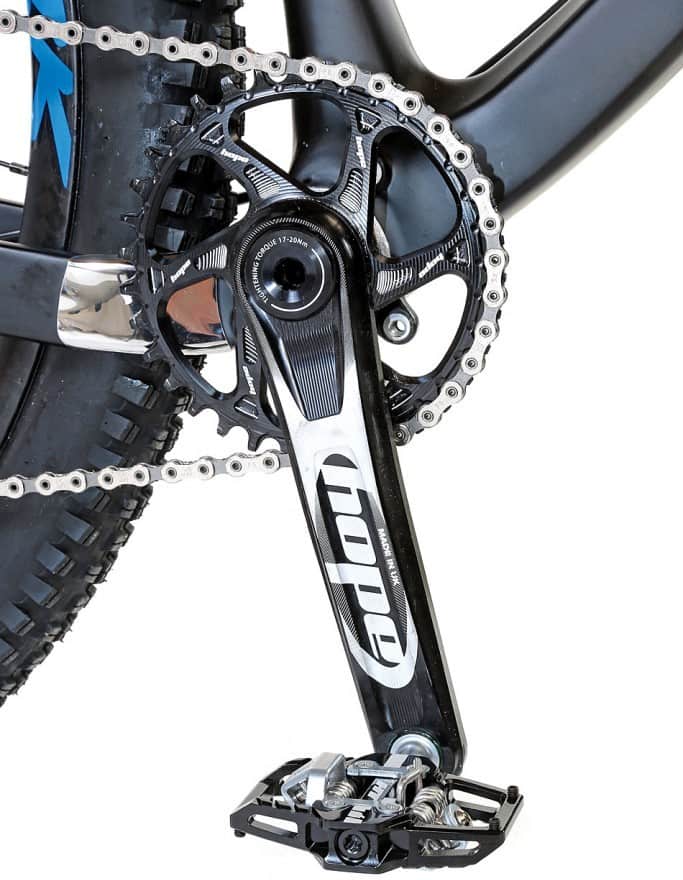 Better Hope: Hope’s brand-new cranks scream quality with a machined look that you simply don’t find on many stock bikes. We chose them for this project bike to test Hope’s reputation for quality and attention to detail. Watch for a long-term review of these cranks in an upcoming issue. For this test they held their own. 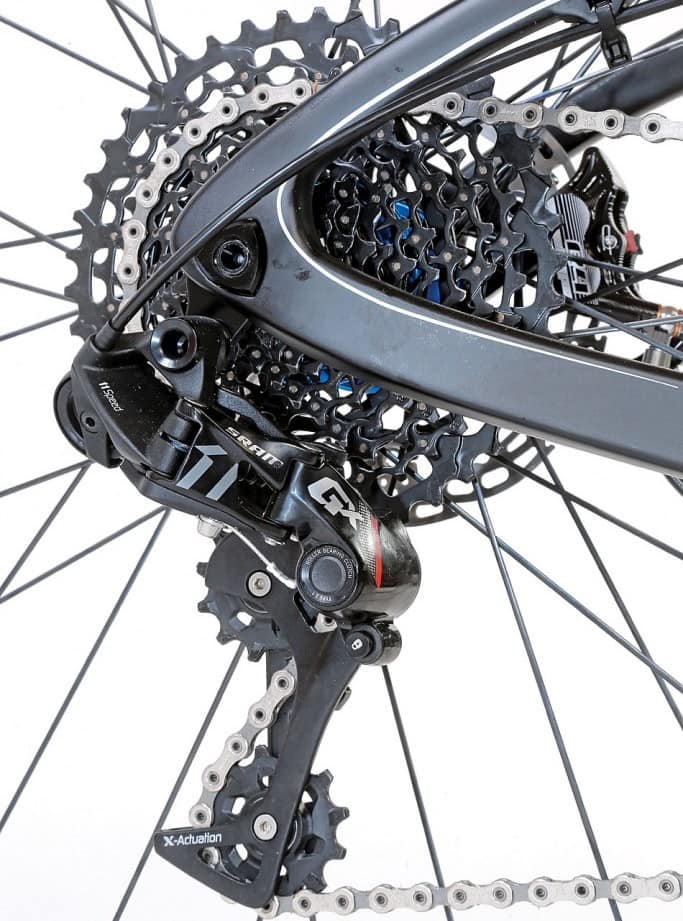 Consistent feel: We have used SRAM’s relatively new GX drivetrain on a couple of test bikes, but were really able to get a feel for the system on the EPO. The shifting was consistent and smooth and gave us plenty of gear options with the 10-42 cassette and plenty of chainring options. 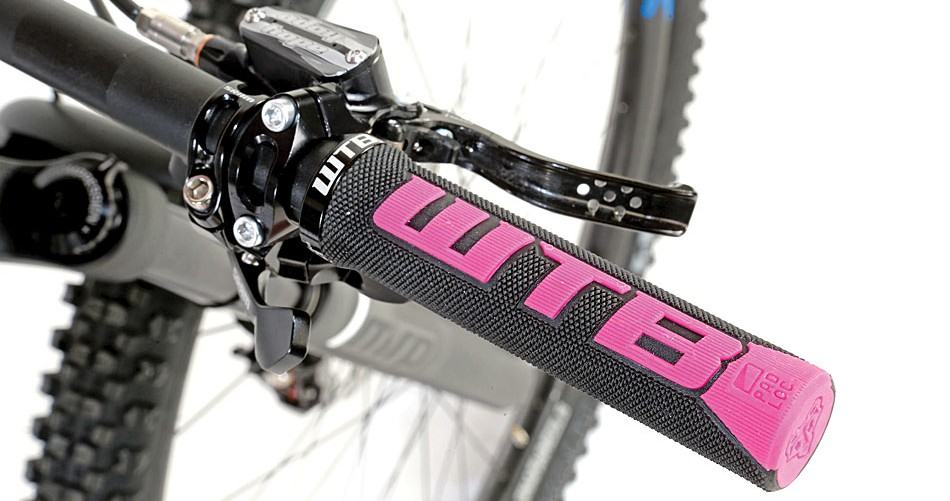 It’s pink: While everything on our build had a subtle theme, the new WTB Padlock grips provided a little extra color flair. They’re also designed with a unique locking mechanism that not only keeps them in place but makes them more comfortable.

Canfield provided the MRP Stage fork with the frame to help get our build started. MRP built plenty of adjustments into the fork, including the ability to adjust the ramp control on the travel. After playing with some of the adjustments and setting the sag, we headed out to our local trails to see just what the EPO could handle.

We built the EPO with a full Gamut cockpit using 760-millimeter-wide bars and a 60-millimeter stem. Given the long geometry, we might have opted for a slightly shorter stem to bring the bars in slightly closer, but overall we were happy with the fit. 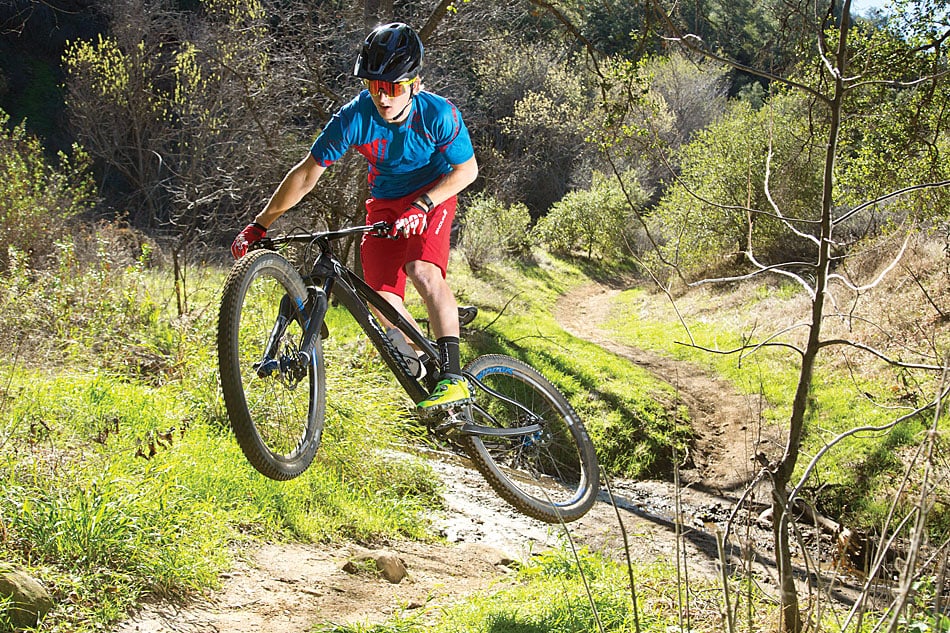 Send it: Canfield Brothers built the EPO with an agenda—to let riders have fun when the tires hit the
dirt. For us, any lip became a mini “sender” that needed to be tested.

Descending: If there is one place the EPO wants to be, it’s pointed down the trail. The burly 2.3 WTB Breakout front tire combined with the plush feel of the MRP Stage gave us plenty of confidence at high speeds and on steep sections of trail. The EPO didn’t feel quite as stable at slow, technical speeds, but felt more stable the faster we went.

The EPO has very stout frame tubes that make the bike look sturdy. We were curious about just how much vertical compliance we would get out of the design. We ran a slightly wider 2.4 WTB Trail Boss rear tire for a little more cushion. The frame itself provided a surprisingly smooth ride, especially over rockier sections of trail. Canfield built the carbon frame with sweeping lines to handle rough terrain and to ensure that riders would be as comfortable as possible. The geometry was fun and playful, but at the end of the day this was still a hardtail, and thus rode like one. 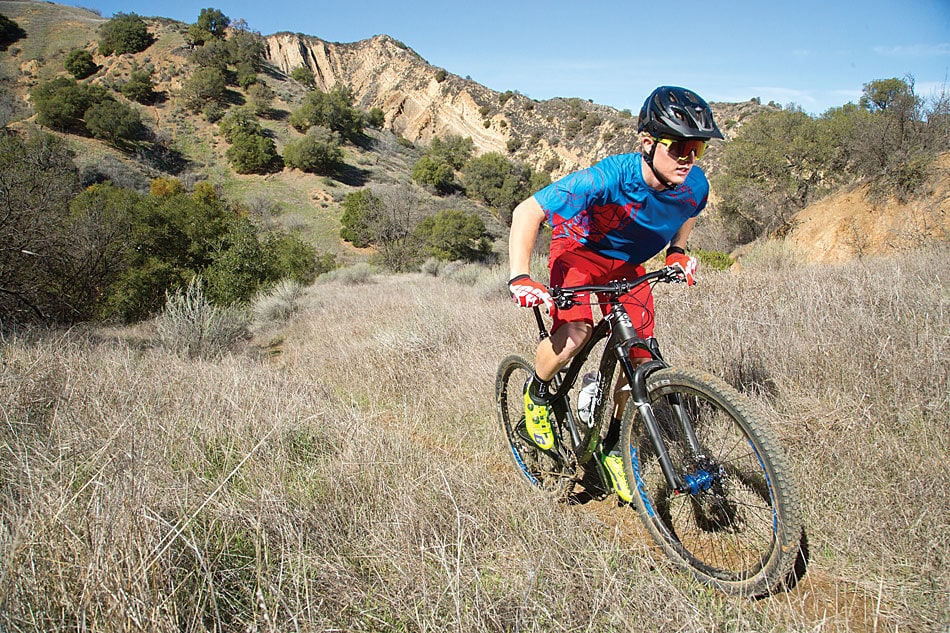 Take a little extra: The EPO is by no means a cross-country racer, but that doesn’t mean it won’t climb. The geometry gave our testers a comfortable position to grind out long hills.

Climbing: Hardtails have a reputation for being the first to the top, and while the EPO didn’t set any climbing records, it made it up the hills. The geometry allowed us to sit forward on the saddle on steep sections and get good leverage. Since our test bike was built up with burlier parts, the bike didn’t feel as lively on the climbs. Our testers did feel like they were able to get in a comfortable, static position for long grinds, which eased some of the pain of pedaling uphill.

Cornering: With the dropper post down and our testers standing out of the saddle, we pushed the EPO hard into corners and scratched for every bit of traction we could get out of the tires. The frame felt stiff and stable through tight sections and held a line confidently. 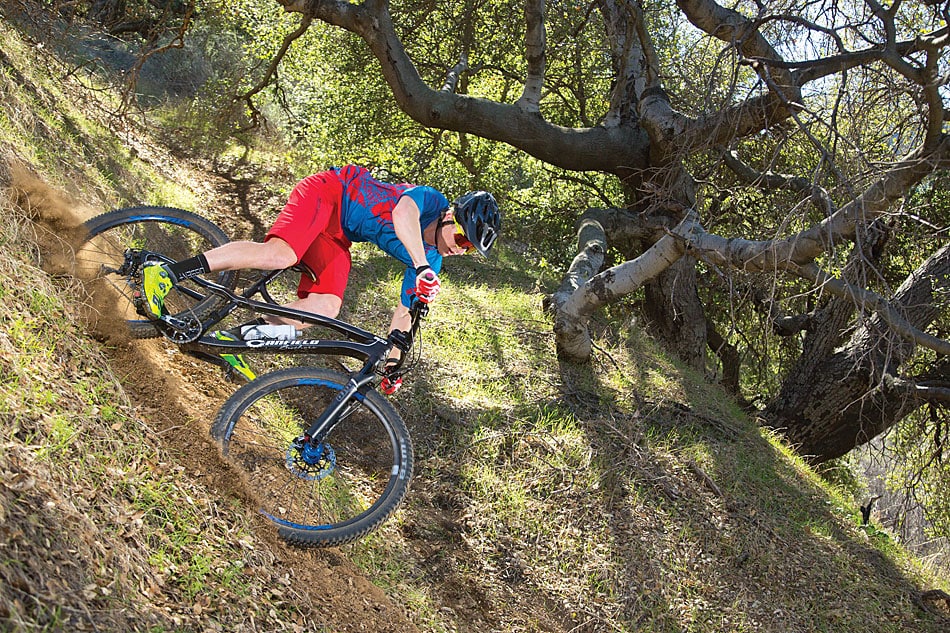 The rear thru-axle began to back out after about 45 minutes of hard riding. We tied the wedge and spring internally on the Maxle, and even tried a different one, but we still had issues throughout our testing. The MRP fork performed well but was heavy, especially in comparison to other forks in this category. We definitely recommend choosing a lighter fork. A lighter front end will make the EPO more nimble and easier to throw over obstacles. We liked that the frame used external cable routing for the shift and brake cables, but would have liked at least stealth routing for the dropper post.

Canfield Brothers is a consumer-direct company that specializes in frame-only options. If you’re an experienced rider who knows exactly what you want and how to get it, the EPO is a solid option for a fun all-around trailbike. Riders should keep in mind that this is still a hardtail at the end of the day, and it will ride like one (although it’s slightly more fun than most). The option to run plus-size tires does make the EPO a good choice for those looking to experiment, or for riders who live in areas with more volatile weather that requires bigger tires for parts of the year.

However you cut it, the EPO is loaded with options and will no doubt leave riders baring their pearly whites at the end of the day, as long as the trail wasn’t so rough that they lost a few teeth along the way. 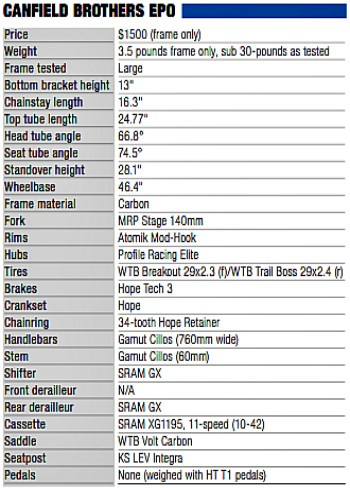