The Art of Mountain Bike Photography 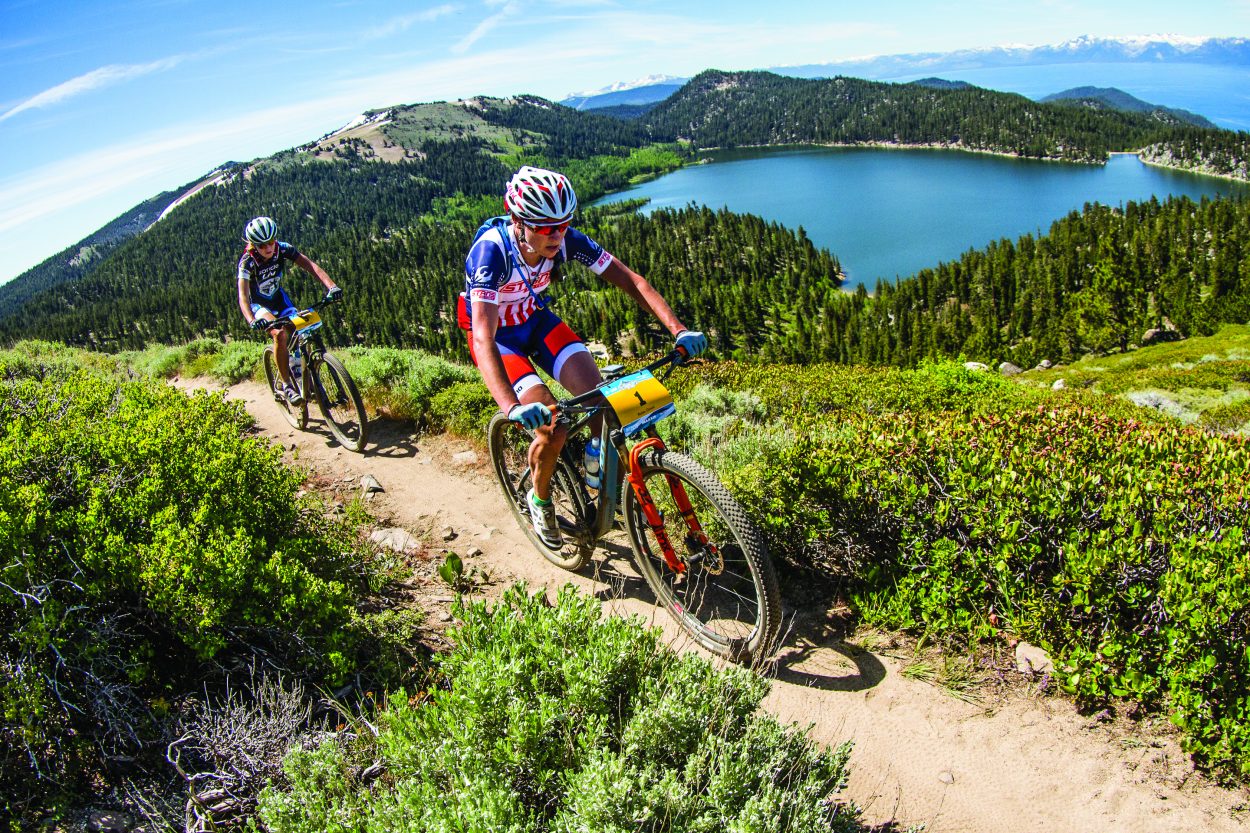 Rose Grant (lead) and Amy Beisel battle it out at Nevada’s Carson City Off Road race in 2016. This was an extremely demanding 50-mile course that didn’t leave riders much time to enjoy the long scenic views of Lake Tahoe. 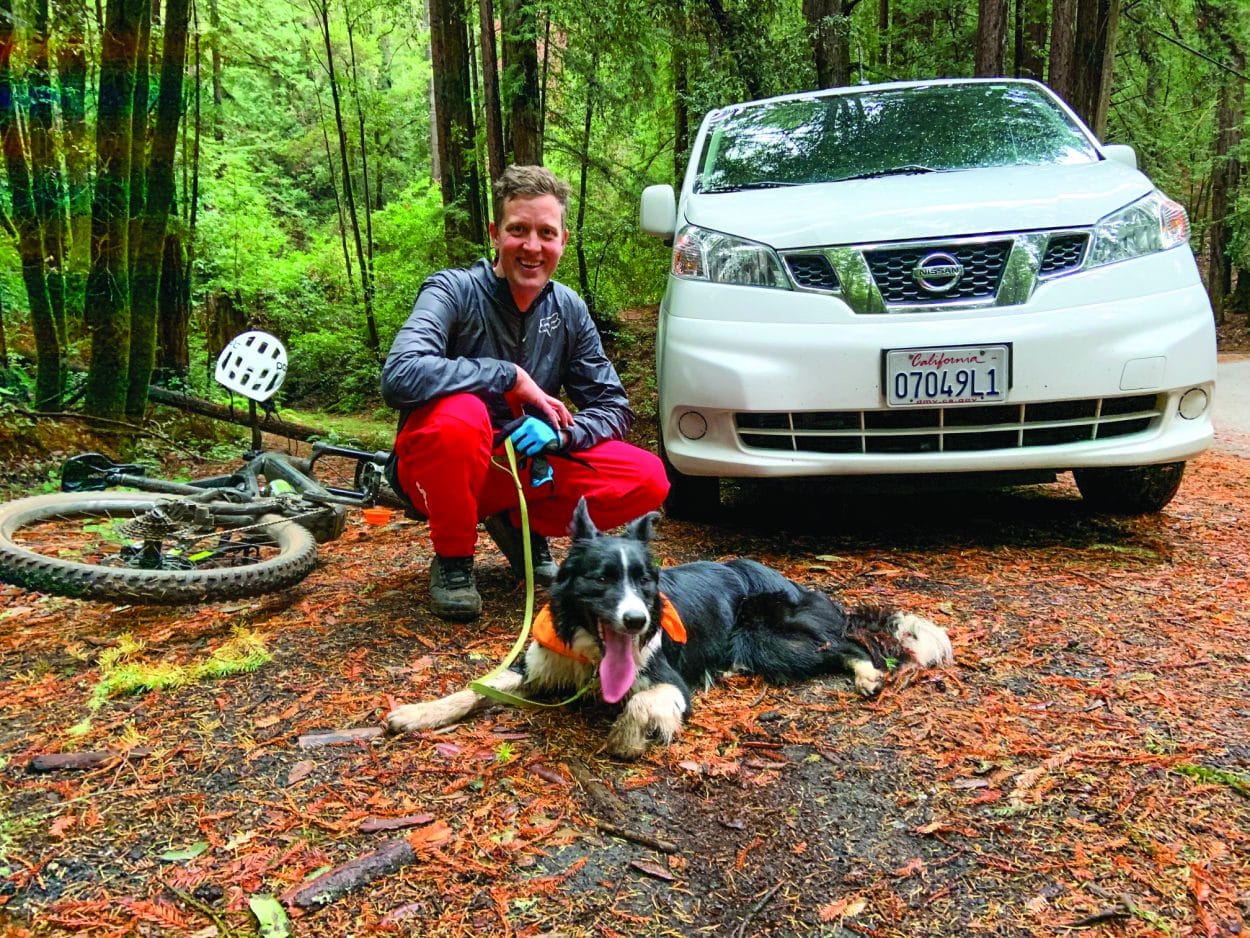 Over the last few years, Dan Severson has emerged as one of the most talented photographers in mountain biking. What are his secrets? Read on to find out.

Where did you grow up?

After moving around a lot as a kid, our family settled back in my dad’s hometown of San Clemente, California. 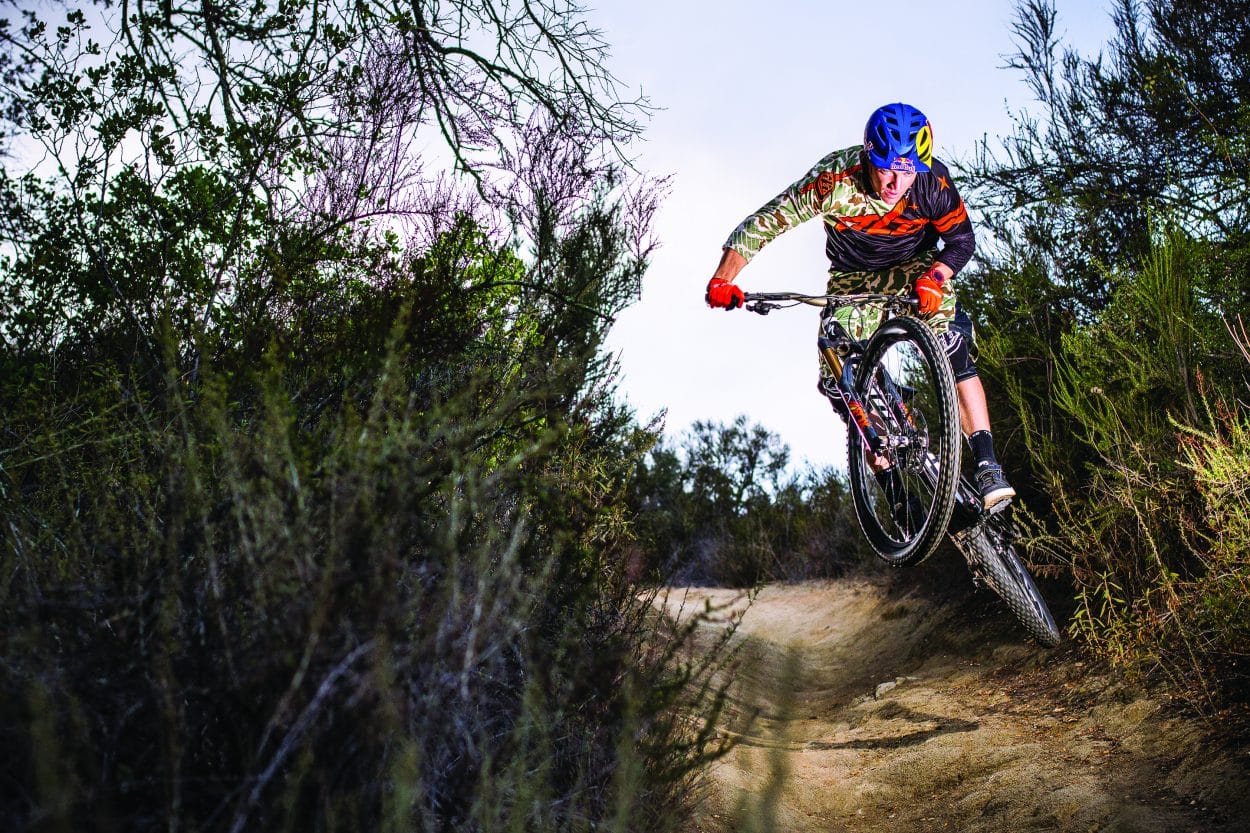 With a wide variety of trails close to home, Aaron Gwin has a lot to choose from. Back in 2016, we shot his local XC loop at Santa Rosa Preserve. Even though this particular section of trail didn’t offer much, I always seem to be amazed at how a talented rider can turn nothing into something.

It was 2005. I bought a Gary Fisher hardtail for $400. At the time, it seemed like a fortune. I originally wanted to use it to commute to work, but once I realized how sweaty I would get by the time I got to work, I decided to ride it all over town instead, just checking out the surf and exploring. Eventually, I started going out into the hills outside of town and discovered long fire roads and fun singletrack. Coming from a surfing background, where you are usually dealing with crowds and constantly changing conditions, the fact that I could go out, have fun and get a good workout without all the hassles was extremely enticing. I was hooked. 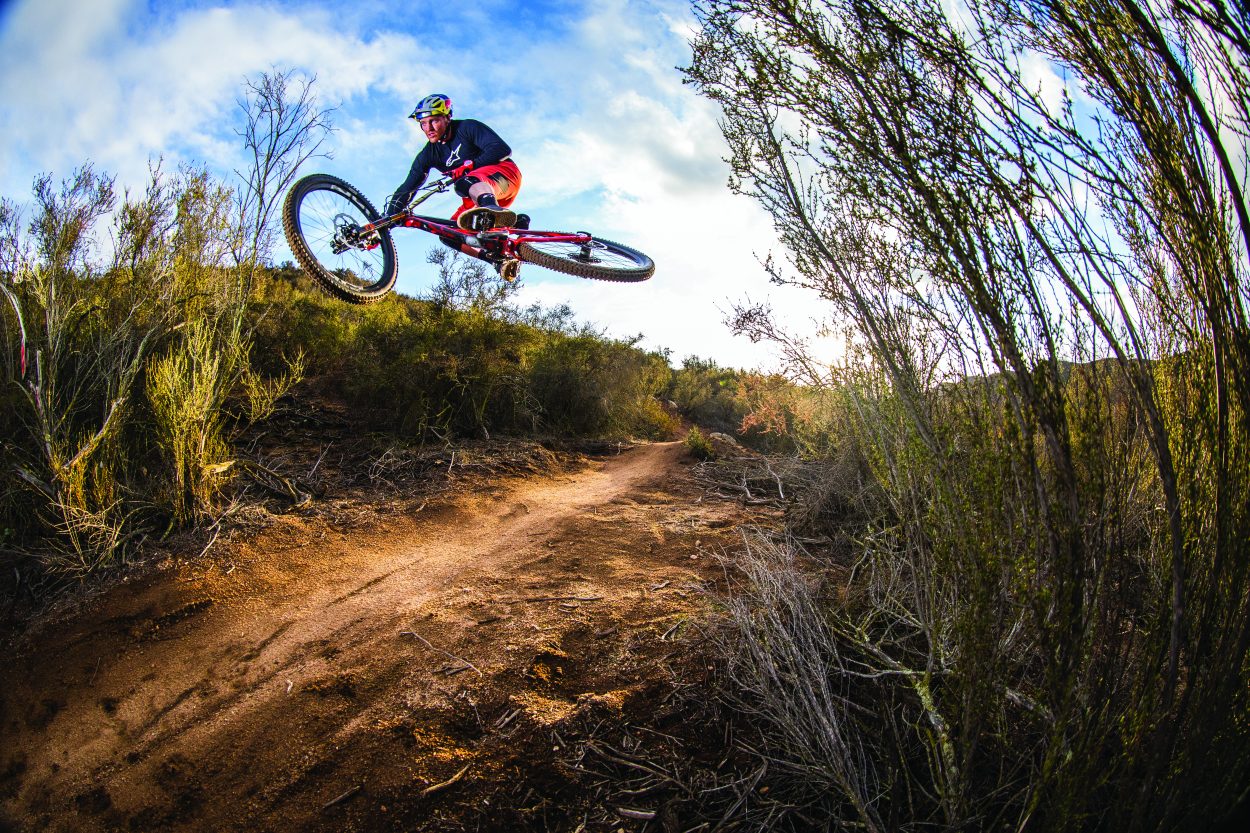 With roots in motocross, Aaron Gwin is extremely comfortable in the air.

Did you ever race mountain bikes?

I’ve never done a bike race, but it looks fun. 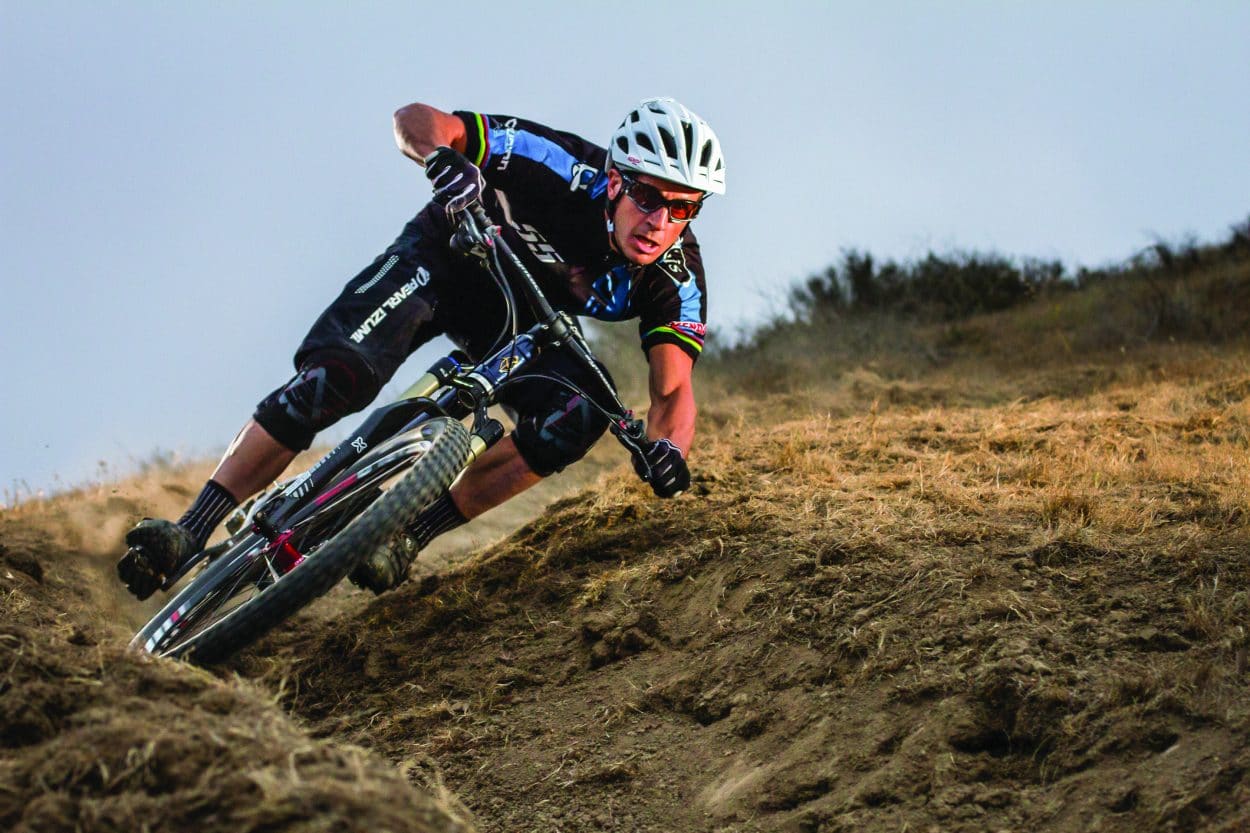 A true master of form on the bike, Brian Lopes demonstrates his cornering technique on this Laguna Beach berm.

How did you get interested in mountain bike photography?

Around 2011, I had a bad crash on my downhill bike that resulted in a broken thumb. I figured, if I can’t ride, I might as well get out and shoot some photos of friends riding. Being out in nature was way better than being indoors. Once I started, I fell in love with it and couldn’t stop. The hardest part was learning about the camera settings and how to use flash. 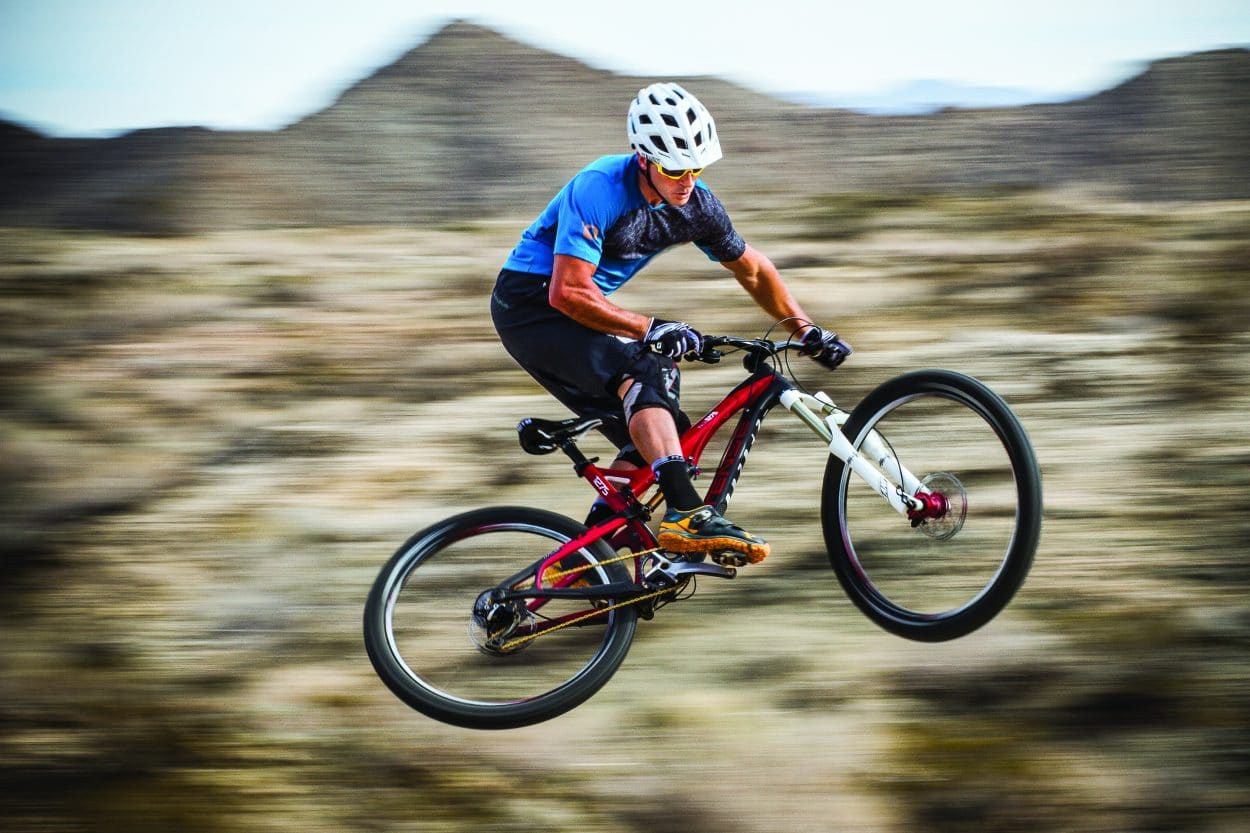 Palm Springs, California, has some great trails. You can find long views and plenty of technical desert rock to navigate. Brian Lopes opts for the air on this section of trail.

Who was the first pro rider you shot with?

The first professional rider I shot with was Hans Rey. For the first couple years, I was mainly shooting with friends, and I remember how hard it was to line up people to go out with. It seemed crazy to try to shoot with a fully sponsored professional rider at that time. Being close to Laguna Beach, I remembered seeing Hans and Richie Schley out riding one time. They seemed really approachable. A few weeks later I got on Facebook and found Hans Rey. I decided it wouldn’t hurt to try to message him, although I thought to myself, there is no way he is going to get back to me. Later that day, I got home and realized I had a voicemail from Hans! It was so crazy to call him back and be talking to one of the most famous riders in the world. I was super nervous but also excited. Long story short, we ended up doing quite a few projects together over the years, and he introduced me to other Laguna Beach mountain bike legends, Brian Lopes and Richie Schley. I owe a lot to Hans for giving me a chance and essentially kick-starting my career. Thanks, Hans! 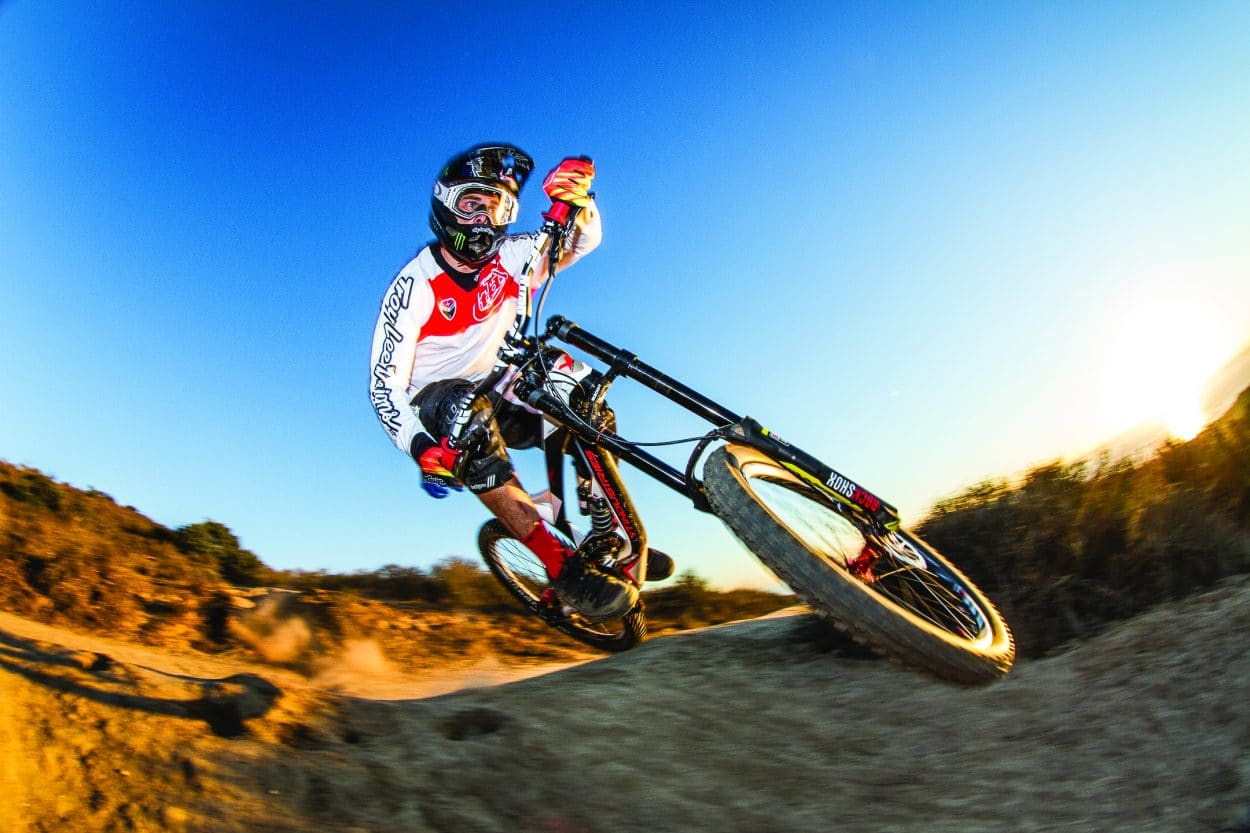 This photo was taken when Cam Zink had just got on YT Industries and happened to be rolling through my neck of the woods. We only had about 40 minutes to shoot but managed to get some great shots. Cam is one of the most down-to-earth guys out there.

How and when did you get your first photos published?

It was about 2013. I had been shooting as much as possible around that time, going to races and shooting with friends. I got a call from Colby at ODI asking if I could shoot a photo of Barry Nobles for the ODI/Vans grip they were coming out with. It was a full-page ad in Decline magazine (R.I.P.) and we shot it in Barry’s backyard pump track out in Menifee. 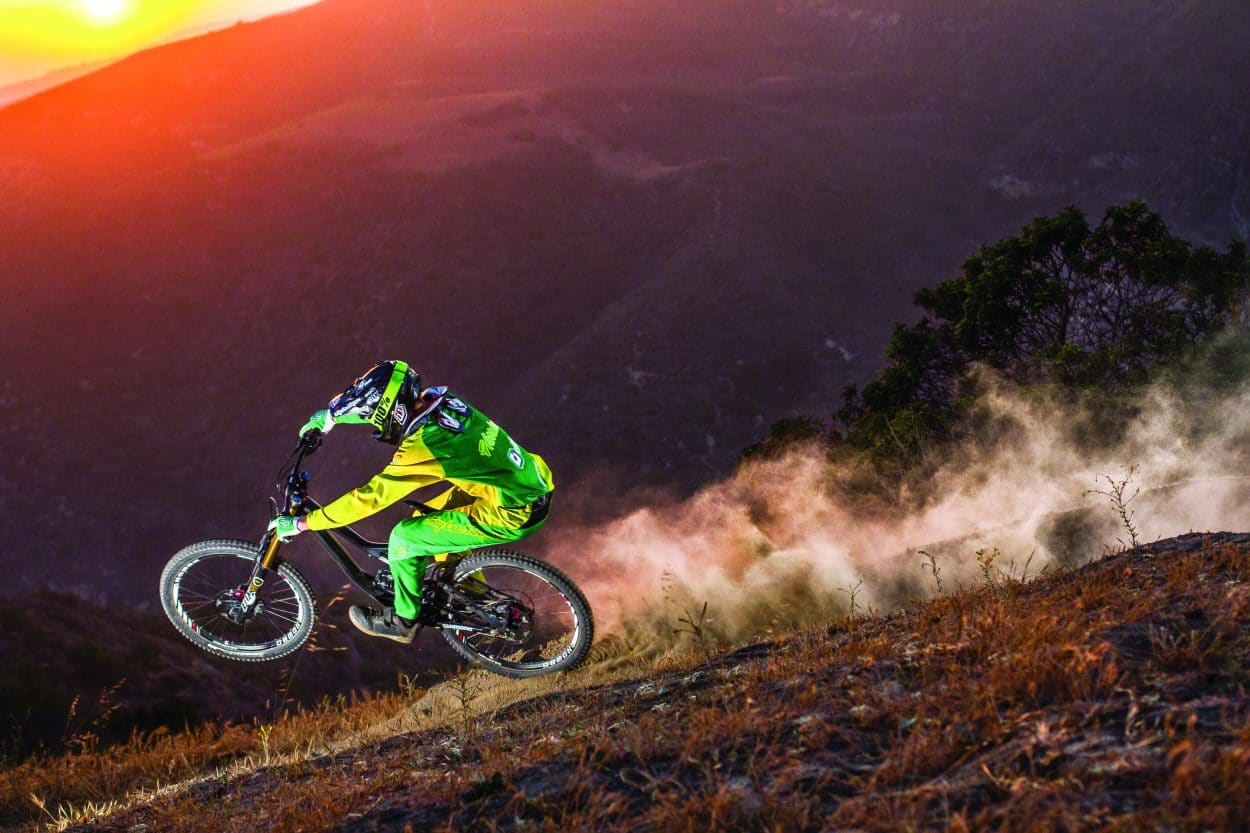 What did you think when that happened?

Oh man, I was so excited! I checked the newsstands every week for the issue, and when it came out, I’m pretty sure I bought three copies. Seeing my shot in print felt so rewarding after investing so much time into photography. 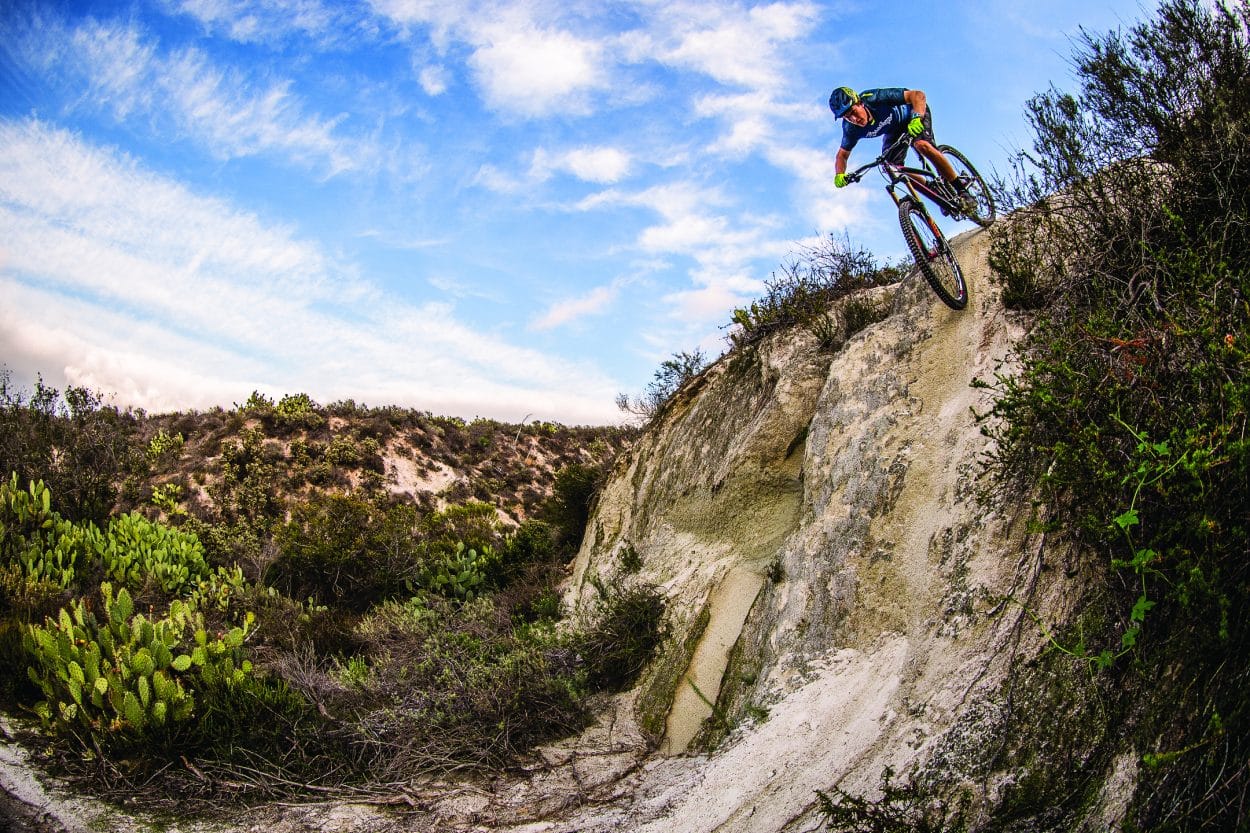 Were you going to school or working back then?

I was working at the skate shoe company Etnies at the time doing T-shirt graphics. It’s funny, because most people whom I’ve met through mountain biking know me as a photographer, but I’ve actually done graphic design and illustration my whole life. Photography was always something I did on the side for fun. 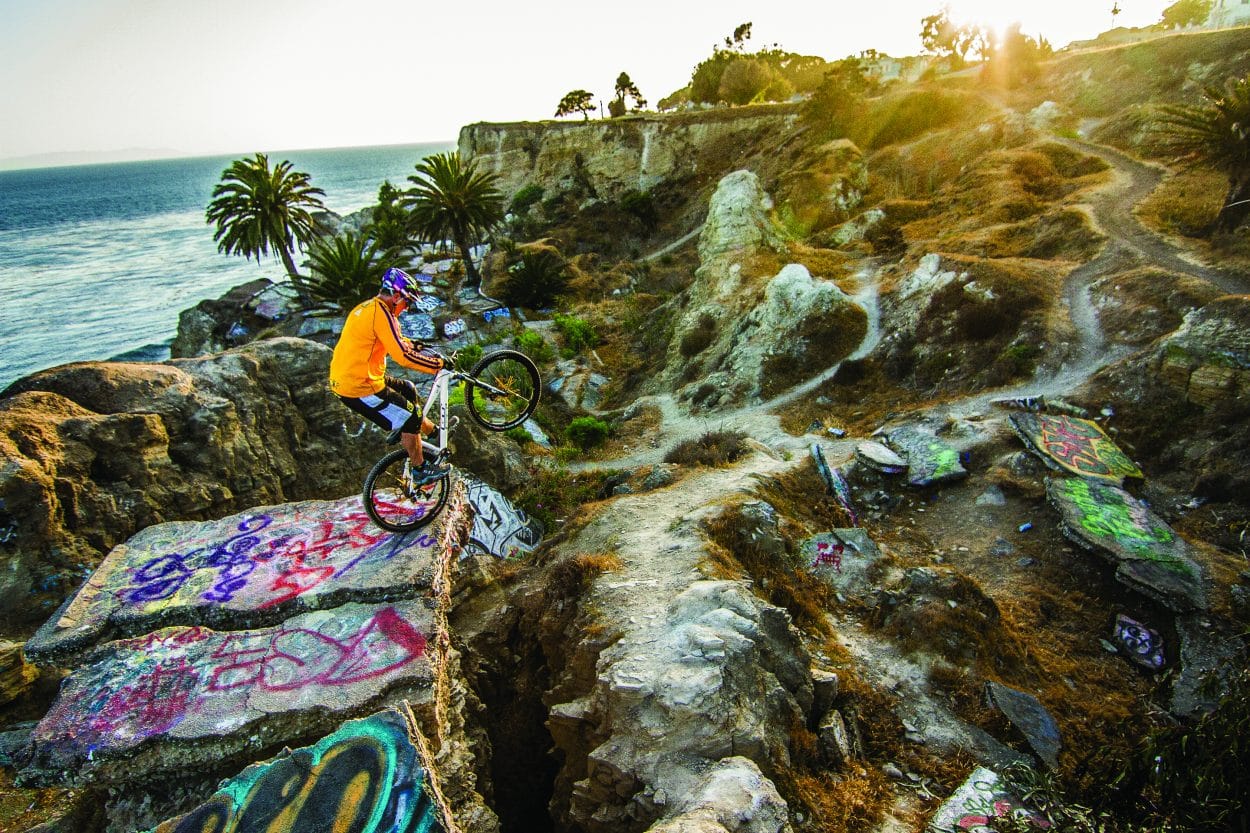 Hans Rey, showing his mastery of trials riding on what was once a city sidewalk. Back in 1929, this neighborhood in San Pedro, California, succumbed to a massive natural landslide, taking down the coastal bluff and sending many homes into the sea.

How many years have you been shooting mountain bikes now? 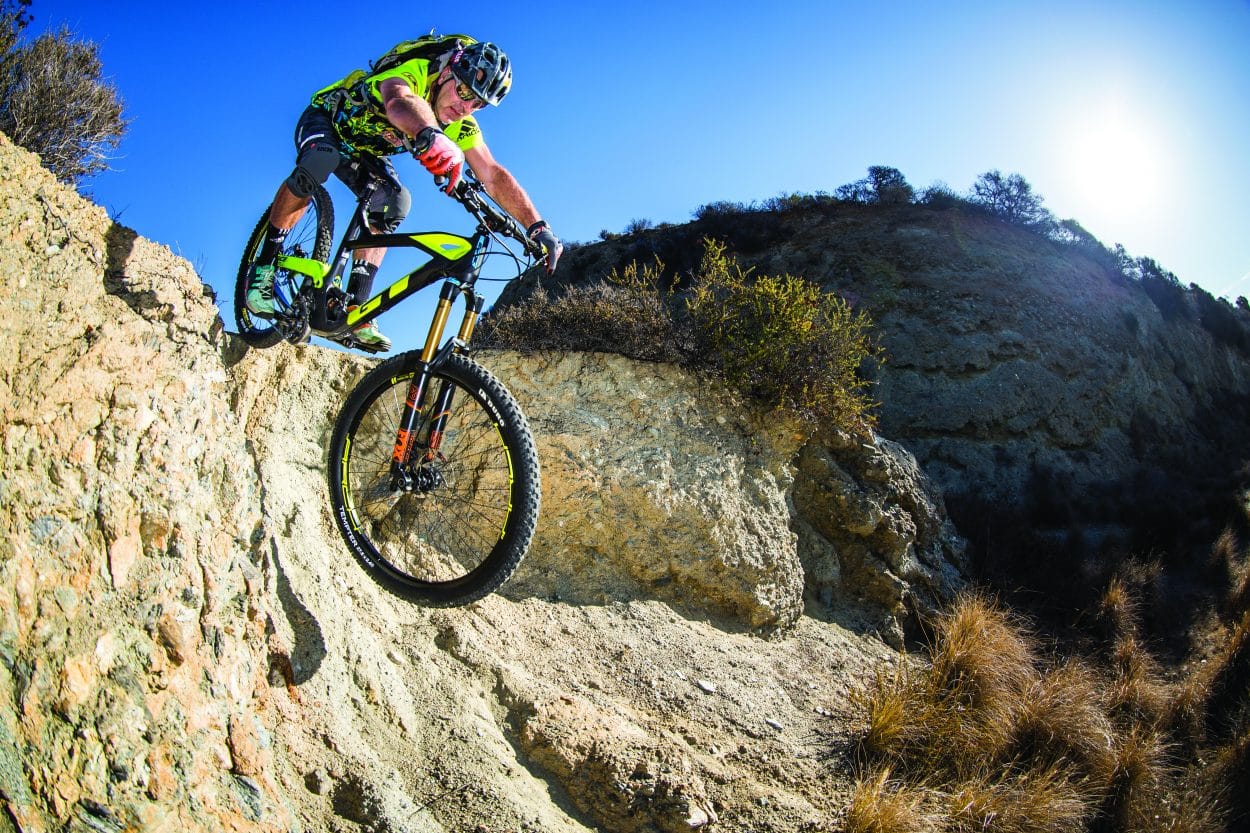 What are some of your favorite places when it comes to shooting mountain bike photos?

Any location that has good scenery, long views and potential for good light. I think it’s really important to always be exploring new spots. I love hunting for new locations or finding a trail that might just need a bit of work to make it rideable. Some trails or jump zones get neglected over time and just need to be brought back from the dead. I’ve spent hours digging and moving bushes just to bring a spot to life or to create something new. There’s a great reward in that. 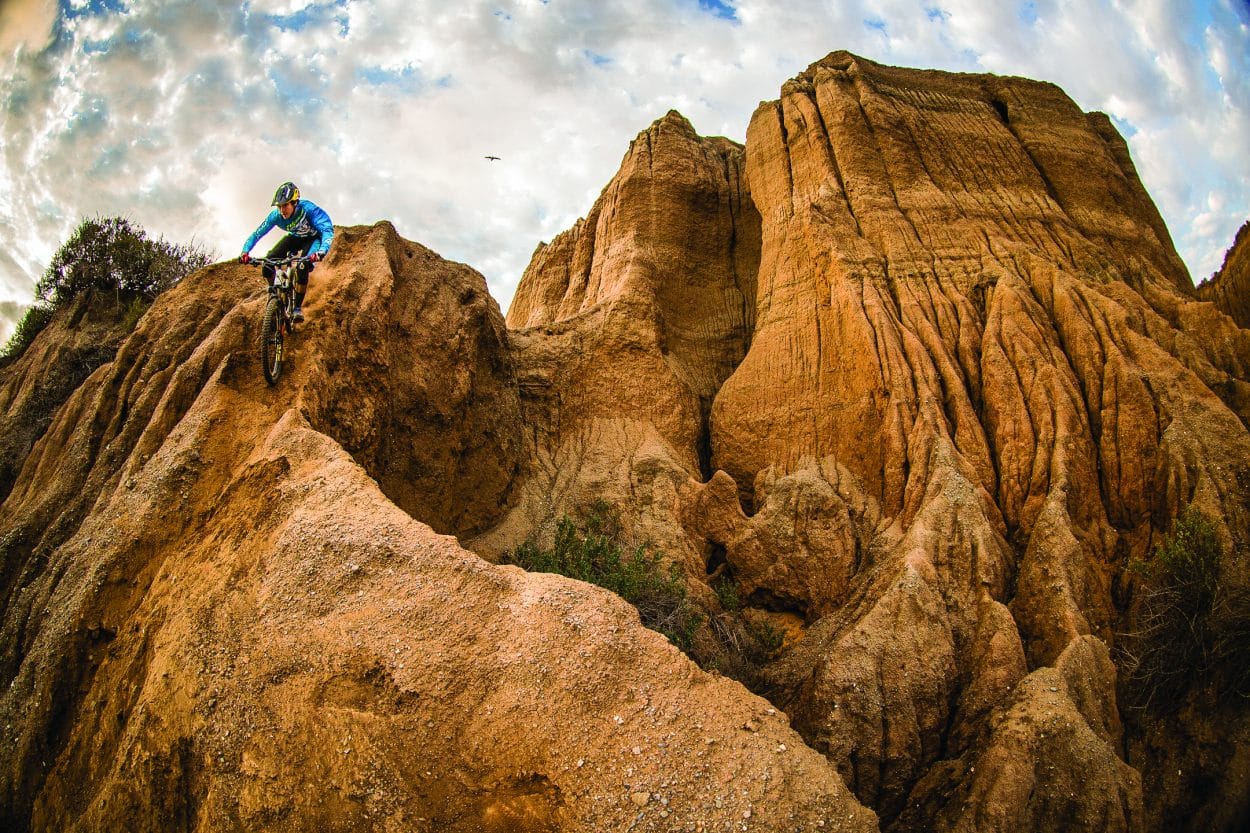 Who are some of your favorite riders?

For me, I just want it to be mellow and have a good time, so anyone who fits that is preferred. I have to say that 99 percent of the riders I’ve shot with are genuinely nice people and great to be around. Kevin Aiello and I have had some great missions. Aaron Gwin is super chill and really down to earth. I’m always amazed at what these guys can do.

I really like photographing animals. It’s really challenging to find them out in the wild, and to be able to get a good closeup shot can be extremely hard. I tried to get a closeup of a coyote for a really long time, but they are super elusive and won’t let you get anywhere near them. I just end up following them for hours from a long distance. My toughest shot was shooting a red fox out in the desert at night when it was pitch black. Getting the focus right and not overdoing the flash was extremely tough. I also enjoy shooting surfing from time to time.

What’s the hardest part about your job?

I’d say the physical aspect of it can definitely be hard. Super-long days wearing a 40-pound pack and doing long climbs on the bike can be taxing. There is also the mental side of preparation and planning for an event, creating a shot list, and then being in the right place at the right time. If it’s for web, there is also the immediate need for editing and story, which could mean late nights. Once you get it all done, though, it’s super rewarding.

I have been using a Canon 5D Mark IV. I’ve been a big fan of Canon for a long time now, and I’ve gone through quite a few. My first DSLR was a Rebel XT back in 2009. I still have it, and looking at it now, the design looks so primitive. 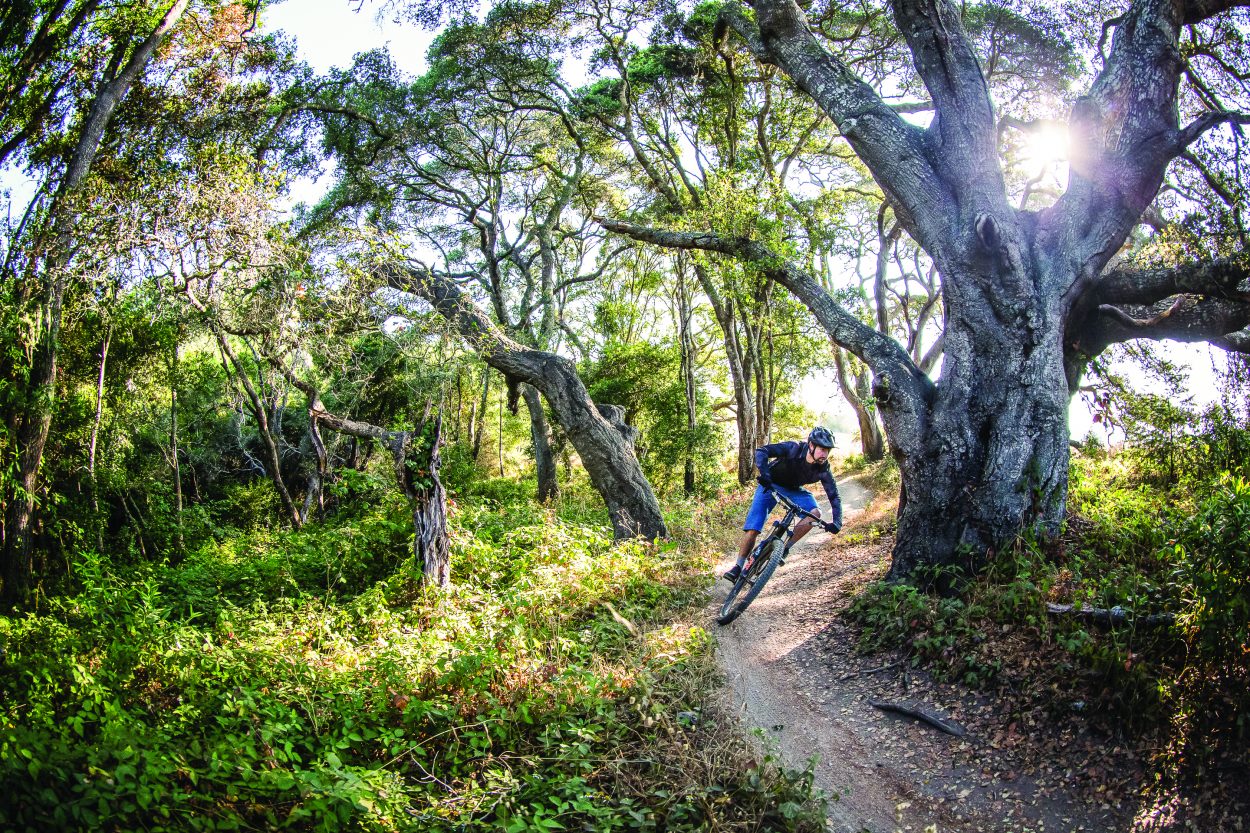 What are your favorite lenses?

I love fisheye lenses. That comes from my background in skateboarding. Most of my favorite photos as a kid in the magazines were shot with a fisheye. I also like the opposite effect of a telephoto lens. I use a 100mm–400mm quite a bit. The compression you can get with the background is really cool. Last but not least is my trusty 50mm f/1.4 lens. The sharpness is amazing, and I love the simplicity of a fixed lens.

If you could give aspiring photographers three tips to help them get better photos of mountain biking, what would you tell them?

Probably the first major one is to try to plan your photo shoots in the early morning or close to sunset. Good light can make a huge difference and create more drama than midday overhead light. The second thing would be to not get too caught up in having the latest, most expensive gear. You can still get great shots with entry-level equipment, as long as you have a good vision of what you are looking for. My last tip would be to be selective with the shutter button. Look for the exact spot where the best action will be and shoot that moment. This is the opposite of the machine-gun, spray-and-pray technique. It will save you tons of time when it comes to editing, and you will also use less hard-drive space. Other than that, just have fun and always keep your camera with you. You never know when that elusive coyote will be out!