The Loss of a Mountain Bike Legend

The Loss of a Mountain Bike Legend 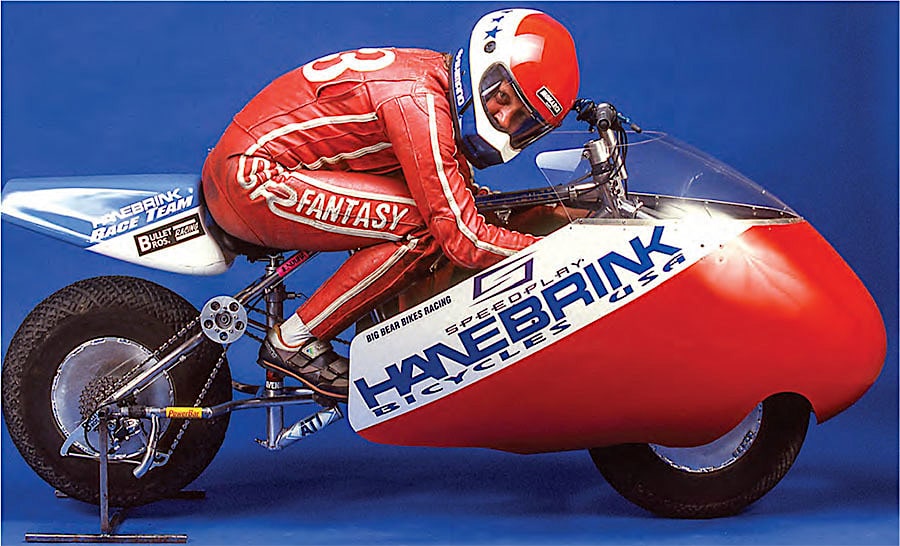 Dan Hanebrink and his “world’s fastest downhill mountain bike,” as it appeared in our October 1994 issue of MBA.

Dan had recently been diagnosed with leukemia, but the actual cause of death was uncertain, Jared told us. The family didn’t feel that an autopsy was necessary. Dan had been in failing health for years and had died of natural causes, most likely connected to edema (excess water retention), according to Jared. Dan’s body was found lying on the floor of his home next to his couch by his girlfriend, Vicki Betts, a former Olympic long jumper, who went to his house to check on him. Dan’s passing came two months before his 80th birthday.

Dan had grown up in Mayfield, Kentucky, before going off to study drafting at the International College of Design and Technology in Chicago, Illinois. Though his education focused primarily on drafting, Dan turned himself into much more of a mechanical and aerodynamics engineer by trade.

Hanebrink turned to road-racing motorcycles as a young man and became fascinated with the design of cars, motorcycles and bicycles.

Dan first rose to fame with his design of an amphibious, four-wheel-drive, four-wheel-steering, amphibious car that he called the “Box.” “The body was made of fiberglass, and he engineered the whole thing,” Dan’s son Jared told us. “It appeared on the cover of Popular Science magazine in 1976.”

Hanebrink came to fame in the bicycle world four years later. He had modified some BMX frames to produce 20-inchwheeled GPV (gravity-powered vehicle) bikes with aerodynamic fairings for coasting races down the steep roads in the mountains near Big Bear and Palm Springs, California. Hanebrink and his lifelong motorcycle/road-racing buddies Bob Lebo and Andie Baines would race them down Running Springs Road near Big Bear, California, Jared recalls. It was a way for them to enjoy the high-speed thrill of motorcycle racing without the expense. Dean Bradley (who would go on to be the first editor of Mountain Bike Action) got involved in Dan’s GPV races in the late 1970s, then wrote an article about Dan and his GPV bikes for Action Now magazine in 1980.

Seven years later, a big race featuring Dan’s GPV bikes garnered widespread attention in the mountains near Palm Springs, California. Hanebrink and many of America’s top BMX racers gathered at the top of a mountain to race their bikes down the road commonly known as the Palm Springs Tramway. The race was covered by both ESPN television and the world’s leading BMX magazines. The racers reached speeds of more than 85 mile per hour in the event. Hanebrink won that first major GPV race riding one of his own bikes. More than 30 racers competed in the event, which was deemed to be one of the most dangerous events the Hi-Torque staff had ever seen.

The sport of GPV racing returned to worldwide attention in the year 2000 as part of the Summer X Games for ESPN Television. BMX World Champion Tommy Brackens, who placed third in the Palm Springs Tramway event, won this time, with Jared Hanebrink finishing second and Dan Hanebrink taking fifth.

Hanebrink deserves some of the credit for the popularity of the modern fat bike. In 1991 Dan invented what he called “extreme-terrain bikes”—strange-looking bikes that came with 8-, 9- or 10-inch-wide tires (depending on the model). They were designed for riding in snow, sand and anything else one could find. After discovering that the front wheel didn’t steer well in snow, Dan designed an extra fork for the bike to allow the mounting of two small skis at the front of the bike for better handling on the slopes. MBA tested that bike in our August 1993 issue and found that it worked well both on the beach and in the snow.

In 1994 Hanebrink had modified his GPV design to create a downhill mountain bike with oversized ATV tires and an aerodynamic fairing, one that made the cover of Mountain Bike Action in 1994.

Later, Hanebrink competed in the Winter X Games, racing one of those aerodynamic super-fat bikes as a downhill snow bike. In the televised portion of the event, Dan’s braking parachute got hit by ferocious sideways gust of wind that yanked Hanebrink’s bike off course to produce one of the most spectacular crashes in X Games history. Dan survived it, of course, and went back to his design work afterwards.

After having been a motorcycle road racer in his youth, Hanebrink got into racing mountain bikes and motocross bikes as he got older. Dan won six national titles in mountain biking, split between both downhill and cross-country racing. Dan also raced motocross at Southern California’s Glen Helen Raceway for a few years when he was in his late 60s and early 70s.

For the last five years of his life, Dan’s health had been steadily declining, his son Jared told MBA, and Hanebrink turned his attention away from racing to the design and construction of the “Hustler,” an electric motorcycle that Dan created that could reach speeds of 160 miles per hour. Dan built two of them. “He was very focused on that bike,” says Jared, who did the CAD (computer-assisted design) work on the bike for his father. The design was complete when Dan died, but Jared does not plan to take over his dad’s business of making and selling such bikes. Jared has his own career as an engineer and designer.

Dan Hanebrink was one of the great innovators in the bicycle and motorcycle world for over 40 years. Though he is most famous for his own innovations and designs, Dan also worked as an engineer and designer for Subaru, Yakima Racks and Disneyland.

Hanebrink is survived by his son Jared, 41, and his three daughters—Aimee, 48; Jessie, 43; and Rani, 38. Although Dan and his wife Claudia (their kids’ mom) divorced after 20 years of marriage, they remained close friends until Dan’s death.