The Passing of a Mountain Bike Legend: Dan Hanebrink 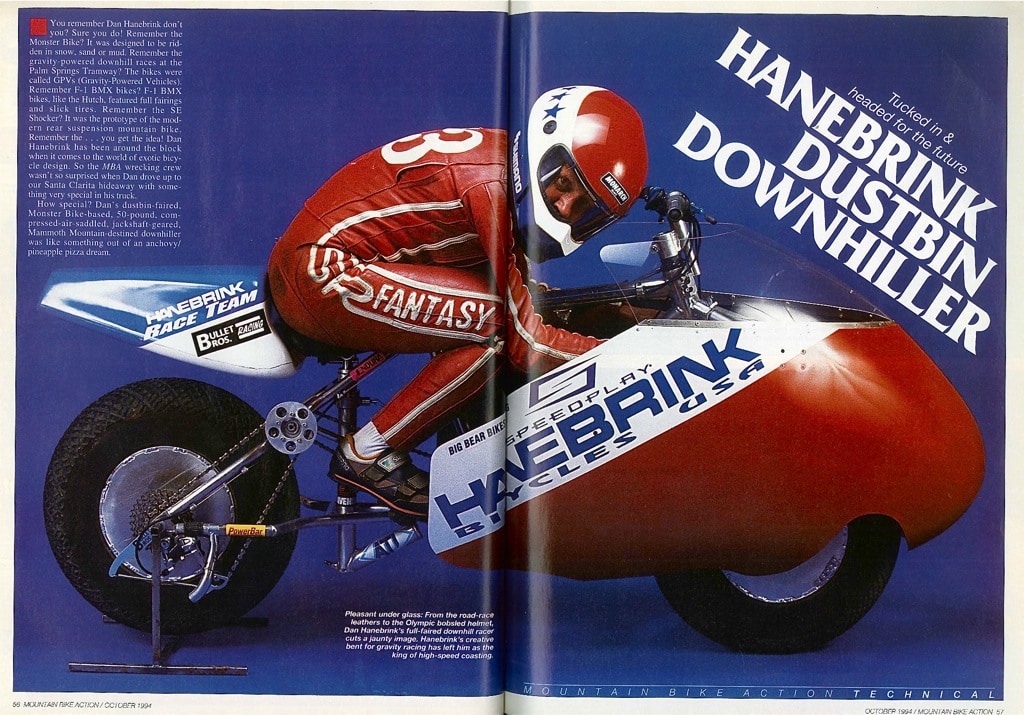 The late Dan Hanebrink, as he appeared in our October 1994 issue with his aerodynamic downhill mountain bike.

We are saddened to report that Dan Hanebrink has passed away in Big Bear, California, as a result of complications of leukemia, according to his family. Dan, who was about to turn 80 next month, was one of the first designers of rear-suspension mountain bikes back in the 1980s. He and his Mountain Shocker rear-suspension bike appeared in the first issue of Mountain Bike Action in July 1986.

Dan was one of the great innovators in the bicycle world for more than 30 years. In addition to developing some of the earliest rear-suspension designs in our sport, he came up with numerous other inventions as well. In fact, Hanebrink was probably one of the most creative minds in the bike industry. He rose to fame in the 1980s for coming up with aerodynamic fairings for BMX bikes and turned them into downhill road-racing machines on the Palm Springs Tramway. Later he applied that knowledge to develop downhill mountain bikes with fairings, too.

In 1991, Hanebrink developed what may well have been the earliest fat bikes in mountain biking. He called them “Extreme Terrain Bikes”— strange-looking bikes with eight-inch-wide tires—designed for riding in mud, snow and sand and anything else you could find.

A fit and avid racer in both mountain biking and motocross into his 60s and 70s, Hanebrink won six national titles within his age category in mountain biking.

New Bikes and Products from Crankworx