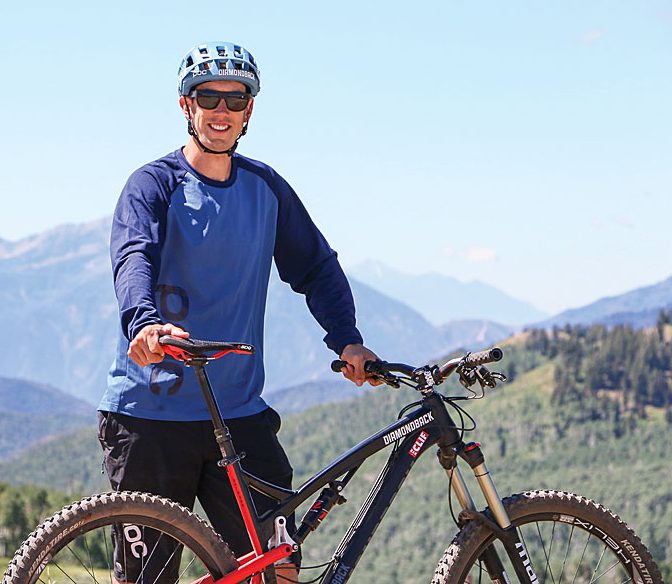 If someone were to ask Eric Porter what category he races, his response would simply 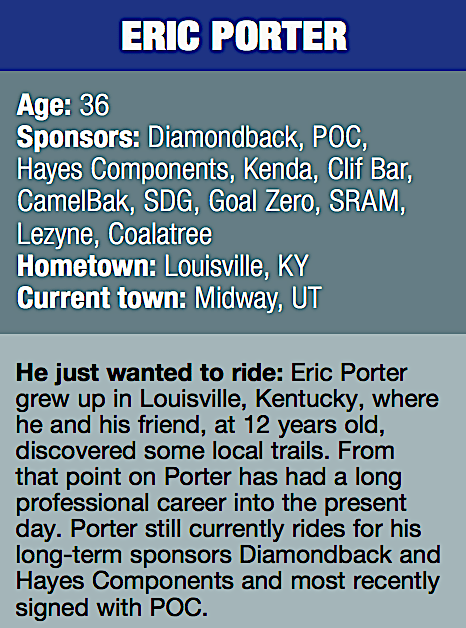 be, “I ride cat-fun.” Porter built his lifelong professional mountain biking career around having a blast riding his bike. Don’t let that fool you, though. Porter is definitely an exceptional rider. If his many podiums don’t speak for themselves, then his dirt-jumping skills or his impressive manuals will. In fact, we’ve witnessed Porter doing 20-plus-mile-an-hour manuals down trails tightly lined with aspen trees on more than one occasion. Porter is not only an epic rider, he is also a family man. We recently had the opportunity to meet up with his family in his famous 1-acre backyard just a short drive from Park City, Utah. After descending about 18 miles directly to his house, Porter quickly changed his bike and his gear and showed us his dirt-jumping skills. Meanwhile, his two young sons were shredding the backyard pump track. If that doesn’t scream father/son bonding time, then we don’t know what does. 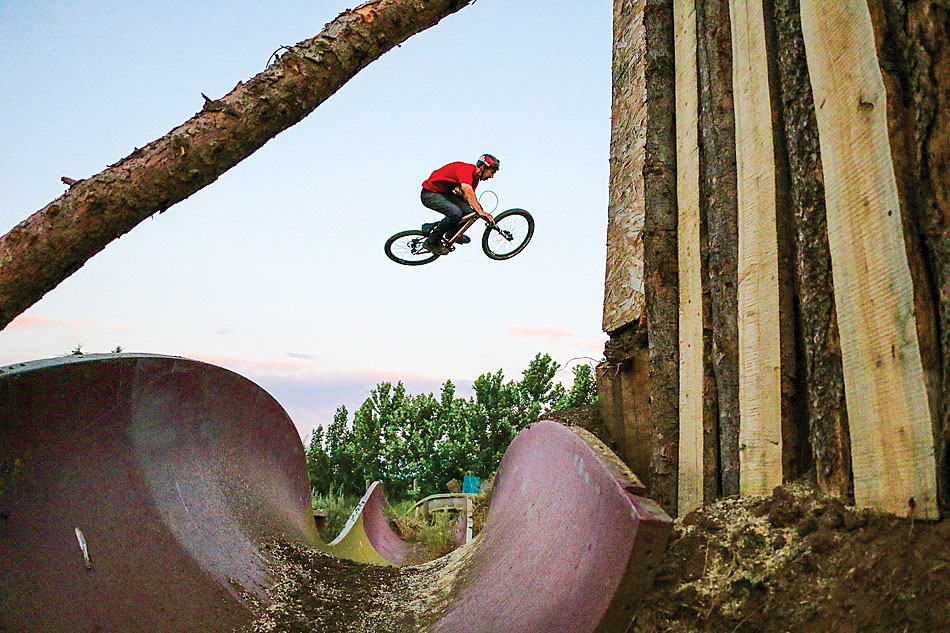 “In between each race I would go dirt jumping and street riding with Aaron Chase, Jeff Lenosky, Kyle Ebbett and others.”

When and how did you get into riding?

I was lucky enough to have trails about a mile from my house, so when I was 12, my friend Marc and I started exploring them and discovered mountain biking. It’s been a natural progression since then, with my first job being at a bike shop, then racing collegiate, then a full-time riding career. 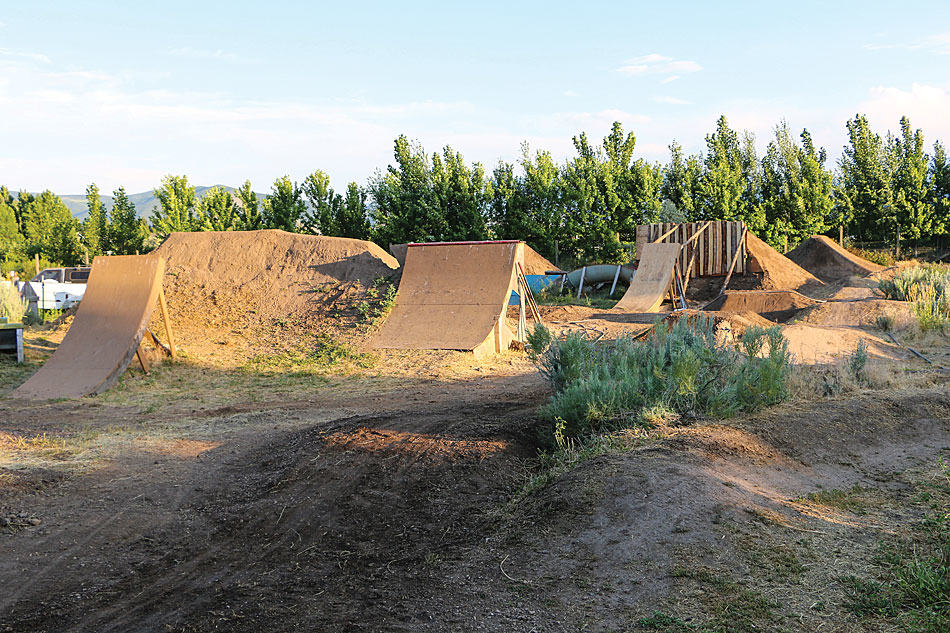 The dream backyard: Eric Porter dreamed of having an epic dirt-jump park in his backyard for years. When he settled down in Utah with his family, he finally decided it was time to build one and make his vision a reality.

When did you turn pro, and what were your most memorable events?

I turned pro after graduating from college, but not how I expected. I had just won Collegiate National Championships in downhill and dual slalom and was racing semi-pro in the NORBA Nationals, but I was never able to win in semi-pro and actually move up to the big leagues. However, in between each race, I would go dirt jumping and street riding with Aaron Chase, Jeff Lenosky, Kyle Ebbett and others, and we would film and shoot photos doing tricks and stuff. I ended up shooting my first magazine cover grinding a handrail on my dirt-jump bike, something no one else was doing. Scott Hart, who I met through collegiate racing, actually shot it. He has two MBA magazine covers himself and now runs MTB stuff at Red Bull. That cover opened some doors for me, and then I was on the podium at all the slopestyle events that following summer, which ended up turning riding into a full-time job for me! 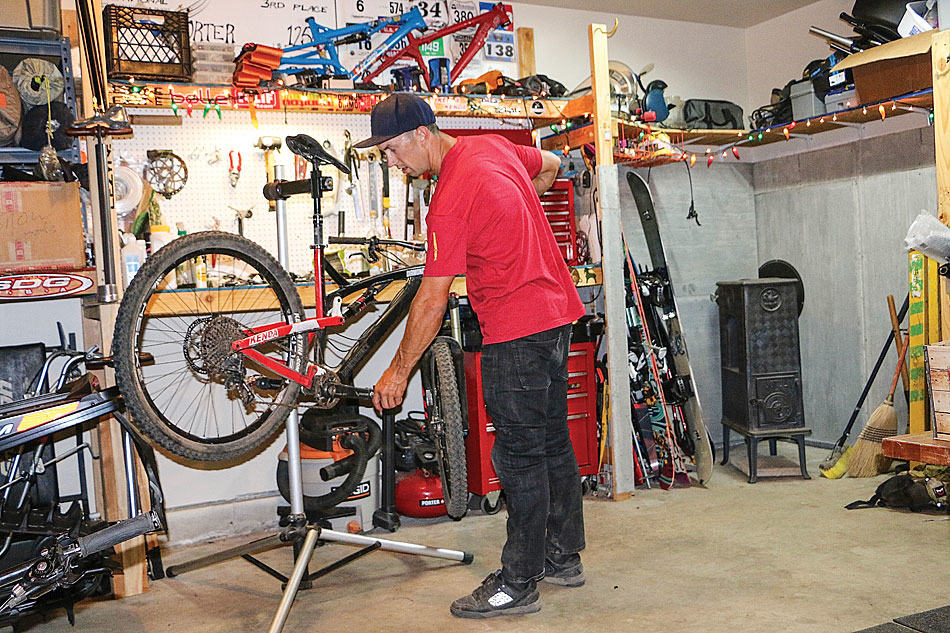 The garage: Eric Porter takes a moment to look over his Diamondback Release after a day of riding. Porter, in fact, spent many hours riding the prototype version of the Diamondback Release, making sure the geometry and overall feel of the bike were just right.

Your backyard is an awesome play-ground for mountain bikers. How long did it take you to build your dream backyard and who helped you?

The backyard riding setup was a long time in the making. For most of my life it was actually the dream that I never thought would come true. Luckily, with the housing market crash a few years ago, we were able to afford this awesome cabin with an acre, right where I want to be. After that, Diamondback came in to help with some funding, and I brought in about 50 dump-truck loads of dirt. I spent a week or so building this awesome setup. Kelly McGarry helped me with the design, and we built the roll-in and all of the wooden lips together. He was an amazing carpenter. I’m really happy to have this creation in my yard to help remember him by. He used to call my backyard the Porter Slave Labor Camp, because I have the mindset of working super-hard, long days so we can get things done sooner to ride more! The rest of the major digging crew included Derek, Bryce, Dan, Ben and a bunch of other awesome local riders. There have been a bunch of good friends that ride here, too, including Carson Storch, Cody Gessel, Jonsey Fedderson, Matt Beringer and Sasha Yaklokof. The Nitro Circus crew rides here too. 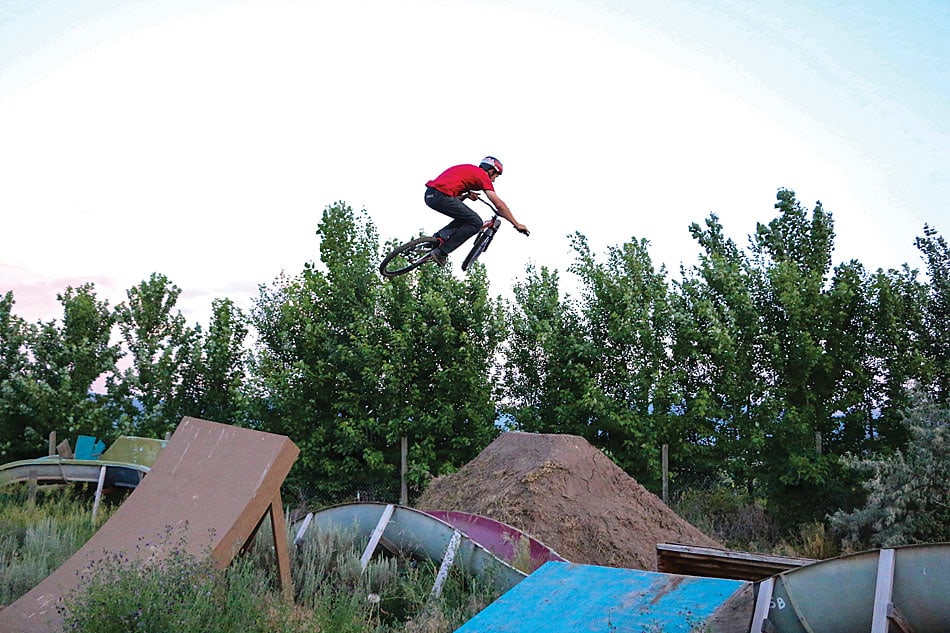 “I love to ride trails the most, but also love to dirt jump, ride down-hill, ride road and ride trials. It’s all awesome, and they all complement each other.”

Do you have any tips for aspiring backyard builders?

Don’t bite off more than you can chew. It’s a ton of work to get everything built and to maintain it, especially when there’s snow on it four months a year. I would recommend wooden lips, because they are always good to go, whereas dirt ones need maintenance to ride well.

We hear you have been doing a lot of product testing. Which companies do you work closely with?

I work really closely with Diamondback, Hayes and Kenda on testing. I have 2017–2018 stuff in my garage right now getting ridden hard! I also test stuff for CamelBak and Lezyne. I feel really fortunate to be a part of this process, and I take it seriously. It’s amazing to get the opportunity to help make the mountain bike industry better for everyone. A lot of people think companies are coming out with new stuff all the time just to make money, but in reality a lot of new products are things that the riders have been asking for, then helped test, and they are really beneficial to everyone. 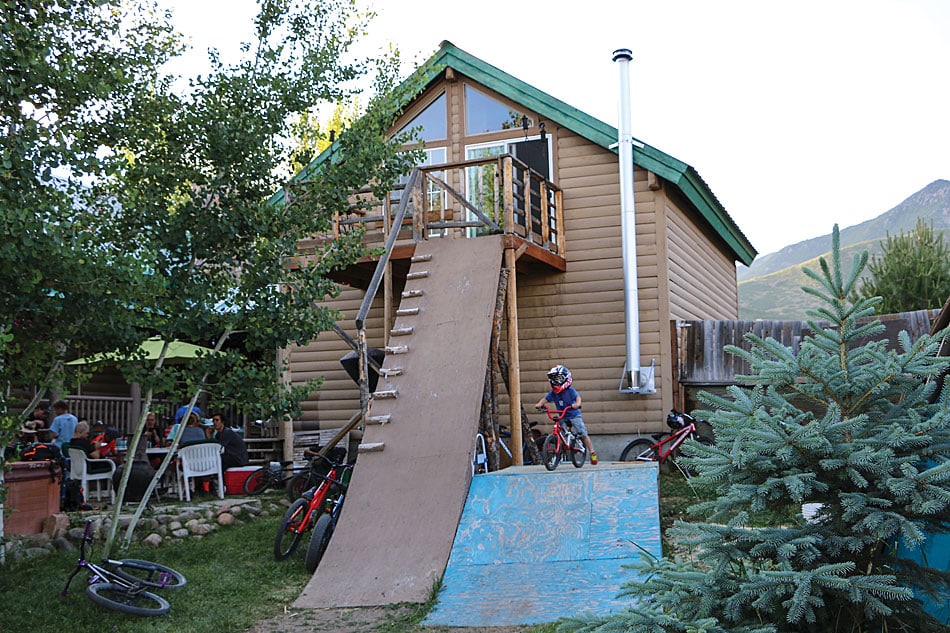 “Kelly McGarry helped me with the design, and we built the roll-in and all of the wooden lips together. He was an amazing carpenter. I’m really happy to have this creation in my yard to help remember him by.”

Your kids are both little shredders. Will we be seeing them in the pro ranks one day?

Who knows where they will take their riding? I’m making sure they have a good time and exposing them to all aspects of the sport. I just want them to enjoy it as a lifelong activity, because that’s how I view it—just the most fun thing I could be doing on any given day! If they want to take it further, then I will be more than happy to help support them and grow with it, but, honestly, I’m not sure I’m prepared to see them flying off of huge jumps yet. Maybe they’ll be into cross-country. Either way, I’ve found that the less I push it, the more they like it. It’s their sport. Same with skiing and snowboarding in the winter. 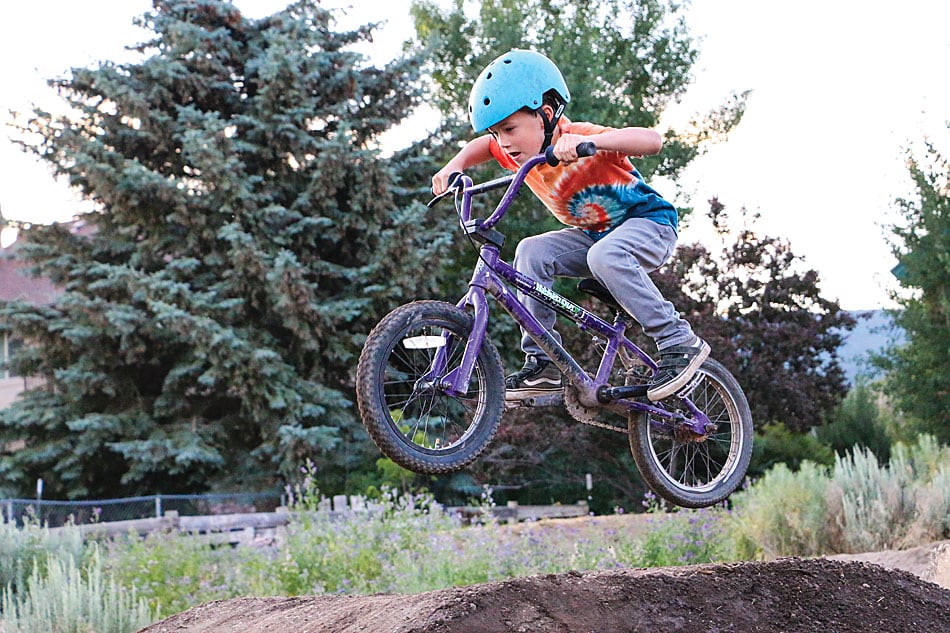 Like father, like son: Eric Porter’s son, Milo, is a litter ripper on the backyard pump track. He even found a few spots to show off his air skills. 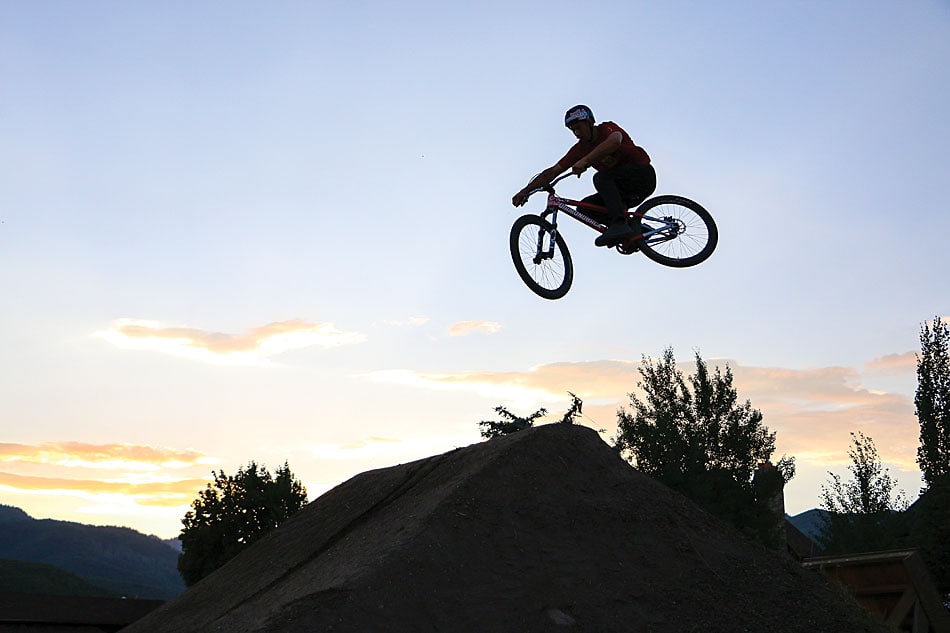 Sending it till the lights go out: It’s easy to see that Eric Porter gets a lot of enjoyment from riding his backyard jumps. While we were at his house, he kept a huge smile on his face all the way up till the sun went down.

Be versatile with your riding! The most important thing to me is to be good at everything, understand it and have fun. I love to ride trails the most, but I also love to dirt jump, ride downhill, ride road, ride trials; it’s all awesome, and they all complement each other. That way you will never be bored with your local trails or riding. Push yourself a bit too. It’s easy to fall into the routine of riding the same trail at the same speed, but give that hard-rock move a few tries one day, or the log hop, or hitting a corner without braking. Just try to grow yourself as a rider. It feels really good to accomplish something that is hard and you’ve had to work for.

Photo of the Day: Ryan Egusquiza