30 Years Ago in Mountain Bike Action 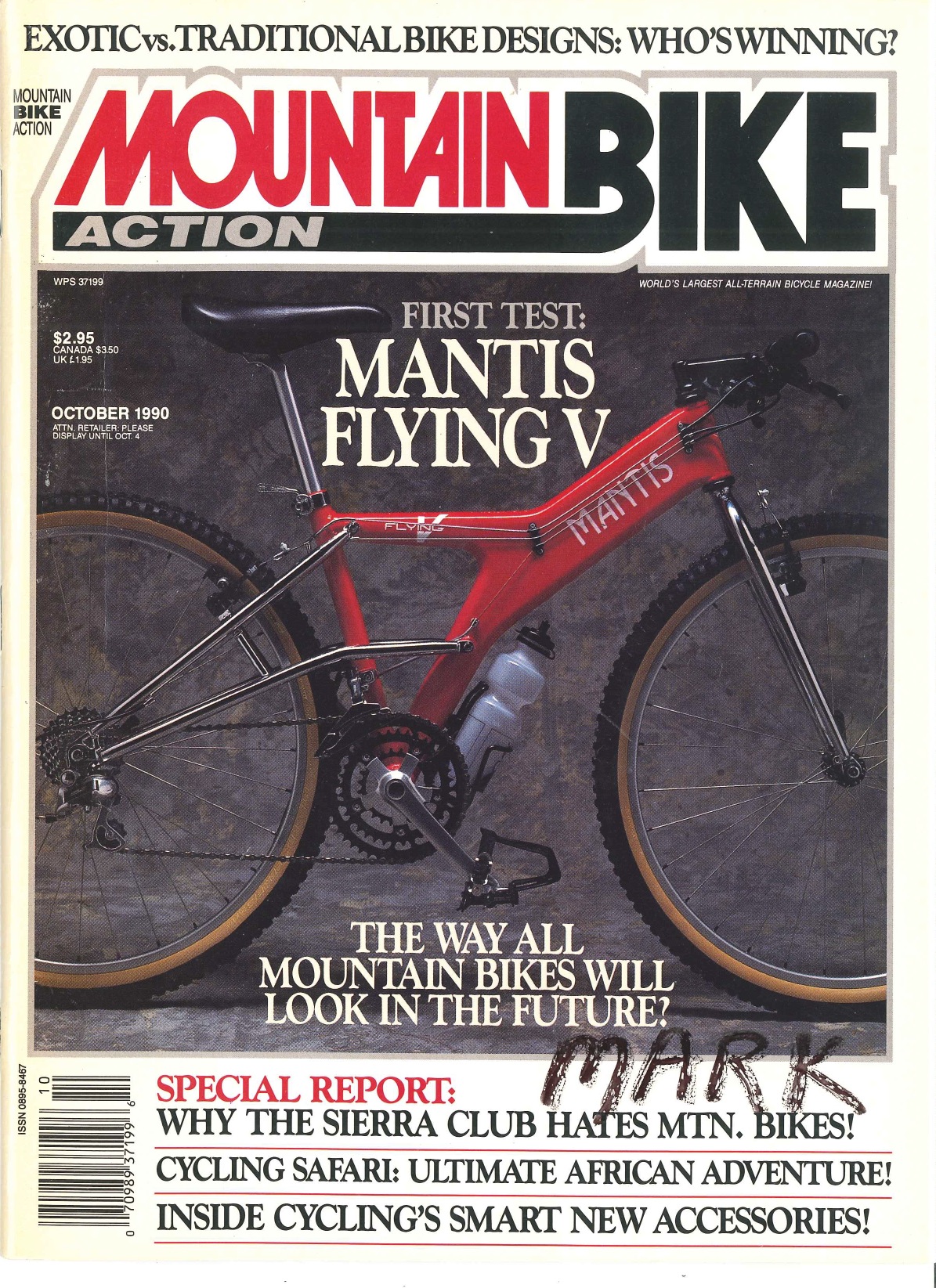 Mantis founder Richard Cunningham was never afraid to challenge the norms of bike design, as could be seen with his innovative Mantis Flying V frame.

By the way, if you wonder why the name “Mark” is written on the bottom half of the above cover, it’s because long-time MBA advertising salesman Mark Thomas put his name on his copies of the magazine so that no one else would take them off his desk when they were looking for a particular issue.  Mark left Hi-Torque Publications a number of years ago, but he left this copy of our October ’90 issue of MBA with us, and it’s the cleanest copy we’ve got now, despite having Mark’s name emblazoned on the cover. 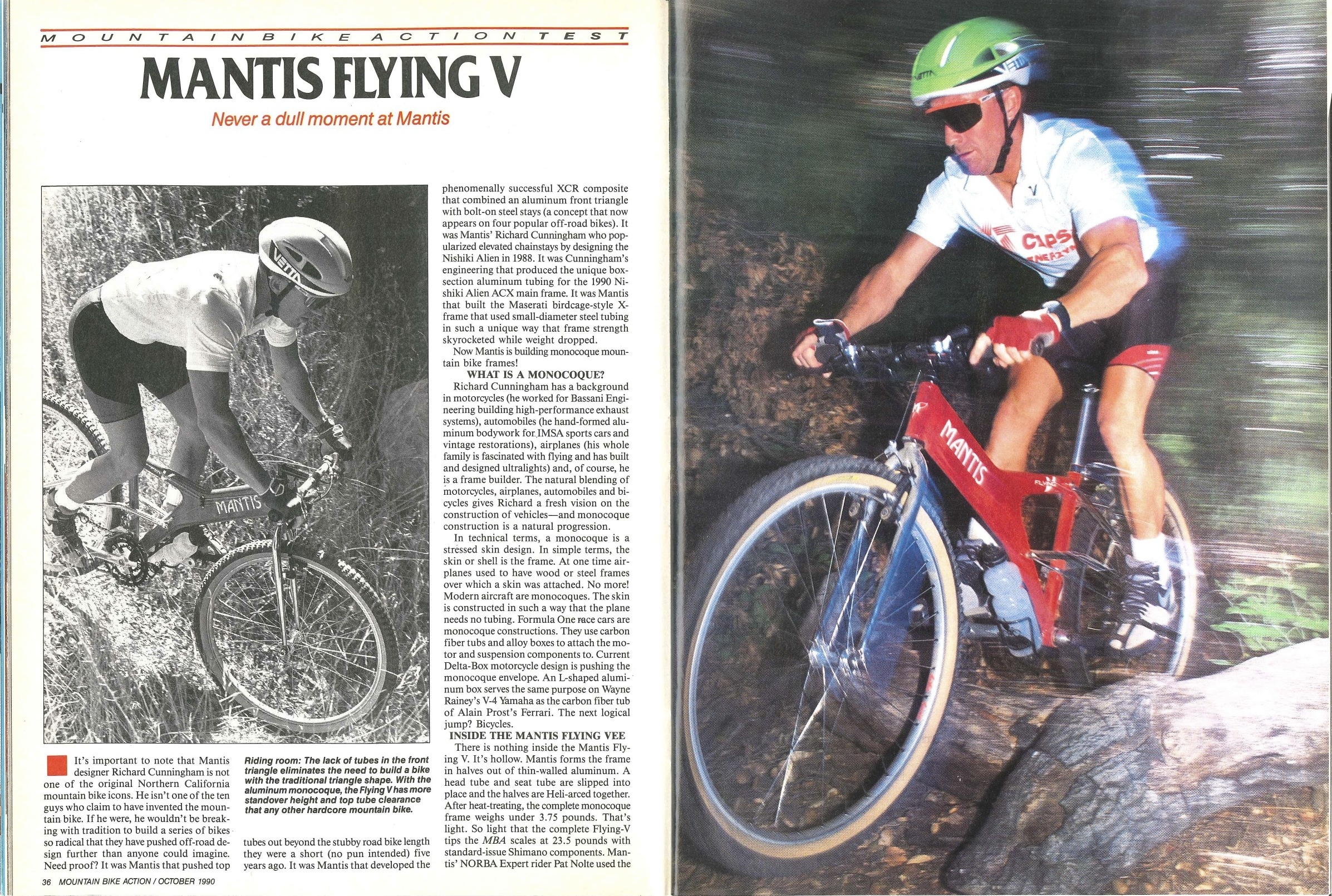 Jack Phinn did the riding for our photo shoot with this bike test, but Jody Weisel did most of the testing of the Mantis Flying V and wrote the review  of the bike for us.  A collegiate road cyclist and one of America’s early professional motocross racers, Jody had become an avid mountain bike rider in the 1980s and ’90s. Even though Jody was doing a fair amount of the editorial work on Mountain Bike Action in the early years of MBA,  he was still racing motocross every weekend and editing Motocross Action at the same time. 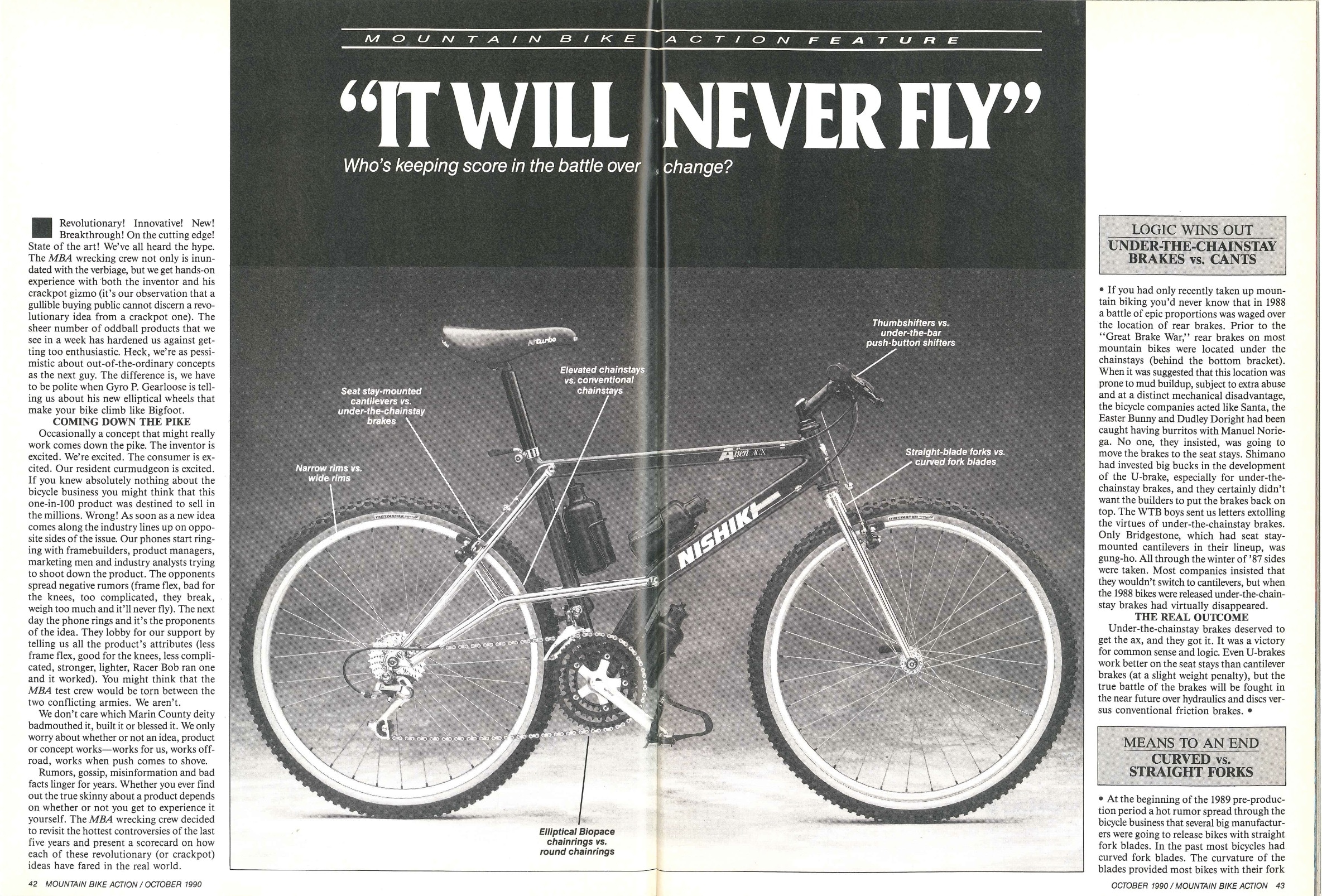 Future MBA editor Richard Cunningham also came up with the design for this Nishiki mountain bike. The elevated chainstays caused a sensation in the mountain bike world. 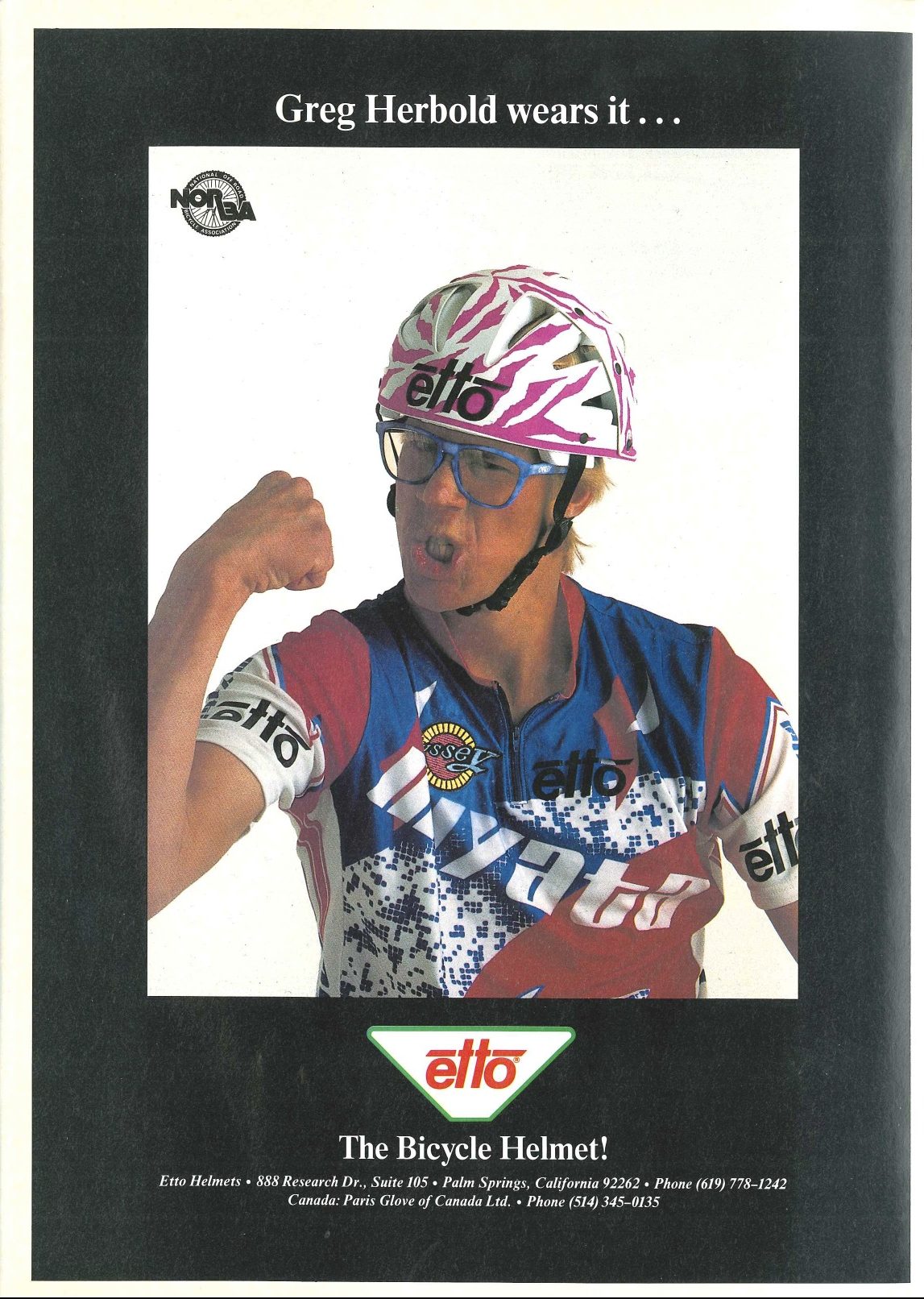 We wrote an interesting column about the rule changes for mountain bike events that were being initiated by the UCI for the Mountain Bike World Championships. That’s Greg Herbold on the right-hand page. He was one of the first riders to race with Rock Shox forks, which he used in his  win of the first UCI Downhill World Championship title in Durango in 1990. Herbold’s toughest rival, John Tomac, started racing with front suspension in 1991, using Manitou forks. Downhill racing was never the same after that, as all the top downhill riders were soon using suspension in both the front and rear of their bikes. It was after that development that most top-level racers decided to choose between cross-country and downhill, since it was too much trouble for most riders to take two different bikes to their races when they were usually better at one kind of racing than the other.  John Tomac was one of the key exceptions to that rule, being one of the best riders in the world at both disciplines. Lisa Muhich was one of the top women who excelled at both, too, winning both downhill and cross-country events at the highest level of the sport. Tomac is the only male rider to ever win multiple World Cup races in both XC and downhill, although Norway’s Rune Hoydahl won one downhill World Cup event and multiple XC World Cup races. Tomac also won multiple national titles in the U.S. in both cross-country and downhill. 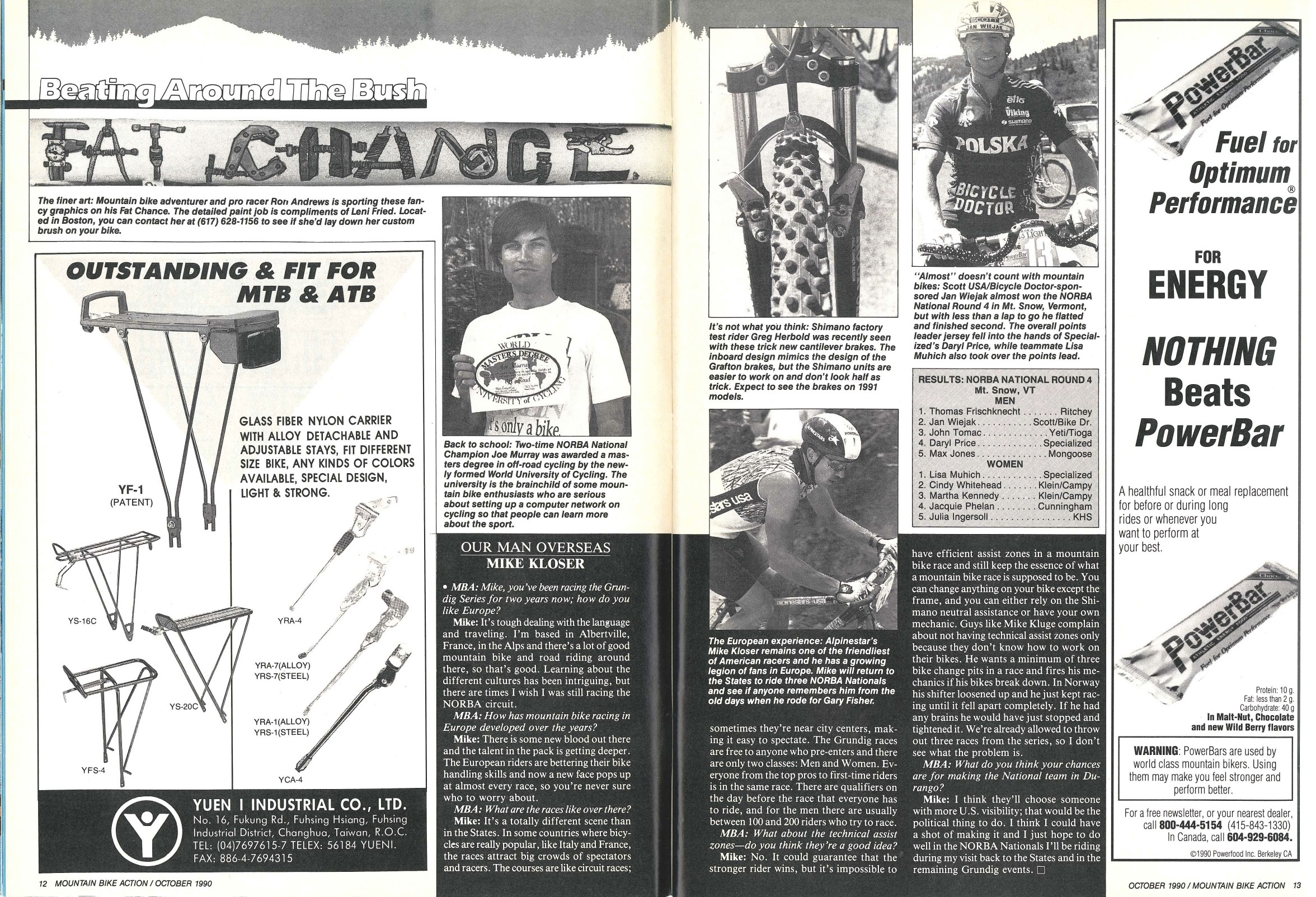 Our “Beating Around the Bush” section covered a variety of topics. If you check the race results, in the middle of the right hand page here, you’ll see that Switzerland’s Thomas Frischknecht beat America’s top riders in the NORBA National at Mt. Snow, Vermont.  He became the top World Cup rider of the 1990s in the years ahead. Check out the ad for PowerBar, too. Energy bars are so common today that we don’t think much about them, but they were still pretty new in 1990.