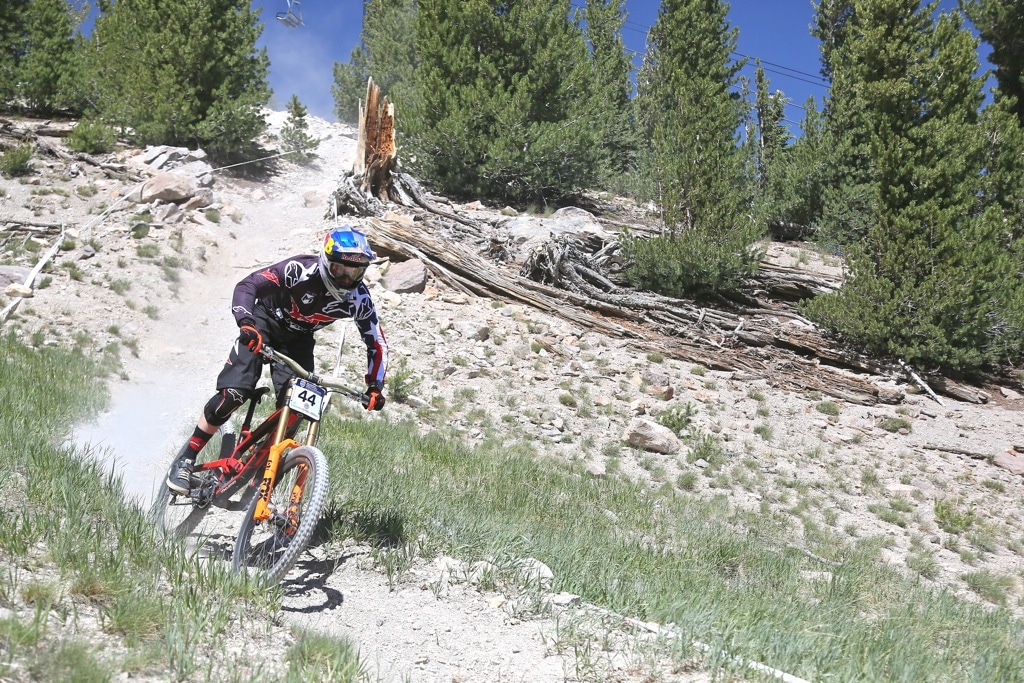 We’re going back three years with this shot of Aaron Gwin at Mammoth Mountain, California, from the Downhill National Championships in July 2016. Gwin has won the U.S. national downhill title eight times in the last 10 years (2009, 2010, 2012, 2013, 2014, 2015, 2016, 2017) and the World Cup overall downhill title five times (2011, 2012, 2015, 2016, 2017) . He’s hoping to add another national title to the record books this year and possibly his first World Championship gold medal. Unfortunately, Gwin had some bad luck this past weekend when he hit a tree with his shoulder in practice on the morning of the World Cup downhill race at Vallnord, Andorra, on Saturday. Gwin pulled out of that race and flew back to the U.S. for medical attention. According to Jeff Steber, the founder of Intense, Gwin’s main sponsor, Aaron’s shoulder was stressed but not broken. Nevertheless, Gwin will not be competing in the World Cup race at Les Gets, France, this coming weekend. However, he is expecting to heal up enough to compete in the U.S. National Downhill Championships in Colorado in the next few weeks. After that, Aaron will reportedly be focusing on the upcoming UCI World Championships at Mont-Sainte-Anne, Canada, and the World Cup finals in Snowshoe, West Virginia. After that, Gwin plans to compete in the U.S. Open downhill event at Big Bear, California, in mid September.  (Photo: JK/Mountain Bike Action)