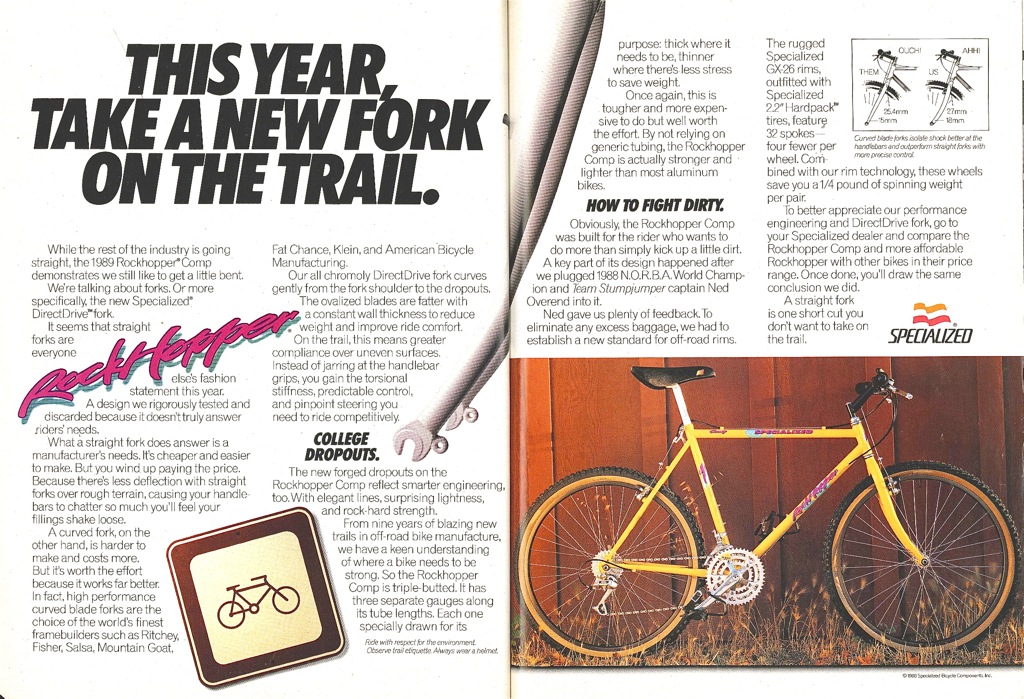 Paul Turner hadn’t come out with the first Rock Shox suspension fork yet when Specialized came out with its Direct Drive fork, shown here as it was advertised in our February 1989 issue of Mountain Bike Action. The curved fork design allowed the fork to flex when it hit rough sections of trail, smoothing out the ride. Of course, once suspension forks entered the market, not too long after this ad appeared, curved forks were largely forgotten in the mountain bike world. If you read the ad, you’ll see that it says:

“It seems that straight forks are everyone else’s fashion statement this year. A design we rigorously tested and discarded because it doesn’t truly answer riders’ needs.

“What  a straight fork does answer is a manufacturer’s needs. It’s cheaper and easier to make. But you wind up paying the price. Because there’s less deflection with straight forks over rough terrain, causing your handlebars to chatter so much you’ll feel your fillings shaking loose.

“A curved fork, on the other hand, is harder to make and costs more. But it’s worth the effort because it works far better. In fact, high-performance curved blade forks are the choice of the world’s finest framebuilders such as Ritchey, Fisher, Salsa, Mountain Goat, Fat Chance, Klein, and American Bicycle Manufacturing. . . .”

The ad goes on to cite Ned Overend, the “1988 N.O.R.B.A. World Champion” (a title Ned won two years before the UCI started hosting its own UCI Mountain Bike World Championships), for his input into the fork’s development. Read the entire ad if you have the time. It’s clever, interesting and informative.