Back in the late ’80s and early ’90s,  the MBA wrecking crew would make the annual pilgrimage to the (then) sleepy, old mining town of Moab, Utah to partake in their annual Fat Tire Festival. From the Slickrock Loop to Poison Spider, and of course, the Porcupine Rim Trail, Moab’s plethora of rough trails was the perfect test bed for all the tide-turning full-suspension bikes that were beginning to arrive. 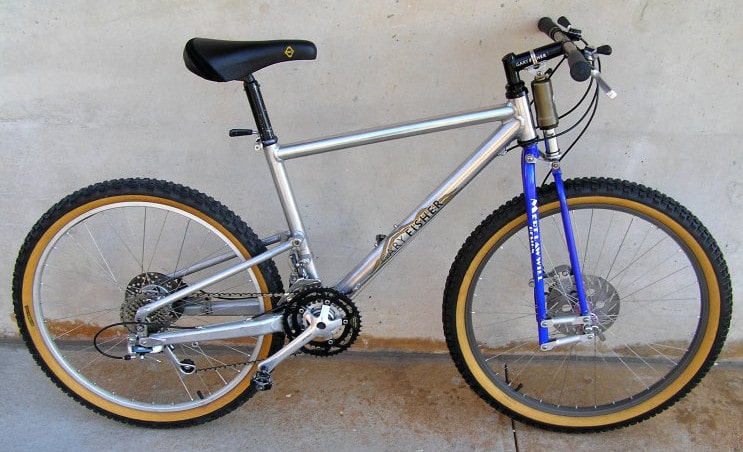 It was at the Moab Fat Tire Festival in 1991 that in addition to a Pro-Flex 752, a Boulder Intrepid, and a wild handmade GP Cycles RAD 1, we also brought a Gary Fisher RS-1 (above) out to play. Given the early state-of-play in mountain bike suspension technology, there was only a smattering of Rock Shox and Manitou forks to be found and most everyone was still riding fully rigid bikes.
A DOSE OF MODERNITY 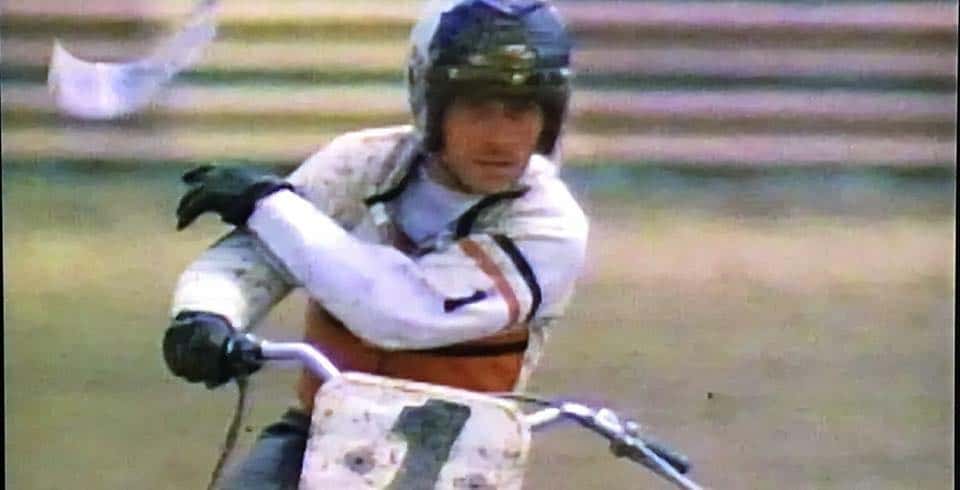 The Gary Fisher RS-1 was certainly unique, and it stood out with its fanciful front and rear Mert Lawwill-designed suspension. Mert (above) was of course the 1969 AMA Grand National Champion made world famous for his starring role in Bruce Brown’s epic moto-movie, On Any Sunday. 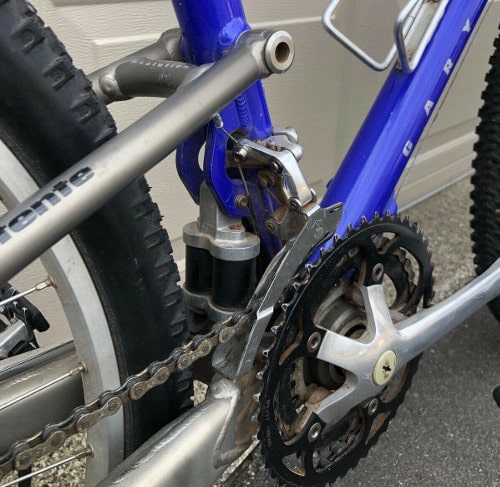 The rear end started with a hand-fabricated box-section aluminum swingarm and was based on Lawwill’s own quadrilateral linkage design that provided a whopping two-inches of travel (via tunable urethane bumpers borrowed from a skateboard).

The front-end duties were handled by an early steel version of Mert’s own Leader fork that used a Risse air shock providing three inches of travel. By the following year Control Tech would purchase Mert’s fork and produce a beautifully crafted aluminum version. 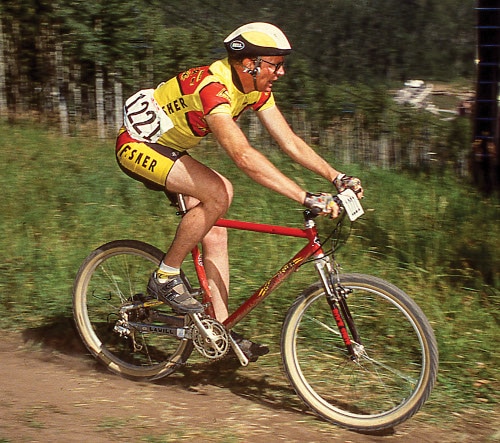 I had actually first ridden an RS-1 the year prior at the UCI Mountain Bike World Championships in Durango when I “borrowed” Gary’s personal bike after it was left unattended at the Campagnolo truck. Gary (above) was running a Rock Shox fork and Phil Wood tandem rear disc brake on his RS-1 and raced it in the downhill that weekend (arguably making him the first person to ever race a full-suspension mountain bike).
THAT MOAB MAGIC 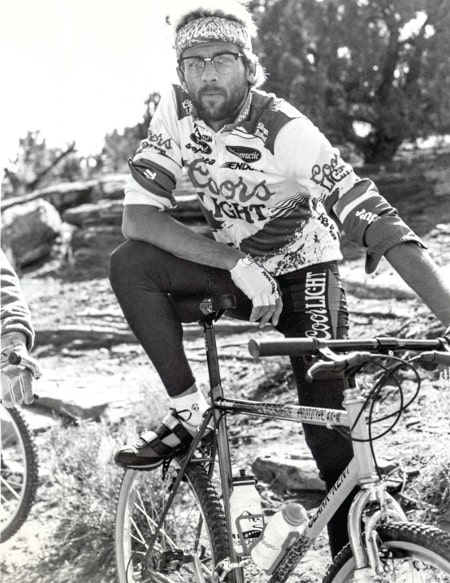 As was our daily ritual at the festival, a small bike industry collective would meet at Rim Cyclery in the morning to plan the day’s ride. On this particular day we shuttled to the outskirts of town where a group of over a dozen riders had collected. Among them was ’84 Olympic road race winner Alexi Grewal (above) who surprised everyone by showing up on a “prototype” steel Clark-Kent hardtail with a Scott Uni-Shock fork. What was soon to ensue was a high-speed duel through the Utah desert where modern mountain bike technology – though still in its infancy – would win out.
Though somewhat intimidated, just as the group readied to drop-in, I snapped one quick photo of Alexi while he relaxed in his Coors Light kit sans helmet. As soon as we rolled, Alexi took the lead and a string of riders followed behind down the challenging singletrack. It didn’t take long for Alexi and I to gap the group, he relying on his fitness and handling skills, me on the merits of full suspension and disc brakes with a dash of motocross skills and audacity to stay on his rear wheel.

As the trail got rougher with a succession of rocky drop-offs and stutter bumps, Alexi was forced to slow given the limits of his bike.  I on the other hand was able to exploit the benefits of both suspension and disc brakes to surge past and promptly drop him! For me, this was yet another clear example of the impact that motorcycle inspired technology could and would have on a mountain bike. Thanks, Mert!

Funny thing, but fast forward some 30 years later and here I am still arguing with many cyclists about the merits of disc brakes and suspension on road/gravel bikes. How does that old saying go; “The more things change, the more they stay the same” 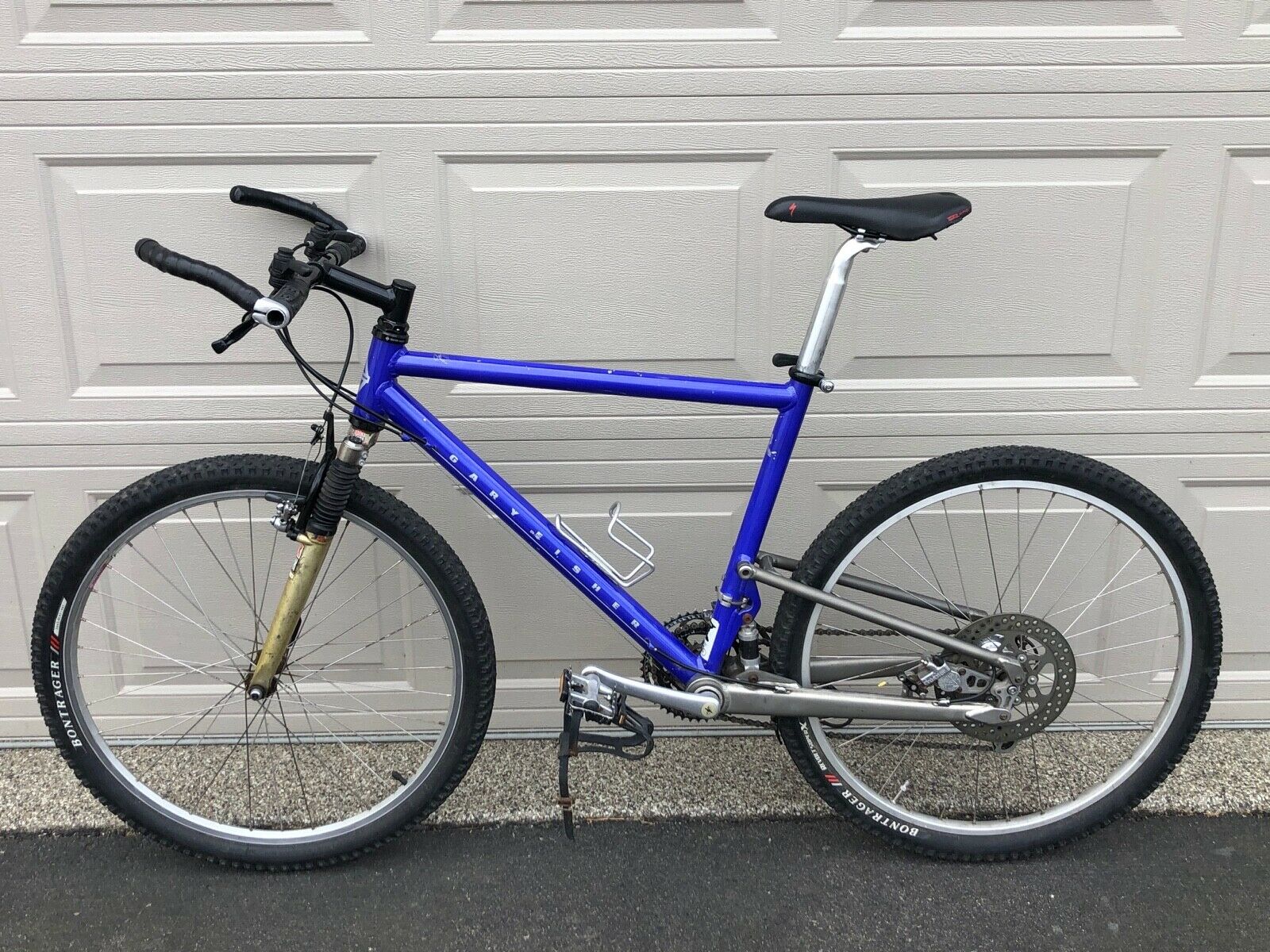