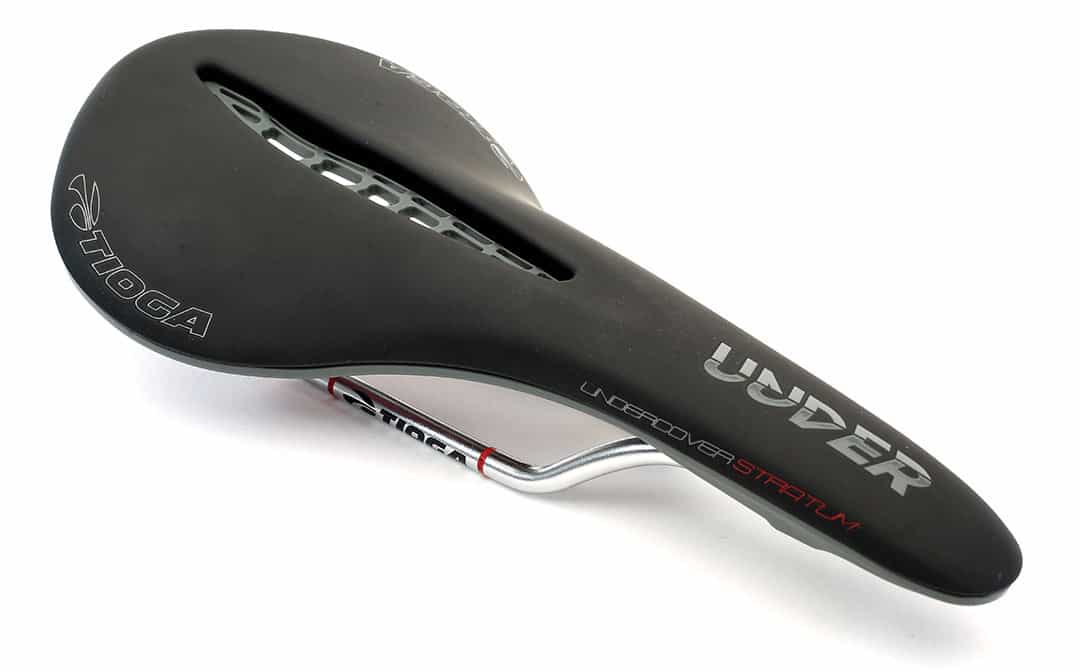 Tioga decided to reinvent the saddle by ditching tradition and coming up with a unique style. It’s likely you’ve seen one of Tioga’s ultra-lightweight Spyder saddles, which feature zero padding and a flexible spiderweb-like design that Tioga believes is far superior to a hardshell that relies on a thin layer of padding for comfort. Tioga offers a few different models of Spyder saddles that all share a similar concept; however, Tioga’s latest saddle looks to blend Tioga’s innovative design with traditional padding. We’d like to introduce you to the all-new Undercover Stratum.

Tech features: The Undercover Stratum builds off the Spyder Stratum, a saddle currently available in Tioga’s lineup. This new saddle uses a similar Carbonite SpyderWeb base but combines it with Tioga’s Bio X-pad, which is constructed from a mid-density foam. These features provide riders with the same shock-absorption characteristics of Tioga’s current Spyder saddles while also offering more comfort due to added padding. The Undercover Stratum features a ThermoForm synthetic cover that is vacuum-fit for a seamless finish and is durable in all weather conditions. The saddle can be purchased with a white or black cover and either carbon or chromoly rails. The carbon option is recommended for road use and sells for $200. The chromoly-railed version that we tested here sells for $120 and tipped our scale at 200 grams.

Field test results: We mounted the Undercover Stratum to one of our test bikes, and after spending some time dialing in the tilt as well as the fore and aft position, we were ready to hit the trails. The Undercover Stratum has a more inviting look than Tioga’s non-padded saddles and measures 140 millimeters wide, which is 5 millimeters wider than the Spyder Stratum. If you push down on the Undercover Stratum with your thumbs, you will quickly notice this saddle offers a lot of flex, but in a seated position it doesn’t feel unnatural. In fact, our test riders quickly forgot about the saddle, even after being on it for a few hours. The Undercover Stratum shines during rough, seated climbs, but we wouldn’t say it’s a complete game-changer. We would, however, say that this saddle is comfortable and has the ability to absorb trail chatter while still being stiff enough to provide pedaling efficiency. If you’re on the hunt for a new saddle and were hesitant to try Tioga’s unconventional design before, we recommend you give its new Undercover saddle a go.

• Not as affordable as other saddles on the market

• Too flexible for some riders

Photo of the Day: Out of the Ashes