Just like Spinal Tap’s amplifiers, the annual Tour de Tryptophan is taking it to 11 (years, that is…) with a fun ride/fundraiser to help So Cal Trail Riders’ “Moose”, aka Brad Rasmussen, who suffered a spinal cord injury up at the Bike Park in Big Bear on July 3rd.

Rasmussen, who like last year’s recipient, BMX Superstar Eddy King, is a Real Estate Agent (for Century 21, btw…) has limited movement in his legs and feet, and is determined to walk and ride again as soon as possible. 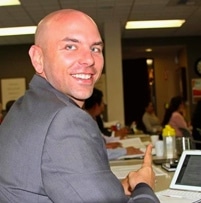 “My friend Mike Franze from Fullerton Bikes called me up earlier this year to see if we had a recipient for the 11th Tour de Tryp, and I said no” comments Steve Boehmke, who’s been riding this event since the beginning.

“He told me about Brads situation, so I called Brad up, and found out, WOW! this guy is motivated and ready to do whatever it takes to get back on the bike. As we were talking, he pointed his phone down to his feet and showed me that he was pedaling a little bike simulator that you would put under your desk at work to burn calories. He Strava’s his walks around the block – 1 mile in 1 hour was one I saw. Brad is on fire, and on a MISSION, with a long way to go.”

Similarities between he and Eddy King run deep. Both he and Eddy are in the Real Estate business, both of them got injured in the bike park at Snow Summit, and Eddy is now riding a townie on the streets, which brings great motivation to Brad and other spinal cord injury survivors.

Eddy said he may be able to make it to this years’ start, which will be a great treat for all that contributed a little to his cause last year. Franze brought King and Rasmussen together via Facebook earlier this year. MTB Superstar Tara Llanes was also the recipient of donations from the Tour de Tryptophan, bringing a trend of Spinal Support to the cause.

It was already decided that Spinal Tap’s “11” would be the theme of this year’s shirts. When we spoke to Brad, he mentioned he was a fan of the band Suicidal Tendencies, and especially their song “You Can’t Bring Me Down.”

So both themes were incorporated into the commemorative shirt, which will be available for a donation of $40 or whatever you feel you can afford at the event. 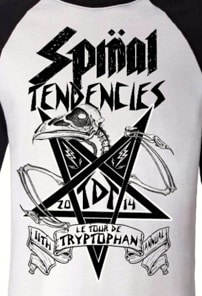 WANT TO SUPPORT THE CAUSE BY BUYING A SHIRT?

If you’d like to buy a shirt to help Brad but can’t attend, please send $40 to [email protected] at paypal, and mention Brad, and specify your size (XS through XXXL) before this Friday, November 25th.

WANT TO REALLY SUPPORT THE CAUSE?

Enlist Brad as the Agent on your next house purchase… you can see what he’s about at: Brad Rasmussen Century 21 Allstar! You know you want a house that rolls out to the loop, don’t you?

WHAT’S THE FULLERTON LOOP?
The Fullerton Loop is an 11.5 mile suburban mountain bike ride that links abandoned railways with horse trails, through neighborhoods and parks, with “extra credit” singletrack sections throughout… Mountain Bike legend Richard Cunningham mapped the loop out when he started Mantis Mountain Bikes in the early 80’s. Now thousands of people ride it weekly for training and fun…

The Tour de Tryptophan is a fun ride where we celebrate the loop, our friends, Thanksgiving and raise a few dollars for someone in need. There are no rules, it is put on by no one, and you are completely responsible for yourself at this non-event. 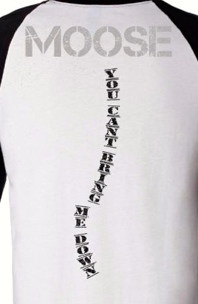 WHEN?
We meet at 11am on FRIDAY after Thanksgiving, and the fun ride goes from Noon FRIDAY until Noon on SATURDAY. We don’t care if you ride one lap, twenty laps, or no laps. Just come out and have a good time. The current record is eighteen laps (207 miles!) held by Jim Cooke, who’s son Alan Cooke is another BMX honch, and whose mother Juanita Cooke the trail is named after! Oh, and did we mention he’s in his 60’s?

WHERE?
The Fullerton Loop is located on Berkeley Avenue, West of Harbor Blvd. We meet in the upper lot of the Courthouse parking.

BENEFIT
As mentioned, this year’s beneficiary will be Brad Rasmussen. A Donation of $40 gets you a commemorative T-Shirt with the artwork above, and we will have other cool items for sale as well. A limited amount of shirts will be available at the event, and we may do a second run if there is demand.

DONATIONS
If you would like to donate items for prizes, contact Courtney Chambers at 949.903.5353 and ship them directly to 414 N. California St., Orange, CA 92866. Please do not require signature.

You can also donate by sending funds to [email protected] via paypal, refer to “TdT”  and call Courtney at the number above if you have any questions.