Designed Specifically for a Trail Near You 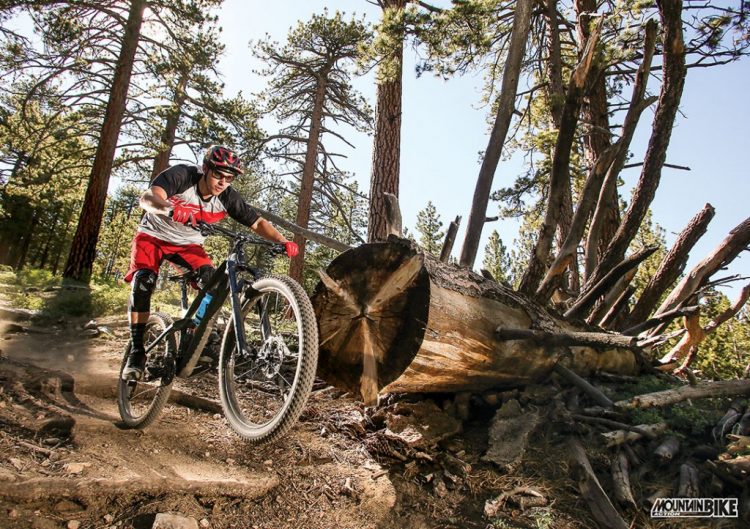 It’s not often a company revamps its entire lineup in just one year, but if there’s one company that can do it, it’s Trek. Trek Bicycles was established in 1976 when just five employees built over 900 frames in a southern Wisconsin barn during their first year of business. Fast-forward to today and Trek is among the most recognized bicycle brands in the world. Trek’s constant push for innovation has kept them at the top of the game and has allowed them to continually build bikes more versatile and capable than ever before. At the beginning of 2017, Trek showed off just how hard the company has been working by debuting a complete update to its mountain bike line. We’ve had the chance to test and ride all of these new bikes now and can easily say that Trek’s hard work and dedication have paid off. The all-new Remedy was tested in our November 2016 issue, and the enduro race weapon, known as the Slash, was tested in our June 2017 issue. We would like to say we saved the best for last, but that’s not exactly true. Those bikes are both awesome for their intended purpose, but for the average trail rider, the all-new Fuel EX is second to none. 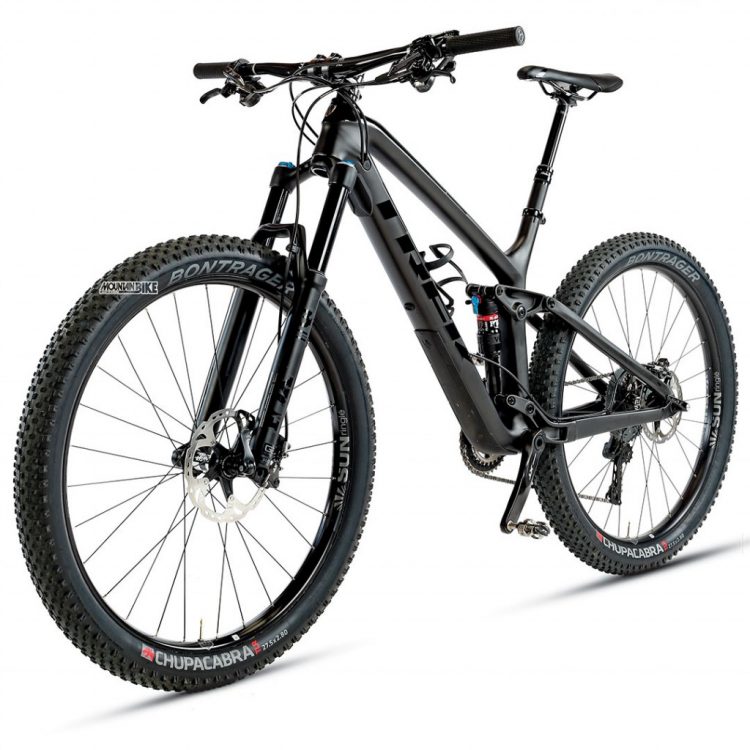 The Fuel EX is designed for the rider who wants a do-it-all bike. This rider will likely value a machine that is able to balance climbing performance with downhill prowess. This rider will also be one who likes to adapt the bike to fit his or her needs. The Fuel EX is sold with either 27.5-plus-inch wheels or 29-inch wheels. A rider can swap between these wheel sizes; however, the plus model is sold with a fork that has an extra 10 millimeters of travel. Riders can make further geometry adjustments to the Fuel EX by flipping the Mino Link chips in the rear linkage. 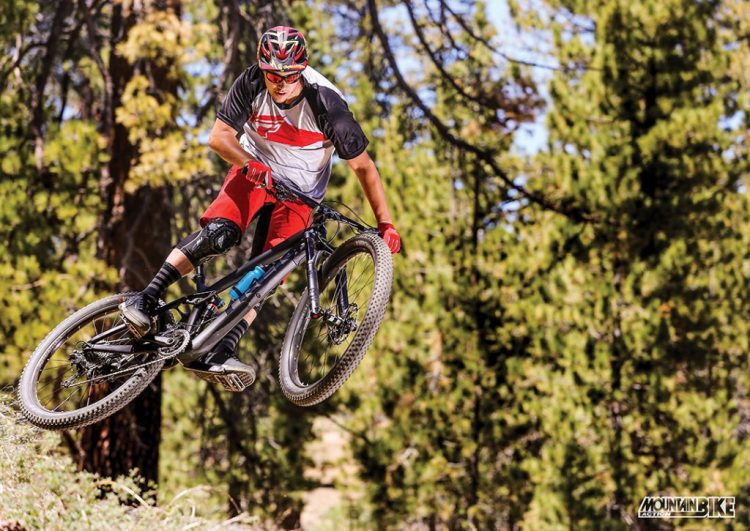 The Fuel EX is constructed with OCLV Mountain Carbon and has aluminum chainstays. This bike has Boost hub spacing, internal cable routing, frame armor and a Straight Shot downtube. The straight downtube design is said to increase stiffness but requires a Knock Block steering stop to prevent the handlebars and fork from being over-rotated and contacting the frame. Trek used its Full Floater suspension design with an EVO link and an Active Braking Pivot, along with a custom-tuned Fox shock with RE:aktiv technology. The 27.5 Plus model has a Fox Performance fork with 140 millimeters of travel in front and 130 millimeters in the rear. 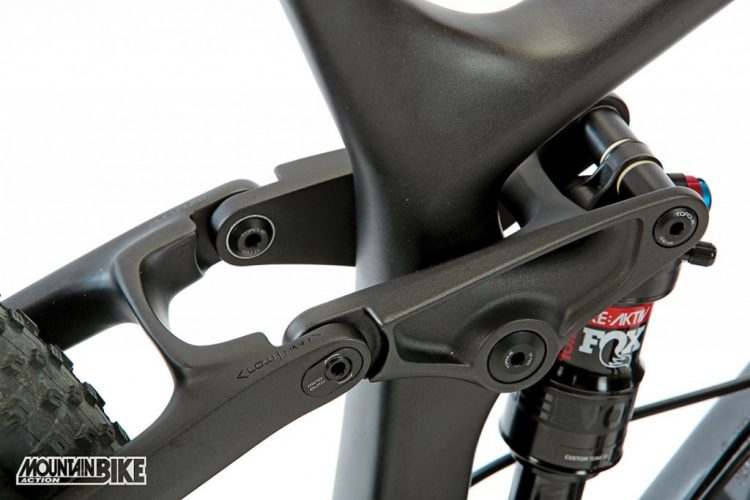 Our test bike’s stand-out components included a Shimano 2x drivetrain, Fox suspension and the option of two different wheel sizes. The front derailleur is a dying breed, but Shimano has been pushing hard to keep it alive. Some riders may like having a second ring so they can quickly reach their low range, but many will find the simplicity of 1x is the only way to go. Fox makes some of the best suspension on the market, but its RE:aktiv shock is exclusive to Trek. RE:aktiv brings Formula 1 technology to a mountain bike platform. Last but not least are the high-volume tires and wide rims. Trek spec’d a pair of SunRingle Duroc 40 wheels with DT Swiss 350 hubs and a pair of Bontrager Chupacabra 2.8-inch-wide tires. The 29-inch version of the Fuel EX comes with Bontrager Line Comp 30 wheels and XR3 Team Issue 29×2.4-inch tires. 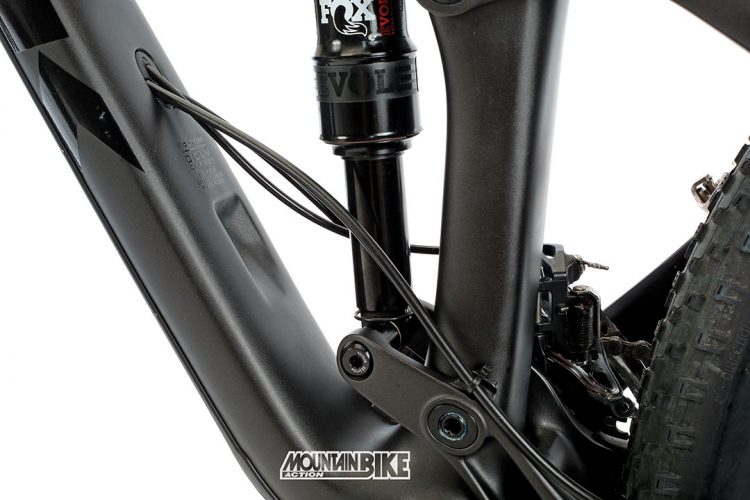 Suspension Setup: Dialing in the suspension on the Fuel EX was an easy process. The front and rear shock performed well with 20-percent sag, and we found our preferred rebound setting by doing back-to-back runs on a short section of trail. We turned our rebound knob till it was obviously too fast for our trails and then turned it back till it felt slow. From that point, we were able to quickly find a comfortable in-between setting.

Moving Out: The Fuel EX is built with a modern trailbike feel that enjoys climbing as much as descending. The cockpit, although a little cluttered, has a comfortable fit, and the Knock Block system, which prevents the fork from contacting the frame, is almost unnoticeable during a normal trail ride. We did, however, hit the steering lock a few times when riding tight, slow-speed switchbacks.

Climbing: Whether you point the Fuel EX up hill or down, it gets there in a hurry. The Fuel EX combines modern geometry with an efficient pedaling platform, allowing riders to quickly charge up their favorite climbs. This bike has a spirited feel and rewards every bit of effort a rider puts in. The Fuel EX with either wheel size is ready to go toe to toe with any steep climb at any time. 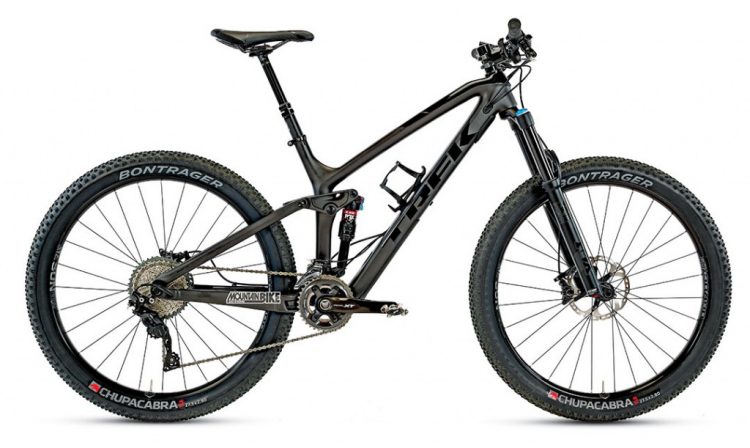 Cornering: Plus bikes have grown rapidly in popularity, because they give riders more confidence to rail turns. The Fuel EX, in its plus-sized trim, is no different. This bike’s wide tires and aggressive geometry beg for a rider who is willing to drift turns and blast out of berms. The Fuel EX with a pair of 29-inch wheels, however, has a more nimble feel and dives into the corners more easily. The Fuel EX features short chainstays, a low bottom bracket and a 67.2-degree head tube angle. This combination of plus-sized tires and long, slack and low geometry provides the Fuel EX with a fun and playful feel.

Descending: The Fuel EX races down the trail with confidence and stability. Our test riders enjoyed riding the Fuel EX on a wide variety of terrain—from flowy singletrack to gnarly rock gardens. The bike soaks up small bumps well and can easily handle larger hits from jumps and drops. We left the Mino Link in the high setting for the majority of our testing but found the low setting was great for riding trails with long and steep descents. 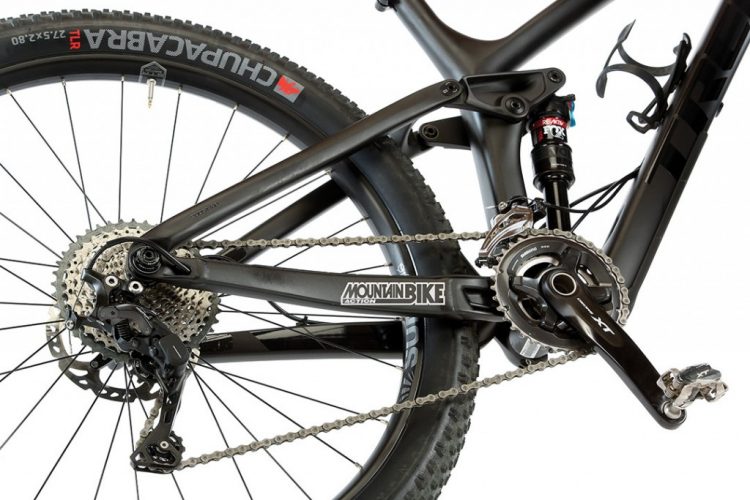 Our test bike came with a well-thought-out build kit and included nice parts, such as a carbon handlebar, a titanium-railed saddle and a full Shimano XT group. Some of our test riders would have preferred a 1x drivetrain as opposed to the 2x, but it’s not a deal-breaker. Due to the front shifter, however, our test riders had to spend some time moving the controls on the cockpit so they could be reached comfortably. We then decided to use some zip-ties to help manage our cables and give our bike a cleaner look. 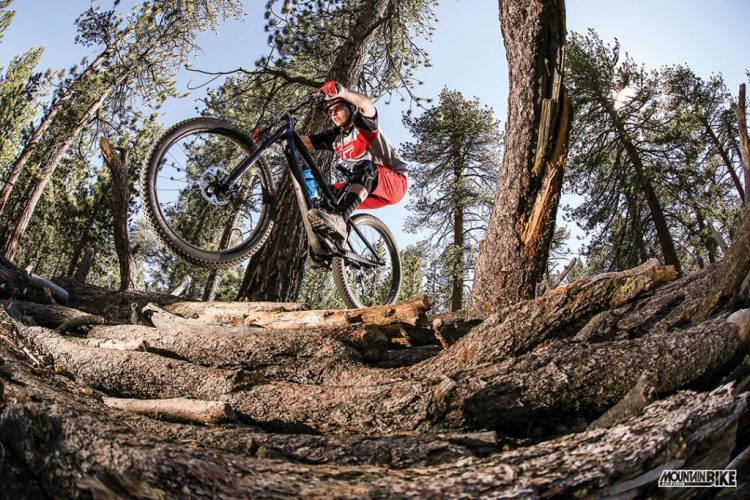 The Fuel EX 9.8 is sold with either 27.5-plus-inch wheels or 29-inch wheels. Both models are within a few hundred dollars of each other and feature an almost identical build kit. Riders looking for a bike that has a snappier feel will enjoy the 29-inch model, while riders who enjoy the added confidence plus-sized tires bring to the table will find the Plus model to be a more attractive buy. Both bikes can accommodate either wheel size; however, to achieve the correct geometry, riders may need to have the travel of their front fork adjusted. Regardless, the Fuel EX is a true trail ripper no matter which wheel size you choose. 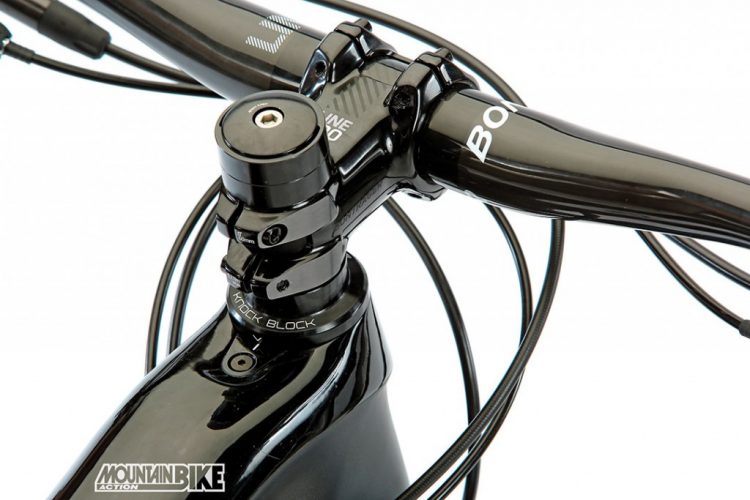 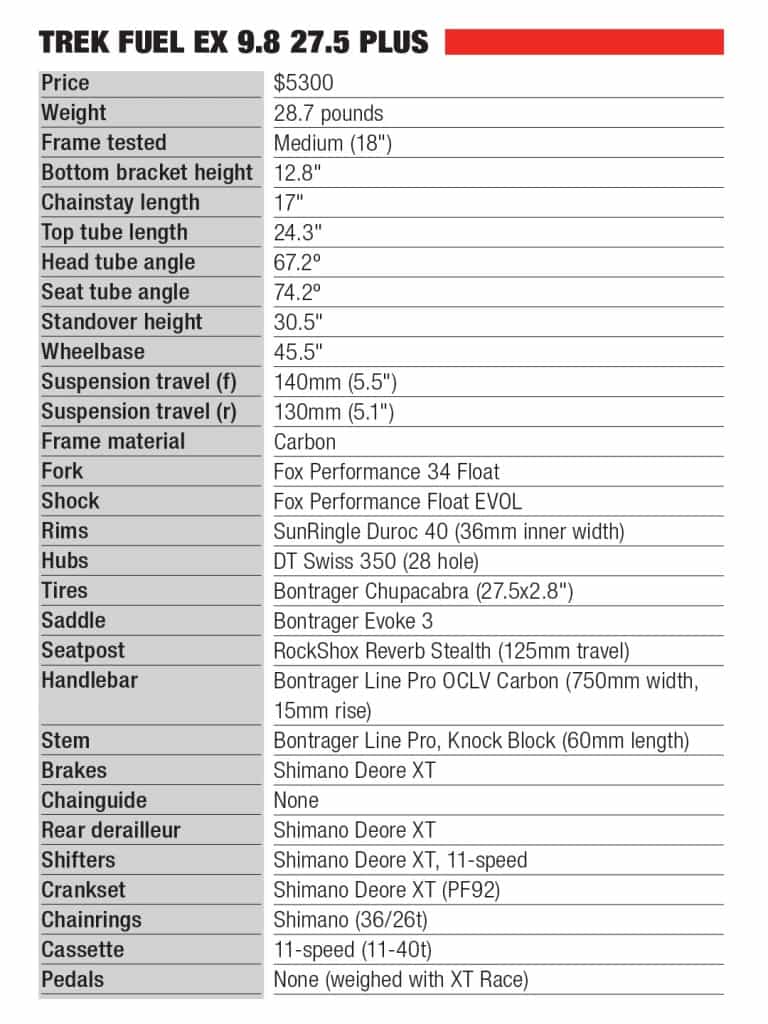 Photo of the Day: Brian Lopes

Warming Up For Rampage