MEET THE RIDERS AND THEIR RIDES 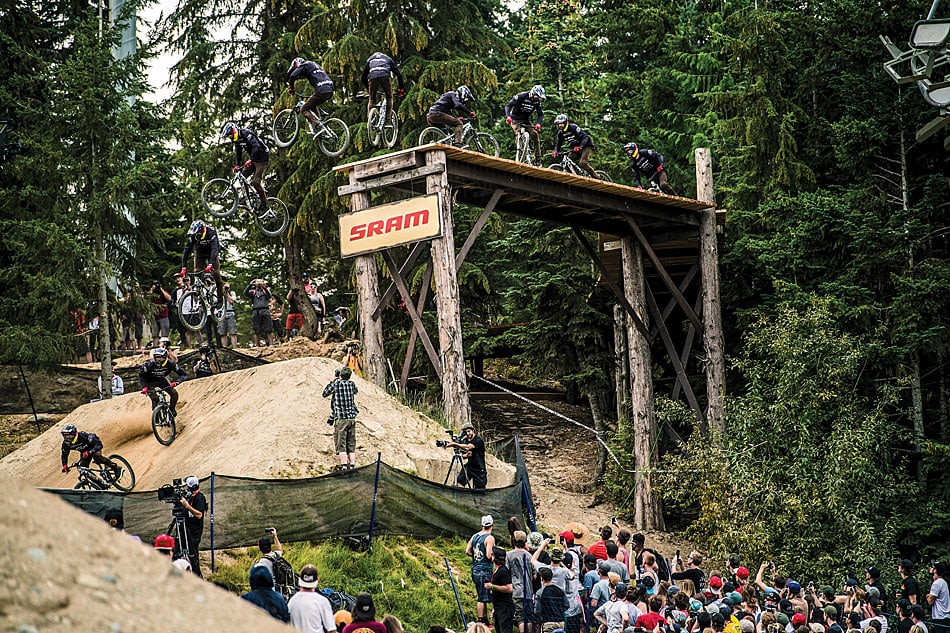 Top level: Brandon has won Whistler’s Red Bull Joyride competition (shown here) four times and the Red Bull Rampage twice. He uses two different bikes for the events. “There is almost nothing in common” Brandon says of the two bikes. “One is a slopestyle bike and one is a downhill bike.” Photo: Red Bull Content Pool

We first took serious notice of Brandon Semenuk’s riding skills when he was 16 years old. The year was 2007 and he was competing in that year’s Crankworx event in his hometown of Whistler, British Columbia. He was one of the youngest riders in the competition, possibly the youngest, yet he was unquestionably one of the best riders in the event and possibly our favorite to photograph. He was incredibly good, with amazing tricks and great style. He didn’t win, but he made the finals and placed third that year. In the years since, Brandon has gone on to become the top rider of all time in that event. Brandon has now competed in Whistler’s Joyride event nine times. He has medaled seven of those times, and he’s won four of those times (in 2011, 2013, 2014 and 2015)—the event’s only four-time winner. He is arguably the boldest, extreme mountain bike rider to ever come out of British Columbia, and that is saying something.

Trek decided to sponsor Semenuk almost 11 years ago. Here’s how they tell the story: “In 2006, Trek pro rider and North Vancouver local Andrew Shandro was at the Whistler dirt jumps with his young son. A 14-year-old Brandon Semenuk was there sessioning the dirt jumps. He was good beyond his years. He was also kind. He helped Andrew’s young son around the dirt jumps. Andrew talked with young Brandon and hooked him up with frame support from Trek. Ten years later, it’s still the best frame we’ve ever given away.” 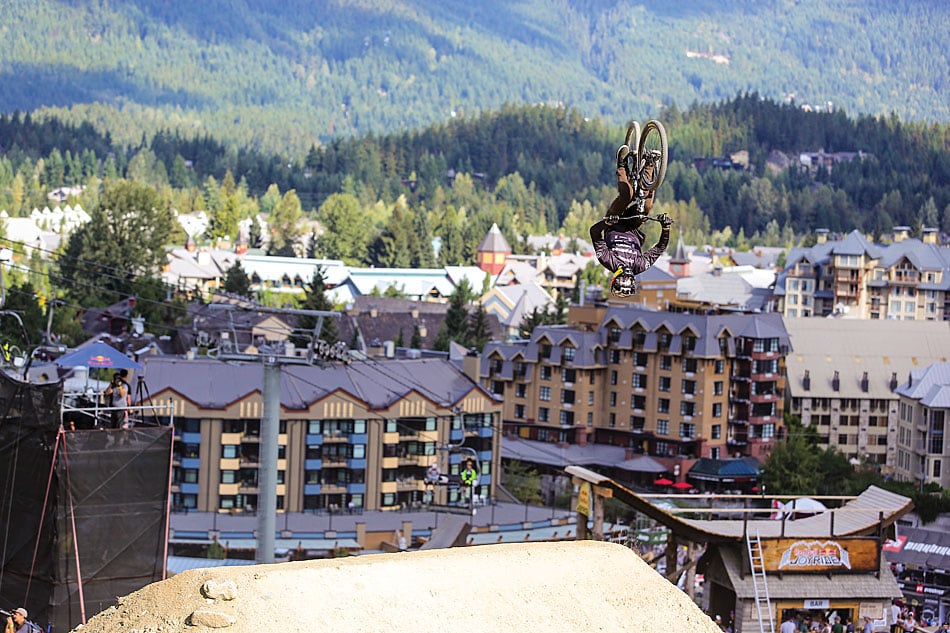 Backflip at Whistler: Brandon’s Trek Ticket S is built to survive big jumps and still be light enough to be “trickable.”

A year later, Semenuk was 17 when he was invited to compete in his first 2008 Red Bull Rampage. The Virgin, Utah, free-riding competition had been on hiatus for three years, so it was Brandon’s first chance at competing in the event. Despite his rookie status, he won the event, proving that he was already a world-class talent of the highest order.

It would take eight more years before Brandon would win Rampage a second time, in October of 2016. One of the things about high-risk riding is that things don’t always go perfectly, but Brandon has never let that stop him. Brandon keeps coming back to raise the bar higher.

Semenuk’s work for Trek goes beyond simply riding their bikes. He’s also involved in their development. “Brandon Semenuk has always been very in tune with his bikes,” says Trek. “His nuanced feel and understanding of bike geometry have helped Trek develop and refine new mountain bikes. The Ticket S is the competition slopestyle bike that Brandon Semenuk and the C3 Project helped create. For five years, the bike was not offered to the public; instead, it was a team-only edition frame. Every year subtle and not-so-subtle refinements to the bike were made based on input from Brandon and team riders. In 2013, the Ticket S was finally made available to the public.” 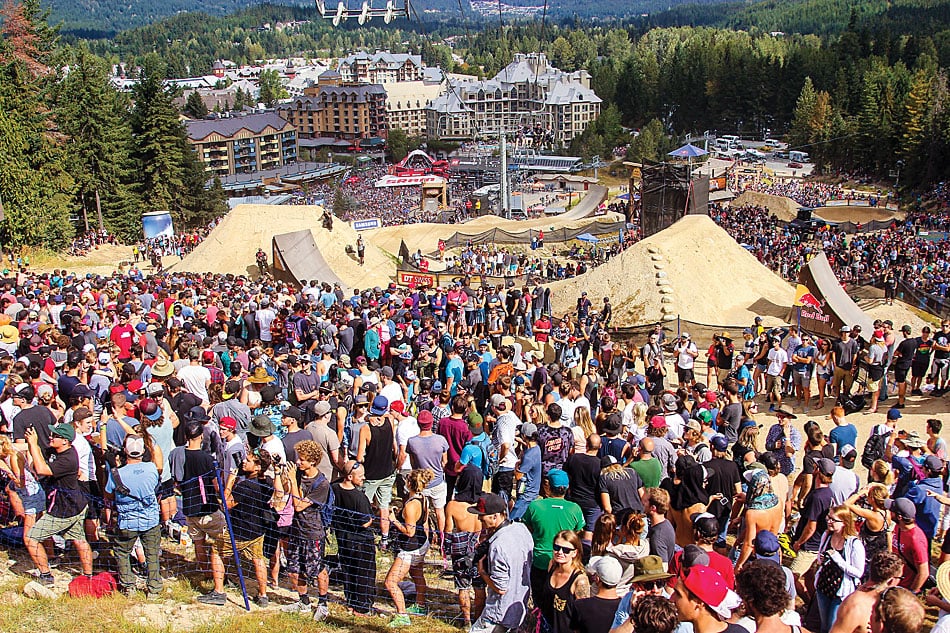 The crowd at Crankworx: Brandon grew up riding at Whistler Bike Park, so this kind of crowd at last summer’s Joyride competition is nothing new to him.

Brandon’s first film segment was in 2009’s “New World Disorder 9,” according to Trek. “In 2012, Brandon, Freeride Entertainment and Red Bull created ‘Life Behind Bars,’ a web series that chronicled Brandon and his friends’ unique mountain bike lifestyle,” Trek says. “Each episode was met with anticipation and brought the mountain bike community together. It became scheduled viewing for mountain bikers everywhere.” The series ran for three years. Brandon Semenuk may be the most celebrated freeride mountain biker in history. Turn the page to see how he sets up his bike.

MBA: How old were you? 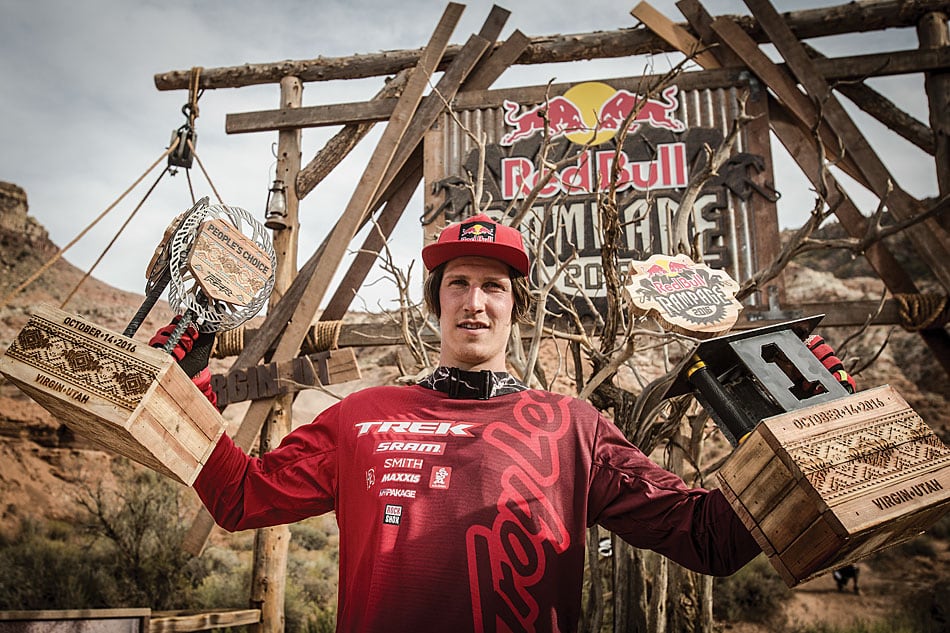 MBA: Did you win any titles as an amateur? If so, which ones?

MBA: What awards did you win in school (if any)? 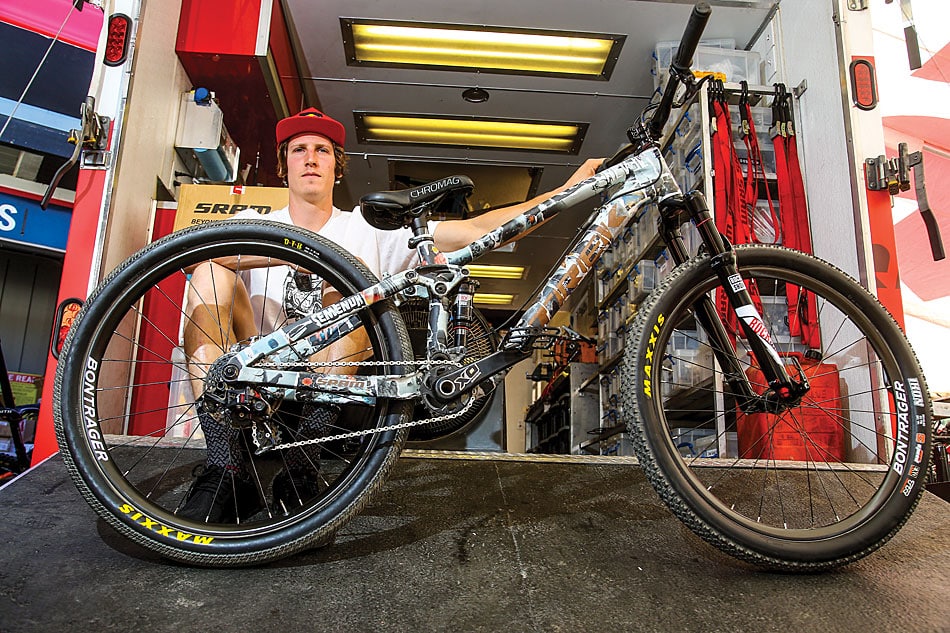 Brandon needs a bike that can handle huge jumps and big drops. He also needs the bike to be light enough for him to
do tricks like tailwhips, backflips, 360s and barspins with it. The bike has to be sufficiently light and maneuverable to do tricks, but it also has to be strong enough to survive the kinds of big jumps and drops that Brandon likes to do. The Trek Ticket S is sold only as a frame, not as a complete bike. It is aimed at a very select group of riders—ones who aspire to do the kind of riding that most riders only dream of doing, riders like Brandon Semenuk.