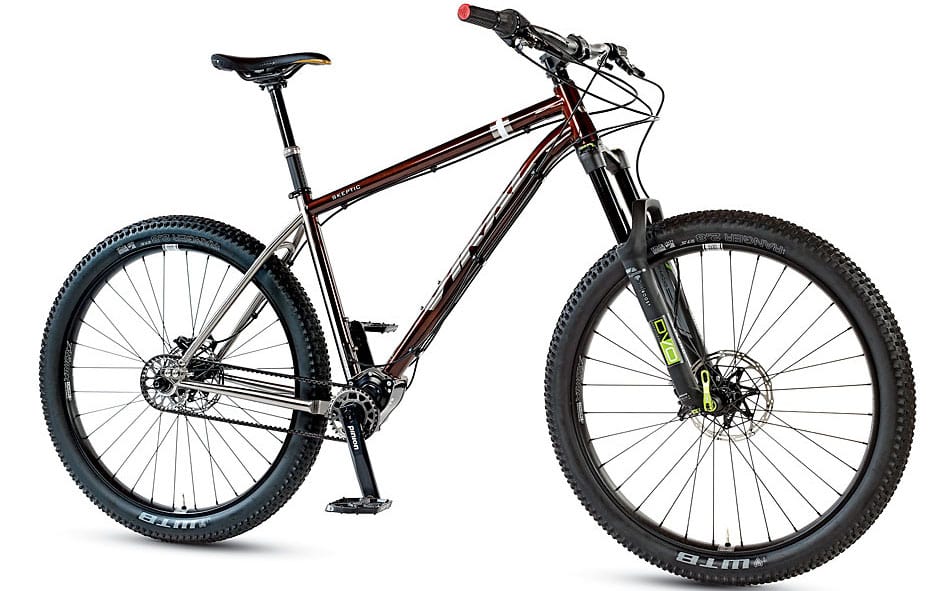 Viral Bikes is a new brand built from the ground up by a man who is no stranger to the bike world. It’s the brainchild of engineer Steve Domahidy who was the co-founder of Niner bikes, Factor road bikes and Domahidy Designs. He also built the CVA suspension design that Niner bikes still use today. When Steve sat down at the drawing board, he obviously wanted to create something different, as evidenced by the test bike we received. It’s not your typical hardtail. In fact, it’s about as far from typical as you could get without adding an electric motor.

Steve has some very simple, albeit lofty, goals. He wants to design bikes that address even the smallest concerns of every rider. That may be why Steve decided to chuck his derailleurs to the side of the trail and build a bike around what might be the most heavily engineered drivetrain system we’ve ever tested.

The Skeptic is the only bike currently available from Viral, but it’s designed to handle a huge cross section of riders’ needs. The hardtail frame is designed with a geometry that’s not quite cross-country but not quite enduro, either. It’s slack enough to handle some of the gnarlier lines on any trail but doesn’t give up any pedaling prowess thanks to the 0 inches of rear-wheel travel. That said, though, the bike is built with confidence-inspiring geometry and enough flex to keep it comfortable on long rides. 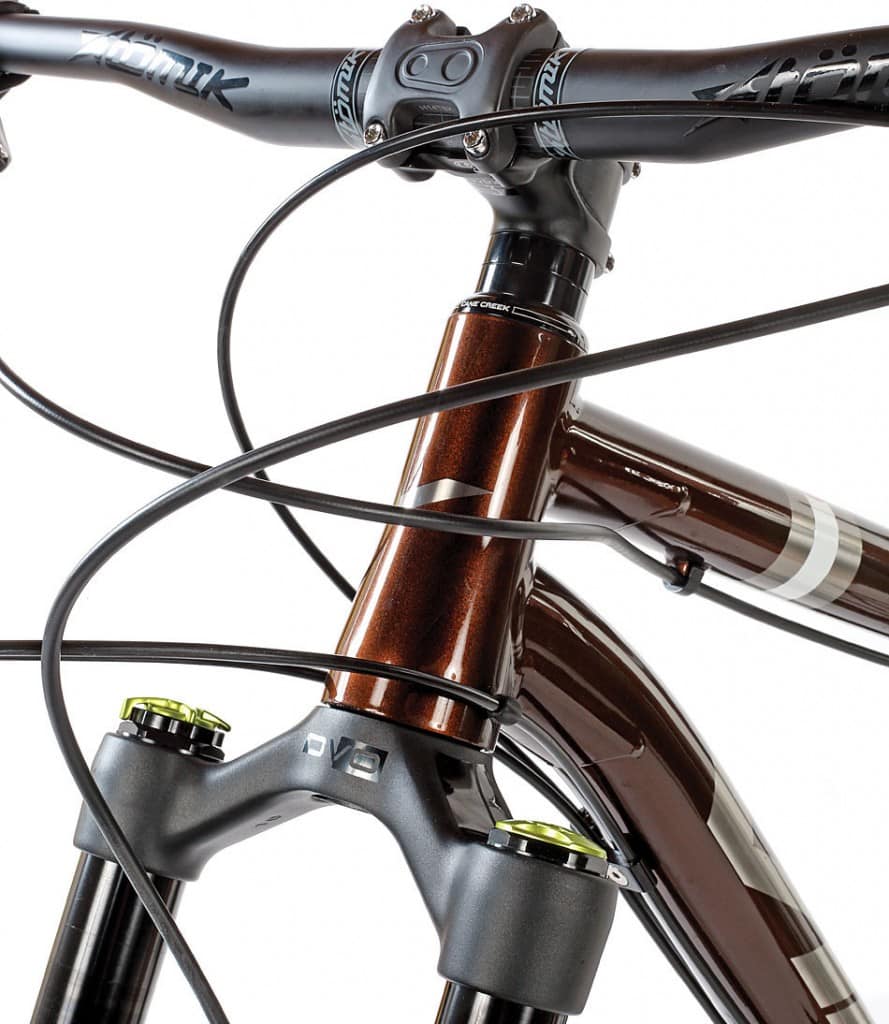 Attention to detail: Viral builds a bike with the same attention to detail as you’d find in a high-end, fully custom bike. They also build them in stock sizes, but don’t skimp on the trick little features that give it that cool factor.

Viral builds this frame from titanium, top to bottom. The bike comes with a custom-built plate where the crankset would normally go, with mounting hardware to mount the Pinion gearbox. With the Pinion transmission mounted, the bottom bracket is connected to a Gates belt-drive system, which resembles a single-speed setup more than a geared drivetrain. 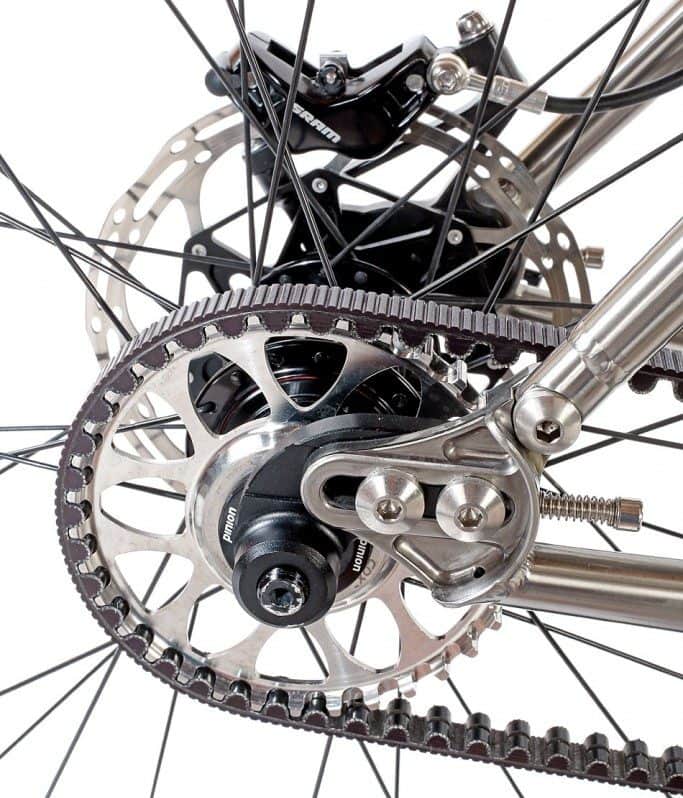 More attention to detail: The welds are neat as a pin, the hard- ware is well thought out and the features work well together. The adjustable dropouts make a perfect match with the belt-drive gear system.

The frame is built with attention to detail that’s immediately noticeable, especially if you understand those details. The welds are neat as a pin, and the alignment is right on the money, according to our digital calipers. The paint job is flawless and eye-catching, especially in the sunshine when the metal flake shines through. The Skeptic uses a combination of internal and external routing that keeps it looking streamlined and easy to work on. For example, the dropper-post routing comes out on the drive side of the seat tube, a detail that many would miss, but it means the cable will never rub a hole in the beautiful paint job. 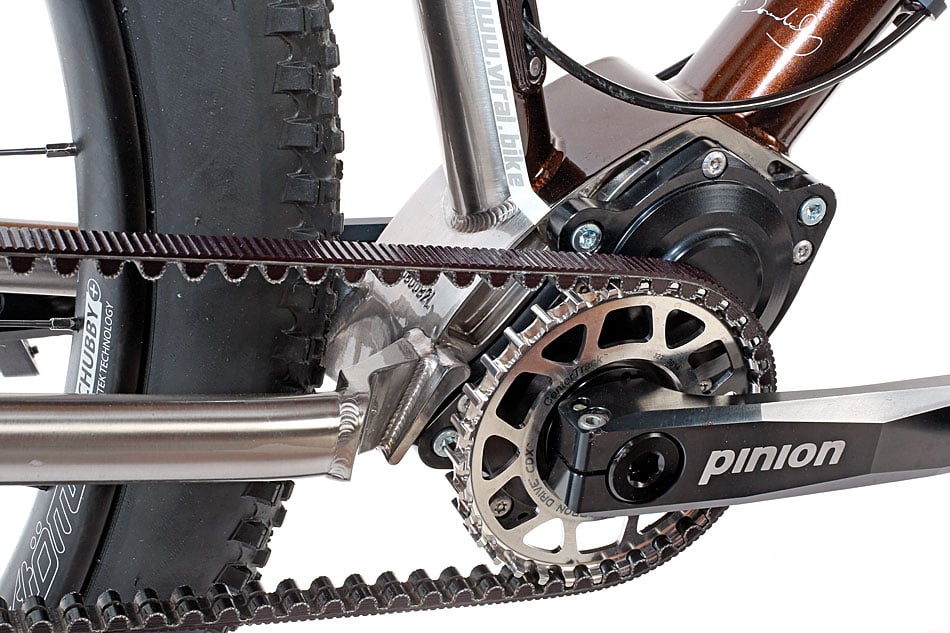 Routine upkeep: The Pinion gearbox is said to go a full year with no maintenance, even for a serious rider. The box houses 60 milliliters of oil that needs to be changed after several thousand miles. 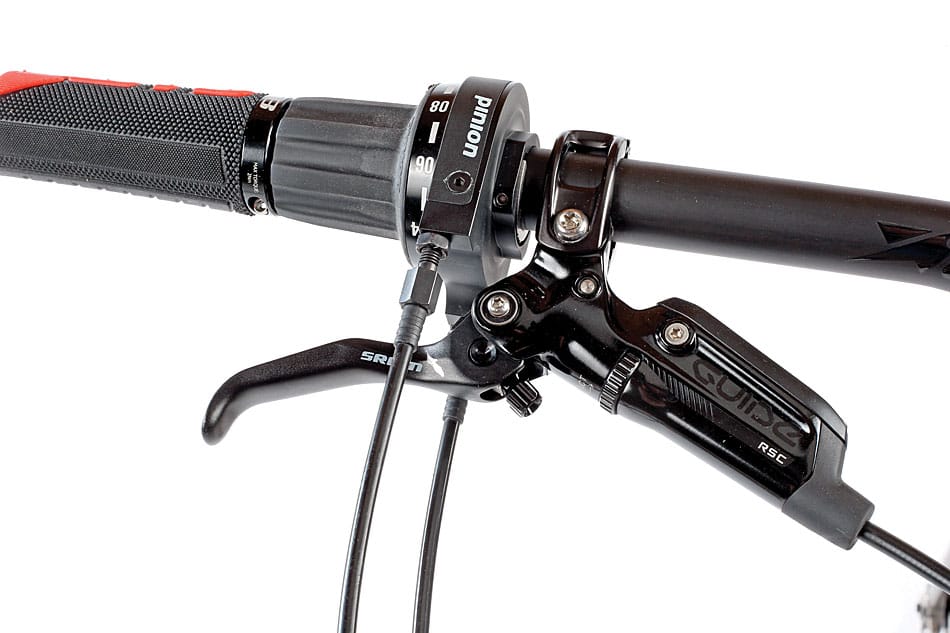 Coast to success: The grip shifter has multiple cables that control the gearbox. The system is designed to be shifted while coasting and not while pedaling. This gave some of our testers trouble while getting used to the system.

The Pinion internal gearing system is what sets this bike apart from the crowd. The P1.12 is a 12-speed system that requires the frame-maker to build around it. The system delivers a claimed 600-percent gear range, which is more than even the biggest current single-ring drivetrain systems. The system also claims it’s nearly maintenance-free, and can go about 6000 miles between oil changes, which means about once a year for the seriously dedicated rider. The oil-change system is also relatively easy to manage and doesn’t require that the gearbox be taken to a specialist. Simply drain out the old fluid from the “drain plug,” much as you would when changing the oil in your car, and then replace it with 60 milliliters of oil. Since the bike uses a belt drive, which also requires almost no maintenance, the bike is ready to be ridden, rinsed, and ridden again.

It’s simple. You put air in the fork to set your sag, pump up the tires and go hit the trails.

The Skeptic is basically a stock bike that feels like a custom-built machine. The large we tested came spec’d with exactly the right-size handlebar and stem and our preferred saddle and grips.

Viral will build the bike almost any way you want it. 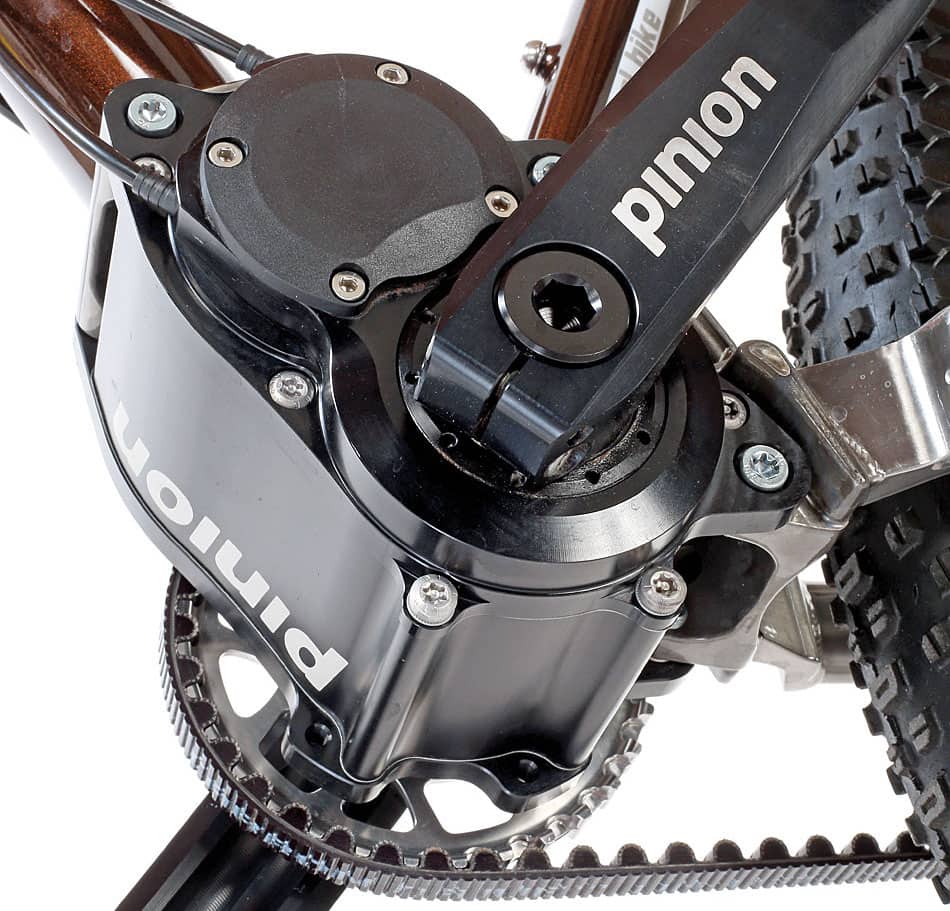 Pinion up close: The Pinion gearbox is a 12-speed system that claims to offer a wider gear range than any other 12-speed system currently available. We will vouch for the ultra-low granny gear.

The internal transmission was supposed to be the “wave of the future” a few short years ago; however, there had yet to be a design that could make it stick—that is, until a couple of engineers who design the gearboxes for Porsche came along and took on the task. Hopefully, the Pinion system, with all its promise of maintenance-free, crisp shifting, will open the doors for totally new designs. 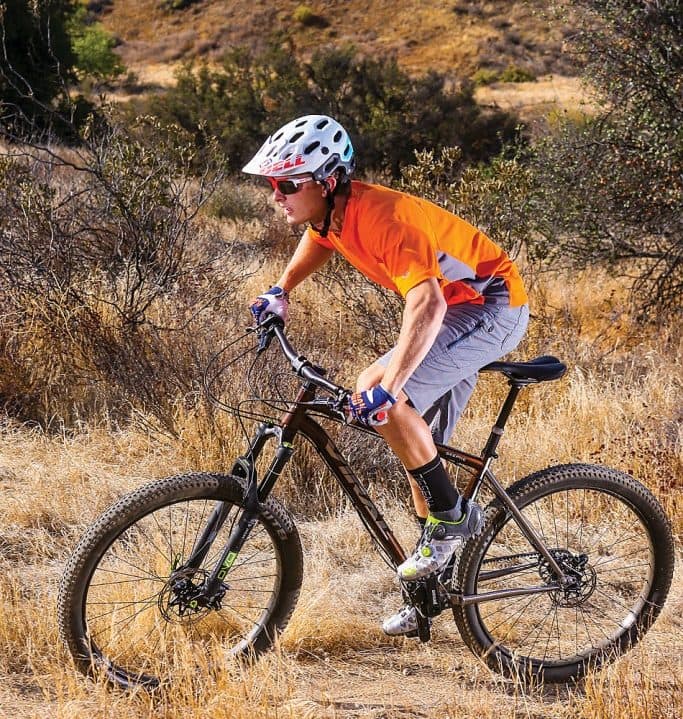 This is where the Viral really shines. The bike has a granny gear that’s so low it can truly harness the traction of the plus-size tires on this bike; this bike could probably climb an elevator shaft if it had to. As an added bonus, the hardtail design eliminates pedal bob. It’s safe to say that if you want to climb steep trails, this is one of the best bikes we’ve ever tested for the job. Just don’t get caught in the wrong gear and try to shift mid-climb, because the Pinion system will not allow shifting under a heavy load.

The Skeptic has a trail-friendly geometry and a remarkably balanced, low center of gravity. As a result, the handling is spot-on and it corners with ease. The lack of rear suspension requires more talent from the pilot to navigate technical turns, but aside from that, it handles impeccably. The plus-size tires are an added bonus that delivers traction in even the quickest turns. 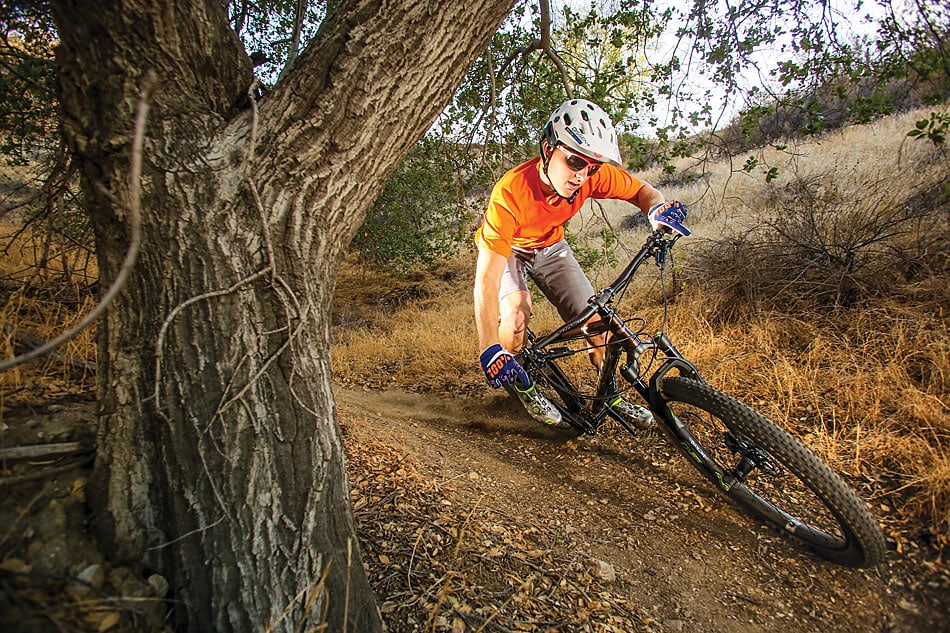 Gearbox that could kill derailleurs: Gearboxes were the wave of the future a few years ago but have not been perfected yet. Pinion looks to make the technology stick with technology borrowed from a group of German designers who typically build for Porsche.

Viral designed the Skeptic as a trail hardtail, which means the geometry is built to handle technical descents. It’s not as sure-footed as a full-suspension trailbike, but it delivers plenty of forgiveness with the dialed handling and big air-volume tires. The chainstays are on the long side, so this bike feels sure- footed and stable rather than twitchy. When pointed downhill, the Skeptic prefers to carve the lines and stick to the ground rather than jump, manual and flick off everything it sees. This bike is for the descender who loves to ride smoothly and doesn’t feel the need to air it out over everything.

The Pinion shifts remarkably fast and didn’t need any adjustments during our test; however, it shifts differently from any system we’ve used. Unlike conventional systems that only shift when the cranks are spinning, the Pinion system must be shifted while coasting. This makes for a unique feel that took some get- ting used to. For example, to downshift on a steep climb, the rider must back off the torque on the pedals to make it happen. On our first few rides this left us stuck in a high gear on short, punchy ascents; we basically toppled over trying to shift to a lower gear. But, after getting used to the system and breaking our habit of shifting too late, we were able to use the extremely low granny gear to claw our way up some extremely steep terrain. Additionally, the Pinion system makes this bike incredibly quiet and smooth and doesn’t add much resistance. The system does still have some parasitic drag that will slow you down, though, as it is inherently less efficient than a standard drivetrain. Riders who want the Viral geometry without the Pinion gearbox are in luck. Viral is producing a bike with a standard bottom bracket that will be available early next year. 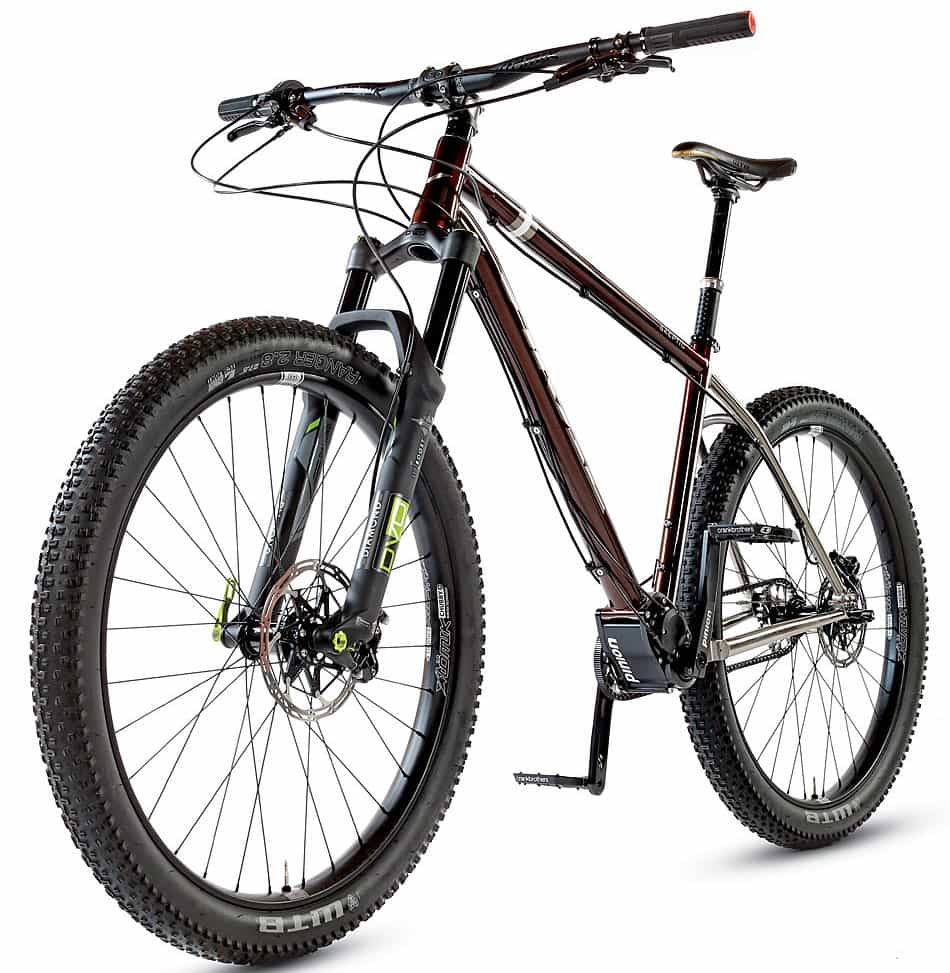 Let’s not mince words here. This is a unique and very expensive hardtail. The Pinion drivetrain delivers a larger range than any other 12-speed system out there and offers razor-sharp shifting; however, it comes with a hefty price tag and a weight penalty that’s over a pound. The Viral frame harnesses the Pinion system perfectly with craftsmanship and attention to detail that’s sure to last the life of this durable system. Bottom line: it’s a unique bike that works remarkably well and will be a lifetime partner for the rider who wants something different and reliable that requires very little maintenance and is buttery smooth. 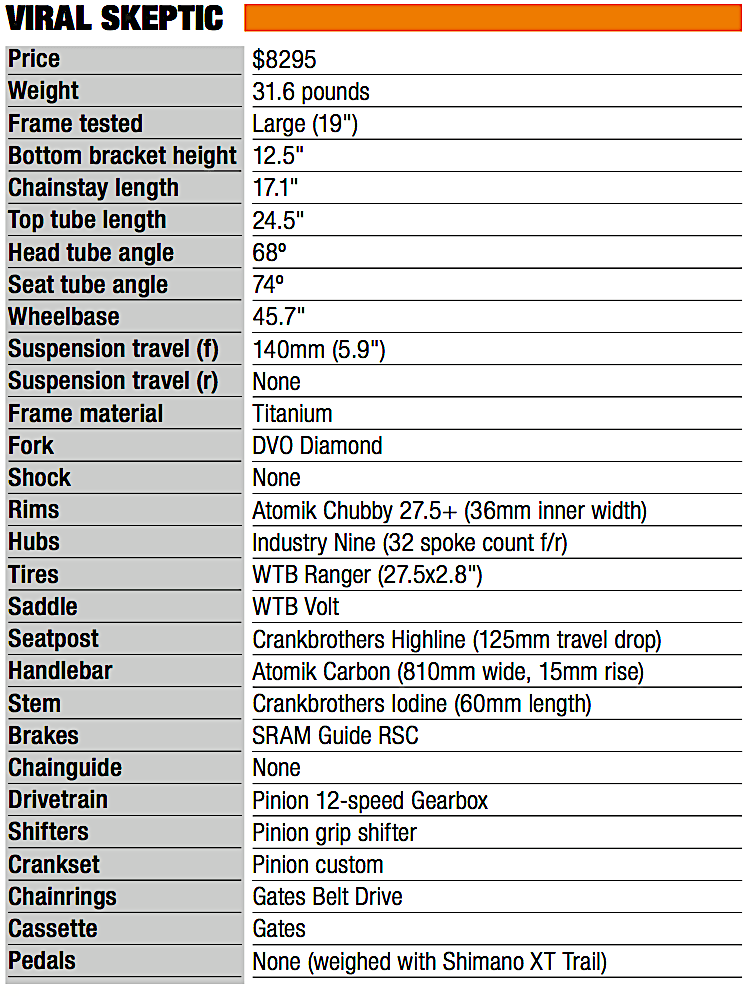 Photo of the Day: Spencer Rathkamp and the Viral Skeptic

Troy Lee’s Best Trail Helmet Yet – The All-New A2