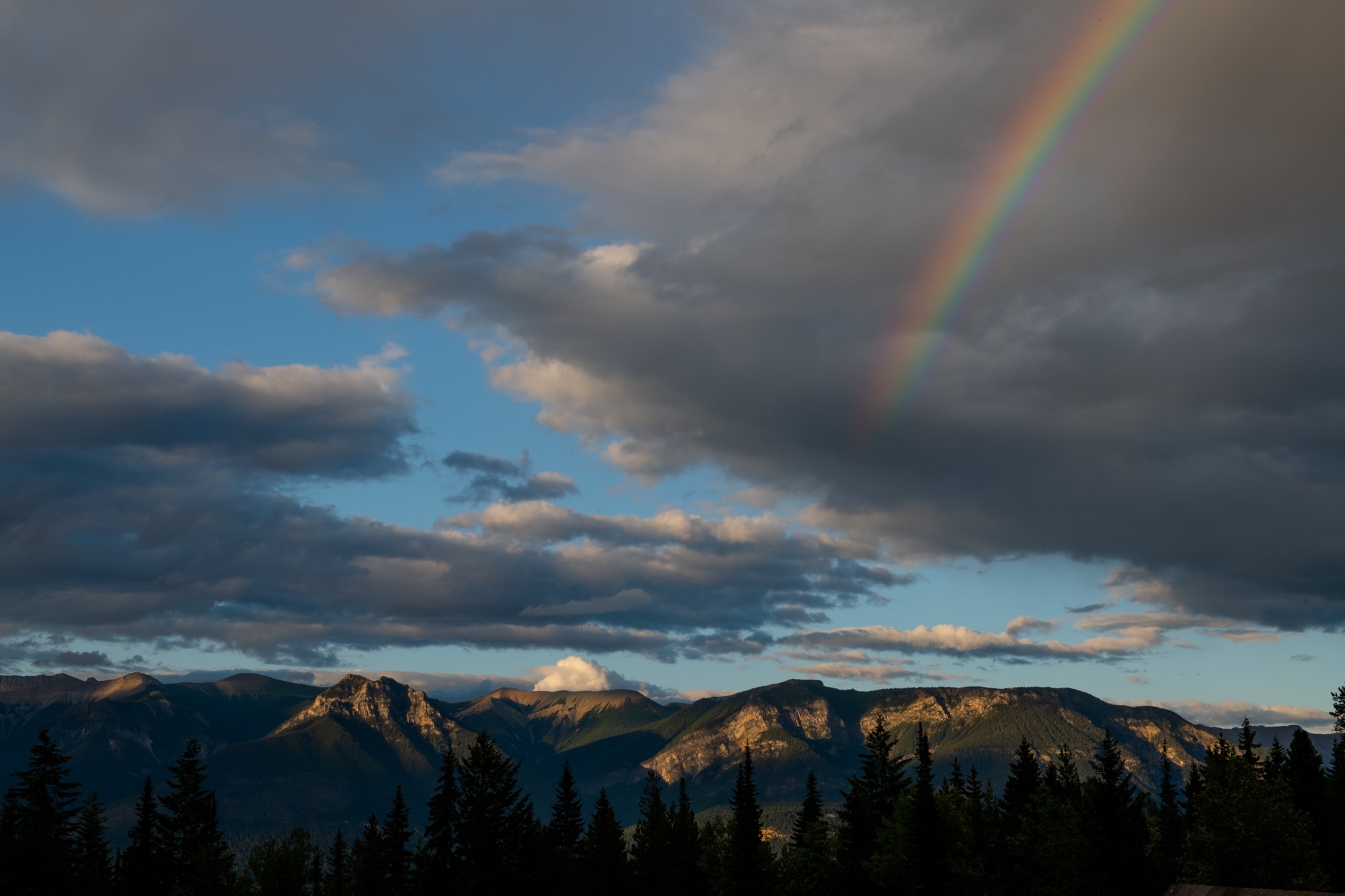 “I feel like I’m in the best shape of my life right now,” said Finn Iles after taking three of four stages in the Kicking Horse Enduro today, including the longest stage of the day that followed on the heels of a punishing climb.

“I went a little bit faster on the big, massive pedal because I thought that if I had more time at the top I’d be able to rest and just be ready for the stage…So I was up there and I felt really good. I dropped in, almost crashed within the first three corners because I was a little bit nervous, I was like ‘Don’t blow the lead,’ but after that I sort of settled into my groove and a lot of the stuff was rougher and faster and suited my riding style. Yeah, it was awesome. “ 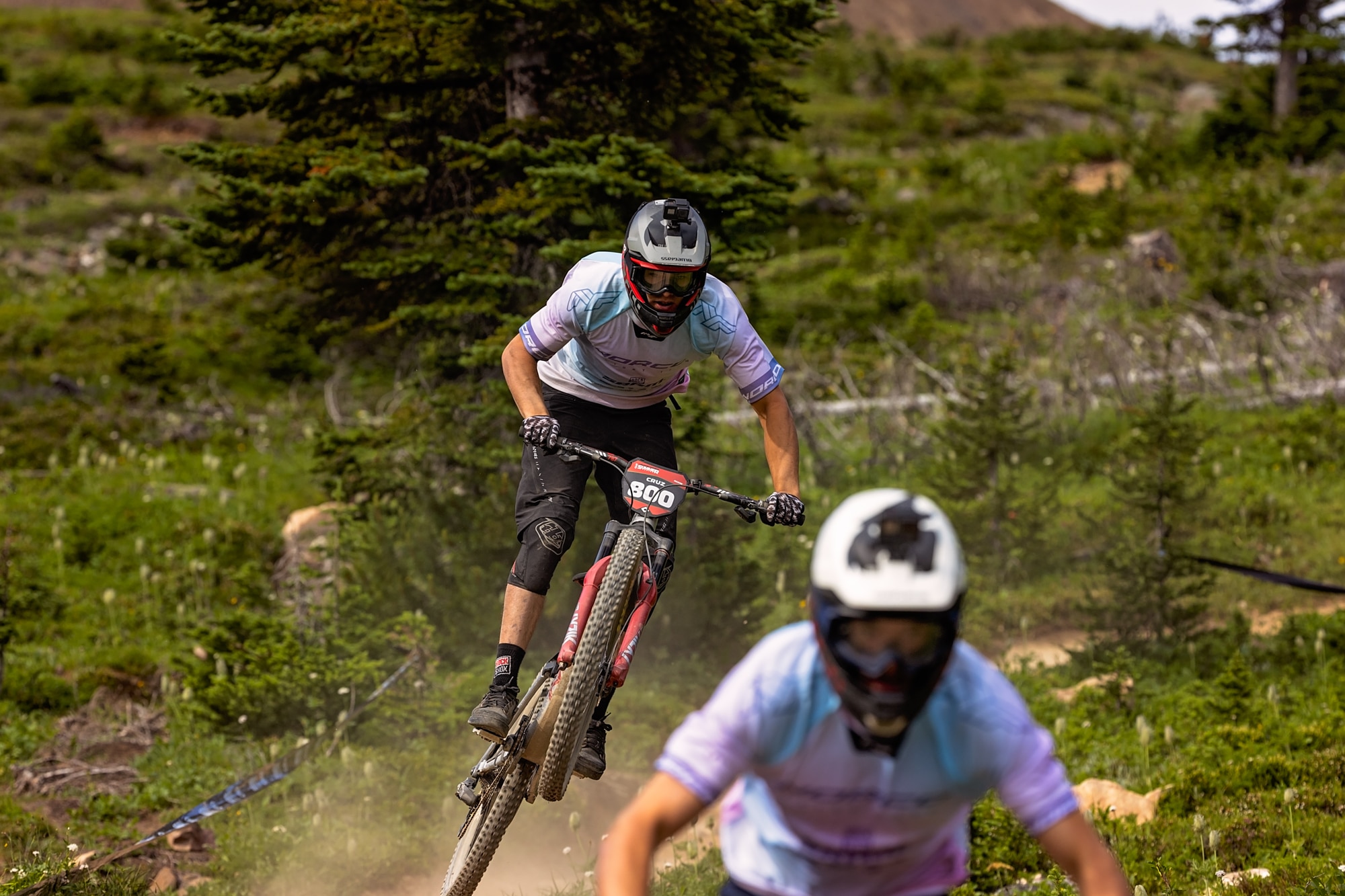 “It’s the same as last week for me,” said Iles. “I just sort of kept a positive attitude. All this riding is just fun riding. And besides, the first stage, which was really hard because there was a lot of pedaling and a little bit tighter and at altitude…all this lower stuff was so sick. You’re riding your bike and you’re like ‘Oh my God, this is so fun.’ I think I just kept it quiet tidy and, yeah, I’m happy about it. Really happy about it.”

“I was super happy with the result,” said Andréane Lanthier Nadeau (ALN) “It’s always cool to have a win. Definitely even cooler just to be building up my form back to racing. I’m really, really thankful that Crankworx is giving us the opportunity to have some races. I think this is going to be life-changing for the B.C. field in the international race scene. I really think that’s important, and that’s so cool.” 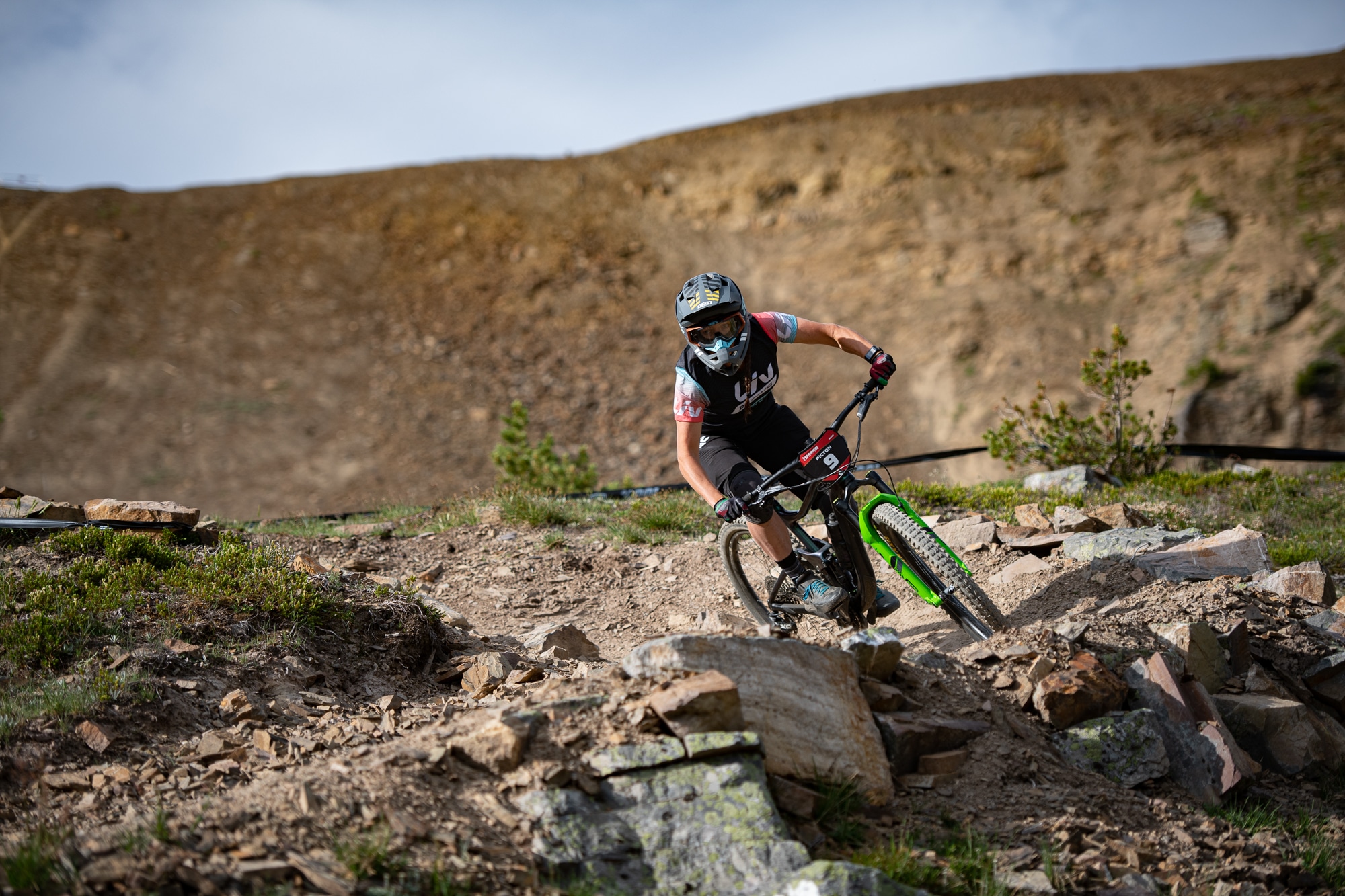 ALN and Miranda Miller traded stage wins (by a consistent margin of two seconds, ALN taking 1 and 3, Miller taking 2 and 4) all day, but in the end ALN’s overall time of 21:16.42 prevailed, by a narrow 0.03 seconds.

“Today was one of the most fun races I think I’ve ever had,” said Miller. “I liked the tracks this week…It kind of feels like Europe, but with flow. It was cool to push myself on longer tracks. And then really cool because ALN and I had a two second flip flop battle all day, and she got me by like 0.03. That’s cool.”

For both Miller and ALN, today’s results are their best of the series so far. ALN said she’s feeling more like herself as Week 2 racing kicks off, after feeling somewhat unprepared at the start of the series. 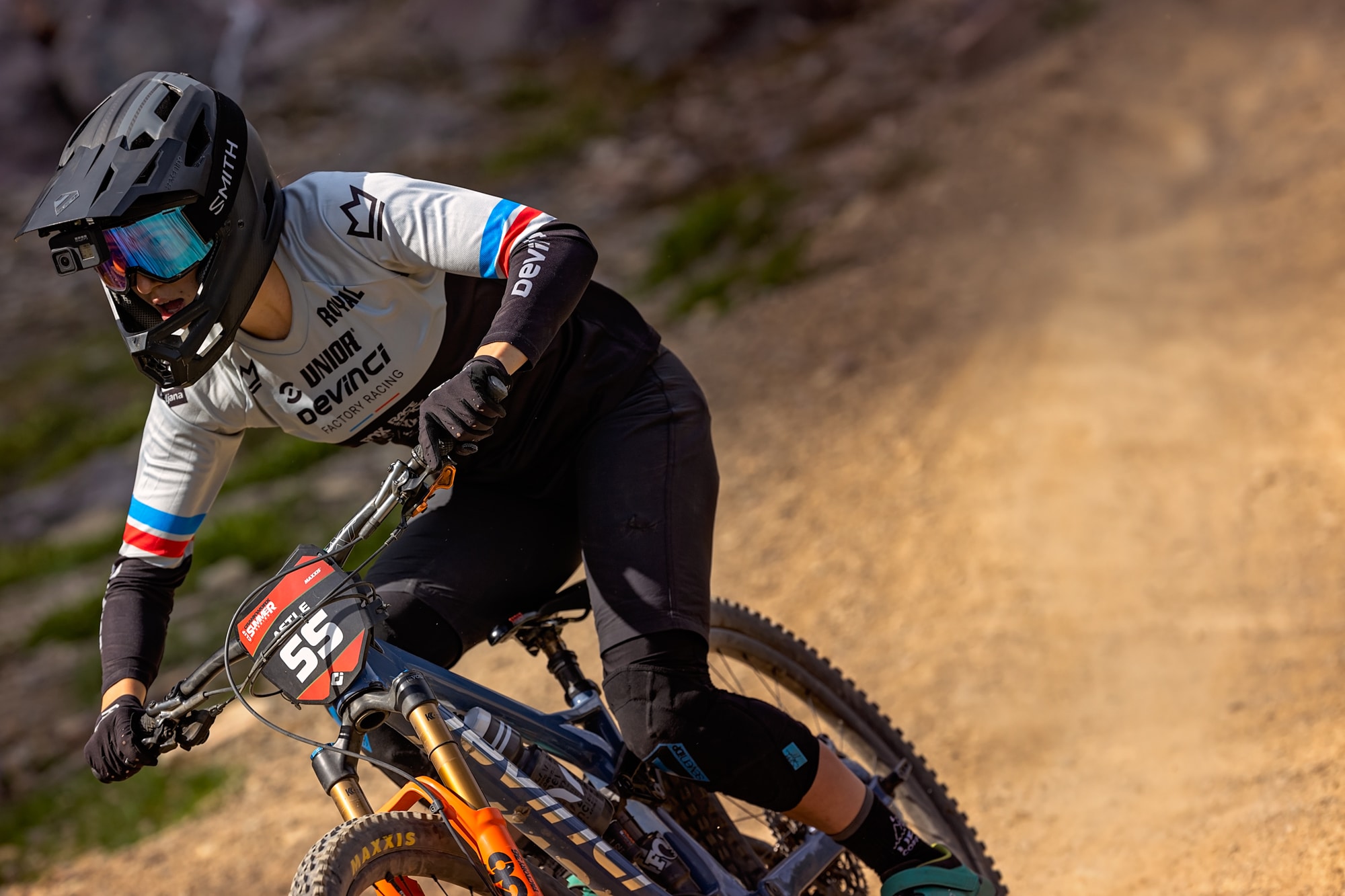 “During COVID I chilled hard, because for me to be at optimal form, and to train at the level we train, while not knowing when we were going to race, was super depressing to me. So I slowed down and just remained happy and did other things. This is me returning to racing and building up my form. It’s the perfect opportunity.”

Third place went to the ever-consistent Casey Brown, who came into Kicking Horse second in the overall after SilverStar.

On the men’s side, while the times weren’t as tight, the pressure definitely wreaked some havoc.

“I’m pretty happy with second today,” said Woolley, who pushed closer to the top as the day went on, coming in third on Stage 1, second on Stage 2, then winning the third. “I really wanted to put down a good last stage and give it my best effort. Fairly shortly into the last stage I broke a spoke in my wheel, and that was the end of that. At that point, I just wanted to nurse it to the bottom. It was really loud though and super distracting. I ended up having a big crash and my bike went down an embankment. I had to go down and get it. Luckily I had a bit of a gap to third, so I just held on to it.” 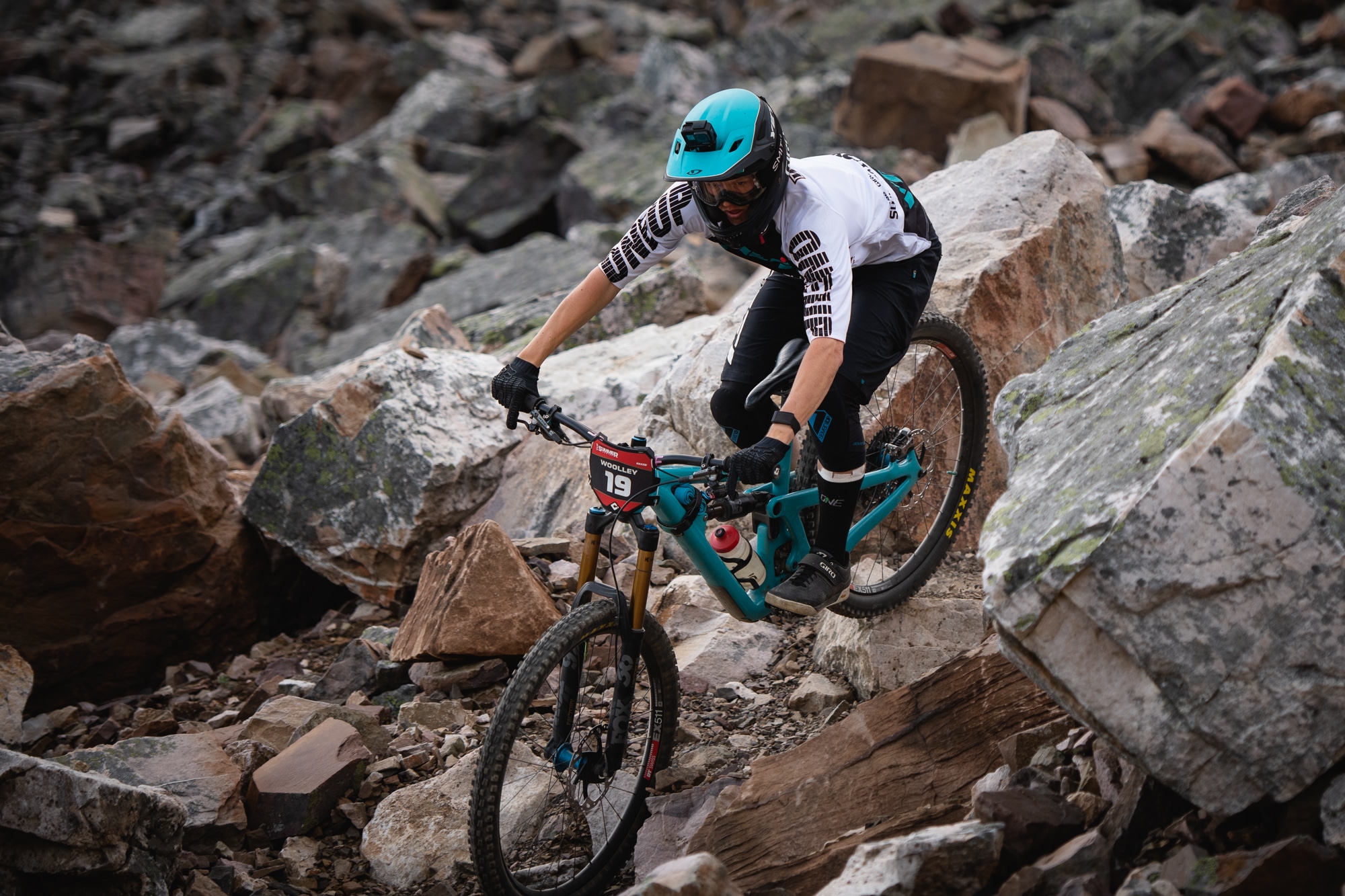 For Jesse Melamed, his day was reversed. He was in touch in the final three stages of the day, finishing third, third and second, but his overall time was definitely hampered by Stage 1.

“There was this super tricky right-hander that I think everyone struggled with. I knew it was coming and I set up, but I think so many people had blown it that the line was kind of crossing the line you were supposed to do, and it kind of just threw me off. I tucked my front and unfortunately not just that, my bike just went tomahawking. I had to run down the hill, grab it, straighten my bars, fix my brakes. It was a really long crash, which was unfortunate.”

Melamed was in 14th after the first stage, but managed to fight his way up to sixth overall with an 18:48.44.

“The rest of the day, I didn’t change anything, I just rode my bike and…