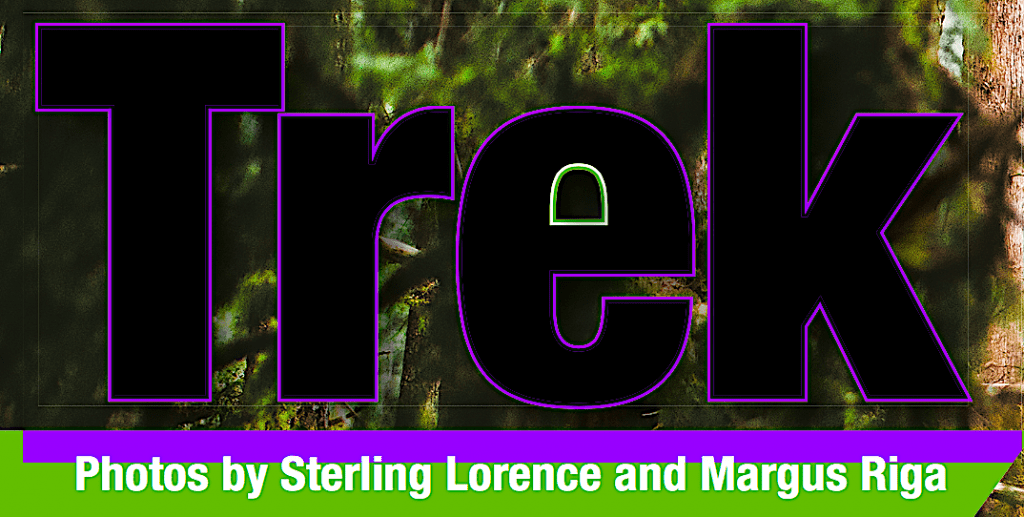 We recently met up with Trek along with their premium athletes in Squamish, British Columbia, Canada, which is located between Vancouver and Whistler, to ride their newest bikes on some killer trails. Squamish, sometimes referred to by the locals as Squampton, has tons of awesome singletrack, ranging from natural trails with big rocks and roots to man-made flow trails seen in a few Red Bull movies. These trails are easily accessed by pedaling, but shuttle junkies will find themselves wanting to keep driving to Whistler Bike Park. Riders who enjoy a full day in the saddle, however, will find that the trails in Squamish are not only worth the stop but well worth an entire trip. 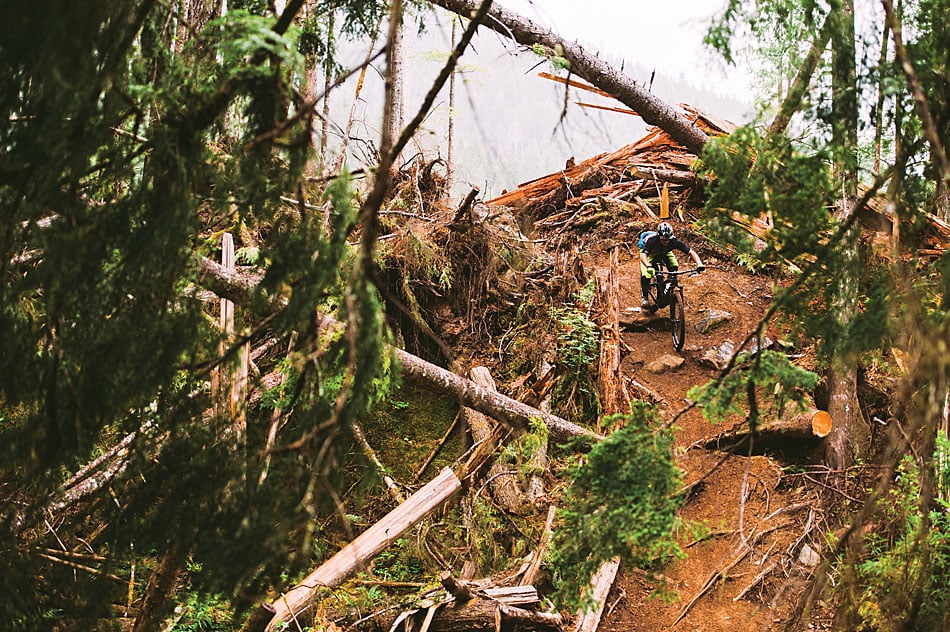 Riding Squamish: Squamish is a premium riding destination located between Vancouver and Whistler that offers killer trails and scenic views. These trails range from flowy jump trails to natural technical trails and everything in between.

For 2017 Trek took a new approach to their lineup and adopted the attitude that their new bikes should be longer, slacker and offer more travel than their previous models. Along with the more aggressive styling, Trek also incorporated a few new innovations into their 2017 bikes. The first innovation is the straight-shot downtube, meaning the downtube is a straight line from the head tube to the bottom bracket, which is claimed to increase stiffness. The second feature is the new Knock Block frame defense system, which prevents the steering of the bike from being over-turned, resulting in the fork or the handlebars contacting and damaging the frame. Trek also reused some of their existing technology, like the Mino Link, which can roughly change the head tube angle half a degree while also lowering the bottom bracket. For the third year in a row Trek reused their RE:aktiv suspension technology, borrowed from Penske Racing, who have developed suspension designs for NASCAR and Formula One race teams. The two new bikes we rode on the trails in Squamish were the all-new Fuel EX 29er and the all- new Remedy 27.5. Trek also debuted two new bikes that we didn’t get to ride, including the pre-released Fuel EX 27.5+ and the all-new more-aggressive and longer-travel Slash 29, which was released a few weeks after the Fuel and Remedy models. 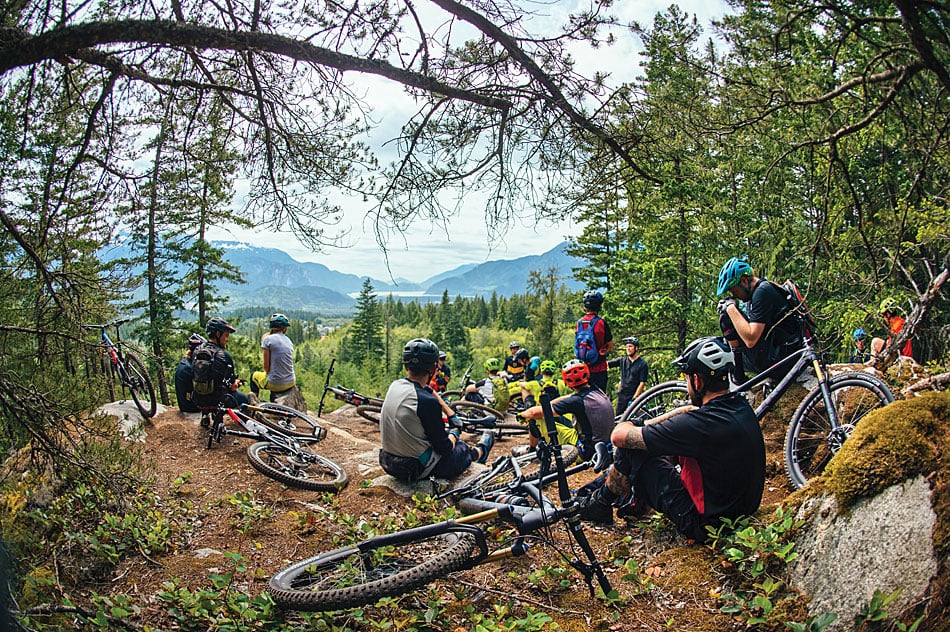 A quick break: The trails in Squamish are physical, requiring riders to occasionally stop for a break. Many riders, however, won’t want to stop for too long, since there are miles and miles of amazing trails to explore. 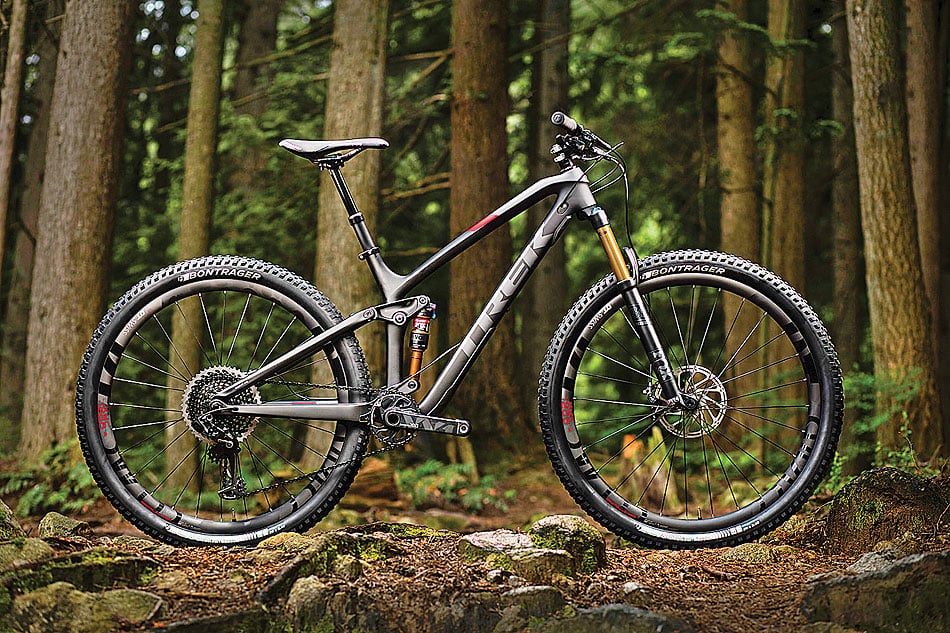 The Fuel EX 29 now has 130 millimeters of travel front and rear. 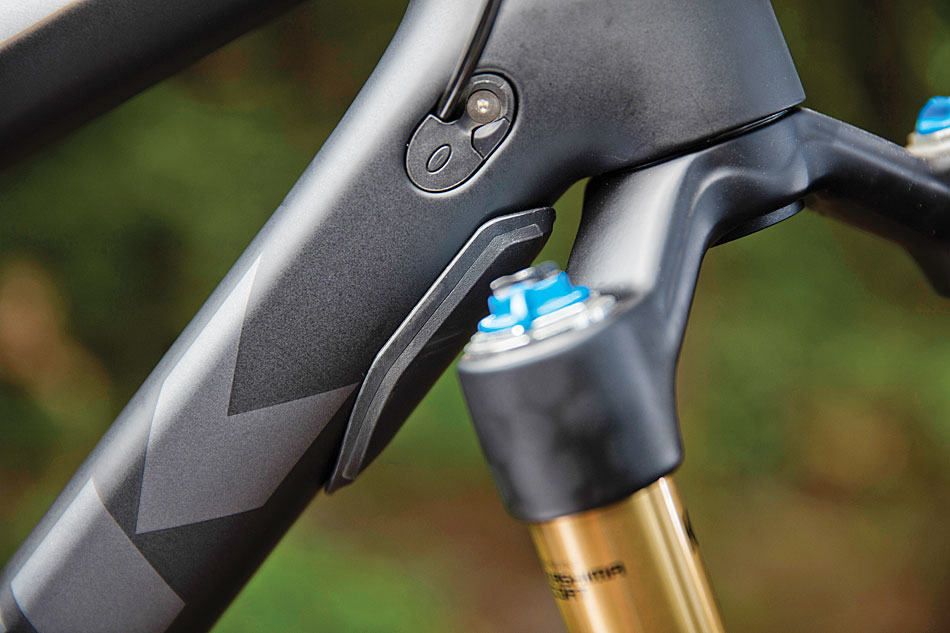 Straight downtube: Trek found that the normal, curved downtube was inferior in strength and weight savings compared to a straight one. Trek’s new bikes now use this straight-tube design to help add strength with less material, thus making it lighter. Bump stops were also put in place to help protect the frame.

The reach on the new Fuel EX was lengthened about 5 millimeters to add stability and control at high speeds. 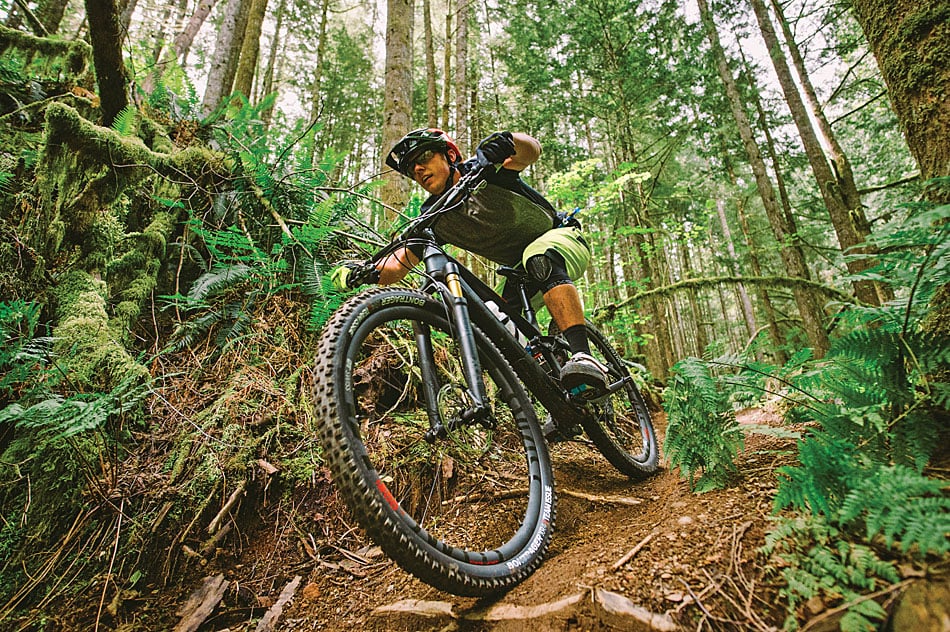 Trek Fuel EX: The Trek Fuel EX is a very capable trailbike, with aggressive features and a highly efficient suspension package. This bike is fast on any part of the mountain and will fit the needs of novice and expert trail riders alike.

The Fuel EX is a light-weight trailbike that is extremely capable on any part of the trail. We found technical climbs were made easy and steep descents were made fun. Our first ride aboard the new Fuel EX consisted of over 30 miles and about 4000 feet of climbing. We felt we pushed this bike really hard through- out the climbs and the descents, and it kept asking for more. Riders looking for a well-rounded trailbike will love the new Fuel EX. In fact, the Fuel EX lineup is Trek’s best-selling trailbike. 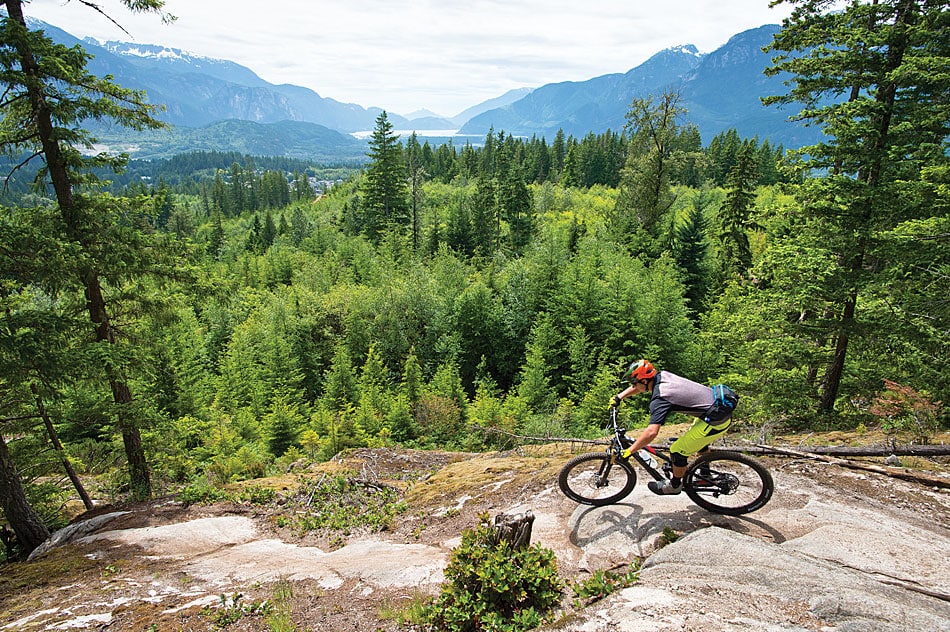 Natural trails: Some of the trails in Squamish have giant, smooth rocks that are a blast to ride down. When these rocks are dry, they provide tons of traction, but rainy days, which happen often, can cause these trails to become a little hairy. 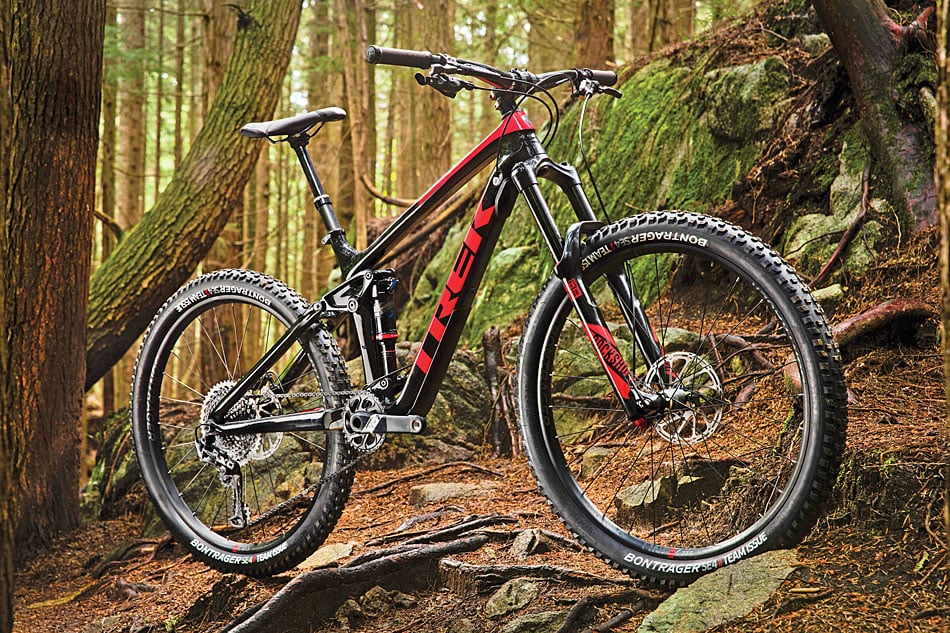 Say goodbye to the Remedy 29:

The new Remedy will only be available in a 27.5-inch version. The new and more aggressive Slash 29 will replace the previous Remedy 29. 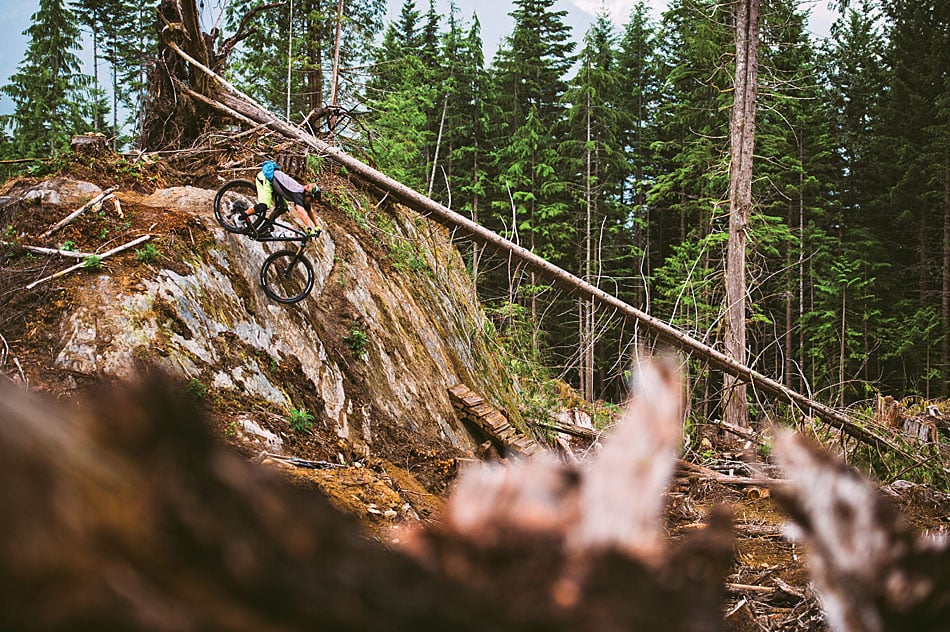 Droppin’ in: Squamish is filled with fun yet challenging trails that will keep riders of all skill levels on their toes. Some trail features, like this one, are built off to the side of the trails, leaving it up to the rider to decide whether or not to go for it. 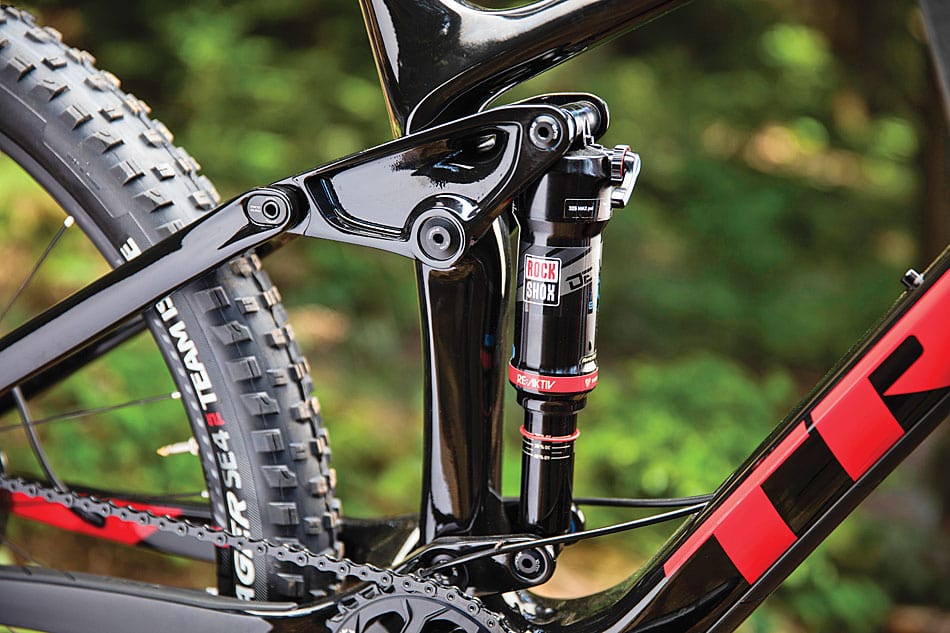 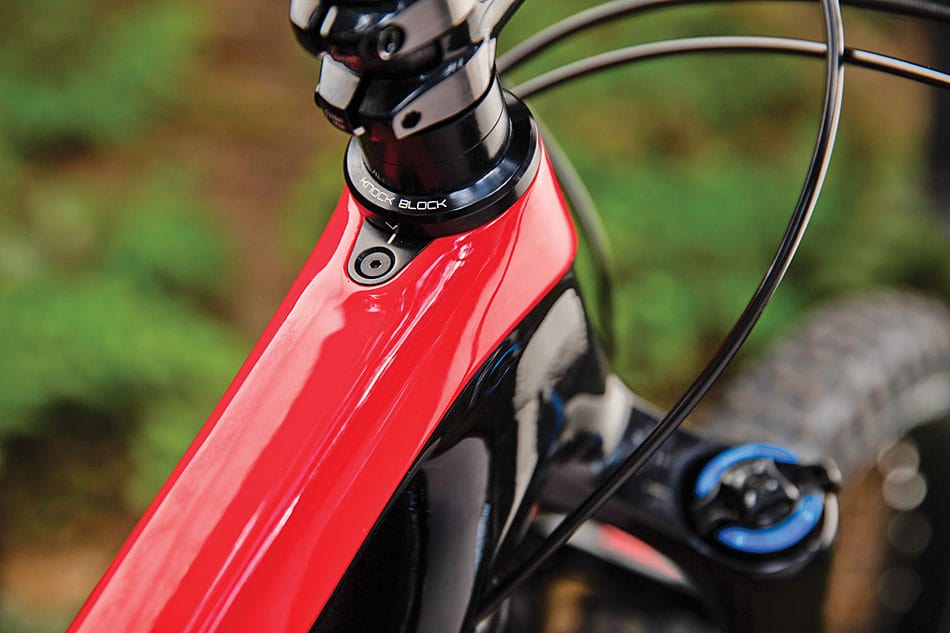 Knock Block: Trek’s new Knock Block technology uses an integrated system that protects the frame from being hit by either the handlebar controls or the fork’s crown.

The Remedy 9.9 and the Remedy 9 will include the Race Shop Limited package that adds an adjustable 160-millimeter fork and a pair of Bontrager SE4 27.5 x 2.4 tires. These models will also feature slacker head tube angles at 66/65.5 degrees. 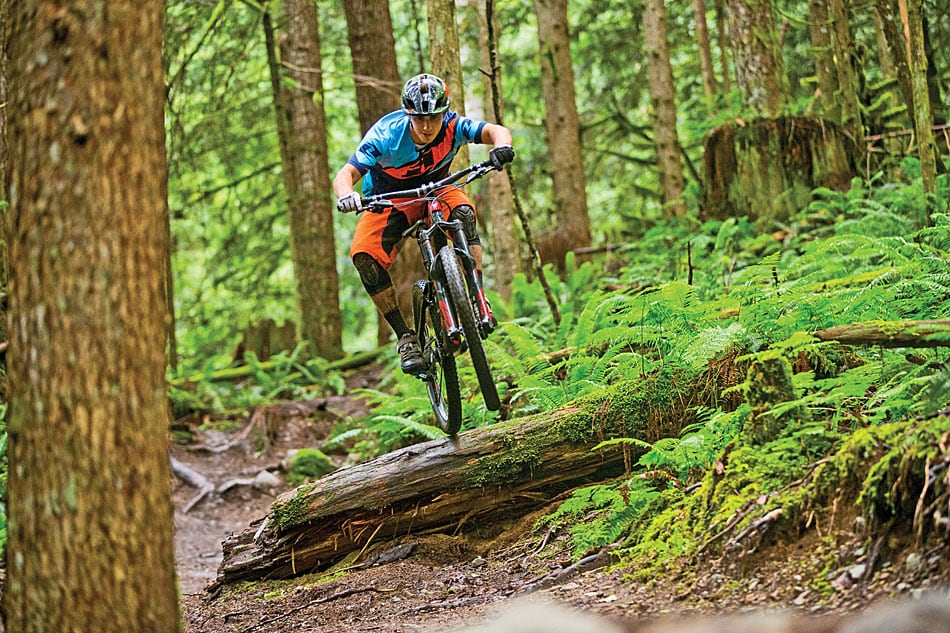 Trek Remedy: The Trek Remedy is now only available in a 27.5-inch wheel size and offers a more aggressive geometry than ever before. The all-new Remedy pedals really well up the hill and is a shredder when it’s pointed back down. 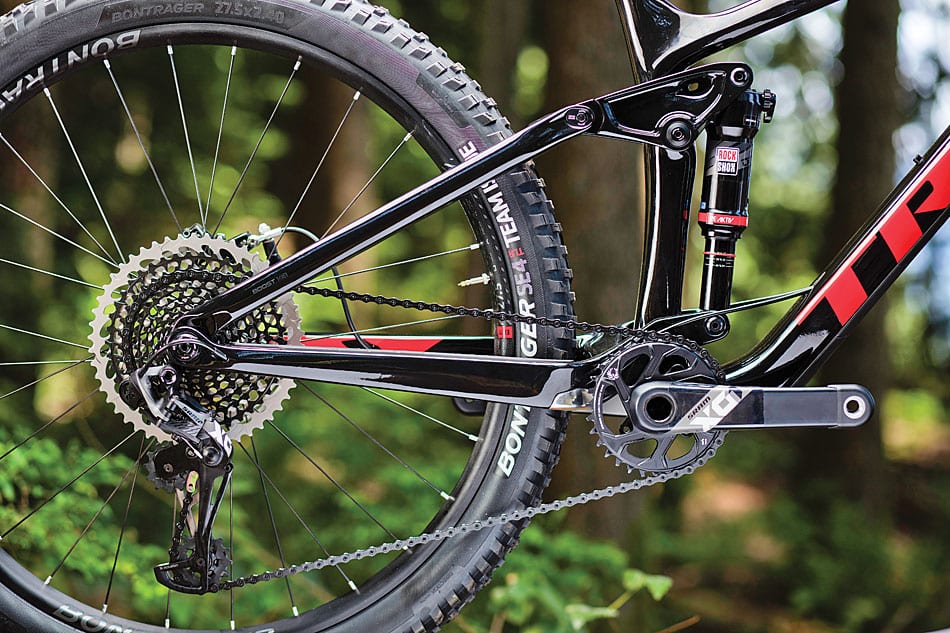 The Eagle has landed: Both top-of-the- line Trek bicycles we rode had SRAM’s newest 1×12 drivetrain. The 10-50-tooth rear cassette offers a humongous range, making it easy for riders to tackle the steepest trails.

Trek set us up on the top-of-the-line Remedy that had an XO1 Eagle drivetrain and the super-aggressive Race Shop Limited package. For a macho long-travel bike, we were surprised with its ability to go uphill. The suspension offered us efficient pedaling for going up, and it also was super plush on the way down. The Remedy is an aggressive bike that looks for a rider willing to push its limits, and trust us, those limits are set high. 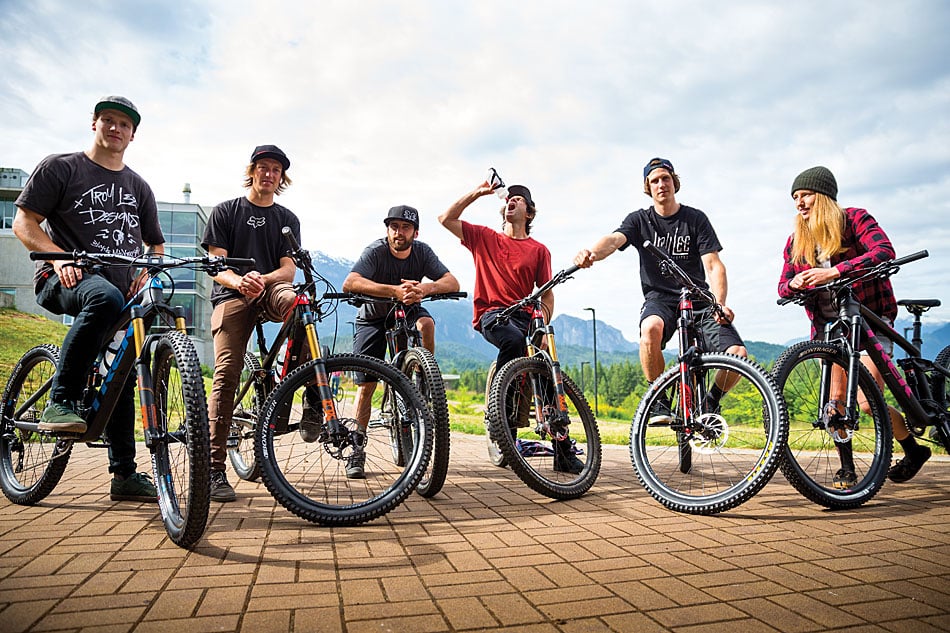 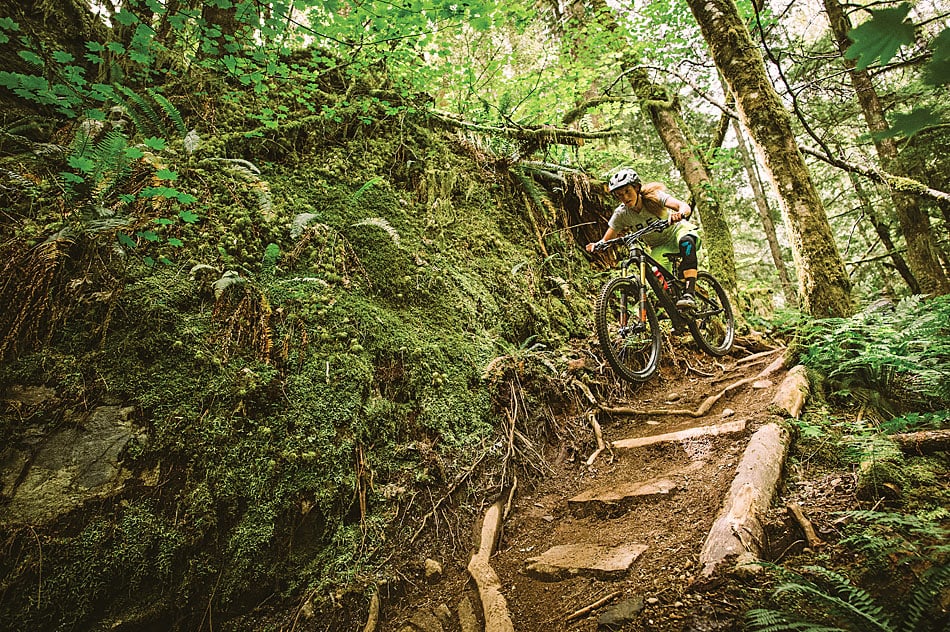 Say goodbye to the Lush:

For 2017 Trek replaced the Lush with the all-new women’s Fuel EX.

The 2017 women’s Trek Fuel EX offers the same performance as the men’s models by using the same geometry, but offering a more female-friendly fit such as narrow bars and a shorter stem.

Remedy for the ladies:

The Remedy will also be available in two female-specific models that share geometry with the men’s models, but use carefully selected parts for a comfortable fit. 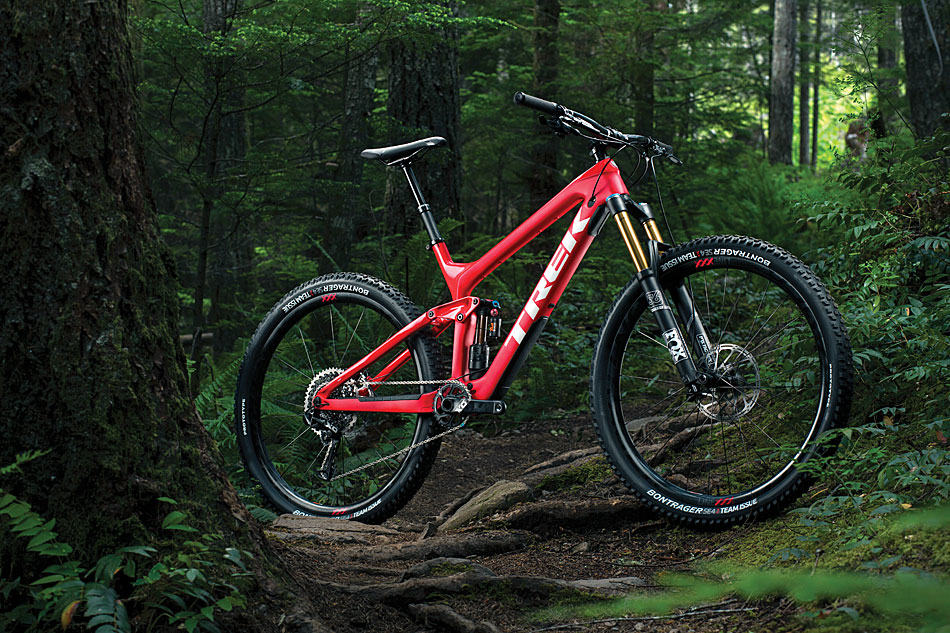 The Slash 29 will only be available in carbon and will only come with 29-inch wheels.

According to Trek, the all-new Slash 29 is like the previous Remedy 29 but better in every way.

The Slash 29 is claimed to be the stiffest non-downhill bike Trek has ever made. According to Trek, it won’t flinch in even the toughest terrain.