The Giant Yukon FX versus the Giant Talon 29er 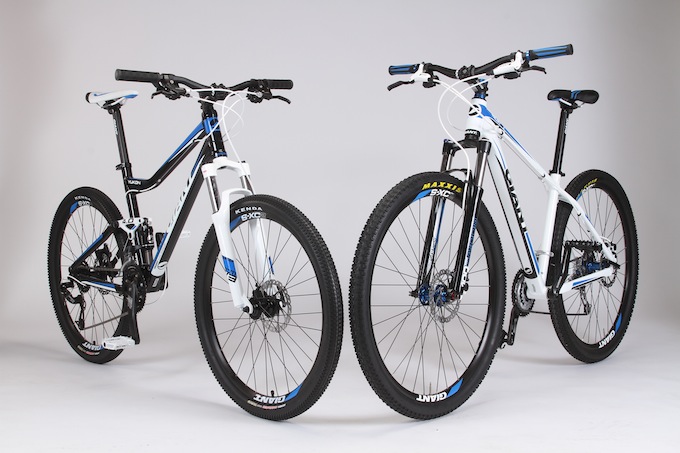 Bike shootouts usually corral similar bikes that sell for around the same price to battle it out for supremacy. This shootout is a little different. The two bikes from Giants are only similar in price. They have different wheel sizes and a totally different approach to how those wheels connect to the trail. One bike has dual suspension, while the other has a suspension fork and a rigid rear end. So why compare these two seemingly different bikes? Because that is exactly what any rider looking for a $1000 mountain bike is going to have to do. This shootout is not so much between bikes as it is between the riding experiences you’ll get from each bike. 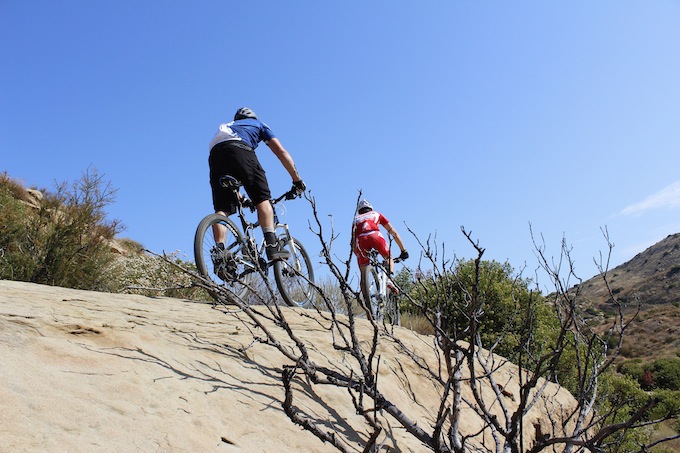 WHO ARE THEY MADE FOR?
Both the dual-suspended, 26-inch-wheeled Giant Yukon FX and the hardtail Giant Talon 29er are made for beginners or those on a budget seeking to get the most out of their riding experience. These are not thrown-together clappers made to look like mountain bikes (think $199 tanks with knobbies). Both are solid entry-level trailbikes that will meet the needs of beginners and then back them up as their skills increase. Both bikes are built to withstand the rigors of trail riding; however, they are not intended for sending you off big jumps and drops. If you are looking to get into the sport or upgrading a 10-year-old hardtail, either one of these bikes should be on your list.
WHAT ARE THEY MADE FROM?
Both frames are made out of Giant’s ALUXX aluminum alloy. The tubesets have been internally butted and hydroformed to optimize strength and weight.
Yukon FX: The Yukon FX is designed around the traditional 26-inch-wheel standard and features 4 inches of suspension travel. The Yukon FX gets its spring from an inhouse Giant air shock, which is easily adjusted via air pressure to accommodate a wide range of rider weights. It also features an external rebound adjustment. The fork features 3.9 inches of travel, an external preload adjustment and lockout. The Yukon FX features a mix of SRAM and Shimano drivetrain components with a total of 24 gears.
Talon 29er: The Talon 29er frame was designed from the ground up to meet the needs of big wheels. The fork features 3.9 inches of suspension travel, an external preload adjustment and lockout. The front wheel is secured to the fork via a 15-millimeter thru-axle for added stiffness and better handling (a nice feature for a bike at this price point). Like the Yukon FX, the Talon 29er also utilizes SRAM and Shimano drivetrain components, but it has a total of 27 gears. 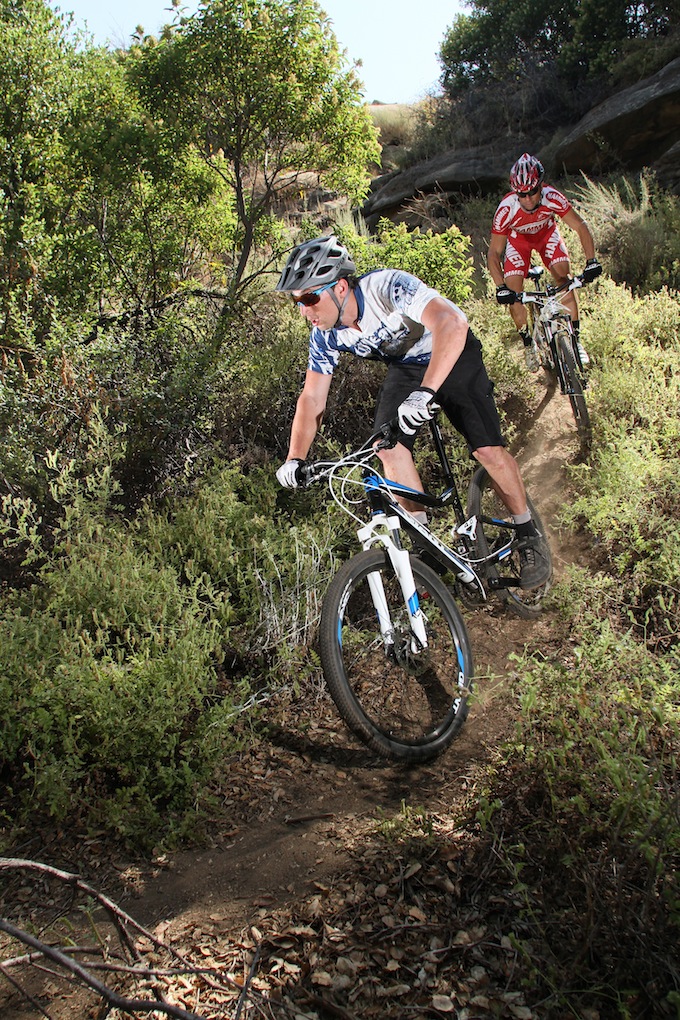 HOW DO THEY PERFORM?
ERGONOMICS
Yukon FX: The suspension is easy to set up. We ran approximately 2025-percent sag on the shock. If you don’t understand sag, have the shop set this for you. Without the proper setting, you might as well buy a hardtail. The stem length felt appropriate and could easily be configured to suit a wide range of riding preferences. The grips were standard slip-ons that did migrate a bit on long descents.
Talon 29er: Due to the larger wheel size, the front end rides fairly high. An experienced rider will likely run the stem inverted, but for a new rider, the setup is great because it puts the rider in a comfortable, upright riding position. The handlebars were a half-inch wider than on the Yukon FX, and that slight difference was noticeable and ultimately provided more stability. We liked the ergonomically designed lock-on grips and never had a problem with them slipping. Those who haven’t spent much time in the saddle will likely prefer the seat on the Talon, as it has a bit more padding.
SHIFTING
Yukon FX: There is an inevitable trade-off for having a dual-suspension bike at this price point. Something has got to give in the component spec. For the Yukon FX, it was the eight-cog cassette. We had no problems with the system as it shifted cleanly and never jumped out of gear. The jump between the eight gears compared to a closer-spaced nine-cog cassette is far more noticeable. Sometimes it took a bit of ingenuity to find the ideal gear. The shifting works just fine, but lacks the smoothness of a more expensive drivetrain.
Talon 29er: The folks over at Giant were able to give the Talon 29er the next level in shifting. With nine cogs on the cassette, it was easier to find the appropriate gear for a given terrain. The shifting was smoother than on the Yukon FX,
and we never had any problems with it.
CLIMBING
The Talon 29er smoked the Yukon FX on the climbs. This wasn’t a big shocker to the wrecking crew. The Yukon FX is a decent climber for its weight. Select a low gear, stay in the saddle and you’ll get to the top in due time. Climbing in the saddle, the Yukon FX was a bit more comfortable, as its rear suspension would soak up some small bumps. The Talon 29er really shined going uphill. It is lighter than the Yukon FX, and its tires deliver traction in or out of the saddle. The larger-diameter wheels allow more rubber to stay in contact with the trail. This translates into better traction going uphill. Both bikes are equipped with fork lockouts, but we rarely used them. The Yukon FX’s lockout is very harsh, and the bike climbs worse with the lockout onunless you are on pavement. The lockout on the Talon 29er felt slightly better, but we seldom used it on the trails. 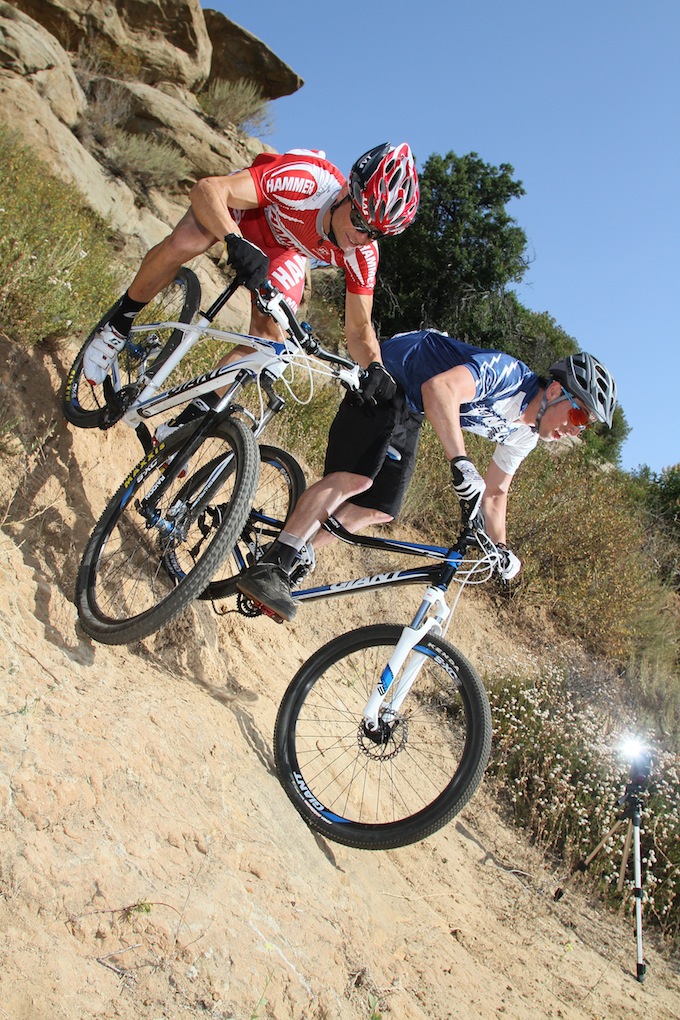 CORNERING
The 26-inch wheels on the Yukon FX give the bike a nimble feel in the corners. It doesn’t take much rider input to get this bike to change direction. The Kenda Small Block Eight tires work well, but these tires are used by cross-country racers. That means they grip on hardpack terrain only to find their limit quickly on loose terrain. The higher bottom bracket is noticeable on the Yukon FX and sometimes deterred riders from really leaning the bike over. The big wheels on the Talon 29er make for a much more relaxed and predictable feel in the corners. The Talon 29er takes a bit more effort to navigate around tight switchbacks, as the bike feels slightly larger and longer. The 29-inch wheels hold their own, giving the Talon 29er far superior traction in the corners. The lower bottom bracket height made the Talon 29er feel like it was on rails when zipping around a serpentine singletrack.
DESCENDING
The Yukon FX’s active rear suspension is impressive. It is able to take the chatter out of the trail better than the Talon 29er. However, the fork on the Yukon FX lacks any sort of damping control, resulting in a fork that springs back rapidly and has a harsh top-out. The fork on the Talon 29er feels much more controlled in the rough and doesn’t have a harsh top-out. The 29-inch wheels roll over rocks and maintain their momentum better. The Yukon FX allows the rider to get lazy, as the suspension makes up for poor line choices. The rider aboard the Talon 29er has to be more aware of his surroundings and pick better lines to ensure a smoother ride. Still, once past the beginner stage, you will feel more confident on the Talon 29er.
BRAKING
Although the Talon 29er comes equipped with hydraulic disc brakes, the performance advantage they offer is minimal. The mechanical disc brakes on the Yukon FX perform just fine. The only downside to the mechanical brakes is that they require more frequent adjusting to maintain a consistent lever feel. The brakes being equal, the larger wheels of the Talon give the bike a bite advantage during braking, as long as the rider is careful about line selection.
TRICKS, UPGRADES AND TIPS
Yukon FX: The rim strips are awful and did a terrible job protecting the inner tube. Expect to be repairing a lot of pinch flats if you don’t have your shop install highergrade rim strips. We prefer cloth rim strips from Velox. It’s a $10 upgrade that is well worth it. Also, the handlebar grips slipped, so apply grip glue to eliminate this problem. Once you have time on the Yukon and your skills have increased, a simple fork upgradesomething with an external
rebound controlwould do wonders for this bike. The RockShox Tora is a good example.
Talon 29er: We would recommend upgrading to clipless pedalsthis bike deserves it. A neat trick is converting the wheels to tubeless. Not a necessity, but a noticeable upgrade. 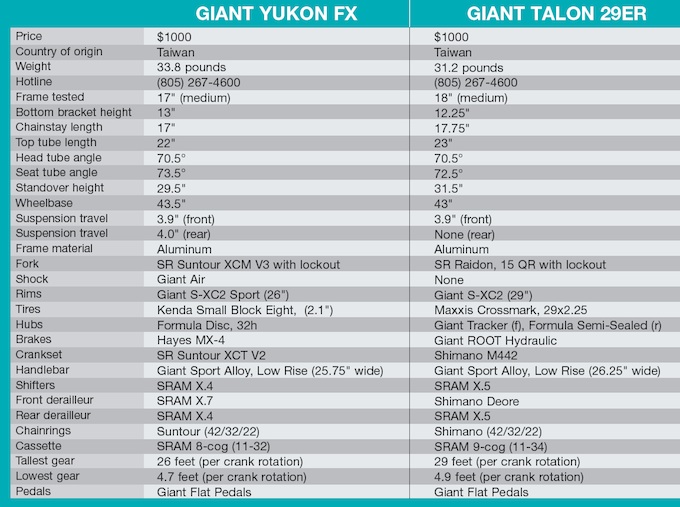 BUYING ADVICE
We would choose the Talon 29er over the Yukon FX for both beginners and those who cap their bike budget at a grand. The Talon 29er outperforms the Yukon FX in almost every category, including climbing, shifting, cornering and descending. The Talon 29er’s ride is slightly rougher, but come on, there is no such thing as a “comfort” mountain bike. If you are a novice, you will benefit more from the Talon 29er, as it will teach you to be a better rider by forcing you to seek out the smoothest and fastest lines on a trail. It will make you more attentive, requiring you to plan out your moves. Ultimately, the Talon 29er will keep you honest.