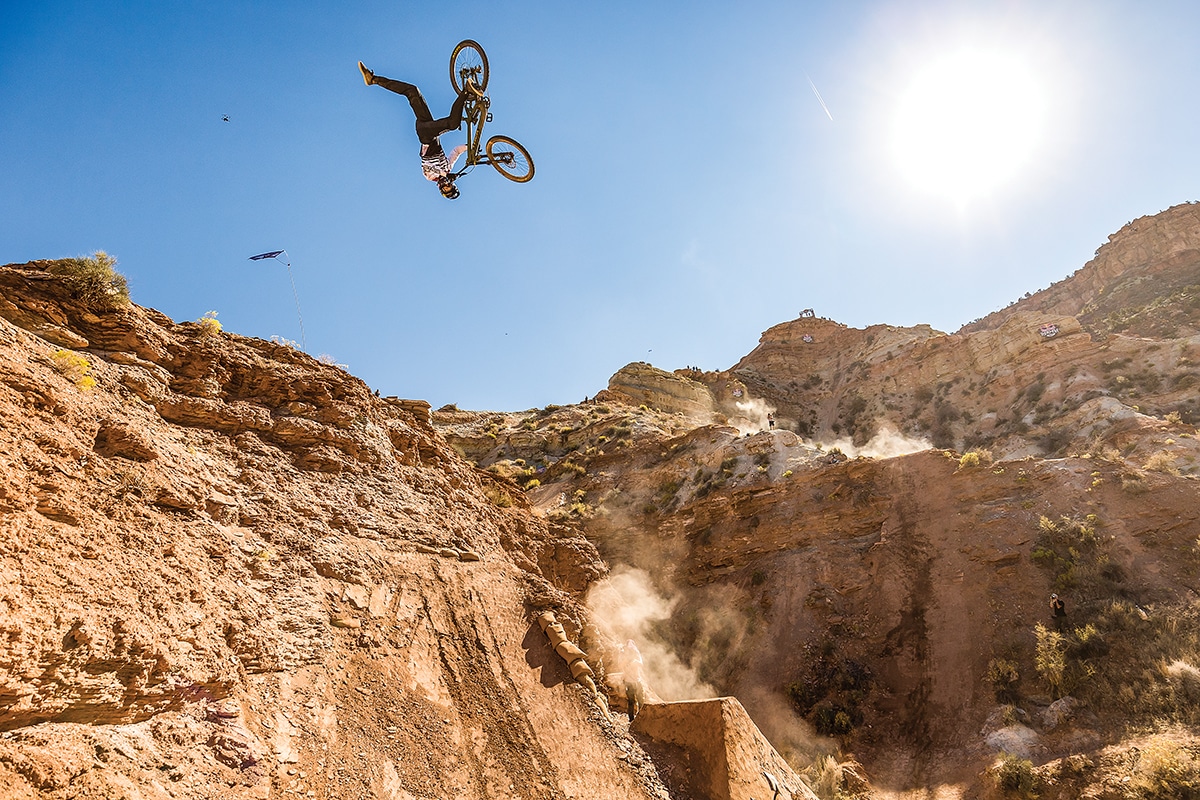 We probably don’t need to mention that nearly all of the mountain bikers in the world would be better off if they didn’t try to ride the way Brandon Semenuk does at the Red Bull Rampage. Photo by Garth Milan/Red Bull Content Pool

Editor’s note: Gene Hamilton has been training and coaching both amateur and professional mountain bikers for years. Some of the best riders we know, including downhill and enduro stars Mitch Ropelato and Cody Kelley, have gone through Gene’s training and reported how much they benefited from Gene’s coaching. Gene recently shared the following tips with some of his clients and agreed to let us print them here.

ARE YOUR GOALS THE SAME AS A PRO RACER?

Are you in your 20s or 30s? Pro riders are probably younger, stronger and more aggressive than you are, and their goal is to win races.

When I coach pro racers like Mitch Ropelato and Cody Kelley, I realize they aren’t the same as most riders. They are younger versions of me (and now much better versions of me) when I raced in the pro class.

Being stronger, more aggressive and getting paid to do well in races gives pro racers a different goal than most avid mountain bikers have.

Different goals require different methods. I have found quite a few situations where you might not want to ride like a pro. Some involve different equipment, some different mindsets and some completely different skills.

Mountain bike skills trainer Gene Hamilton says that a lot of us would probably be better off if we didn’t try to ride like the pros. We’re pretty sure that would apply to most racers who might feel tempted to try and ride through the rocks on the Maribor World Cup course the way Aaron Gwin was doing it here in 2019. Photo by Boris Beyer/Red Bull Content Pool

DON’T TAKE PRO LINES WHEN YOUR GOALS ARE DIFFERENT

Have you ever heard the saying, “Don’t take the smooth line fast, take the fast line smooth”? I learned that from a teammate years ago. Everyone whose goal is to go as fast as he can needs to learn and live that. I’ve taught that to my students for years.

Taking the fast line smoothly often means going straight and using various methods to float over the rough stuff. Bump-jump, bunnyhop or simply unweight over anything that might slow you down. Then, pump the backside of the landings to gain speed.

Doing this well has been my meditation for years. It keeps me focused, in the moment, and it provides instant feedback. It rewards you by avoiding impacts and allowing you to accelerate down the trail.

You also immediately know when you mess up, as you “eat the handlebars” when the bike slows and your body keeps going, causing you to do a full-strength push-up. 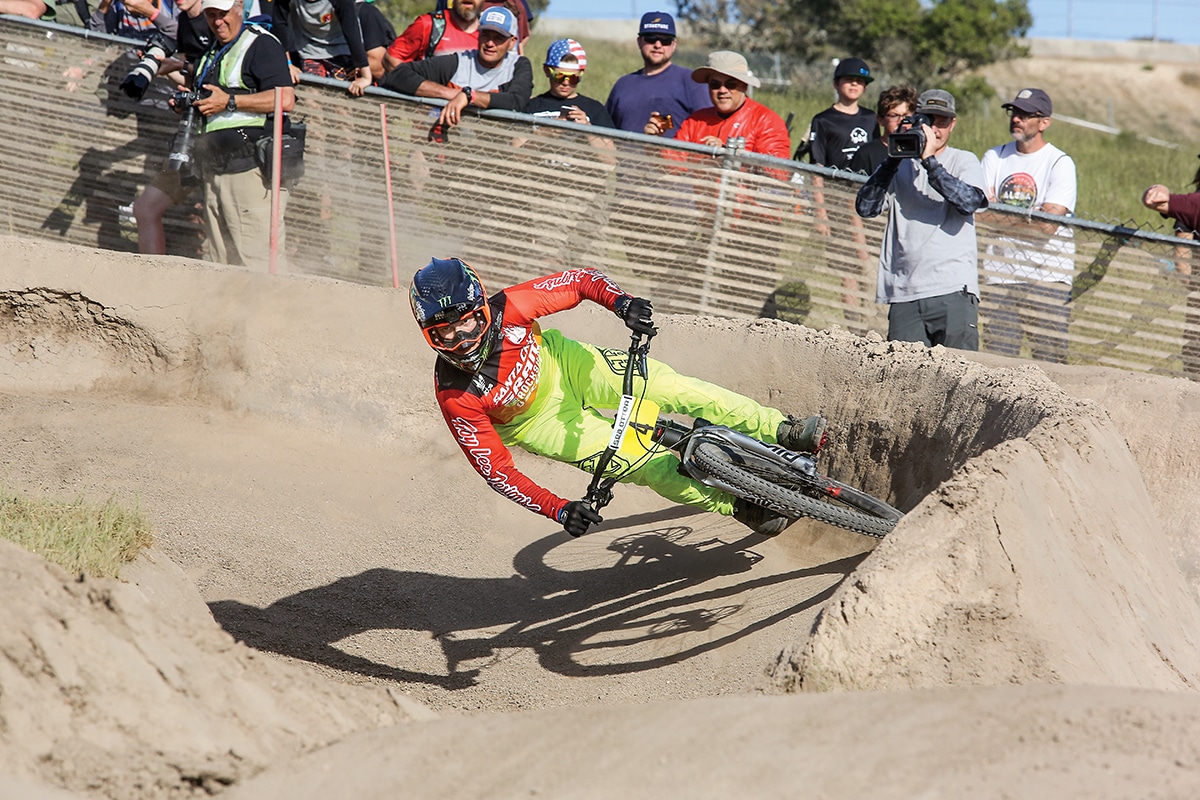 WHAT IS YOUR GOAL?

Is it to have fun, ride with more confidence and/or not hurt yourself?

Well, depending on your goals, you might actually want to take the smooth lines at medium speed! I’m 54. “Taking the fast line smooth” can be exhausting now. Floating over the rough stuff often takes speed and explosive movements, two things I find myself with less of as I age.

I crashed hard on New Year’s Day 2020, and it woke me up. My priorities have changed. I can’t be broken and provide for my family, and I can’t coach when broken.

Since the crash, I have backed off to 90–95 percent of my former pace. When going that pace, descending is different. I don’t have the momentum to float over some of the rough stuff, so sometimes I have to take the smooth line fast instead of taking the fast line smooth.

Taking the smooth line fast is actually pretty fun, though; it won’t win any races, but you take less of a beating. It’s much calmer, and you’re not overloading your mind with hundreds of split-second decisions a minute.

Believe me, Aaron Gwin takes way faster lines than I do because he is better and much stronger than I am.

Aaron’s lines scare the heck out of me! Anything as small or smaller than a Honda Civic, he just goes through or over. His lines are insane. 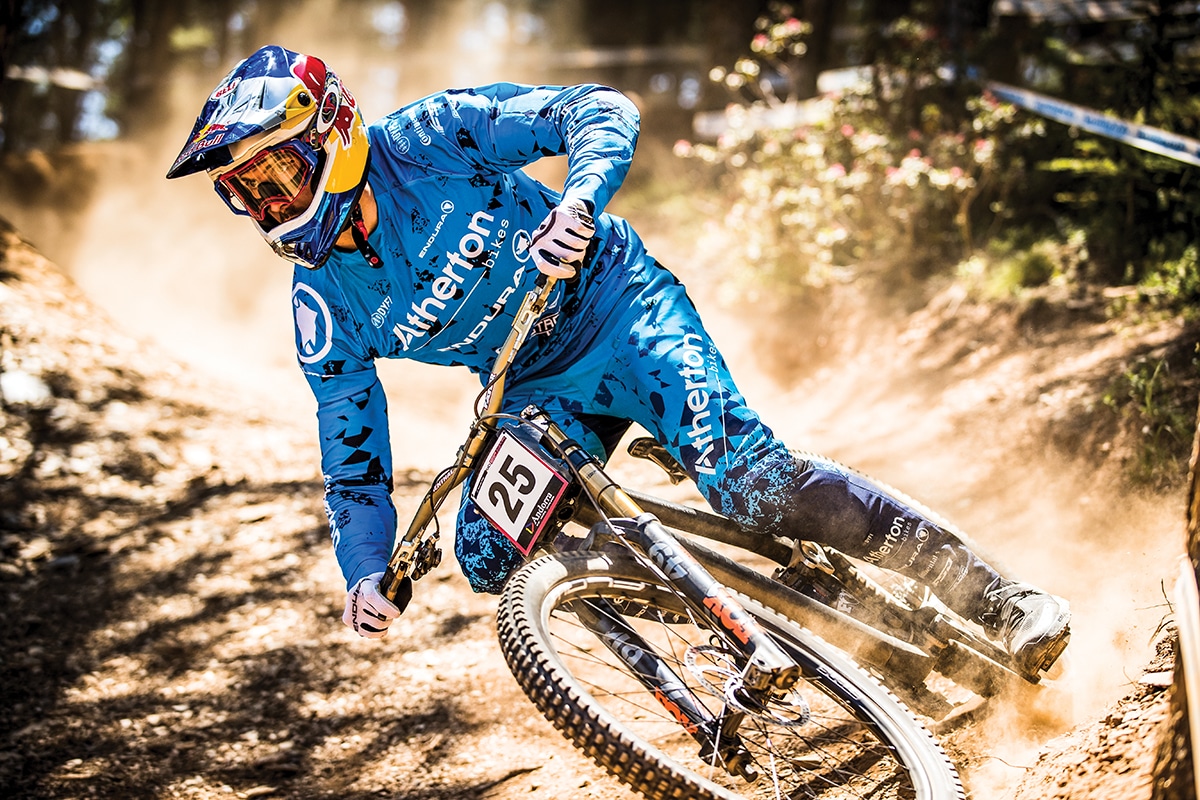 THOUGH THEY WON’T SCARE AARON GWIN, MY LINES MIGHT SCARE YOU

Based on our goals, our fitness and our skill level, what we think is the fast line changes greatly.

I honestly never realized how mentally exhausting it is to ride at the edge of your ability until I decided to back off a bit. The way I have descended for the last 30 years produces a massive rush—not just an adrenaline rush and dopamine rush, but a brain rush, too. It is super intense, like a drug, hence my addiction.

RIDING JUST A LITTLE SLOWER IS A COMPLETELY DIFFERENT SPORT, LESS INTENSE AND MUCH MORE RELAXING

Riding like this doesn’t wear me out nearly as much as “charging it” does.

A wise man once said, that our goal isn’t elation; the goal is an even keel. We can get too happy, and when we get too happy, we can’t maintain it and we will crash later. As a young man, I found that defeating. I wanted the happiest happy ever. As a middle-aged man, I have learned to appreciate the Buddhist wisdom. Apparently, it even applies to mountain biking!

I also missed a lot of fun lines, and isn’t the number-one goal of mountain biking to have fun? Following my “slower friends,” I have always found them to be more creative than I am. They playfully look for little “hits” to jump off of as they zig-zag down the trail. It used to drive me nuts! Now, I enjoy following them, seeing and hitting all the fun lines that I missed while seeking out the fast lines.