Zap’s Back To The Future Column

The big role that little wheels played in mountain biking

Before entering the parking lot that had been turned into a type of BMX play zone, I couldn’t help but sit on the curb across the street and pause for a moment. “Egads,” I thought, as I watched a dozen or so grown men riding around on their tiny 20-inch-wheeled BMX bikes and sharing stories of their glory days. “Is this how my friends and I act when we get around old motorcycles and mountain bikes and reminisce?”

In some respects, I could understand their fascination with the micro-sized bikes. After all, back in the ’70s, I, too, was a crazed BMX fanatic. Yeah, the ’70s, as in when the sport of BMX was in its heyday. I know that BMX is actually now an Olympic sport, so it’s as big time as it could ever be, but it really isn’t.

While getting old is not always something worth celebrating, being old does have its benefits, especially if you were able to come of age in SoCal in the ’70s when the sports of BMX and motocross were skyrocketing in popularity.

Whereas today’s BMX racing is defined by elbow-to-elbow wind sprints on smooth, polished surfaces, many of the back-in-the-day courses were rough enough to give challenge to a modern full-suspension mountain bike.

My first BMX team was comprised of all the kids in the neighborhood who dreamed of riding motocross someday. We called ourselves “Schwinn Sliders.” To earn the chance to wear a team sweatshirt, everyone had to be able to bunny-hop a school bench, do a wheelie for a block and complete a lap within a certain time on one of the many homemade courses we’d carved out in the Hollywood Hills.

I remember we once had a big race-off against the kids from Bancroft Jr. High that started above the Hollywood Observatory and descended down into Griffith Park. Knowing that longer cranks provided more torque (and hence a good start), I swapped my 160mm cranks for the longer cranks off my brother’s 10-speed. Sure enough, out of the 20-plus helmet-less BMX marauders stretched across the fire-road start, I got the holeshot and took an early lead.

Unfortunately, what I forgot to consider was the effect of the longer cranks on the bike’s ground clearance; just about every pedal stroke would bottom out on the rock-strewn course. Alas, straight to the back I fell.

My real shot at the BMX big time came in 1975 when I got a factory ride with an overnight brand called Prince Bicycles that provided me with two bikes, race entries and a seat in a team van that took a motley crew of dirt-encrusted kids to all the weekend events.

The bikes were pretty crappy, but we were allowed to customize them as we wanted. I chose the model with a double-crown rigid fork. I painted the rims red and ran a pixie banana seat with cantilevered seatstays. Trick!

All those BITD notions came rushing back to me after I eventually found myself walking among the bikes and overhearing a myriad of conversations that all started with the serial recantation of, “Dude, remember when…?”

Truth be told, the rise of BMX was due to three factors: Initially, it was the Schwinn Stingray, which was a do-it-all bike for the masses that provided a sturdy entry into the berm-bashing world. And, of course, there were also all the older motocross riders that so many of us BMX youngsters looked to emulate.

But, it was also an upstart industry filled with ingenious and industrious individuals whose efforts mirrored those of innovators who were passionately advancing the sport of motocross.

Like the Schwinn Stingray, Honda’s 1975 125 Elsinore provided up-and-coming MX racers with a palette of accessories (e.g., up and down pipes, radial and porcupine heads, moved-up and laid-down shocks) whereby they could create their own personalized MX masterpiece. We did the same with our pedal bikes. 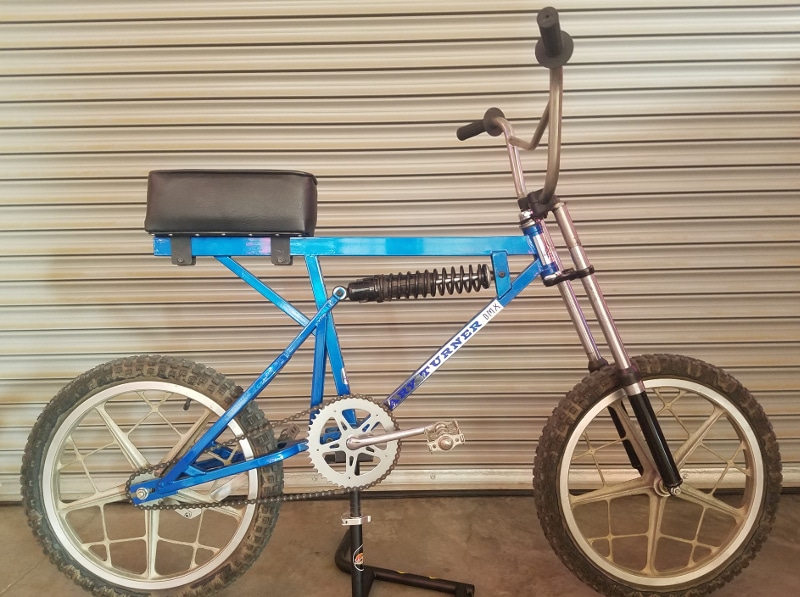 And speaking of masterpieces, the main attraction of this night’s festivities was the unveiling of a resurrected full-suspension BMX bike that Gary Turner had built back in 1974. You see, long before GT Bicycles (as in Gary Turner) became one of the biggest mountain bike brands in the world, Gary was welding BMX frames in his garage. The GT monoshock was built with steel square tubes and rolled on a pair of the famous Moto Mag wheels with a custom  fork taken off a Yamaha MotoBike.

The Bottom Line? The roots of mountain biking came from many different directions and they should all be remembered and appreciated.