When good friends and competitors make for a good photo

As the old saying goes, “Beauty is in the eye of the beholder.”  When it comes to writing (and reading) columns, one person’s good column could just as easily be another person’s worst.

In all  my decades spent documenting the sport, I have written 1000s of columns, some I really liked and thought made good sense, others, well, not so much. This one, which appeared in the  July 2018 issue of Mountain Bike Action, is one that genuinely made me feel good to write – and afterwards, read. The reason why I’m not sure, other than it captured an awesome moment in time when I was able to grab a quick photo of two  of my good friends, who on paper, were sworn enemies due to the suspension wars that swirled around them.

While over the years I ‘ve frequently  heard  a myriad  of opinions on what defines mountain biking, to me, this photo I shot of  (Manitou creator) Doug Bradbury and (Rock Shox creator) Paul Turner sharing a friendly embrace at a race in Durango, CO back in the day  does the trick.

As the two resident “old guys” at Mountain Bike Action, John Ker and I have spent many, many hours together. From years of bike test photo shoots in the middle of nowhere, to a handful of tag team efforts at NORBA Nationals and the North American Handmade Bicycle Show, we’re our own version of Abbot & Costello.

Beyond the fact that John and I are both inductees in the Mountain Bike Hall of Fame, we really have little in common. After a hard day in the field, John is content to go to Del Taco, order sparingly off the senior menu and ask for a cup of water.

Me? Not even close. I actually get insulted that anyone refers to the gruel served up at Del Taco as “Mexican food.” I hate to come across as bordering on effete, but if the chips and salsa aren’t same-day fresh, if the carnitas haven’t been simmered just right, and the margie isn’t doused with just a skooch of triple sec, I find nothing to be content about.

“Paul and Doug were just a couple of motorcycle fanatics that came to mountain biking and brought with them the realization that rigid bikes were stupid.”

John also has this complex notion about safety that I’ve never been able to wrap my head around. There’ve been a few times when we’d be tooling along in a rental car under less than desirable weather conditions. From raging rain storms (North Carolina) to white-out conditions (Colorado), JK would fixate on the lack of visibility due to my reluctance to use the windshield wipers. As John would nervously sit with beads of sweat rolling down his forehead, I would shrug and remind him that there is no challenge in being able to see where the traffic lanes end if we can actually see where they end. Makes sense right?

THE BIG LIE
Now that I think about it, there is one thing that JK and I do have in common – we’re both chronic liars. As awful as that sounds, it’s really not. See, John (who after all, was inducted into the Hall of Fame for his photography), and to a lesser extent myself, have spent that last few decades repeatedly pressing our fingers on shutter buttons. 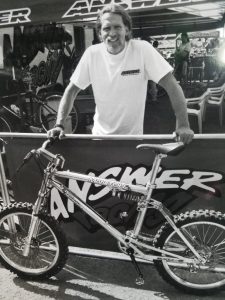 Where I’ve taken hundreds of thousands of photos, John as easily taken hundreds of millions. Where our predilection for lying has most often raised its head is when we’ve used the phrase, “just one more time” in cajoling test riders to re-do an action sequence. We know we’ve overdone it when the frustrated test rider will look at us and ask, “How many more just one more times?”

Over the years there have been a few shots of mine that I would deem of historical value especially because I didn’t have the chance to say “Just one more.” There was my epic shot of John Tomac in the drops at the Durango World Championships, Valentino Campagnolo riding in the Halloween parade in Moab and many others.

FRIENDS INDEED
What you see on this page is another one of the photos that I treasure. No, there’s not much action to it, just two guys in a friendly embrace. But, if you read my column last month where I referenced to the take-no-prisoners war that took place in the 90s between Rock Shox and Manitou, you would think that the company founders; Paul Turner (left) and Doug Bradbury would never have anything to do with one another.

Paul and Doug were just a couple of motorcycle fanatics who came to mountain biking and brought with them the realization that rigid bikes were stupid. In the confines of their respective garages they imagined a technology that would transform the sport and set in motion a huge chapter of mountain bike history that every modern-day mountain biker can be thankful for. 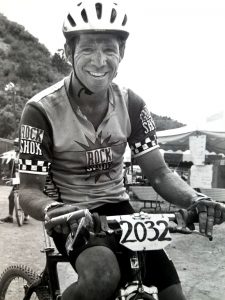 I shot this photo of them in the early 90s and if you think they look happy here, you can imagine their smiles after they deservedly made millions that came with selling their brands to the merger and acquisition types. Both Paul and Doug were as mellow as they came, and I don’t recall their ever being part of the spiteful battle that defined their corporate masters.

Somewhat humorously, in later years Turner would grumble about never making it into the MBHoF and cast blame on the “Crested Butte hippies” who he thought conspired to keep his name off the ballot (back then the MBHoF was located in Crested Butte where Doug was a local).

Paul and Doug were my pals and I keep the photo on my wall at home because reminds me of what the true mountain bike spirit has always been about; being friends and having fun on bikes. Their embrace remains as meaningful to me now as it did then. It was a brief moment in time that I was fortunate to capture and if I could, I’d love the chance to say, “Just one more time.” 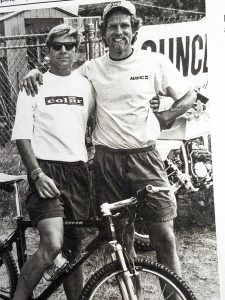 Ask Mbaction: Looking For A Remix