ZAP’S COLUMN: ALL HAIL THE QUEEN

Although I don’t remember when I first met Juli Furtado, I still remember the phone call that brought her into my life. It was early in 1990 when Yeti Cycles founder John Parker was excitedly telling me about some new rider he had signed. She wasn’t one of the NORBA regulars, but instead was a skier coming out of the University of Colorado who’d taken up cycling as a less impactful activity on her knees. Her name was Juli Furtado.

As competitive as the women’s field was back then, there hadn’t been anyone quite as ferocious a competitor as Furtado. Dark-skinned with a muscular build, she brought her New York-bred personality that was both a tad salty and to the point. In short, she fit into the menagerie of Team Yeti kooks just fine.

THAT DAY ON THE HILL

As the history books recount, Juli not only shook the racing world with her fierce determination but also by winning the 1990 XC World Championship title in her rookie year. And, for the next two seasons, I, along with her ever-growing base of race fans, would stand trackside at one NORBA National and World Cup after another as Juli exhibited her never-say-die race craft.

“People don’t realize it, but the whole secret to mountain biking is pretty simple—the slower you go, the more likely it is you’ll crash.”

Despite facing a field of other very determined riders, such as Alison Sydor and Paola Pezzo, Juli was still a favorite for XC gold at the 1992 World Championships in Bromont, Quebec. Alas, it was not meant to be, as her day in the woods came unglued following a crash on the first lap that left her with a dislocated kneecap. She exited the race with fresh bruises and swelling on her legs to accompany the train tracks of old surgical scars. I recall that the post-race mood under the massive GT tent was none too cheery.

Incredibly, when the next day dawned and all the downhillers began queuing up for the chairlift ride to the top of the mountain, there among them stood Furtado alongside her polished aluminum GT RTS 1 full-suspension bike. What the…?

UNDER A CANADIAN SUN

After all the racers had gone up, I rode the lift to the top of the mountain to shoot close-up shots of the riders and their bikes. Noticing Juli sitting alone in the grass, I decided to invade her space to get her account of her nightmare day in the cross-country event. As she was the last rider to go down the hill, there was hardly anyone left on the mountain as her start time neared. And, since not much was expected of her, her mood was far more casual than it normally was when she readied for a cross-country race.

Soon enough, Juli picked up her bike and rolled over to the start house. There was no time spent on a wind trainer, no mechanics to attend to her and no paparazzi. I wished her luck and off she pedaled.

By the time the chairlift delivered me to the bottom of the hill, I could hear French and English voices squawking loudly over the loudspeakers. Obviously, something big had occurred. Turns out that the cross-country champion who had trouble walking following her previous day’s crash and injury had come down the hill with a time six seconds faster than any of the professional downhillers! There were no words! To date, Furtado remains the only rider to win a rainbow jersey in the two different disciplines. 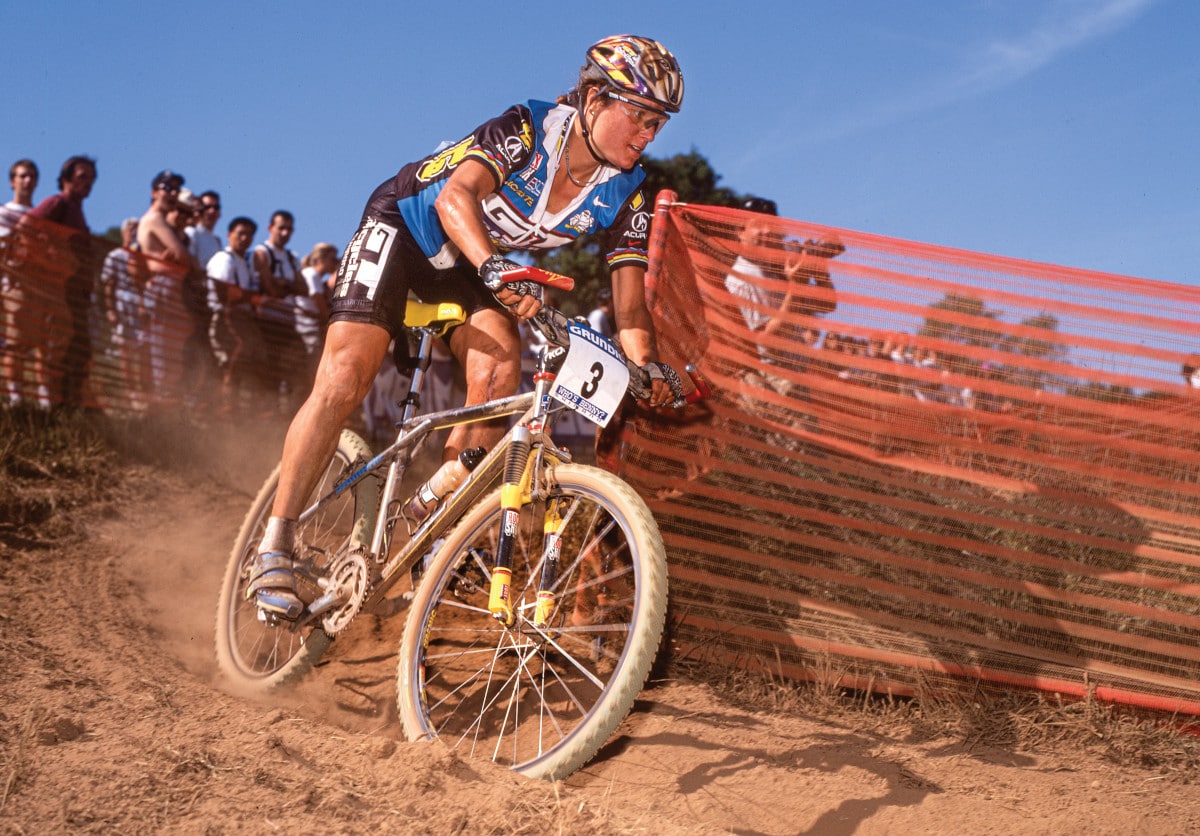 As GT team manager Doug Martin would recall years later, “Oh, trust me, Juli winning, let along competing in the downhill, had never been a part of our master plan. The funny thing is, I don’t think she ever rode the full-suspension bike maybe once or twice before, but without a doubt, that win really helped the RTS platform succeed.”

While Juli and I had many other moments to celebrate in the years to come, I will never forget that day on July 13, 1996, at the Big Bear NORBA National when she called to me from her condo as I was walking to the expo. “Can you believe the news?” she asked, assuming that I’d already heard about something having happened. When it was clear that I hadn’t, she came downstairs to face me with the news that on the day prior, GT president Richard Long was killed in a motorcycle accident on his way to Big Bear.

As big a player as Richard was in the industry at large, he was a larger-than-life personality for both Juli and me. Like so many others, we were crushed. But, there was still a race to win, and hours later, Juli dug deep and decimated the field in the weekend’s cross-country race. As a tribute to the great man, just feet from crossing the finish line, Furtado dismounted her bike and, along with a host of others, all crossed the finish line together.

By the time she retired in 1996, Juli’s record would include her two world championship titles, plus five NORBA National and three UCI World Cup XC titles. Juli Furtado’s dominant, race-winning mettle would set the bar for many racers to come.