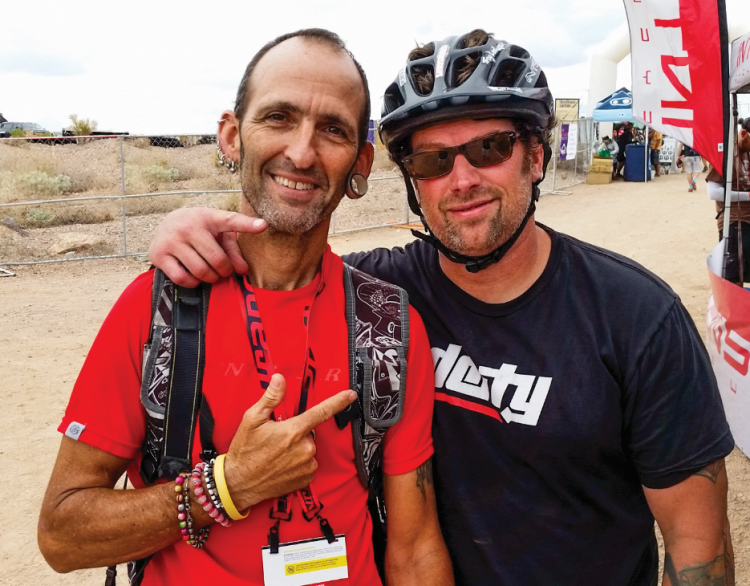 Best Irony of the Year—it was an award that could’ve been found in my tally of “Best of 2017” call-outs in the “Editors’ Choice” story in the January 2018 issue. At the time, inclusion of a Best Irony award was complicated for various reasons. The first being that it brought with it a potential minefield of personal and professional conflicts. Second, the honor itself, while singular in nature, actually involves a collection of disparate issues. And last, I really wasn’t sure how relevant the Best Irony would fare with you the reader.

First, some background: it is certainly not a news fl ash that for the last few years the traditional world of media (including everything from television and radio to print) has been going through some trying times. As has been evident in every other corner of the magazine world, the fall-off in advertising at Mountain Bike Action has been an increasing trend. Okay, “So what?” you ask.

Well, as responsible as I’ve been for the look and feel of this magazine for the last decade, I felt it important to offer a peek behind our business curtain and share some of the reality that defi nes what you see in each issue. The math used to formulate the size of any issue is simple— the editorial page count depends on the amount of advertising sold to pay for those pages. Traditionally, the winter issues when fewer people ride and new models have yet to come on line get thin while those that print in the spring and summer months grow as more people start to ride their bikes. In the last year, that historical trend began to fade as previous ad buys were no longer being made. So what does any of this have to do with the Best Irony award? Well, for the last year we’ve been maintaining a certain level of gallows humor in the offi ce as one advertiser after another would inform us that they would no longer be advertising due to their belief that traditional print media no longer spoke to their potential consumer. The irony was that in almost the same breath that they’d claim the printed magazine was no longer a capable vehicle for their advertising message they would still want to make sure we were testing their products. Huh? If they didn’t believe their ads reached a receptive audience, what good would be achieved by relying on our editorial content to publicize their new bikes, tires, shoes, etc.?

The height of the disquieting irony rose highest when those who declared all things print as DOA—and hailed everything digital and social as life eternal—still wanted to ensure that a product review would have a life beyond a mere digital imprint. “So when,” they would ask, “will the test show up in the magazine?” That these algorithm acolytes were unable to sense the irony in their desires was simply beyond me. To me, it’s like telling your friend he’s a terrible cook and then asking when dinner is served.

Of course, we’re not blind to the notion that as time and technology march on, we have our own responsibility to adapt. Certainly, the reach of social media is vast, but to me, it’s a world with a fl eeting and shallow impact. It’s like a minefi eld of spam, bots and ad blockers that reminds me of the chaotic desert landscape depicted in the movie The Road Warrior. What we try to do as a magazine is provide a consistent, community-based oasis of shared news, analysis and adventure. Oh, yeah, I think big photos are pretty cool too.

In addition to the business side of all this, there is a deeply held personal side as well, which, too, is no less ironic. Concurrent to the industry-wide slide in advertising dollars has come the rise of a bustling new industry—the PR firm. In the last few years an array of such entities have sprung up in the bike industry at a rate nothing short of a truffle bloom in a damp French forest. Even before the fall-off in ads really hit, a wave of bike companies began employing PR firms to get them exposure. Suddenly, old friends we would communicate with about their own products were off limits—“Talk to the PR guys,” we’d be told.

Even writing these words now makes me uncomfortable, because so many of my closest friends now work in the PR field. Some are even former journalists who, I suppose unlike me, saw a clearer picture of the future than I did. No different than the rolling in and out of an ocean tide, success in life often repeats, and for any who have found more profit and future in the PR world, I absolutely do not begrudge them. I’d be lying if at times I said I wasn’t tempted myself.

While some of the PR firms have very capable staff, others have lazily handed off the edit tasks to the young hires with little cycling pedigree. We liken them to “professional hurdles” due to their ignorance of product history and tech details, as well as general ambivalence in being honest. Worst of all have been the PR shills who admit that the price paid for their services was coming at the cost of advertising pages. The irony here? Every time a bike brand says no to advertising and hires a new PR firm to act as an intermediary with editors, they are simultaneously making it harder for the magazines they’re relying on to exist. Some have jokingly pondered a future where one day 6000 PR firms wake up with no magazines to talk to.

One of the moments I’ve found most galling was probably when a PR rookie asked us to collate a season’s worth of printed editorial for a client presentation. Isn’t that their job? Or, there was the time a marketing guy for a brand that quit advertising asked for some back issues so he could prove to his boss that he was getting them the desired amount of press. Talk about being used!

One last bit of irony is the oft-heard accusation that we only give coverage to, and say good things about, the bikes and products of our advertisers. Well, let’s see, in the last year Trek, Specialized, Giant, Giro, SRAM and Schwalbe are just a few who have opted out of their previous ad campaigns, yet we’ve still featured their products in these pages. See, it’s kind of hard to curry favor with advertisers when they don’t advertise.

So, bicycle magazines have found themselves in a bind— welcome to 2018. What’s been the response? I know of other mags that have adapted a policy of only testing products of companies that advertise with them. Others have refused to test any products from companies pitched to them by PR firms. Worse still has been the growing popularity of “sponsored content.” What?! I’m proud to say that at the end of each year we commit more pages to testing products from companies who don’t advertise than those who do. As for sponsored content—well, all I can say is that for as long as I’ve been doing this job, the only sponsors I’ve ever considered for my content have been the readers who were forking over the dough to buy the mag.

So what does all this whimpering about the business side add up to? Maybe just that—whew, I feel better now! But, if it adds up to anything, it’s not only to highlight such ironies but to also promise that we will continue to do our best to provide you with the most informative one-stop shop for everything that impacts the mountain bike world.

Just as I put more trust in what I read in the old-school New York Times over the random and anonymous Facebook and Instagram musings to stay informed on current events, I can guarantee that the collective wisdom, opinion and knowledge found among MBA editors and contributors are exponentially more credible than the collective morass of all things social. At the end of the day, it’s not what is being said but who is saying it that’s important. Our job at MBA is to decipher fact from fiction and provide you with as much credible information about all things mountain bike-related as we can.

Inside the Pros’ Bikes – Payson McElveen

THE BRIDGE FROM BMX