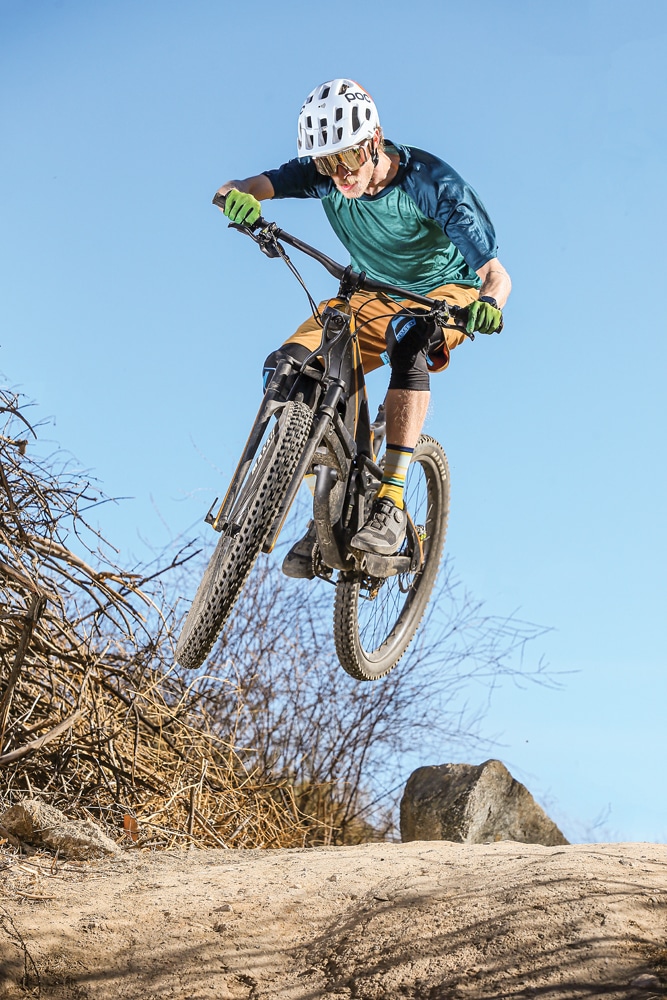 The SCW1 is engineered with a carbon frame, fork, and 27.5-inch wheelset. The WTF (Without Telescoping Fork) design is likely to catch the eye of every single person on the trail. Why has this brand veered away from the proven telescopic designs that we all are accustomed to? Loni Hull, the owner and designer at Structure Cycleworks, believes that traditional telescoping forks make some compromises that negatively affect the performance during a ride.

The WTF suspension system, however, is set to solve the potential issues that can occur with a telescoping fork design. The idea was sparked in 2010 when Hull jumped a tabletop, not realizing the bike he was on had some chainstay issues that resulted in a crack on the landing. This frame failure sent him over the handlebar and on a trip to the hospital with some nasty injuries. That crash made Hull want to design a bike that had less of a tendency to throw a rider over the bars.

Since that time, Hull had an aluminum prototype created to test his front-end suspension kinematics in real life and see just how his linkage platform would respond. The Structure team evaluated all the feedback from everyone who threw a leg over the prototype—from pros to the average weekend warrior—then set out to manufacture carbon production frames. Back in May of 2020, we were able to test an SCW1 for a quick lap on our local trails. We had doubts before our first ride, but soon we were eager to spend more time on the unique bike. A few weeks later, we connected with Hull and got a higher-end SCW1 build for some extended Southern California trail sessions. 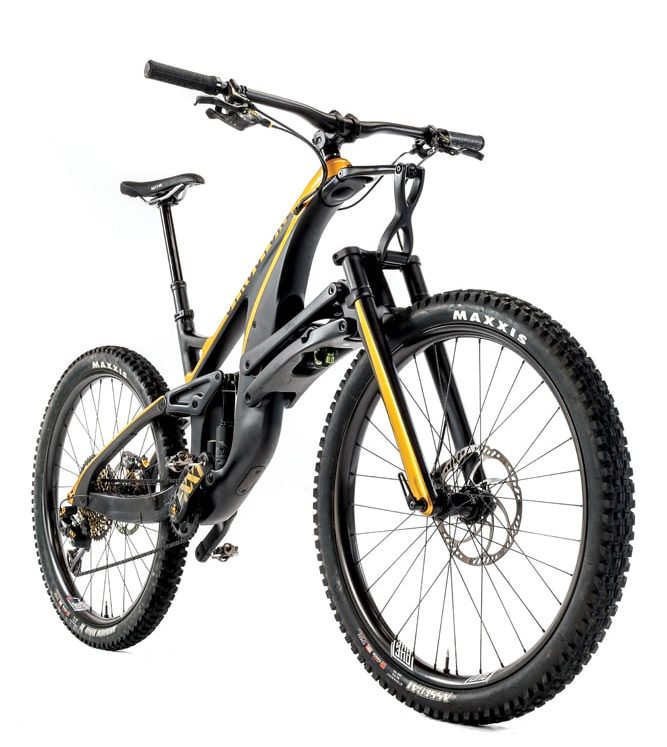 Structure’s WTF suspension system delivers improvements in ride, handling and at-the limit performance with up to a 40-percent reduction in dive under braking in comparison to a telescopic fork design.

The SCW1 is engineered on a 27.5-inch platform, and while the frame and fork are entirely made of carbon. This full-suspension (153mm front/151mm rear of travel) enduro bike is built on the attention-grabbing WTF linkage suspension system. The frame and fork of the SCW1 are engineered to cooperate in harmony. Yes, that means the proprietary design comes as a complete frameset that cannot run an aftermarket front fork. Although wild to look at, the SCW 1 does have some normal bike specs. It features a threaded bottom bracket, Boost hub spacing, compatibility with ISCG-05 chainguides, space for a 27.5×2.6-inch tire and sleeved internal cable routing. 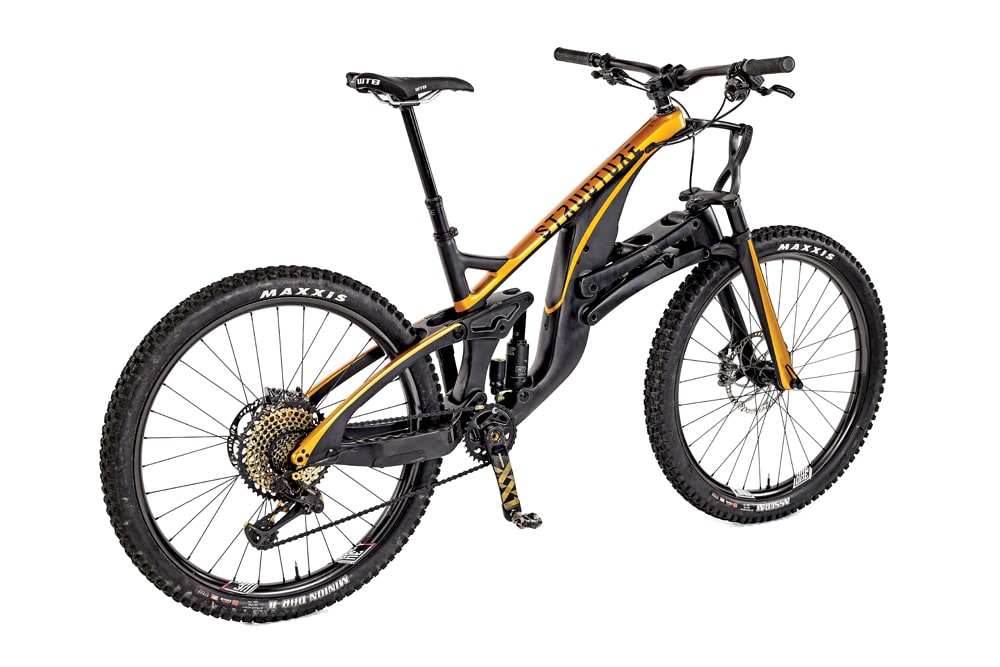 The Structure SCW1 is offered in several complete builds, but can also be purchased as a frameset for $4750 so a rider can assemble the bike with the components he or she chooses. Complete bikes start at $6995 with the SCW1 SRAM GX Eagle build that rolls on alloy DT Swiss wheels. The next build option is priced at $7295. This version is also constructed with the same DT Swiss alloy wheels, but receives a drivetrain upgrade to a 12-speed Shimano XT group. To save weight throughout the bike, Structure also offers the top-of-the-line build that comes in at $9250, which is what we tested. It comes equipped with weight-saving carbon bits throughout. This high-end build includes Canadian-brand touches with robust We Are One carbon wheels and OneUp carbon bars. However, each option is priced out, and every complete SCW1 comes with Magura MT7 Pro brakes, DVO Topaz shocks, Maxxis tires and Cane Creek headsets. 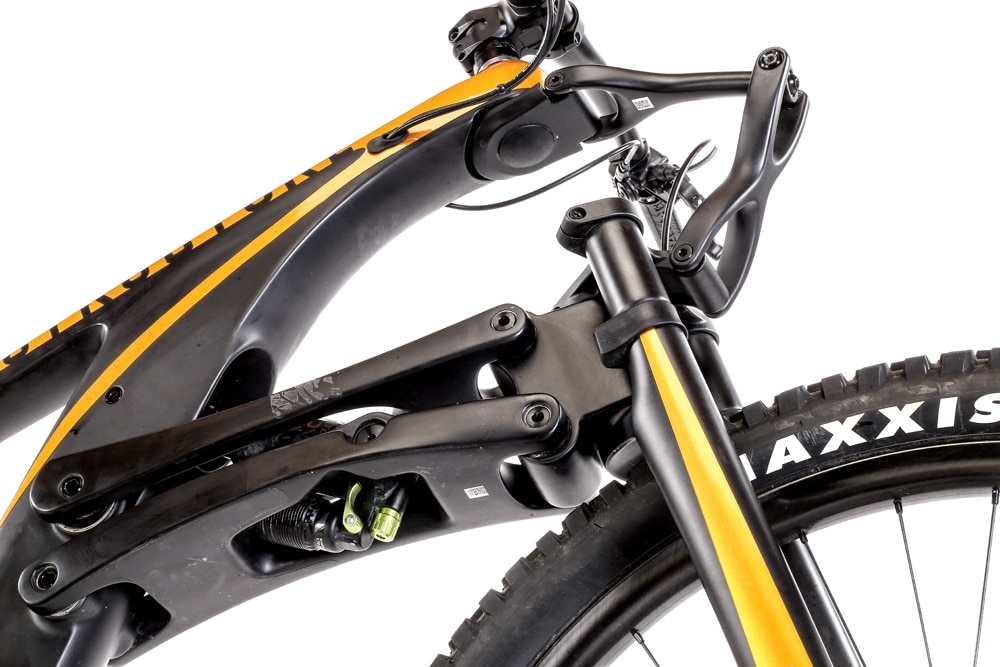 As mentioned, the WTF front suspension platform is based on solving performance issues seen on telescopic suspension forks. Essentially, the front end of the bike will have less dive than a telescoping fork. The WTF suspension system offers five main benefits: stability, sensitivity, integrated chassis strength, size-specific kinematics and practicality.

Stability is gained by the head angle becoming slacker throughout the travel. This causes less brake dive and nearly constant front-center early into the travel. It is quite compelling to imagine a bike that becomes slacker when pushed into its travel. It makes sense to have a bike that doesn’t dive and get sketchy when compressing the suspension more. To give you an idea of the concept, the bike’s head-tube angle sits at 66 degrees. When bottomed out front and rear, the head tube then slacks out to 58.3 degrees. Not only does the head tube change when the suspension is fully compressed, the bike also sits about an inch longer at the wheelbase.

Much like a rear suspension, the front utilizes pivot locations to control the kinematics. With the WTF system, there is more travel to respond to bumps. The sensitive system rotates on 30mm cartridge bearings, allowing control over terrain as tires contact the trail. Although it might seem like a rider would have to take this bike to a special mechanic, there are no special tools needed for a typical linkage service. 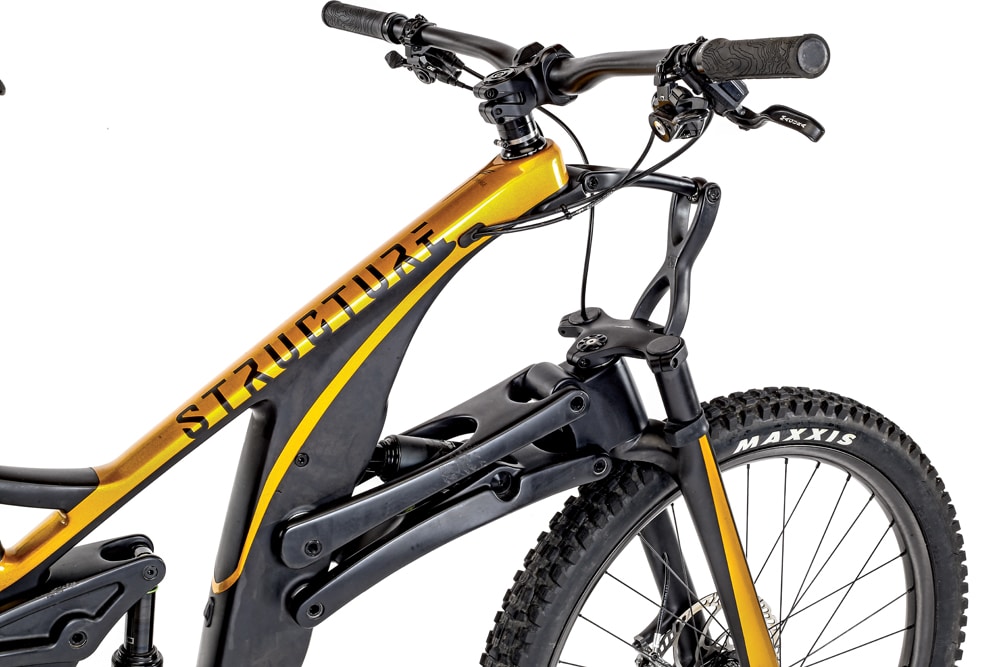 The SCW1’s sizing is not based on the typical criteria; instead, Structure uses what it calls “gravity sizing.” The company has adjusted the location of the shocks and pivots to keep all kinematic properties consistent among chassis sizes. Instead of sizing according to riders’ body sizes with small, medium and large, Structure gives each chassis a gravity rating to designate the level of stability. While the concept sounds interesting on paper, how does it work on the trail? 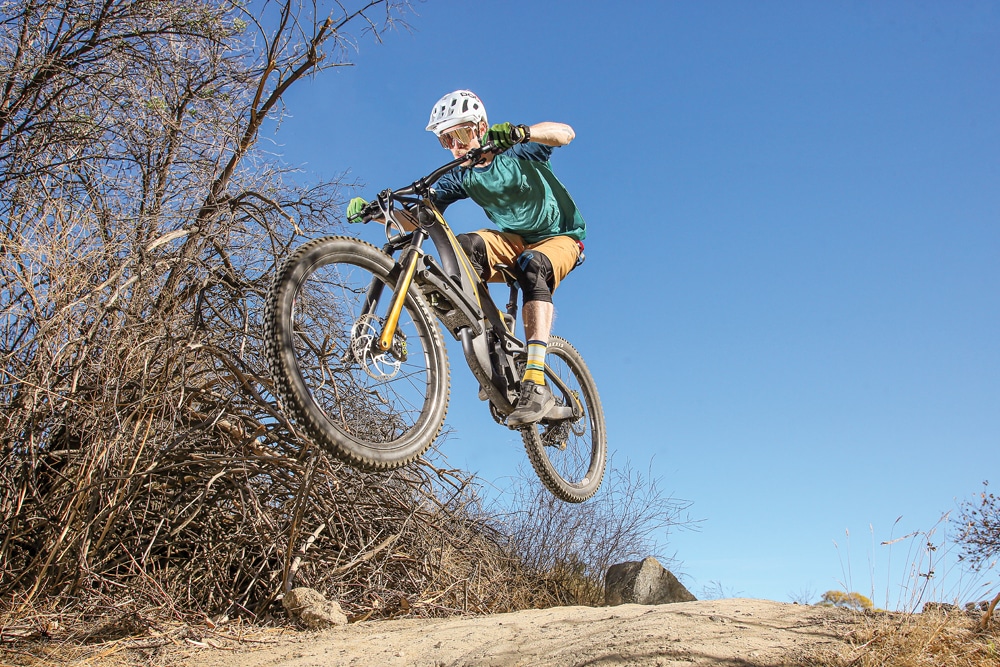 The WTF linkage can spring a rider into the air with ease while soaking up a hard landing.

Structure Cycleworks is making some big statements with this design. We do not think that modern mountain bikes and telescoping forks are terrible by any means, so we wondered how this new bike concept would stack up against a typical trail bike. After setting up the shocks (so weird to say that), we set off into the mountains to see what the SCW1 had to offer. 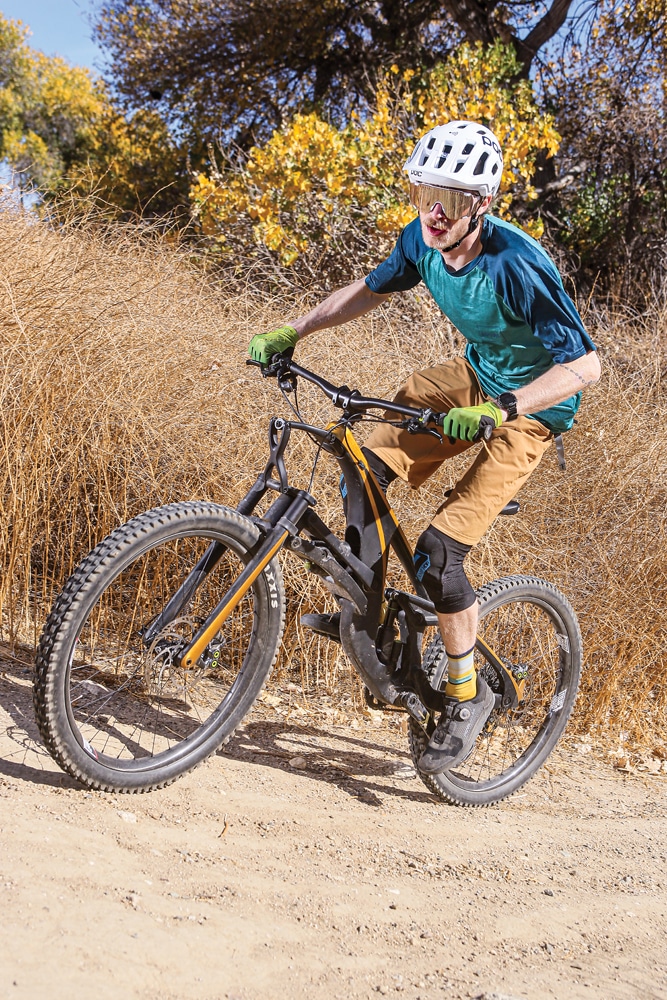 Out of the saddle, the linkage gives support instead of sinking into the travel with every pedal stroke.

Most of our climbs here in Southern California are loose and rutted out, so it can be quite the challenge for the suspension to maneuver while finding traction. Although this high-end bike was heavier than expected, the traction gained with the suspension system on slow, technical climbs was impressive. We ran the bike completely open in the front and the rear on every climb.

Unlike some enduro bikes with 150mm or more of travel, the SCW1 did not make us feel like our power was being sucked away when hammering the pedals. It felt balanced and manageable. At the end of the day, this would not be our first bike of choice for demanding cross-country uphills; nonetheless, it is capable given the SCW1’s travel range. 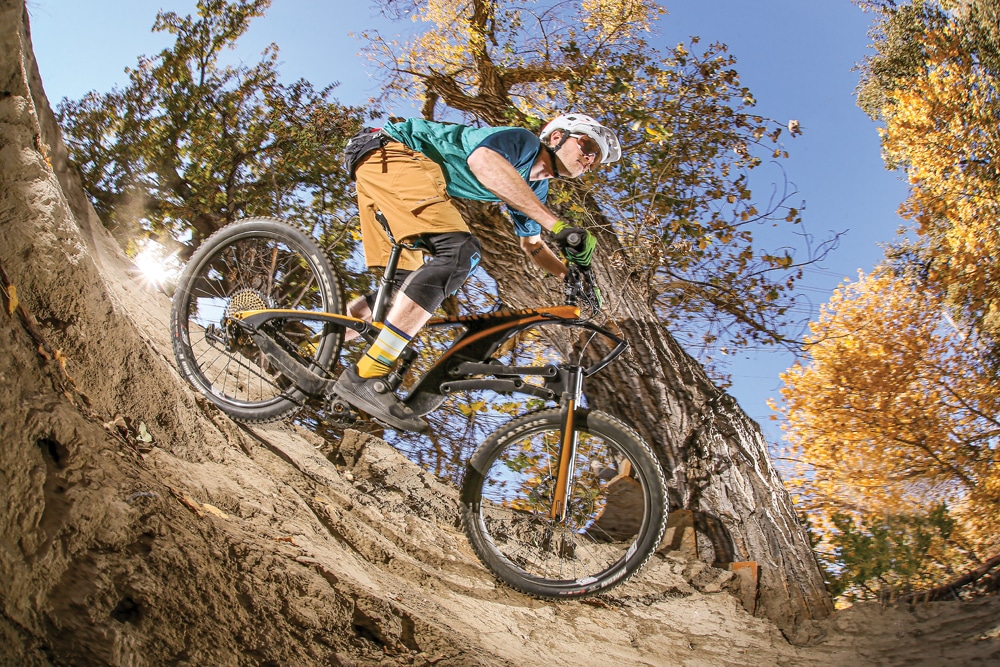 The 27.5-inch wheelbase corners precisely where a rider wants to be. 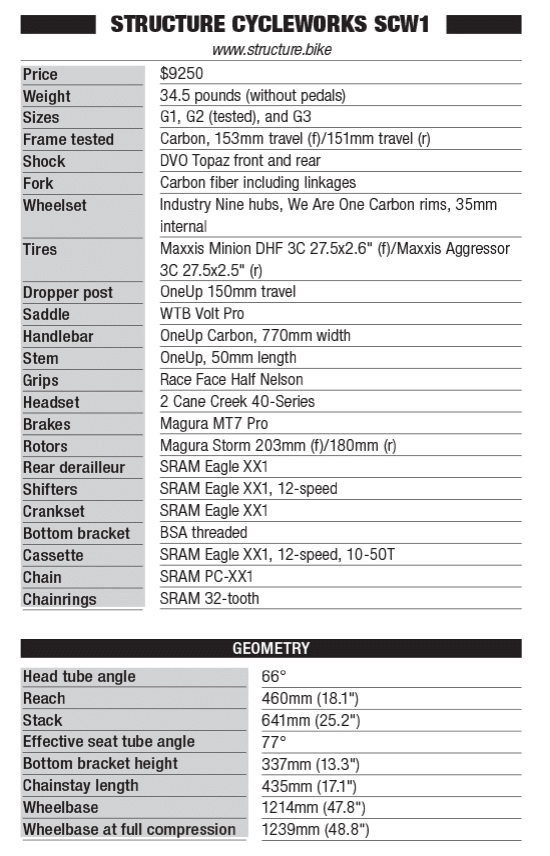 Ready to test the downhill handling characteristics, we initially dropped into a high-speed section that runs through some very bumpy, washboard-like terrain. This is where the bike shined! The linkage suspension system was exceptional in response to fast bumps. This was primarily due to the gain in wheelbase length and the head tube becoming slacker when pushed hard on technical terrain.

Throughout our testing, we rode the SCW1 in steep sections that featured tight switchbacks, technical rock gardens and even some decent drops. Although there is about 150mm of travel, it felt like much more on bigger hits. It takes some time to adapt to the anti-dive quality, but unlike telescoping fork platforms, the SCW1 does not compress and dive into its travel on steep terrain or when pumping the brakes. We even experienced a rear brake failure that forced our test rider to use only the front brake.

Given the design, we were able to grab a fist full of front brake and stay on track without being sent over the bars. The 27.5-inch wheels maneuvered well with the usual snappy response, but we did initially feel like the weight on the back end of the bike was a bit difficult to flick into our preferred position on the trail. We realized this was part of the adaptation process as we learned to place our body position more forward to compensate for lack of dive. 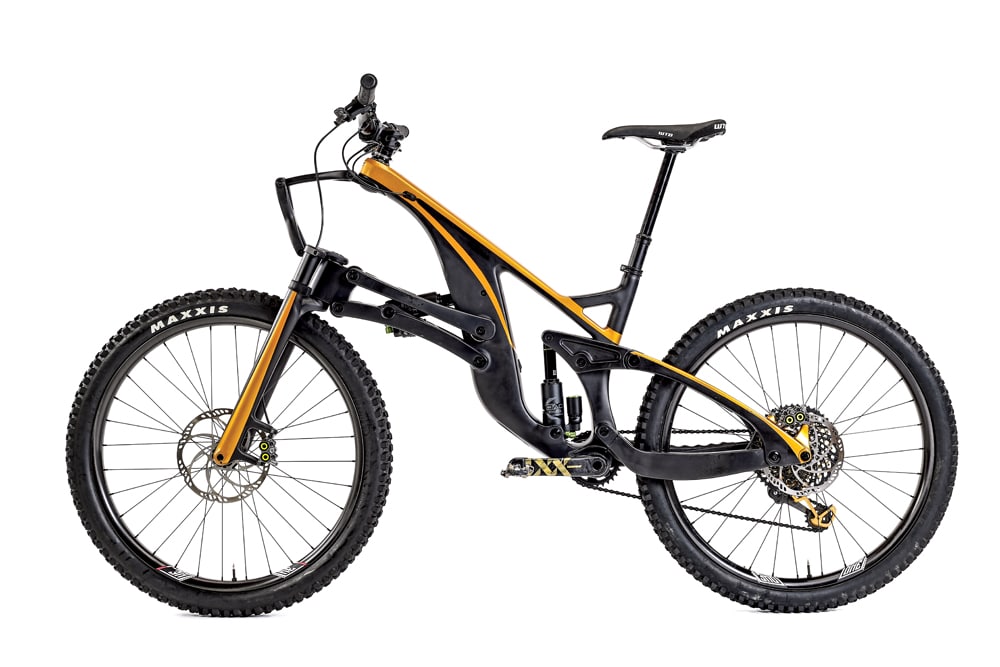 Overall, the anti-dive feature of the front end, created by increasing the wheelbase and slackening the head tube angle, worked well in the terrain where we tested the SCW1. Of course, innovation does come at a premium price. While we spent lots of trail time on Structure’s SCW1, our crew is looking forward to seeing this company evolve. Perhaps there is a mixed-wheel, 29er or even a hardtail in the works. Time will tell, but there is no doubt that the SCW1 will grab the attention of the open-minded cyclist looking for a modern transformation.

B’s Buzz: The Secrets Behind the Pros’ Amazing Feats