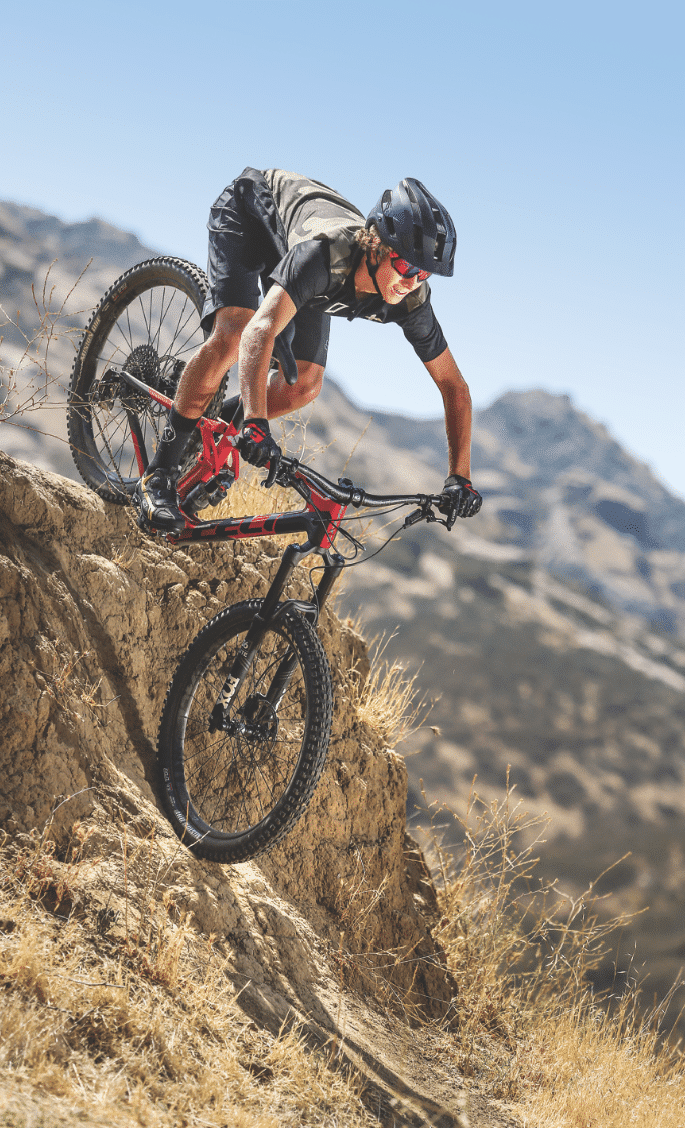 There has been plenty of buzz and hype around enduro bikes the last several years, with just about every major bike brand on the planet releasing new or revamped bikes every other year. Felt has been known to take its time when it comes to R&D, not holding to anyone else’s timetable. Since being acquired by Rossignol, Felt has released several new bikes, including this all-new Compulsion. It has been almost five years since we tested the previous aluminum version, so we set out to see how good this modern enduro could be.

With 165mm of rear travel and long, slack, low geometry, the Compulsion is designed for technical riding and burly enduro racecourses. There are two models of the Compulsion, starting at $4000 and capping out at $5500 for the top level tested. While this is by no means an entry-level bike, it isn’t unattainable. The price points sit in a comfortable range for riders who are dedicated to mountain biking.

Felt took its time designing the new Compulsion, with an updated geometry and frame design to suit the modern rider. Compared to the previous version, the Compulsion now uses a full carbon fiber frame and rear triangle with Felt’s proprietary UHC Advanced layup and MMC InsideOut construction. The InsideOut construction ensures there are no stray fibers inside of the frame to save weight and deliver cleaner tubing. With the high-quality tubing design, Felt uses full internal cable routing and a threaded bottom bracket with ISCG05 tabs to allow riders to run a chainguide. While Shimano hasn’t given up on front derailleurs, the Compulsion is 1x-specific to allow for shorter chainstays and more tire clearance.

The Compulsion uses Felt’s proprietary Equilink six-bar suspension design that has characteristics similar to a four-bar linkage but with better pedaling support. The Equilink has an extra link that connects the top and bottom rockers for a little more pedaling support while not compromising the bike’s descending abilities. To keep the weight down, Felt uses carbon fiber links with a trunnion-mounted Fox shock. The trunnion mount allowed Felt to use a slightly longer shock to reduce the leverage ratio and increase traction.

Compared to the previous Compulsion, Felt slackened the head angle a full degree and steepened the seat tube a touch, along with pushing out the reach. The rear triangle uses Boost spacing to help shorten the chainstays and allow for clearance to run up to 2.6-inch-wide tires on 27.5-inch wheels. 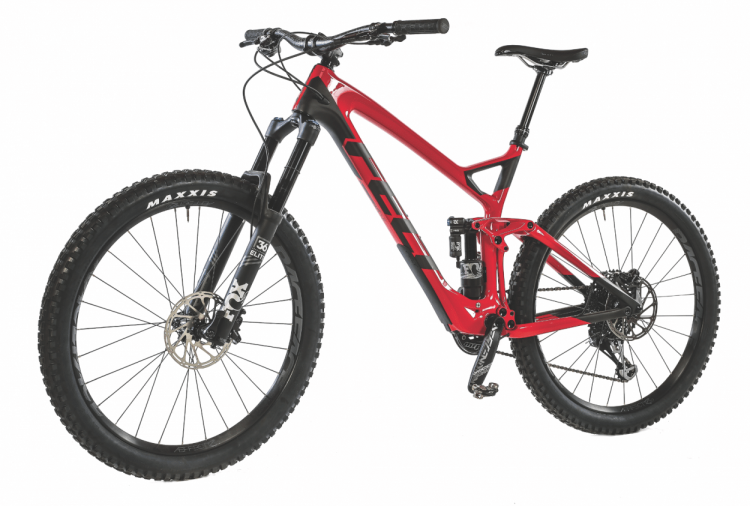 The Compulsion 1 that we tested has a well-thought-out build kit that doesn’t put the bike into the “halo” category but instead offers durable, high-performance components at a fair price. The Fox suspension supplied our test riders with plenty of adjustments, especially the Float X2 shock with its wide range of compression settings. The Maxxis DHF tires were burly and didn’t give us any worries when it came to traction. 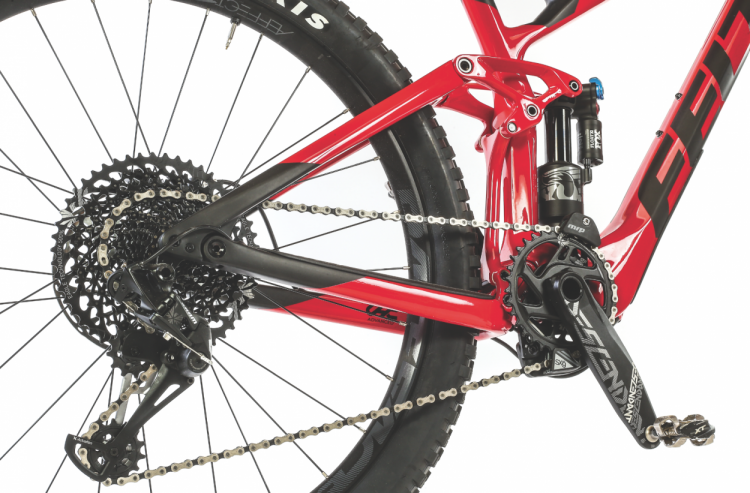 Setting sag: The Fox 36 with Evol air spring is fairly straight- forward to set up. Most of our test riders preferred about 20-percent sag in the fork with the rebound run a little quicker for our high-speed trails. Our test bike came stock with one volume reducer, which worked on our local trails. For a little extra support when charging out of the saddle, we ran the low-speed compression fairly firm.

The Float X2 took a few rides to dial in. Felt gave us recommendations for the high- and low-speed compression settings that proved to be good. We started at 30-percent sag in the shock, but after a couple of rides, we increased the air pressure for a little more support. 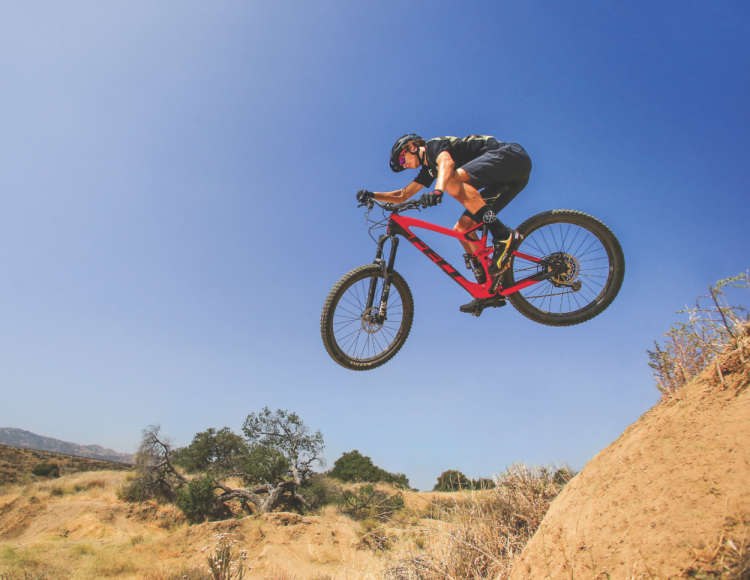 Moving out: Swinging a leg over the Compulsion, the reach is a touch conservative compared to other modern enduro bikes. The stock cockpit felt comfortable, though, with the short 50mm stem and ultra-wide 800mm bars. Some of our test riders did prefer a slightly narrower set of bars. The WTB Volt saddle was comfortable and suited most of our test riders, even during longer rides. Setting our tire pressures, we opted for a little less air pressure than we would normally run in a 2.4- or 2.5-inch tire. Up front, we ran about 18–20 psi, depending on the trails, with about 20–21 psi in the rear.

Climbing: With 165mm of suspension, the Compulsion is a long-travel bike; however, thanks to some clever engineering work with the Equilink suspension platform, the bike pedals fast and efficiently. The suspension exhibits noticeable anti-squat characteristics, even with the shock in the open setting. Out of the saddle the frame is stiff, with the massive, overbuilt downtube responding to every pedal stroke. While the wider 2.6-inch tires aren’t the lightest you can get, they do offer a substantial amount of traction at a minimal weight penalty. Hitting steep sections of trail, the rear DHF tire clung to loose dirt, rocks and roots effortlessly, giving us all the traction we could ask for.

Descending: The Compulsion is designed to rip down the mountain and do it with as much style and stability as possible. Hitting singletrack, the Compulsion felt lively and was easy to whip around and control while not feeling overly zealous when hitting technical lines. While the Equilink sits higher in the travel, the Compulsion has plenty of mid-stroke support with a comfortable amount of ramp at the bottom of the stroke. At high speeds, the rear end tracked terrain confidently and soaked up big hits without a second thought. 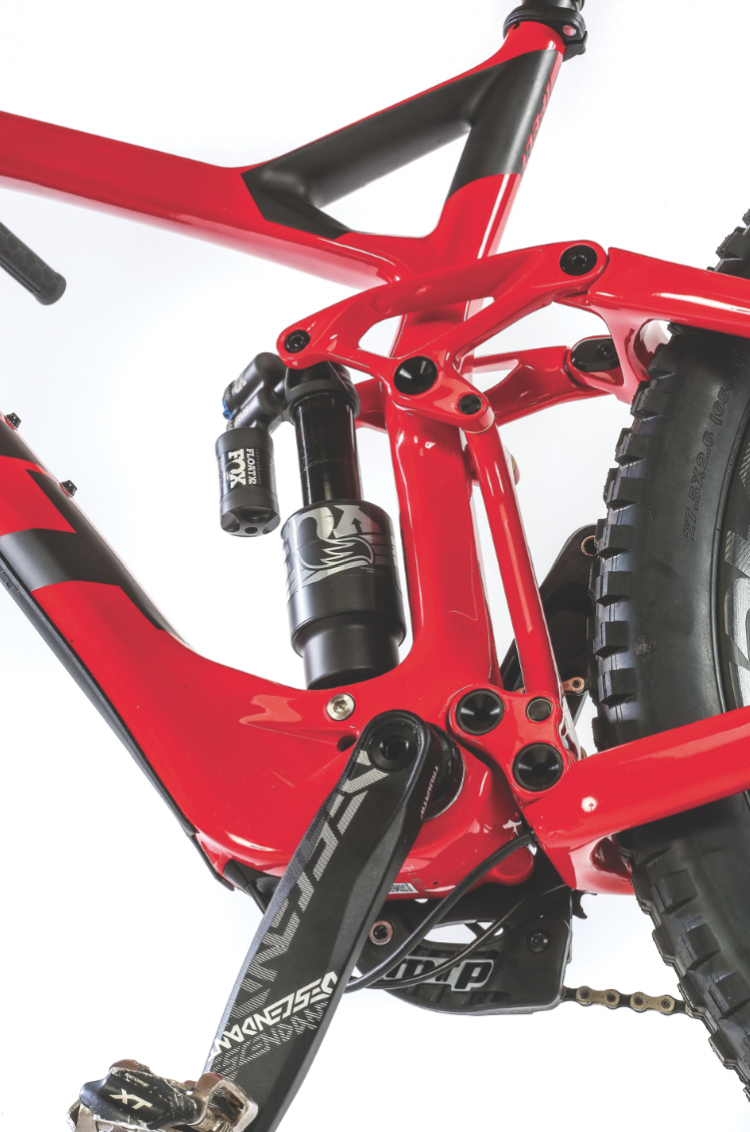 Cornering: Dipping the Compulsion over into corners, the Maxxis Minion tires hooked up confidently with their burly shoulder knobs and stiff EXO sidewalls. The Compulsion is a very lively and playful bike that is easy to lean over in corners and through flow trails and berms. Riding through tight switchbacks, the more relaxed position allowed us to sit up more to comfortably maneuver the bike at slow speeds. 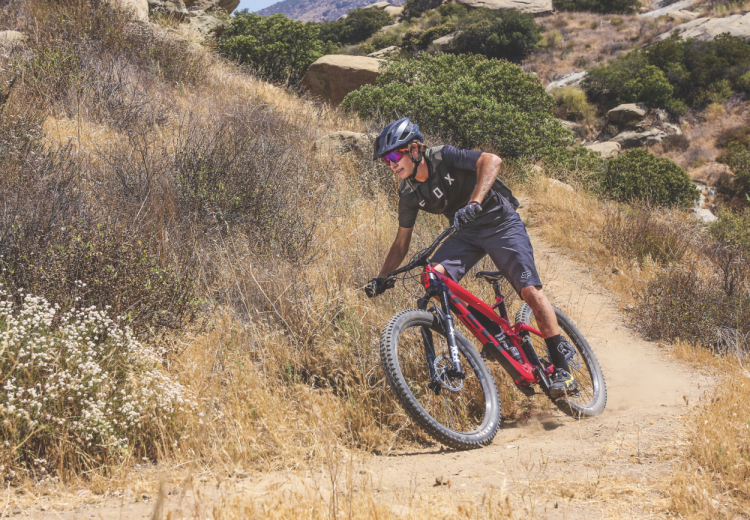 We didn’t have any issues with the build kit on our bike, but some of our test riders agreed that the seat tube is low enough to allow for a slightly longer dropper post for a little extra clearance on steeper trails. The Maxxis Minion DHF tires gave us plenty of traction, but we would recommend swapping out the rear tire for something a touch faster, such as the DHR version.

The modern Compulsion is a seriously capable bike that doesn’t shy away from technical lines or rowdy riding. Overall, the bike is an exceptionally good climber and doesn’t compromise when the trail points downward. If you want a bike that is capable of ripping technical trails and hitting some jump lines at your local bike park, the Compulsion will do it. feltbicycles.com/collections 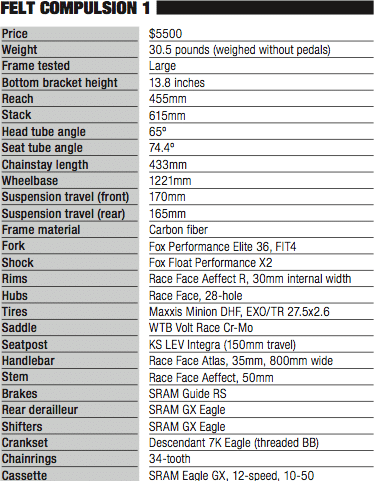 Watch: Life In The Fast Lane With Finn Iles