EURO XC STARS OF THE 90s

Although there had already been a version of the mountain bike “World Championships” held in 1989 at Mammoth Mountain, it was of the unofficial variety and lacked true representation of the “world.” As the history books will record, it wasn’t until the following year that the sport gained true “World Championship” status when Ned Overend and Juli Furtado became the first XC riders to enjoy official UCI rainbow jerseys after their victory on their home turf in Durango, Colorado. 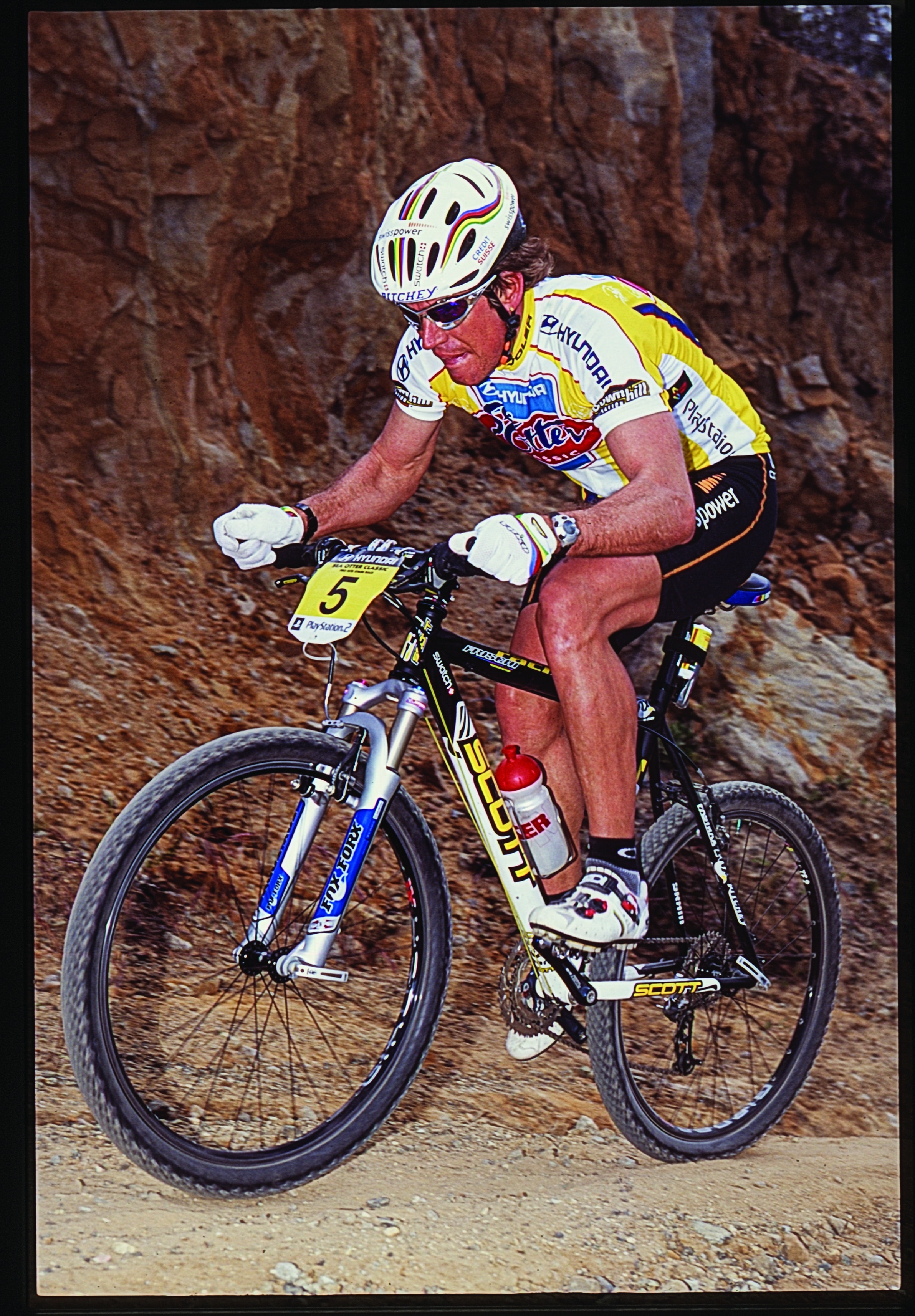 Although there were a few European riders in attendance in 1990 (don’t forget that finishing behind Ned on the podium were future Euro stars of the era Thomas Frischknecht and Tim Gould), history books will also tell the story of how from 1990 on, the Europeans had arrived and would forever be a force to reckon with. While “Frischi” has maintained a constant presence in the sport as both a racer and team owner/manager of the Swiss Power team that helped put the great Nino Schurter on the map, there were many cross-country riders who achieved winning dominance that we thought the modern world should be reminded of.

Briton Tim Gould came to mountain biking after a successful domestic career as a cyclocross and road racer; he dominated the legendary Three Peaks Cyclocross for many years. Along with his original Ace Racing/Peugeot teammate David Baker, Gould arrived in America in 1988. And with his outstanding climbing abilities, he started earning NORBA and World Cup victories.

He finished third in the first World Championships at Durango and took the win in the hill-climb event (yes, that used to be an actual event!). Humble and friendly, Tim suffered health issues during the mid-’90s but returned to racing for Schwinn for a few years before retiring to take a job as a postman in his native Derbyshire.

Like his early Ritchey teammate Thomas Frischknecht, “Henk” came from a cyclocross background and was a multi-time Danish champion in the discipline (in addition to the amateur World Championship in 1992). The “Great Dane” Djernis was a dominant figure in XC racing during the early ‘90s and gained notoriety as a late-season bloomer who delivered three Worlds titles (‘92, ‘93, ‘94). Djernis gained added renown when he made a highly visible (and lucrative) switch from the hardtail Ritchey squad to a full-suspension Pro-Flex. After retirement, he quietly opened a bike shop in his native northern Denmark.

The lanky Dutchman Bart Brentjens (aka “Bartman”) took the first-ever men’s XC Olympic title in Atlanta in 1996, which he added to his World XC title in 1995 riding for American Eagle. Bart was a prolific winner of World Cup races throughout the ’90s, and in 1994 he took four World Cup rounds and the overall title. During his long career, he also took medals in the Marathon World Championship. In 2005, he won the Cape Epic stage race in South Africa and has continued to race on and off ever since. Over the course of his long career, Brentjens rode for American Eagle, Specialized and Giant and ran his own pro team for several years (and rode for it). Bart is now a commentator on the World Cup XC races for Redbull TV.

Norwegian racer Rune Hoydahl was something of an understated star of the mid-’90s. He won 11 World Cup rounds during his career, including one downhill World Cup race, making him the only male rider other than John Tomac to do so. Most of his time was spent riding for Giant, and 1995 was his standout season, during which he won five back-to-back World Cup races.

To say that the half-pint sized Miguel Martinez was one of the more intriguing XC riders of the late ’90s would be an understatement. “Little Mig” was born into a strong cycling family and is the son of former road pro and Tour de France KOM winner Mariano Martinez. Starting out with road and cyclocross racing, he soon found that fatter tires were more to his taste. In 1994, he became the European Junior XC champion, and within a year he was also podiuming at the elite level as well as winning U23 world titles. Miguel finished third in the 1996 Olympics and then won the gold medal in the 2000 games. 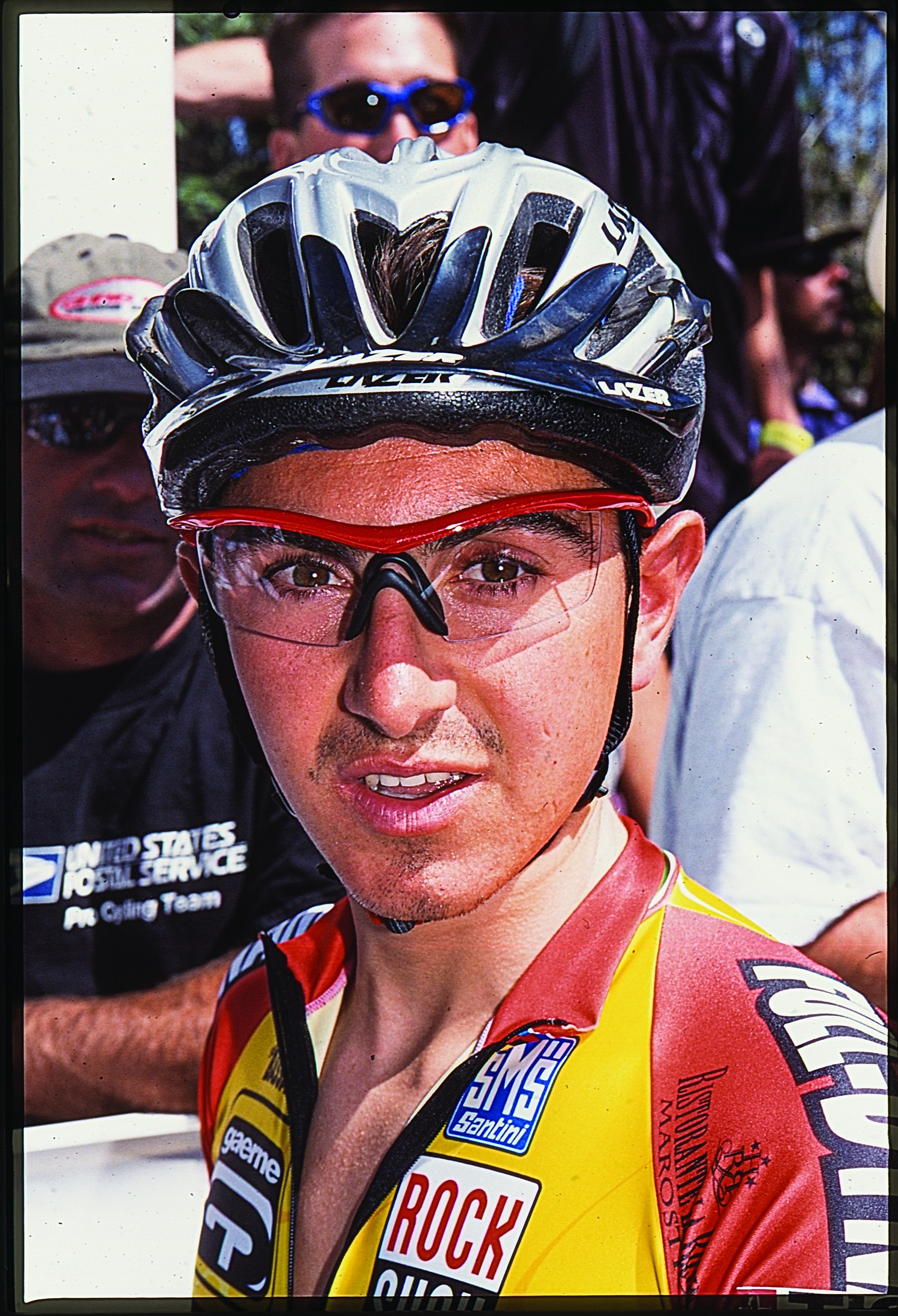 Much of his off-road career was spent riding for Max Commencal’s SUNN team, which ruled the roost in both XC and downhill for several years. For the 2002 season, he signed with the Mapei pro road team and finished 44th in the Tour de France. In one form or another, he has continued racing, finishing seventh in the EMTB World Championships in 2019. Currently, his son Lenny is making waves on the French national cycling scene.

The mild-mannered Italian blonde bombshell Paola Pezzo was very much the face of female XC racing during the late ’80s and early ’90s. It wasn’t just her good looks and fashion sense that garnered her such attention, as her results on the racetrack were just as impressive. 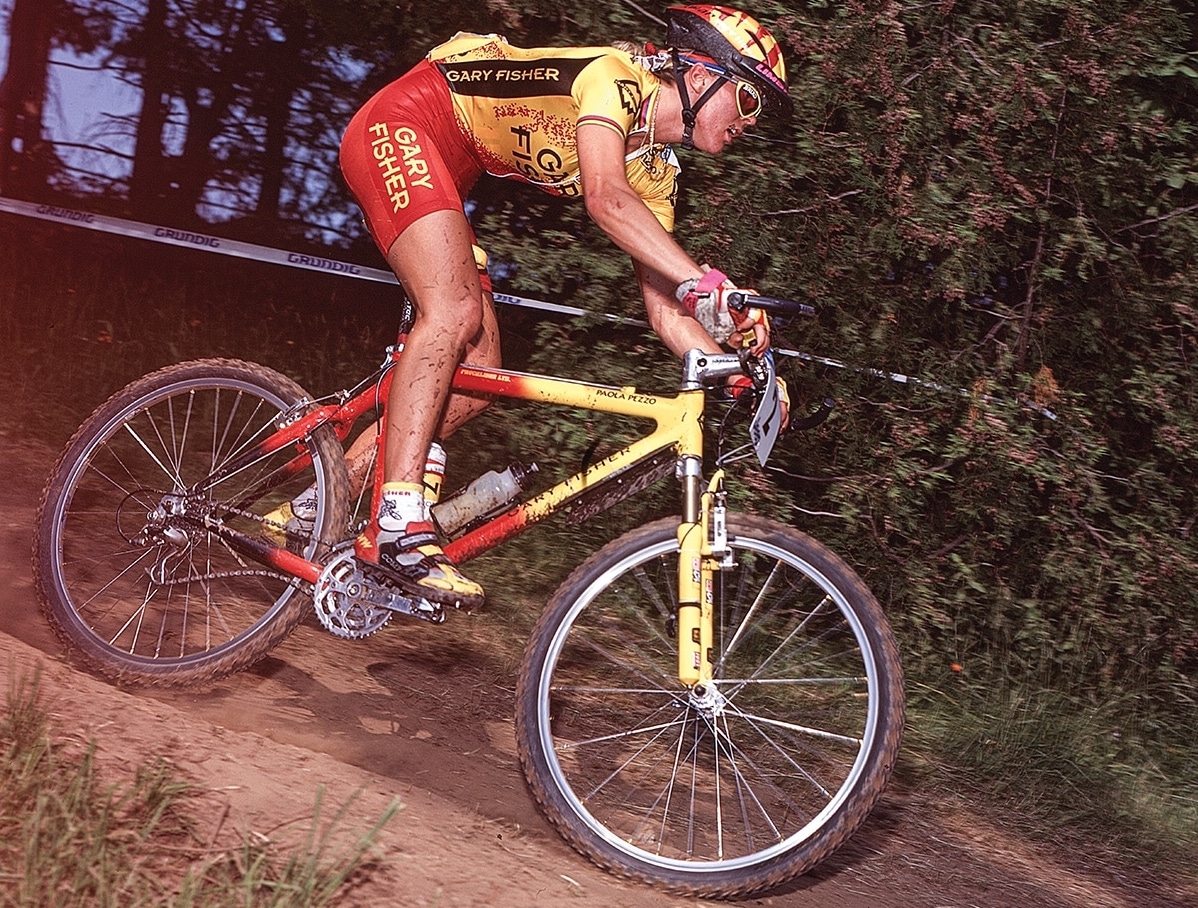 Starting out as a teenage cross-country ski hopeful, Paola started summer training on a borrowed road bike. She soon found out that she was a good climber and was then given a mountain bike to try. The Bianchi team snapped her up, and this was when her coach and partner-to-be Paola Rosola was in charge. Pezzo found her greatest glory riding for the Gary Fisher brand, claiming two World XC titles and numerous World Cup rounds. At the 1996 Olympics, Pezzo duly took the gold medal and added a dose of glamour to the new sport with it. Amazingly, she doubled up with a second Olympic gold in the 2000 Sydney Games.

Marga Fullana started out as a budding road racer and scored medals in junior national championships as far back as 1988. Born and raised on the cycling paradise island of Majorca, Marga soon tried her hand at mountain biking with great results. A large part of her career was spent racing for Specialized, and through the late ’90s and 2000s she won three XC World Championship titles, took Olympic bronze in 2000 and scored numerous World Cup victories. 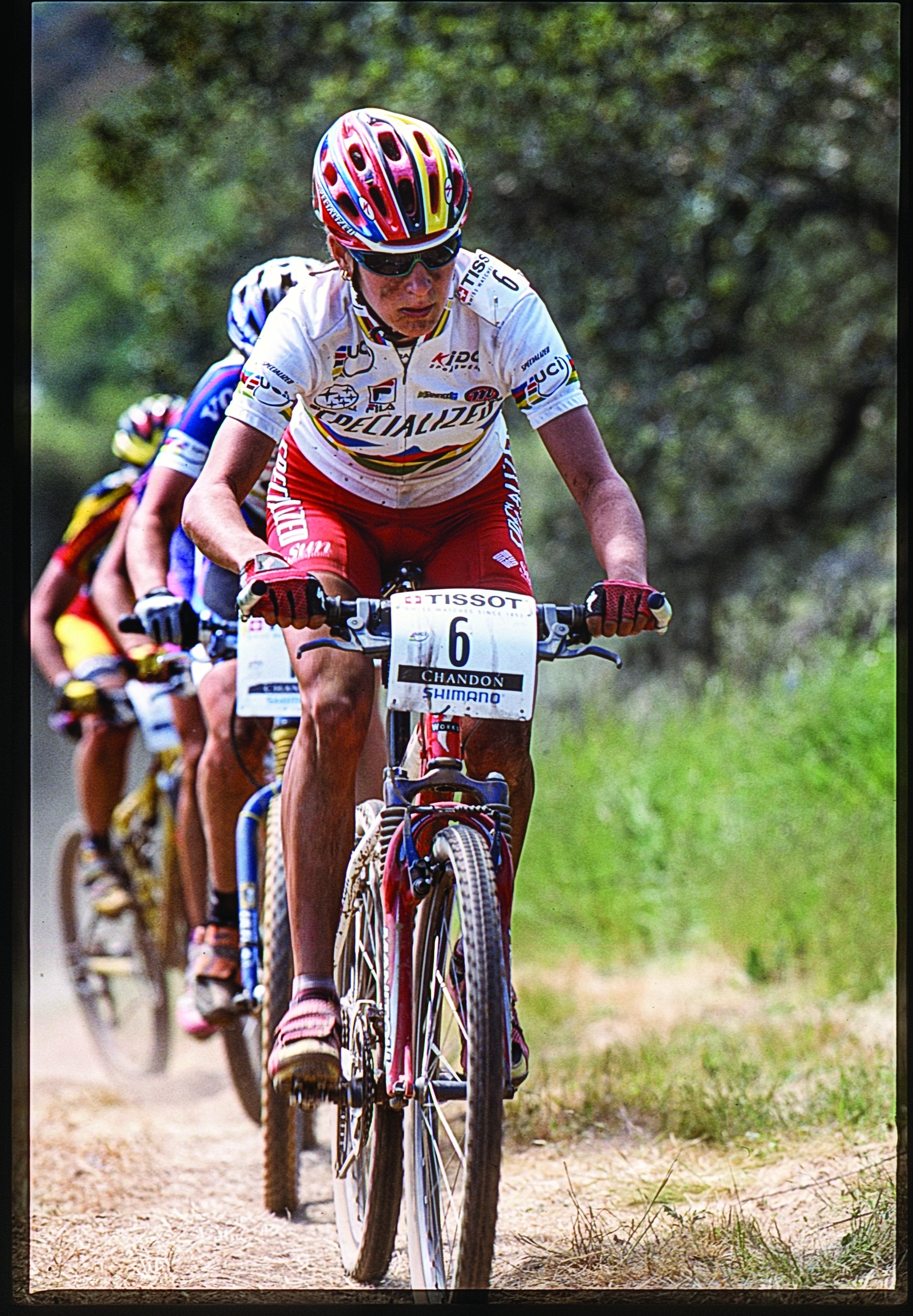 For much of her professional career, she had a close personal and coaching relationship with former Dutch pro road racer Gert-Jan Theunisse, a man with somewhat of a shady reputation when it came to doping. Unfortunately, Marga’s own career would eventually be tarnished when she got caught with a high hematocrit level in 2007 and later admitted to using EPO in 2010.

Hailing from the same region as her older compatriot Silvia Furst, Chantal Daucourt was a formidable and very friendly force on the XC World Cup scene throughout the 1990s. Daucourt spent much of her career riding for GT, and the ever-smiling Swiss racer was an accomplished all-round bike racer. In addition to her numerous XC World Cup wins, she also podiumed at the World Championships and won four European and numerous national titles. Daucourt was also a prominent cyclocross and road racer and took several national ‘cross titles during the ’90s. 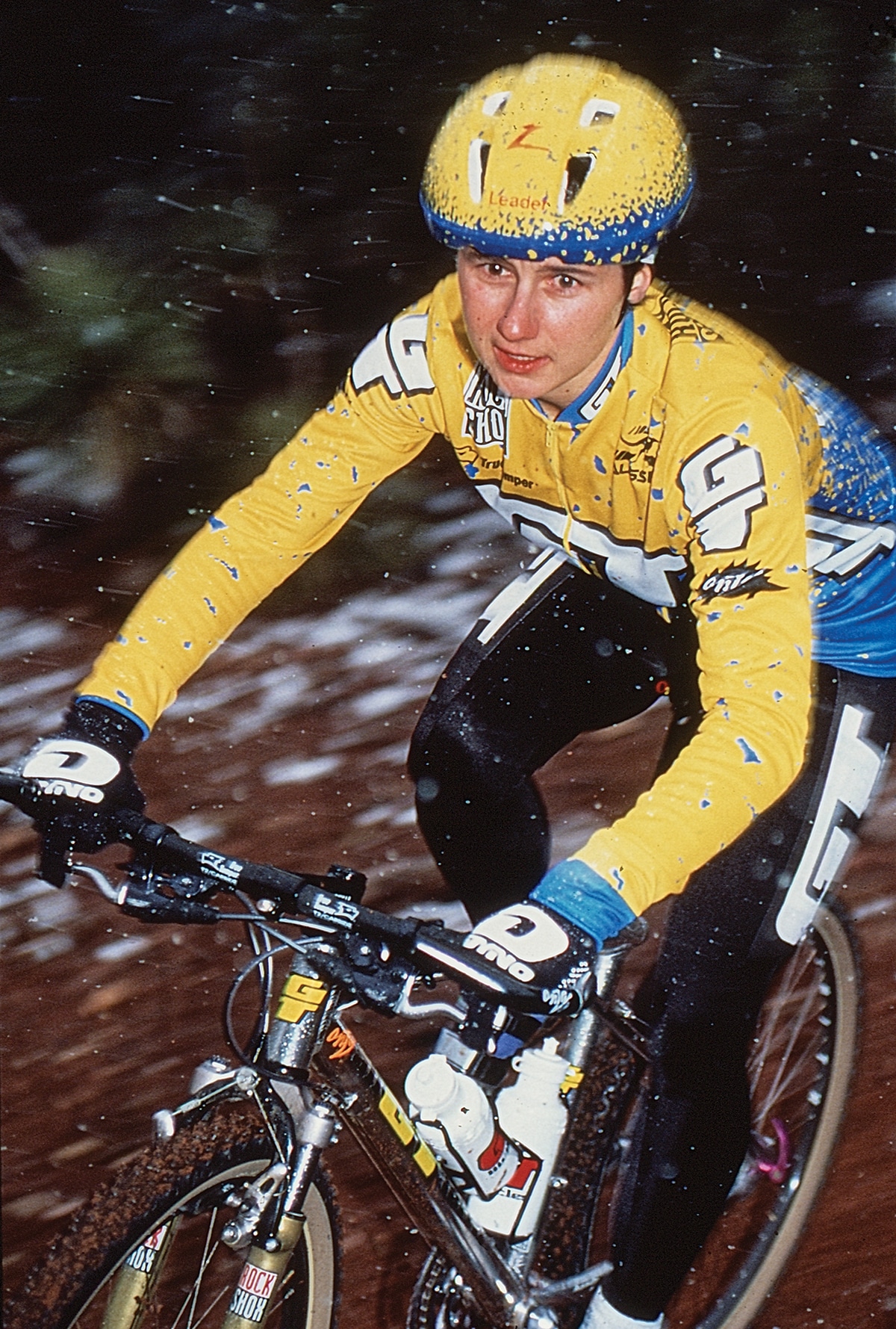 The saga of Gunn-Rita is truly the stuff of mountain bike legend. Born and raised in a small town in western Norway, she studied journalism before trying out mountain biking for the first time in 1995. To say she took to it like a Viking to a longboat would be an understatement. Within months of her first mountain bike ride, she had signed a contract to race with the American Eagle team of Bart Brentjens. She took third place in her first-ever World Cup race, just months after starting out.

Her racing career was to span some 23 years in all with a midway break to have her first child. During her career, she won the 2004 Olympic gold, 10 World Championship titles (four XC and six marathon) and 30 World Cup rounds—a feat unmatched by any female racer in mountain biking history. Gunn-Rita enjoyed a long stint with the Merida team. Her final hurrah came in 2018, her last year of elite racing, when she took an XC World Cup victory in Andorra at the grand old age of 46.