It now appears clear that the idea of running a bigger wheel in the front and a smaller one in the back works very well and is probably here to stay. If that happens, it may be the biggest revolution in bike design since 29-inch wheels entered the market. 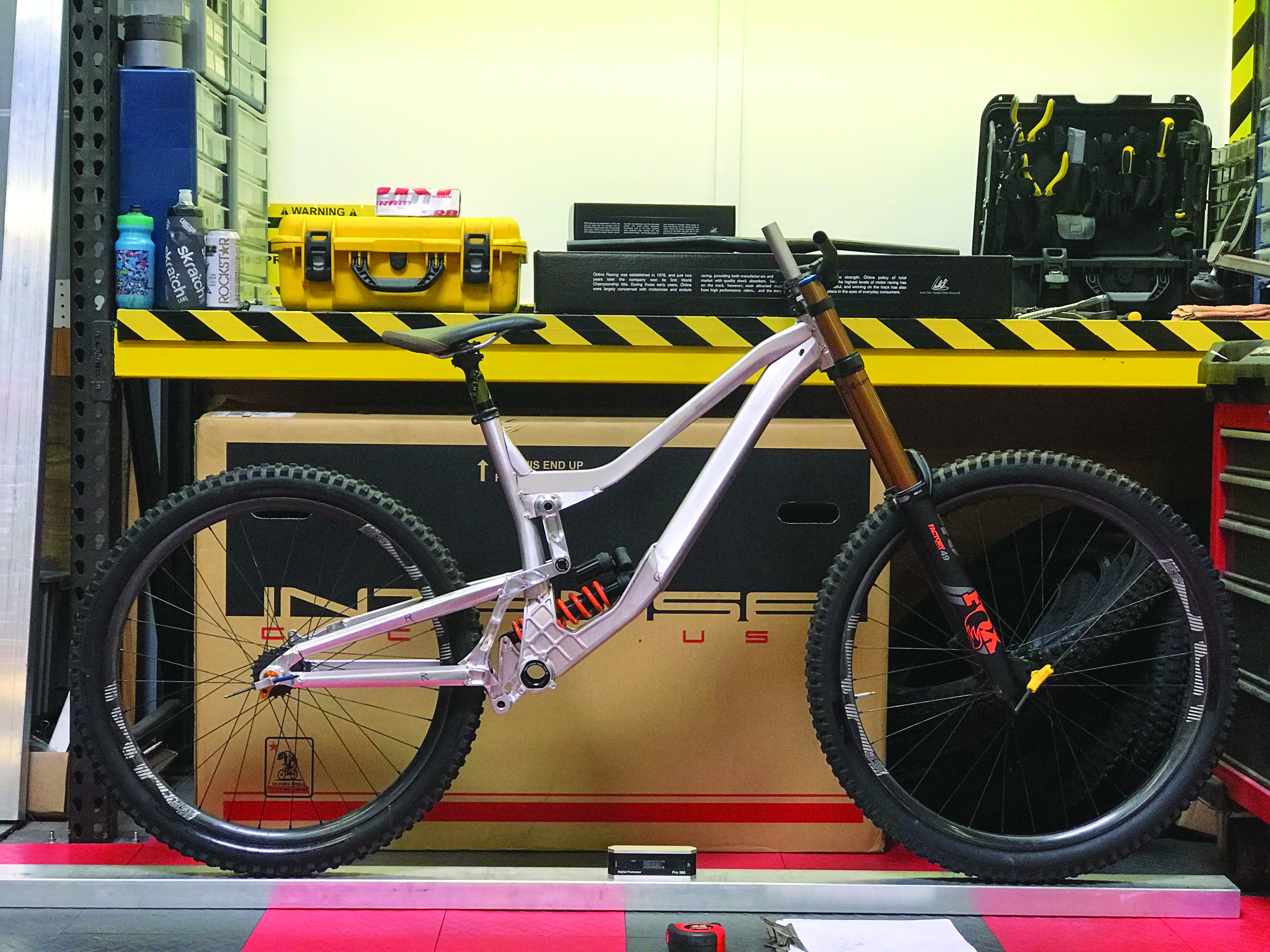 Once the frame was finished, all that was left to do was build it up with the rest of the parts and have Aaron start riding it.

THE PROOF IS IN THE PERFORMANCE

We met up with Aaron Gwin at Fontana recently and photographed him riding his new Intense 279 downhill bike, which was completely designed around the 29/27.5 wheel setup. Gwin wasn’t allowed to let us shoot close-up detail shots of the bike, as it hadn’t been officially revealed yet. Nevertheless, he did tell us that he likes the new mixed-wheel-size bike better than both his 27.5- and his 29-inch race bikes. He had tried the mixed wheel size last year, he told us, and even raced the mixed-wheel setup at the World Championships and the World Cup finals last year. When he raced those races, though, he rode a standard Intense M29 front triangle, which was set up with a custom rear triangle. Last year’s frame had not been redesigned around the mixed-wheel sizes. This year he told us he’s riding a bike that was designed around the mixed-wheel size from the start. 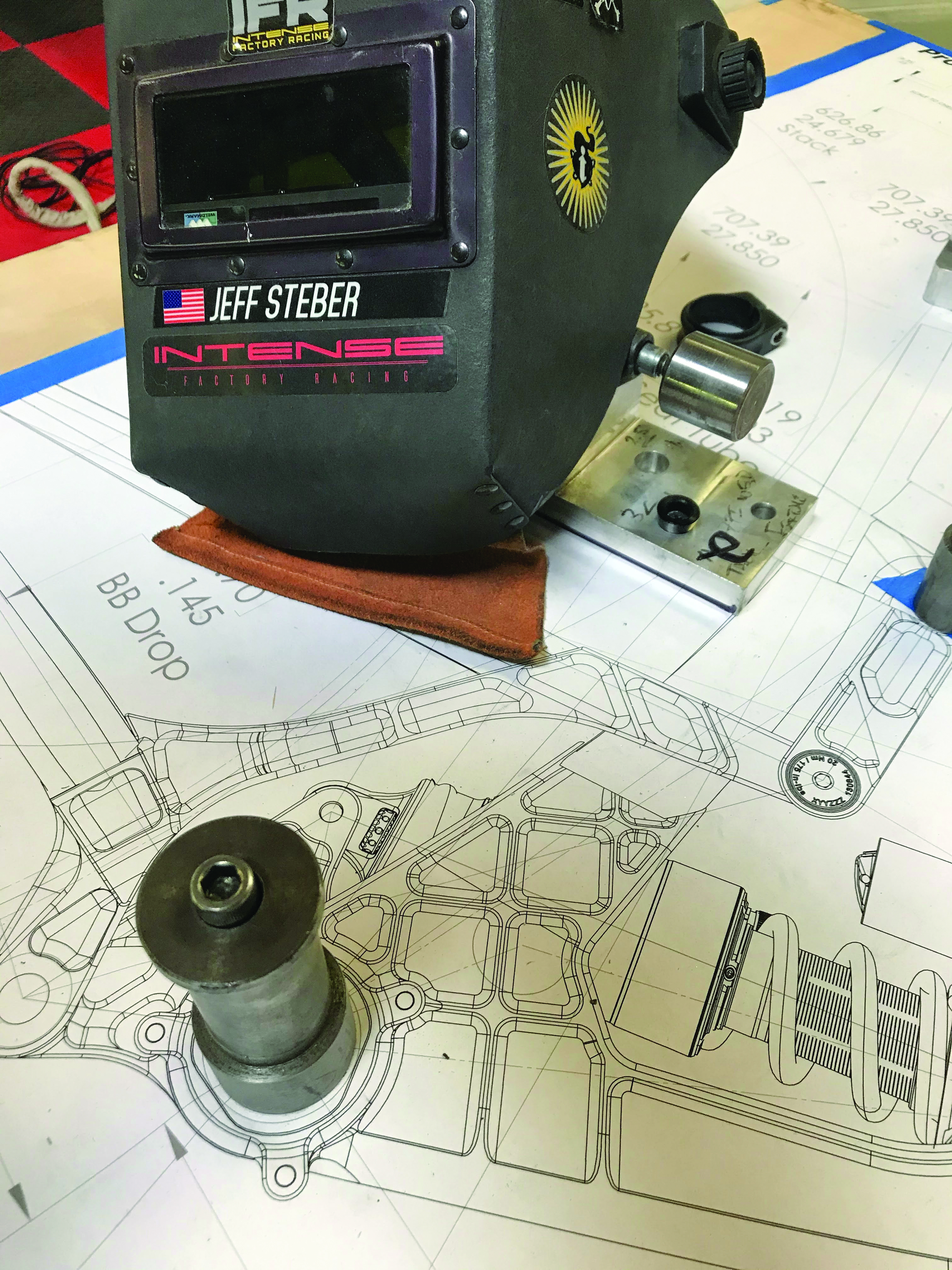 Designing a top-level downhill frame takes more planning and expertise than most people can even imagine.

After talking with Aaron and seeing him ride the new 279 prototype, we had no doubts that the design worked. Afterward, we called on Jeff Steber, the founder of Intense Cycles and the man who designed the bike that Gwin is riding, to get his thoughts on the bike’s design. 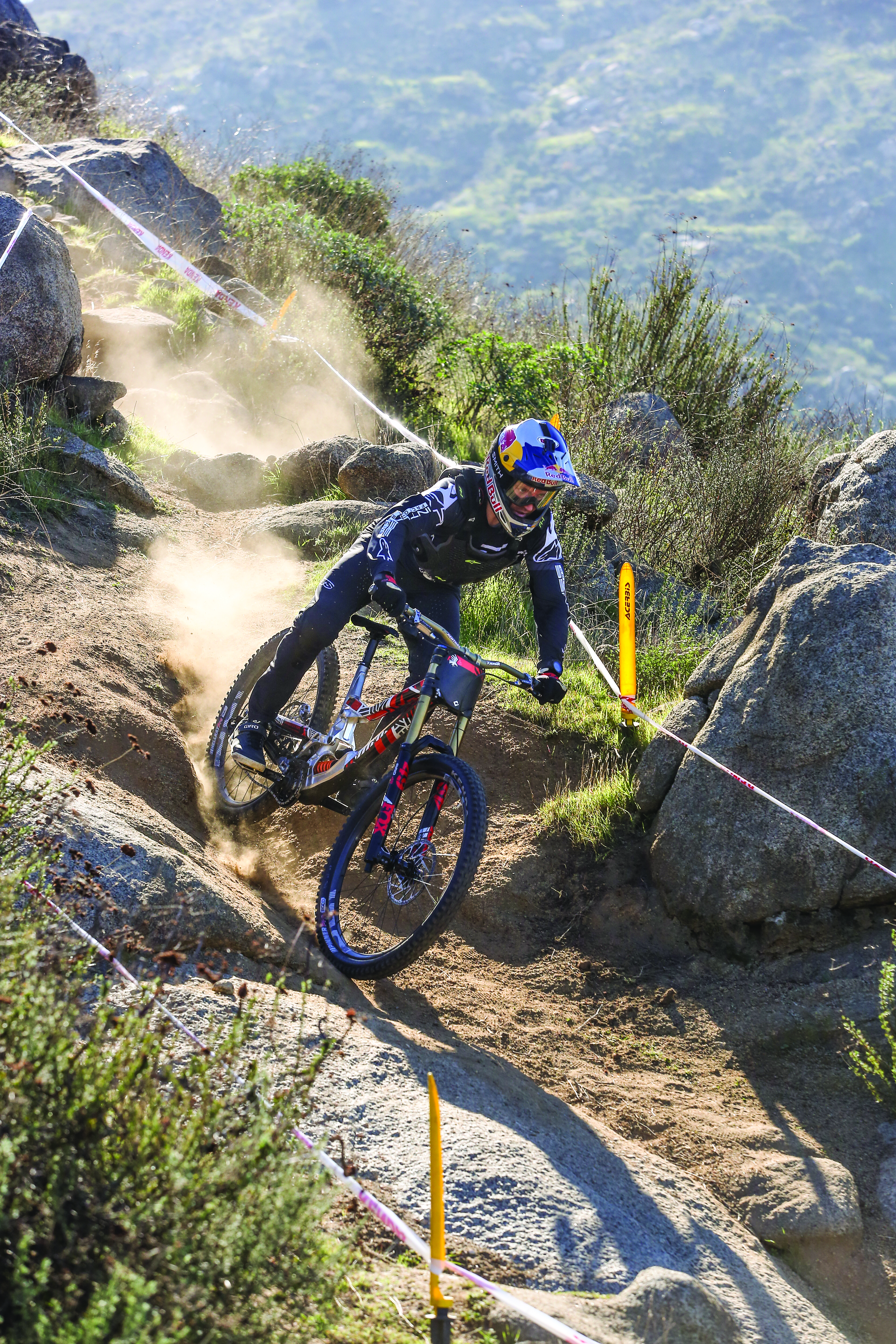 “I like the benefits of the staggered wheel size and feel it works better for me,” Gwin told MBA, “so we’ve got the geometry numbers of the bike dialed in around that. It’s a work in progress, and I’m really happy with where we’re at with the bike right now.”

Steber: One of the advantages of working with Aaron is not only on the racing side but also for product development. He has a keen sense of what works and what doesn’t and can communicate that very well to the R&D team. Many of his sponsors have this same relationship with him.

Steber: Yes, it did. This combination was an instant hit on the Tazer, and that bike became a favorite training tool for team riders. Aaron adopted it into his program right off the bat for self-shuttling and spin days, etc., and realized how well the staggered wheels worked. This led to some early prototypes, based off the M29 last season, running staggered. 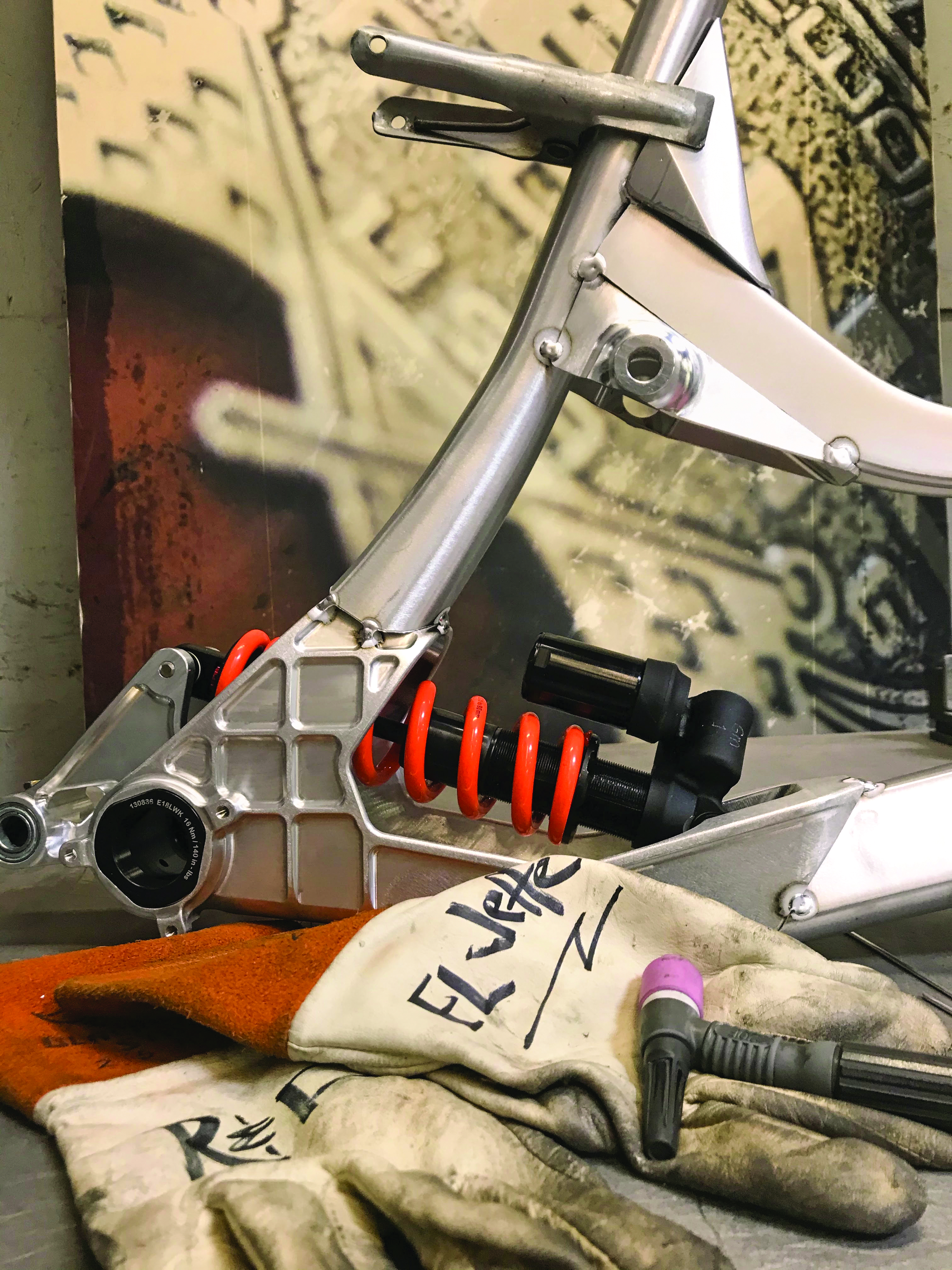 MBA: Aaron rode a custom 29/27.5 downhill bike at both the UCI World Championships and the World Cup Finals last year. How was that bike different from the new one he’s riding now?

MBA: Did Aaron’s evaluation of the bike’s performance help you make adjustments to the initial frame design?

Steber: The modified M29 279 bike gave us a lot of data for what would become the current alloy proto 279. We also changed the sizing, geometry and kinematics to accommodate Aaron’s riding style, at the same time adjusting the kinematics to work better with the Fox RAD (Race Application Development) prototype rear shock we were testing. The bike has become a testbed for several other key components: suspension, brakes, tires, etc. In reality, everything on the bike. 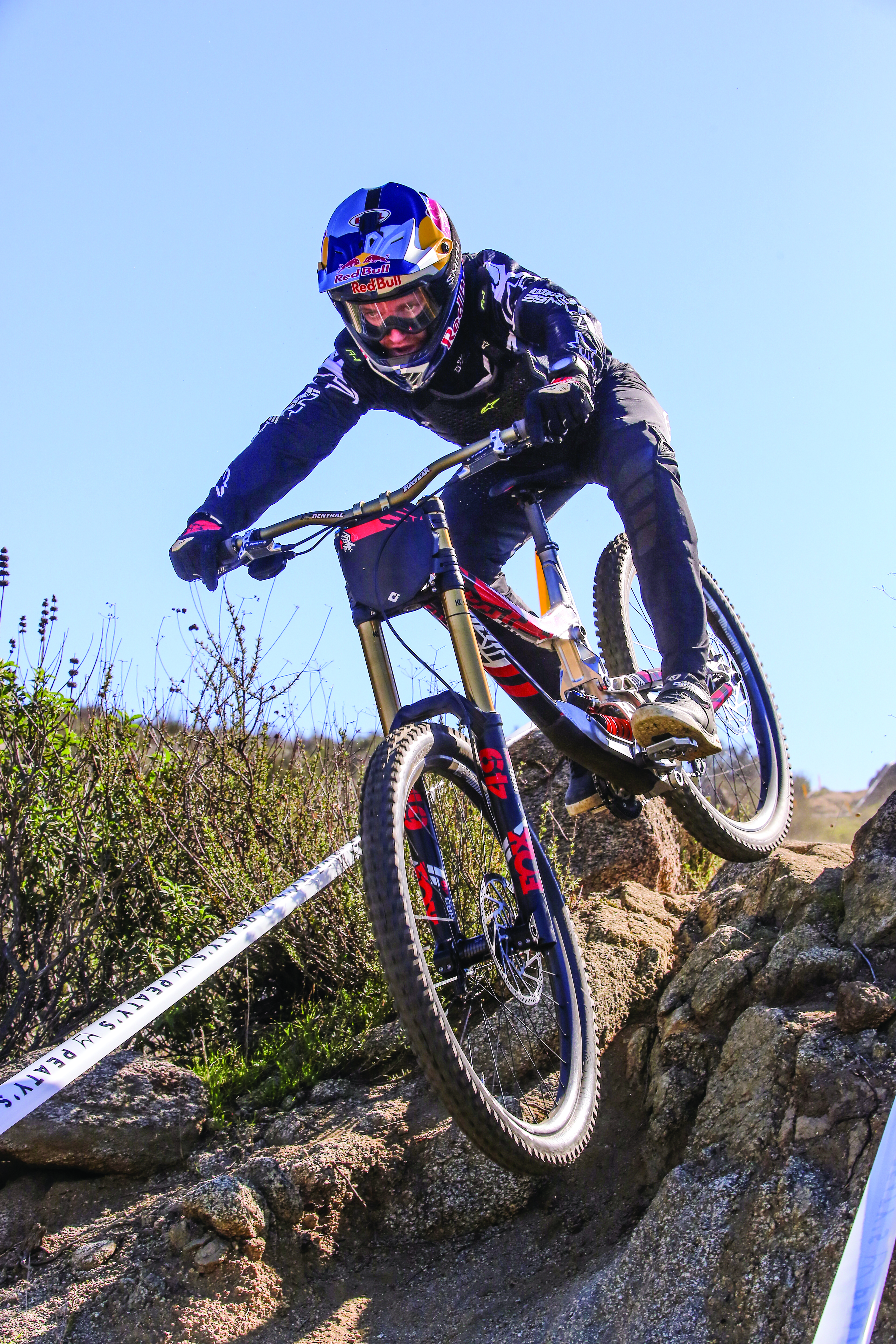 Aaron Gwin getting familiar with his new Intense downhill bike.

MBA: How many 29/27.5-inch downhill prototypes have you made so far?

Steber: This would be #2 on the DH frames so far. The plan will be for Aaron to race the alloy protos through the World Cup season and evolve as needed. This is always a bit risky for a top racer, but Aaron is up for the task.

John Hall, Aaron’s head mechanic, is also up for the job and has been a key member of the project from day one, working very closely with a focused R&D team that consists of myself, Chris Knutson, Aaron Gwin and John Hall.

MBA: What are the advantages of the 29/27.5-inch wheel combination?

Steber: It seems to be the best of both worlds with improved handling, good rollover, being able to manage optimum geometry (chainstay lengths), weight bias, etc.

MBA: Are there any disadvantages?

Steber: Not seeing any disadvantages yet.

MBA: How well has your Intense Primer S—with the mixed-wheel-size “279” designation on the frame—been received by the public?

Steber: The Primer 279 has done well, as it is something new and people are curious. The nice thing is that you can always throw a 29-inch rear-wheel setup in there.

MBA: Can you give us an idea how soon an Intense 279 downhill bike with the mixed-wheel sizes might go on the market? 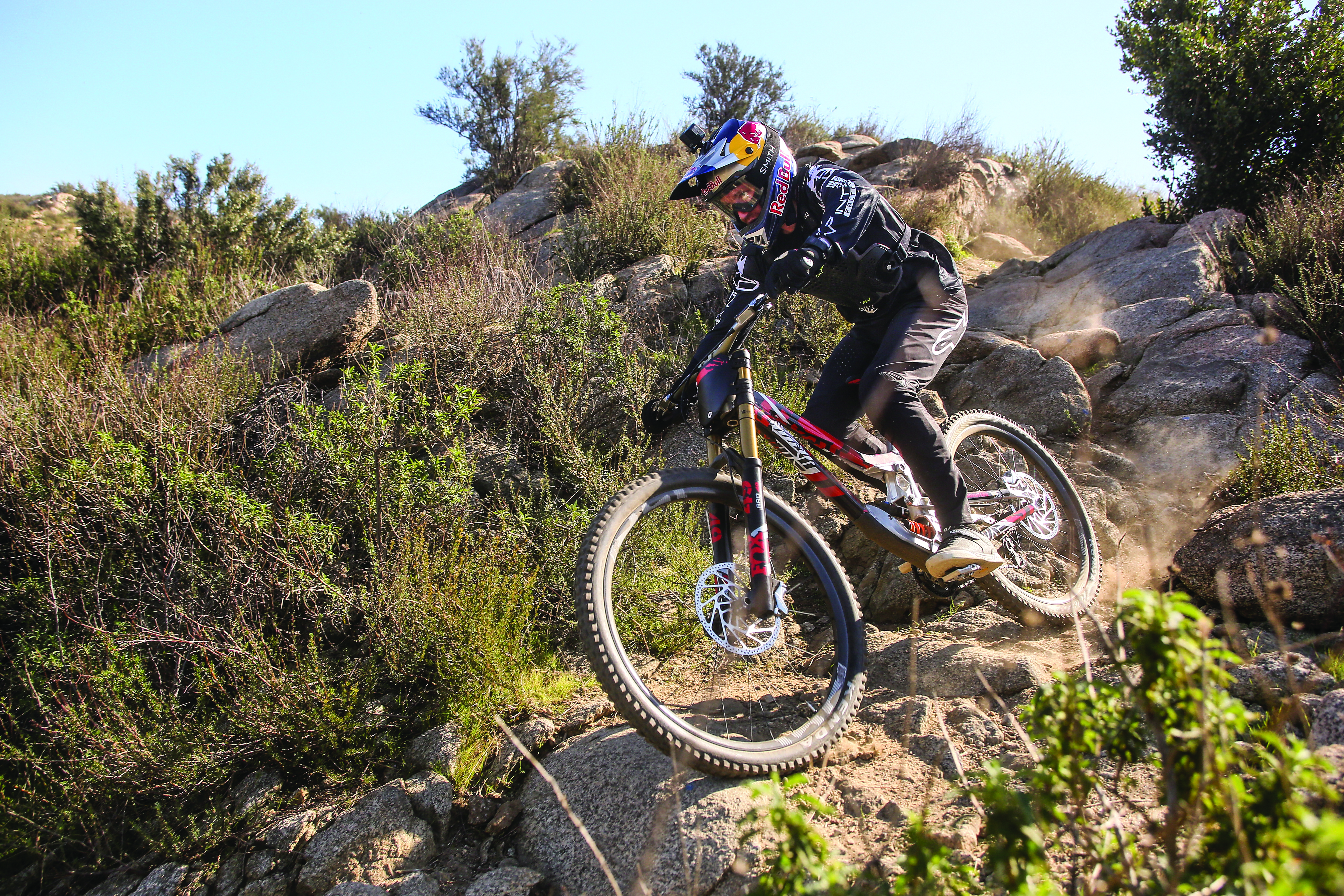 Gwin took his new, 29-/27.5-inch prototype out for a day of practice runs on Fontana’s pro downhill course, while MBA shot photos of the action. “The new bike is basically just the latest version of what we were working on at the end of last year,” said Gwin. “I’m in between the stock L and XL sizes of the M29, so we adjusted the geometry some on this new bike to fit my size and preferences.”

Steber: This is just a prototyping process. There are no plans for a production bike yet. This bike is alloy, and with a lot of time spent on efficiency, the design of the alloy parts has turned out only 8 ounces heavier than the full carbon. There could be an alloy DH bike in the future.

MBA: Does Intense have any other “staggered” 279 bike models coming out in the months ahead?

Steber: Yes, definitely. There will be two segments that offer a 279 variant.

MBA: Do you think mixed-wheel mountain bikes will ever come to be the industry standard as they are in motocross bikes?

Steber: I think that question will be answered over the next year. They have already proven to be great performers in downhill and enduro segments and especially for racing.

Dream Descent in the Italian Dolomites with Richie Schley