INNSBRUCK, AUSTRIA, June 18, 2022 — “Honestly, I don’t even know how to put words into today,” a chuffed Emil said of his score of 98 in the Crankworx Innsbruck Slopestyle, rumored to be the highest Slopestyle score in history. “It’s been ever since Big White back in 2019, every FMB contest I went to, I stood on top of a podium which at this time around is 9 events or something. To be able to secure 7 diamond events in a row, I’m very humble against the position I’m in. It’s nothing I can take for granted, and I work on defending it for every single event.” 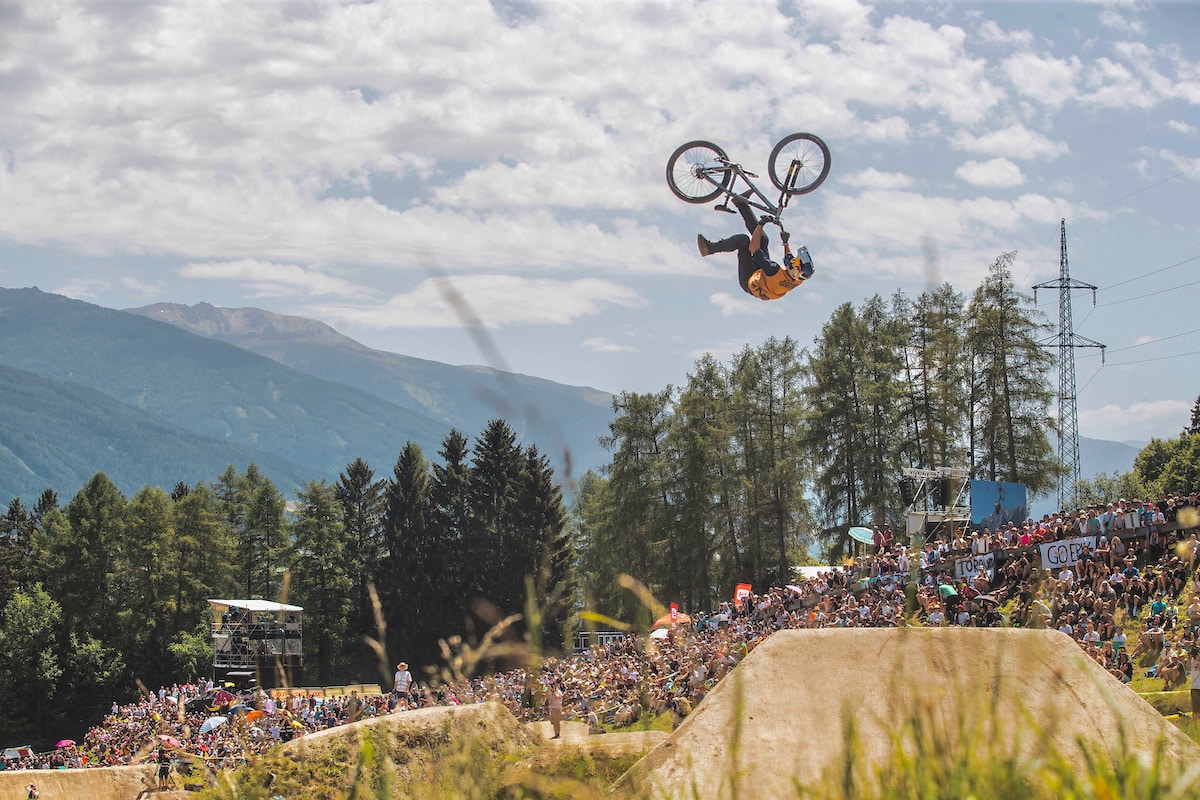 There were reportedly 8000 fans on hand to watch the event go down. Photo by Florian Breitenberger

The Swedish slopestyle rider’s defining moment went down in the first run of the day. Stacking up against the 14 of the world’s best slopestyle mountain bikers, Emil claims he is stoked on the whole package rather than specific tricks. “Even though I have technical tricks, I always try to view the run as a top to bottom piece so I don’t have the fourteens, I don’t have the twisters, I don’t have the big spin combos, but I’m doing a lot of tricks back to back and that’s what ties the package together for me.” 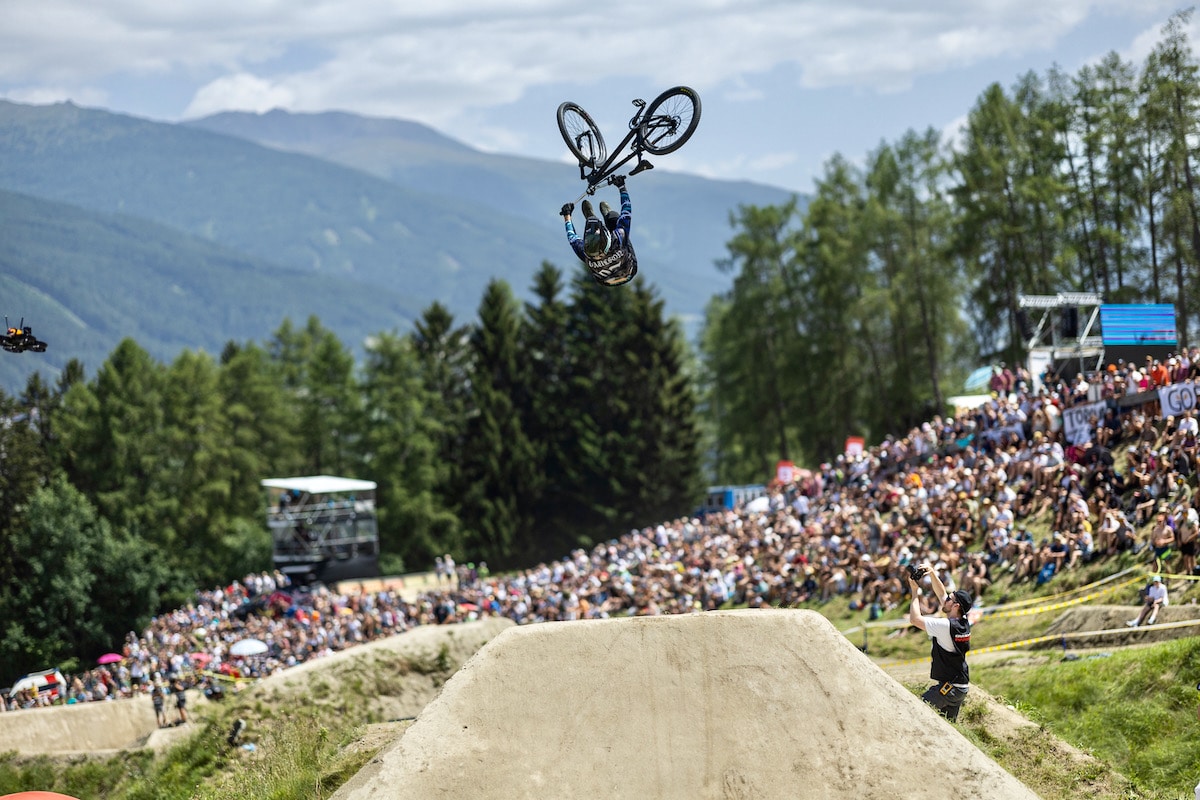 Backflip variations were a big part of the competition. Photo by Clint Trahan

Fellow Red Bull rider, Erik Fedko put down his best performance to date taking home the silver medal today with a final score of 95.25. Fedko stomped his first run with the unique style that the German is known and celebrated for, and a particularly pencil-straight superman seat grab which had the crowd of 8000+ going wild.

“It feels really good. I have always been in the 92 max, so 95 is really good,” said Fedko. “I was about to step it up in the second run, but then I couldn’t do it because of the wind and not enough speed, but you can’t always win, you know. Next time, I have to work harder, and we will see. I am super stoked for Emil, he did a great run as always stepping up the game. It’s insane.” 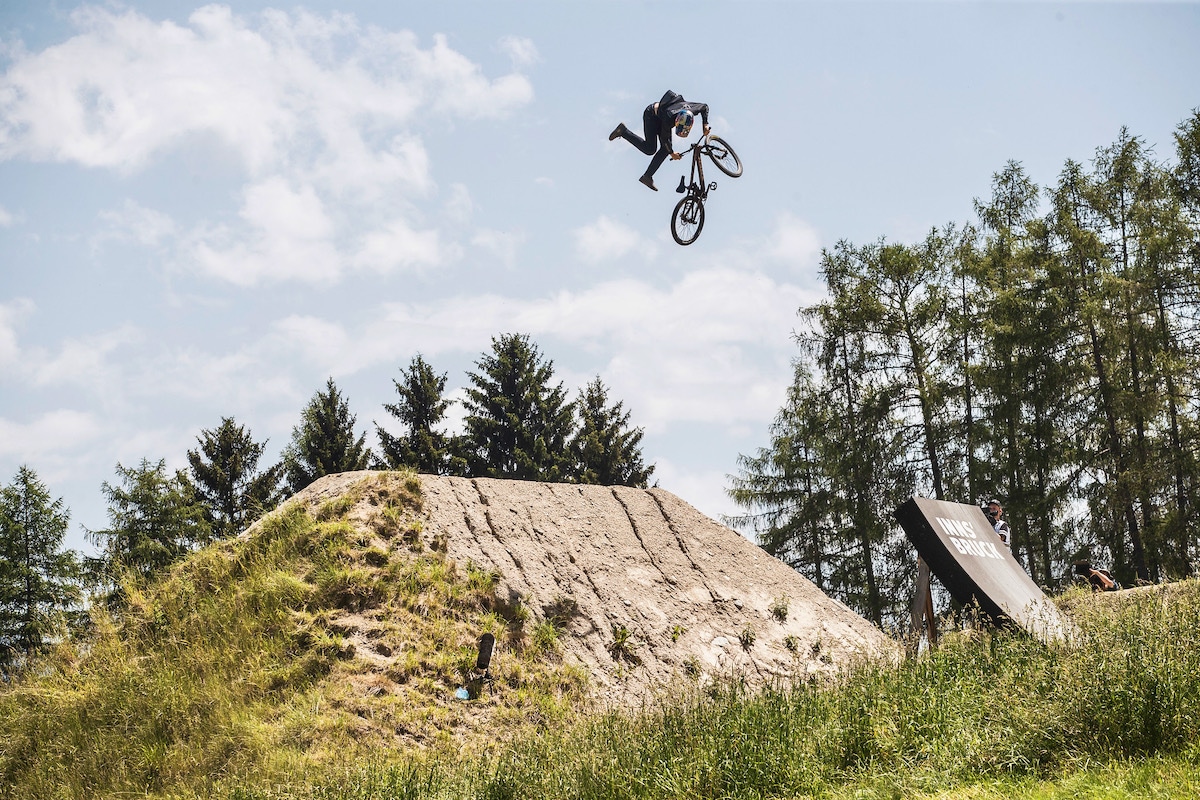 “It’s what I put my heart and soul into, so to see the hard work pay off, it’s more like a relief than a surprise, you know?” added Johansson. “I used to cry a lot on the podiums, now I’ve just been in disbelief in the past year or so. I don’t even have any words to put into this. I am speechless, I guess.”

Bronze medal winner today is the 2019 Red Bull Rookie of the Year, Timothé Bringer, earning his second Slopestyle podium place with a final score of 93.75. 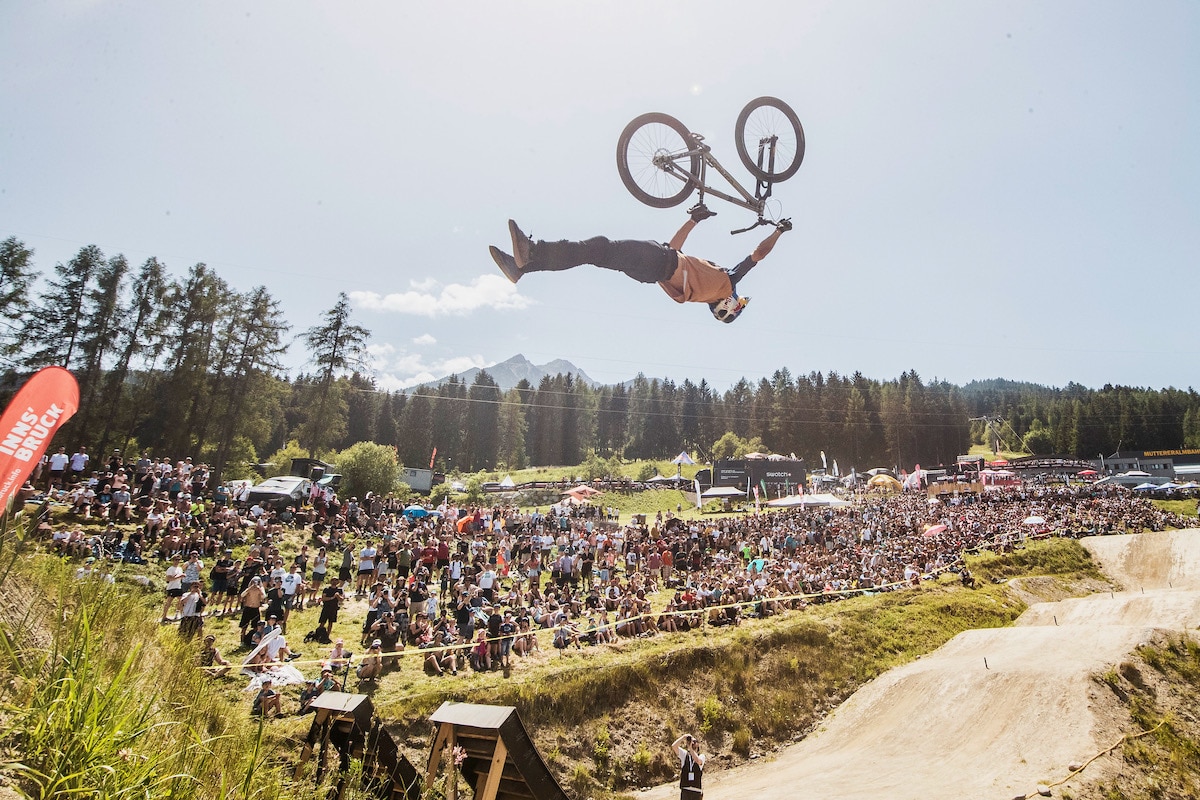 “The scariest trick was maybe that double backflip on the step-down,” said the Frenchman known as The Hulk. “I did it only one time before today at practice so that was the scariest for me. Or maybe the sickest, I don’t know. I’m happy I didn’t crash on this one because I would die.” A combination of scary and sick is an accurate way to describe a double backflip off the step-down, which is approximately 73 cans of Red Bull tall, if anyone is curious.

An extremely close fourth place came from Dawid Godziek who was in for redemption after a crash on his first run. He showed no mercy with a clean top to bottom run featuring A front-flip bar spin to tuck no-hander, a backflip tail whip off the whale tail, and then a superman seat grab on the final jump before the quarter pipe. Godziek was clearly stoked after his second run, having stomped all his tricks with near precision and coming out with a score of 90.25 and the fourth place. 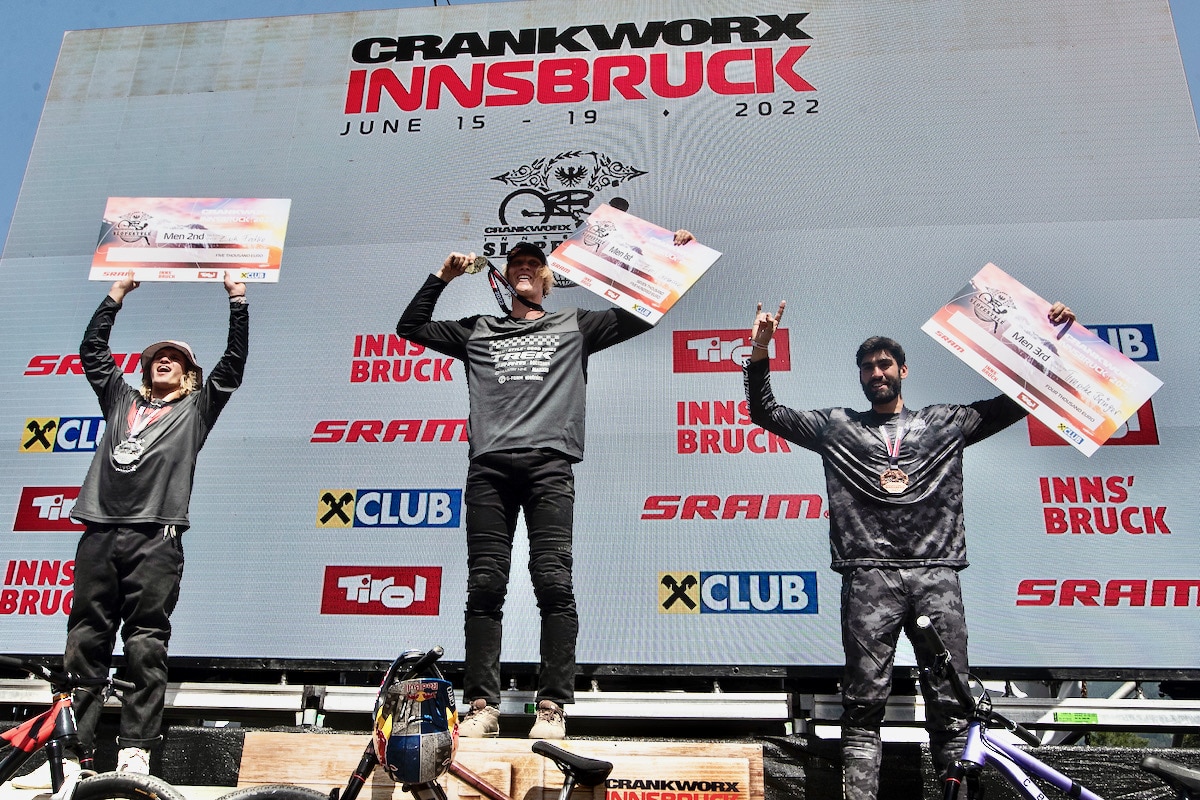 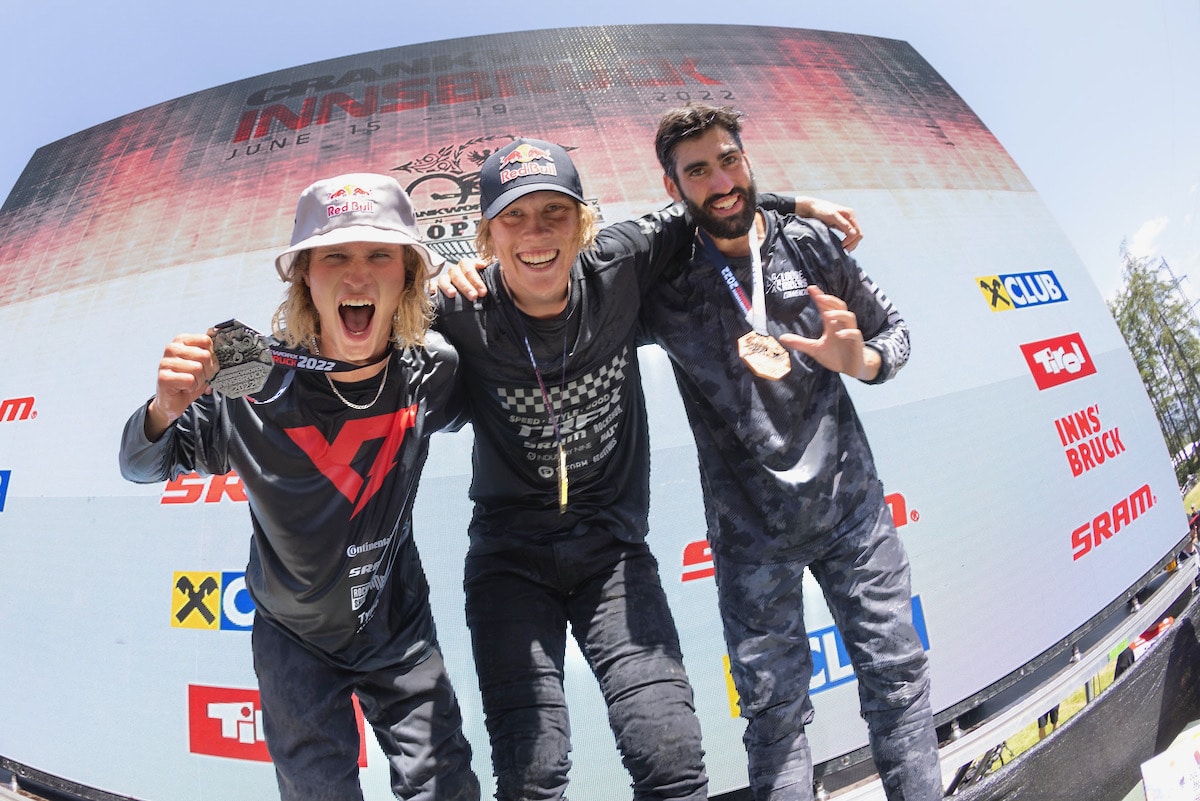 This was a season opener for the books today, and the return of Slopestyle fan madness marks a new chapter that the riders couldn’t be more stoked to have back.

“It makes everything. I miss this, it’s what I came into the scene with. To have this, it feels like home again and it’s quite crazy because it’s been so quiet otherwise,” said the 22-year-old Swede of having the crowds back. “I can’t wait for the rest of the season. There’s plenty more events with Australia and especially Whistler. Even though Australia is going to be interesting, I am looking forward to Whistler because I know what’s there and I can’t wait.” 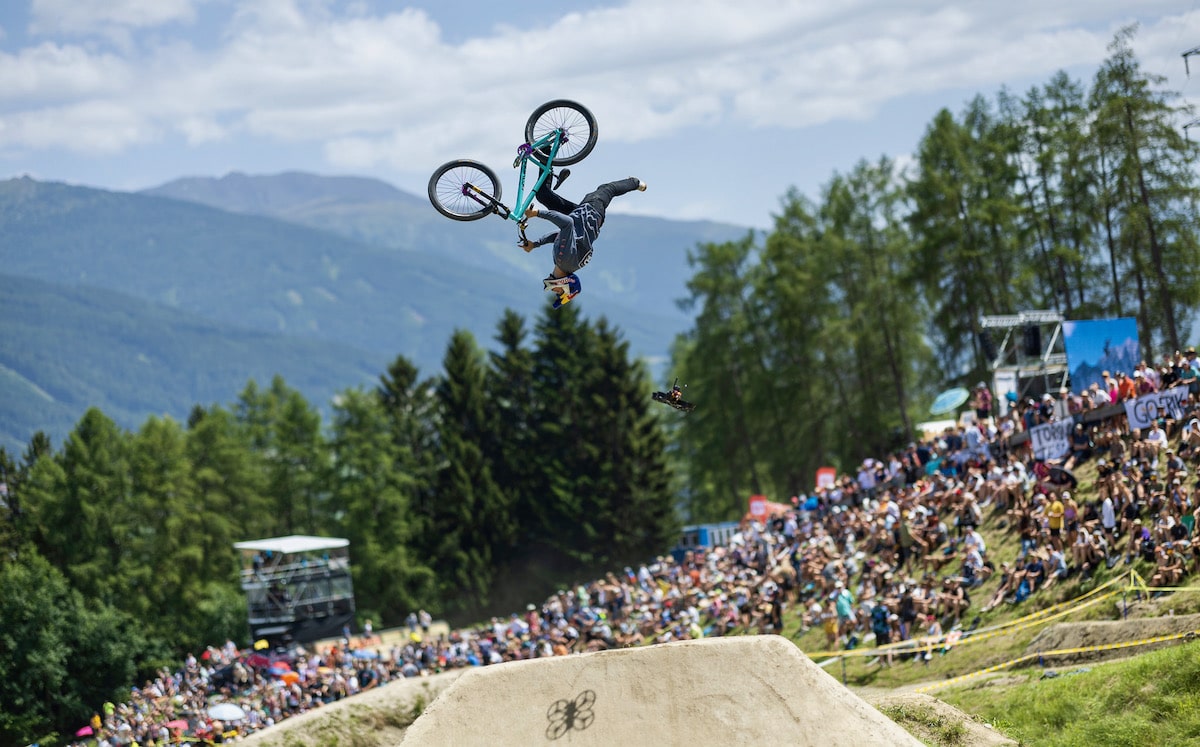 “Feels so good, my girlfriend and all my friends are here. Having a big banner there with ‘Go Erik’ so they got me really hyped. A lot of friends live here also and volunteer at Crankworx, so it just feels nice, all my sponsors are here. Lots of support and that felt really good. I’m stoked!” said the silver-medalist.

“We finally have some crowd in Innsbruck so that’s sick. The crowd was screaming a lot and that’s way better for us when we need to send it. I’m stoked that they are here, and I can’t wait for the next one.” Well, that settles it Crankworx fans, the world’s best riders need us there!” said the bronze-medalist.

Today marked the beginning of the Crankworx FMBA Slopestyle World Championship (SWC) season for 2022. Next, the action rolls on to Whistler. Red Bull Joyride will be celebrating its 10th anniversary at Crankworx Whistler this August, and is sure to be a next-level celebration of Slopestyle greatness. 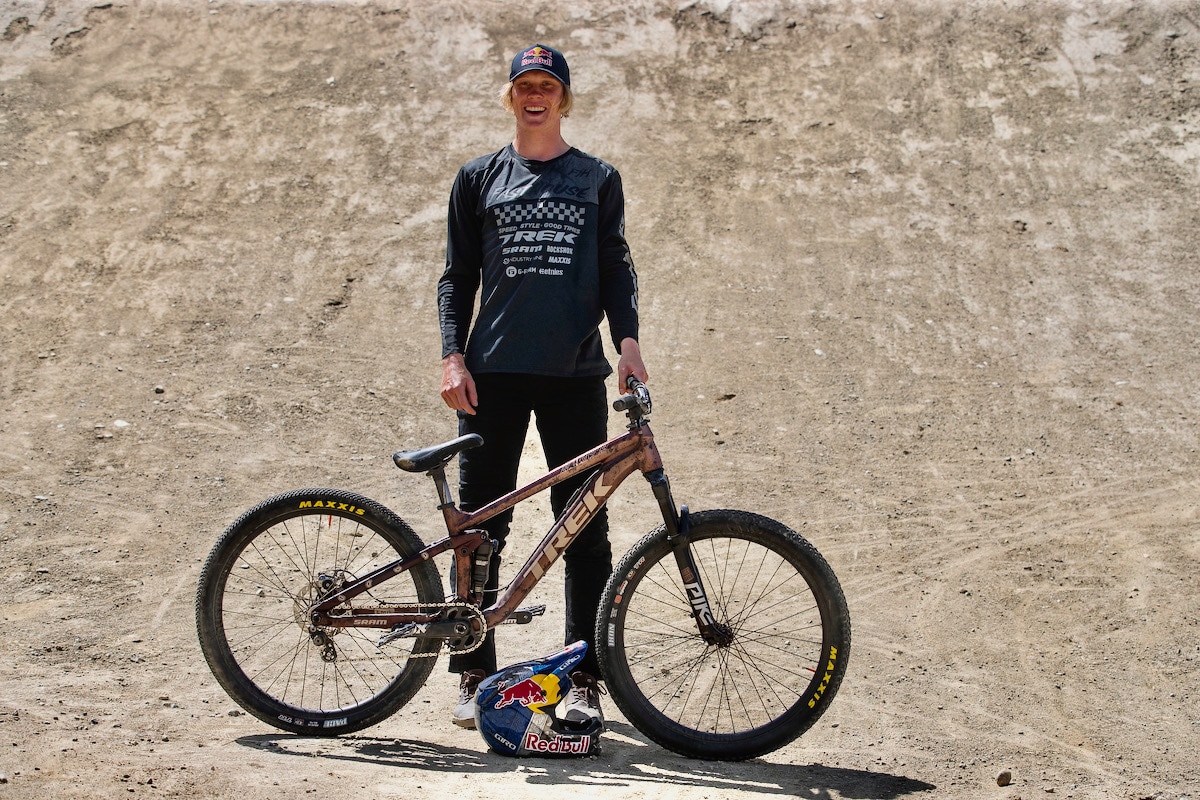 You can catch all the action of the day on replay on Red Bull TV.

On Sunday, Crankworx Innsbruck will wrap with The Deuter Downhill Innsbruck presented by Raffeisen Club which will be live on Red Bull TV.

HÖLL AND HATTON TAKE THE GOLD IN INNSBRUCK DOWNHILL