The Giant Reign has long been known for being a plush, long-travel machine built for conquering climbs and obliterating descents. The Reign quickly became the bike of choice for the most hard-core trail riders, later shifting its attention towards enduro racers as the format began to grow. The goal for the all-new 2018 Reign remains the same. With the help of new technologies and input from Giant’s Factory Off-Road team, the new Reign looks to dominate at local enduro races and give trail riders the utmost confidence when barreling down the mountains. Our test riders were amped to swing a leg over this new yet familiar bike to see if Giant’s pioneer enduro machine could reign over the competition. 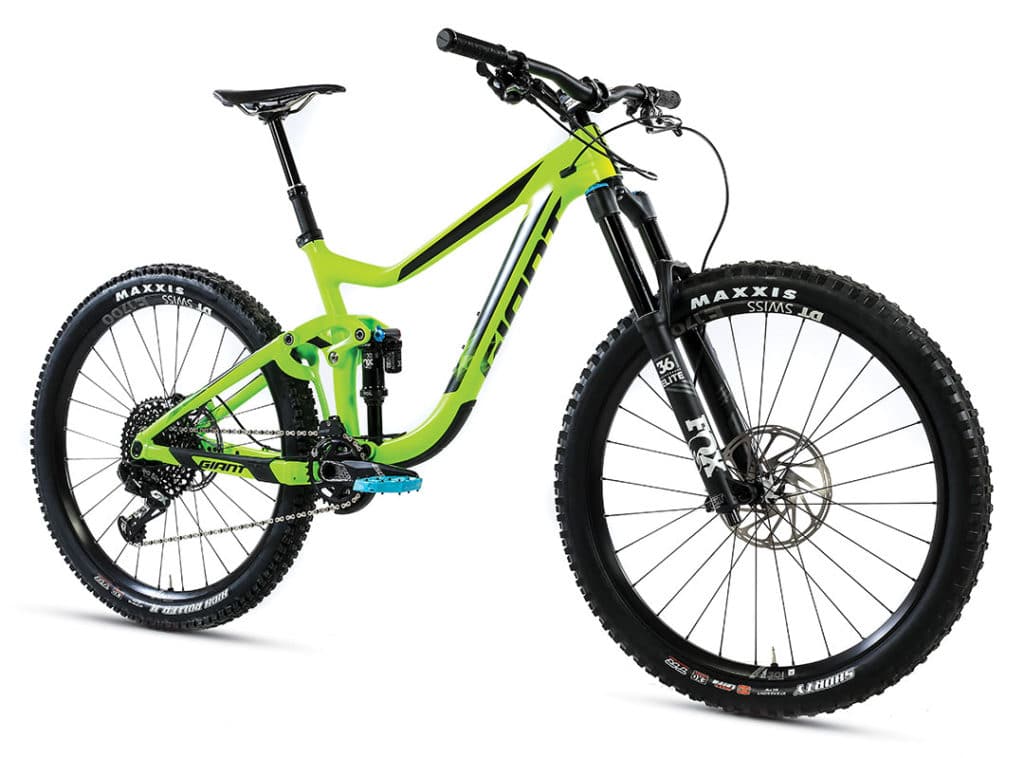 While the all-new Reign may have been designed for Giant’s factory enduro racers, this isn’t purely a race machine. Sure, the Reign requires a lot of speed to extract the full benefits of its design, but skilled non-racers will find the Reign is just as fun off the clock. The only thing the Reign demands from its rider is that he hangs on tight and lets this wild machine take care of the rest. 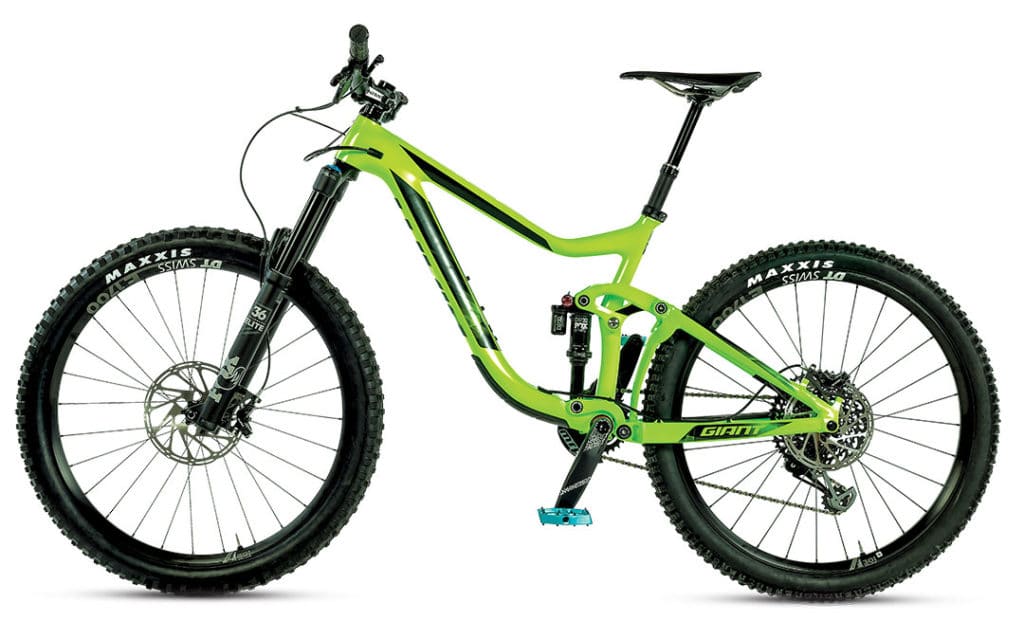 The Reign Advanced 1 we tested here featured a composite mainframe with an aluminum swingarm. This new bike received updated geometry with a slightly longer cockpit over the previous model and a reworked suspension design. The Reign still uses Giant’s Maestro suspension system, first launched in 2004, but features a new trunnion-mounted shock and a new carbon upper rocker arm, which was added to increase frame stiffness and suspension performance. The Reign sports 160 millimeters of travel and flaunts aggressive geometry numbers. Our test bike had a 65-degree head tube angle, a 25-inch-long top tube (size medium) and 17.1-inch chainstays. The Reign also has wellthought-out internal routing, giving the bike a streamlined finish. 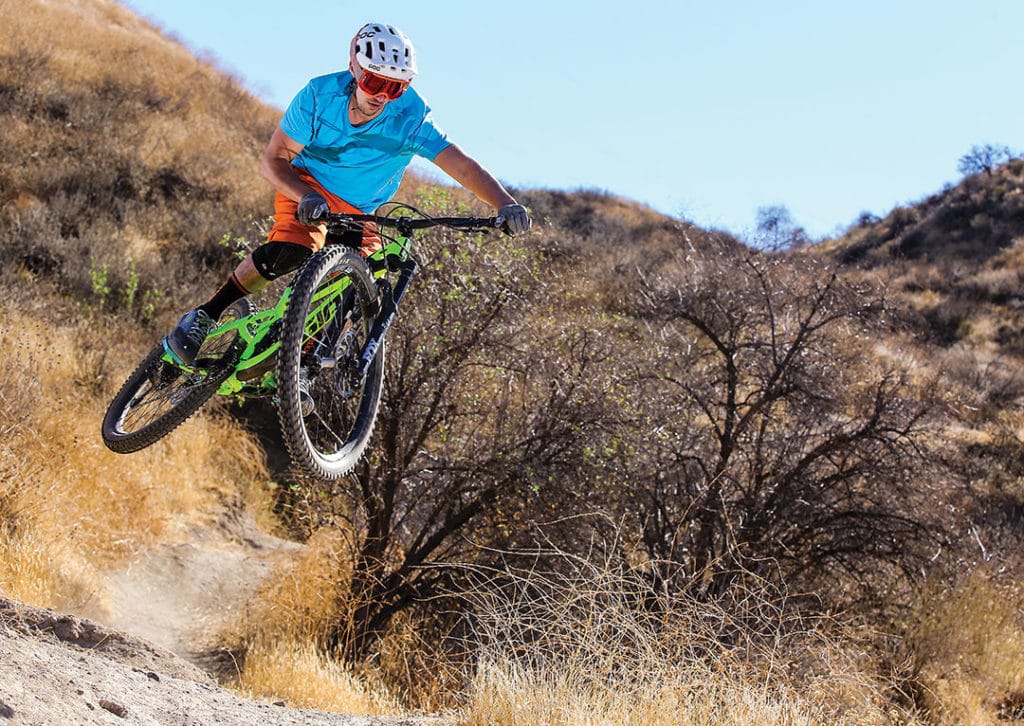 The Reign is available in five models—two with aluminum frames and three with carbon frames—ranging in price from $2700 to $8200. Our Reign, with a price of $5400, came ready to rip with high-performance, mid-level components. The most standout features of our bike were the Performance Series Fox suspension and SRAM Eagle drivetrain, both offering great performance at a reasonable price point. Additional standout components included the MRP chainguide, which kept our chain in place and protected our front chainring from rocks and roots; Giant’s own handlebar, which has a width of 800 millimeters; and Giant’s own dropper post with 125 millimeters of travel and an underthe-bar remote. 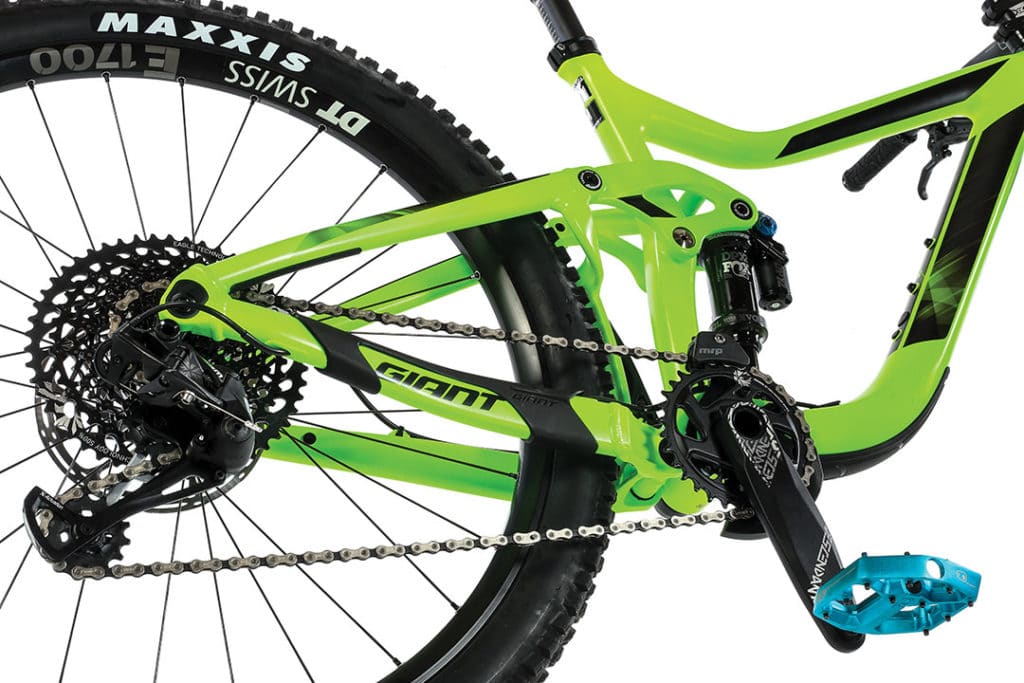 Setting sag: The Reign likes to go fast, and to do so, its suspension needs to be tuned properly. Don’t let that intimidate you, though, as Fox offers a great set of tuning guides at www.ridefox.com . We followed the instructions for our 36 Performance Elite fork and ended up with 20-percent sag and a base tune for our rebound. We then followed the recommended settings for our low- and high-speed compression knobs. Out back, we followed the guide for the DPX2 shock, which recommended we pump up the psi in our shock to match our body weight and cycle it 10 times through its travel to balance out the positive and negative air chambers. We then set the shock to 30-percent sag and adjusted our rebound accordingly. 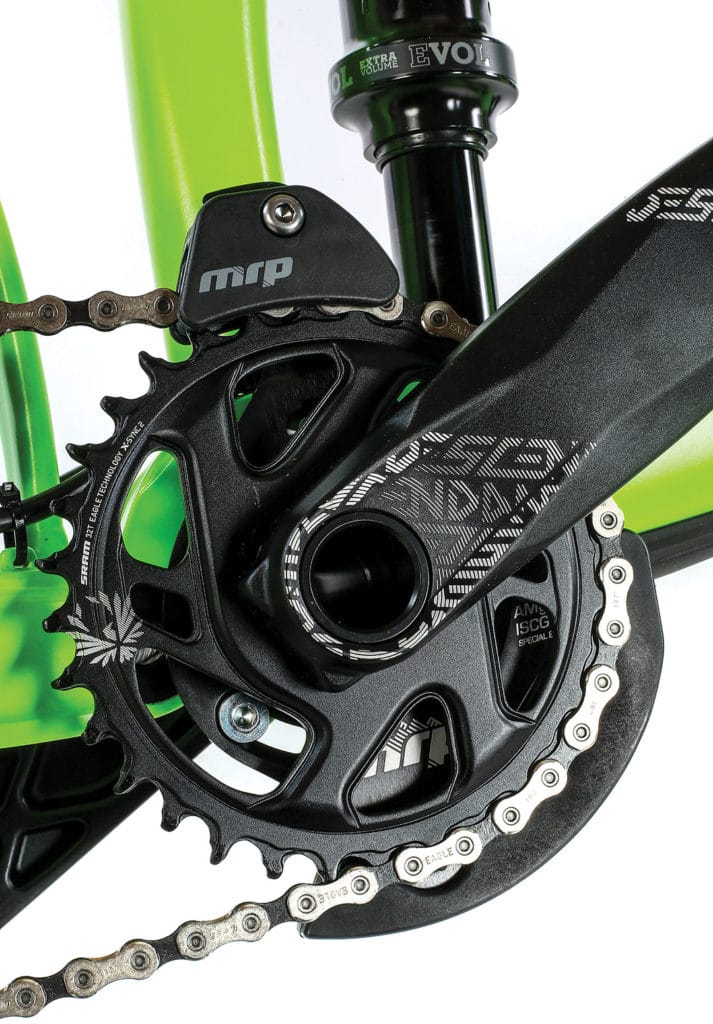 Moving out: The all-new Reign has a roomy top tube that allowed us to comfortably run a stem as short as 40 millimeters. This short stem combined with wide, 800-millimeter handlebars gave our testers quick and snappy handling, while the long top tube and slack head angle provided stability. Our SRAM Eagle drivetrain gave us a large gear range, perfect for tackling steep climbs or blasting fast descents. After a few mid-ride tweaks to the suspension, our bike felt dialed and ready to take on any trail. 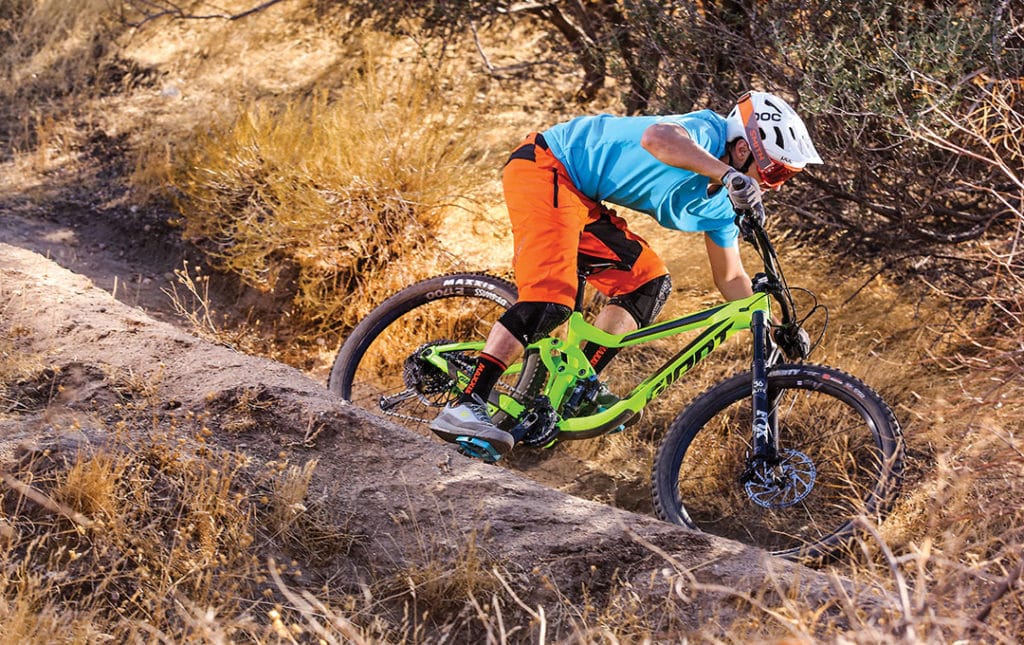 Climbing: The Reign’s plush suspension worked in its favor during the climbs, maintaining traction while providing a supportive pedaling platform that didn’t bob or bounce while powering up the trails. The slack head angle and short stem, on the other hand, caused our front end to wander a bit during steep, slow climbs, but testers found placing more weight over the front end helped resolve this issue. Overall, the Reign is made for the rider who isn’t afraid to work a little harder on the climbs so he can be rewarded heavily on the descents.

Cornering: Modern enduro bikes have wider tires, stiffer frames and even more active suspension, which has resulted in bikes that can shred corners harder than ever before. The Reign is no exception. Our test riders found themselves confidently sliding this bike around turns and railing berms. The 2.5-inch Maxxis Shorty tire up front wasn’t a perfect match for our loose and dusty local trails, but with tire pressures as low as 23 psi, we managed to get the Shorty to hook up. The Reign could use a slightly longer dropper post to give riders more clearance above the bike, but, other than that, we were more than pleased with the Reign’s ability to tackle the twists and turns of our favorite trails. 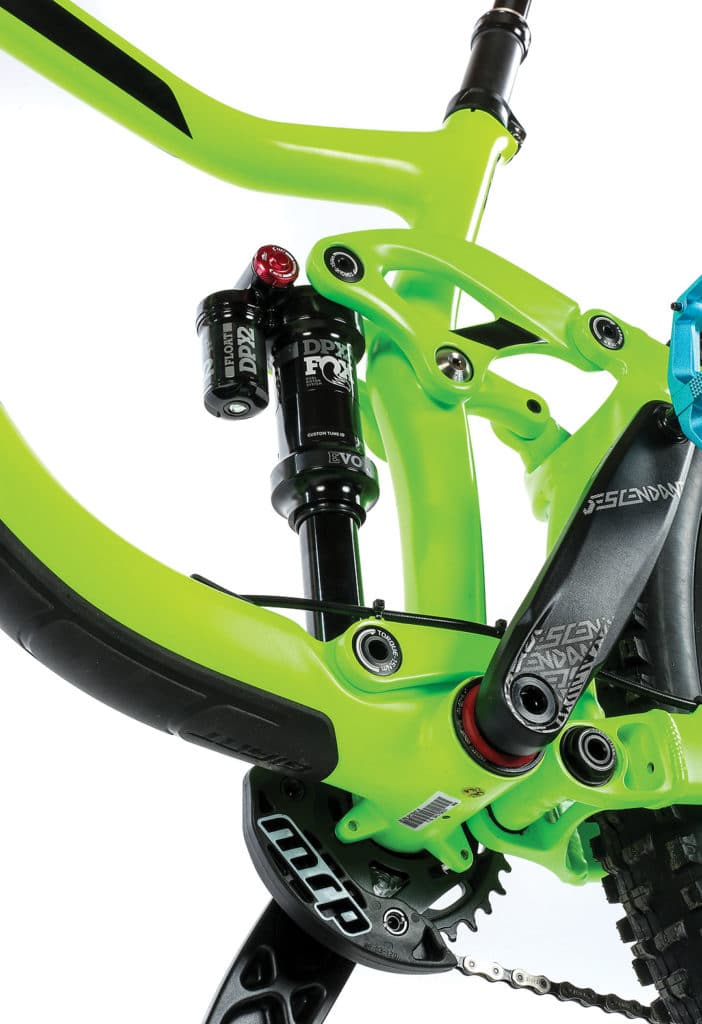 Descending: The Reign prides itself on its descending  prowess, and while it has been known as a capable descender in the past, this new version is the most capable Reign to date. The updated geometry, reworked suspension design and modern components make the Reign an excellent descender, turning the gnarliest terrain into a fun flow trail. Many trail riders will likely  get along better with Giant’s shorter-travel trailbike, the Trance, due to the Reign’s overly aggressive styling, but if you’re a rider who truly wants to push the limits of speed, then the Reign is a great tool for the job. 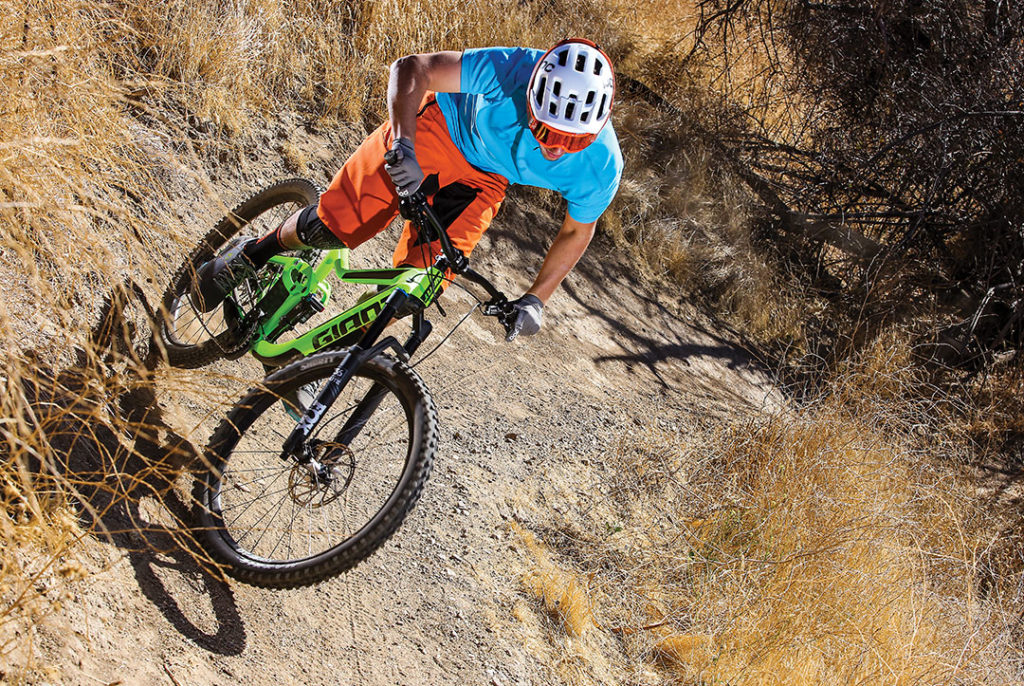 The Reign Advanced 1 offers a nice balance between performance and value, but a few upgrades could further improve this awesome machine. First of all, we swapped out the Reign’s inner tubes for the included tubeless valves and tire sealant. We then folded up these tubes so that we could easily carry one as a spare. Taller riders may feel the need to get a longer dropper post to have maximum mobility over their bikes. For our local trails, we would recommend swapping the front tire, but riders who live in areas that get wet and muddy may find this tire suits their trails well. And last, we strongly advise you head to Fox’s website for tuning tips. Their guides will provide you with air-pressure charts and give you a base setting for rebound and compression adjustments. 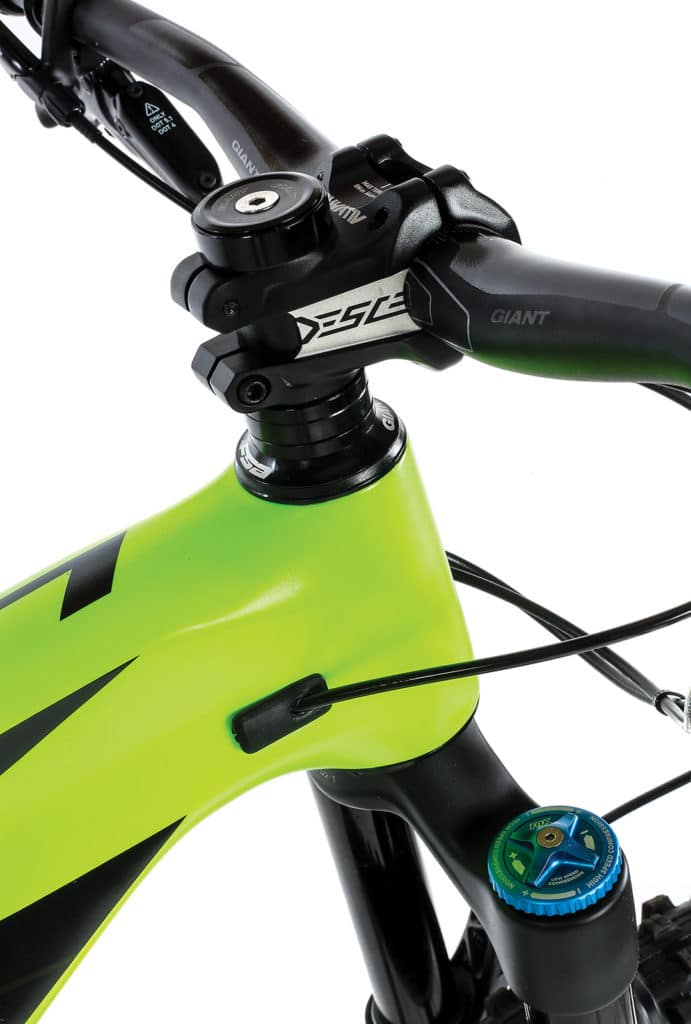 Enduro bikes have become popular among racers and trail riders who want a bike that can climb well and descend even better. The Reign is just that bike. It’s not going to effortlessly climb to the top of the mountain like a shorter-travel trail or cross-country bike, but it does make sure to pack a serious punch for the way back down. The Reign would be happy spending a day riding the ski lifts or exploring backcountry trails. Some riders might find the Reign to be overkill for their local trails, while others will find the Reign has the ability to smooth out trail obstacles, making for a more enjoyable descent. Ultimately, the Reign will get along best with a rider who is willing to loosen the reins and let this wild horse run. 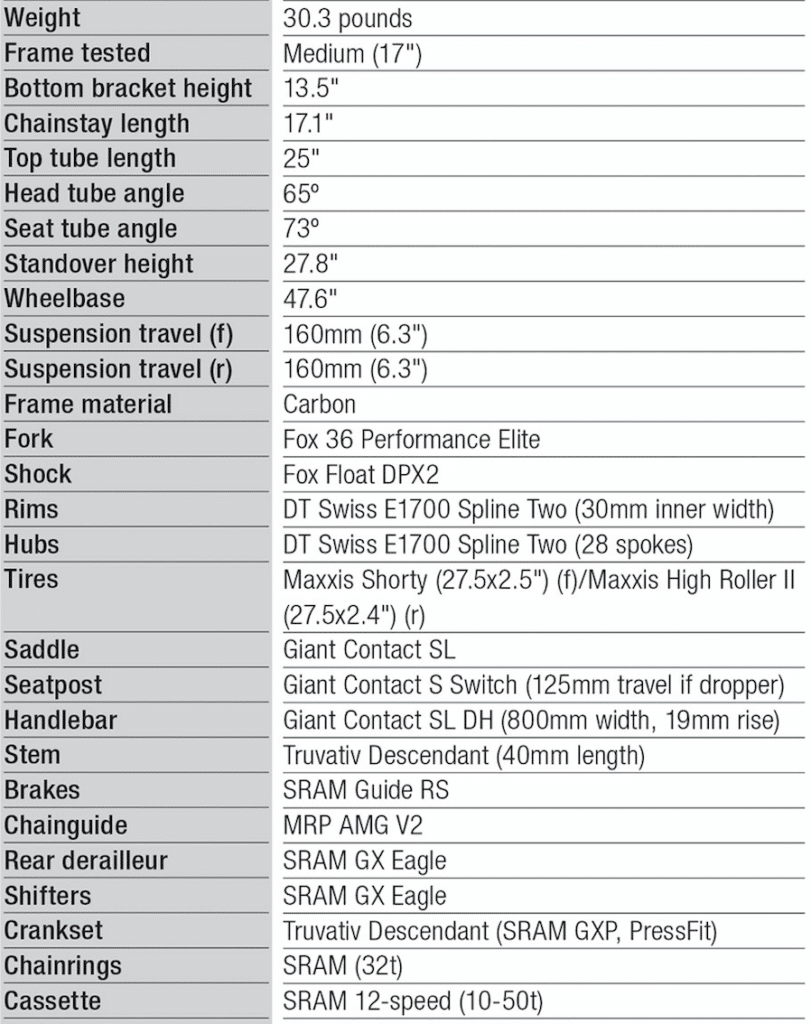