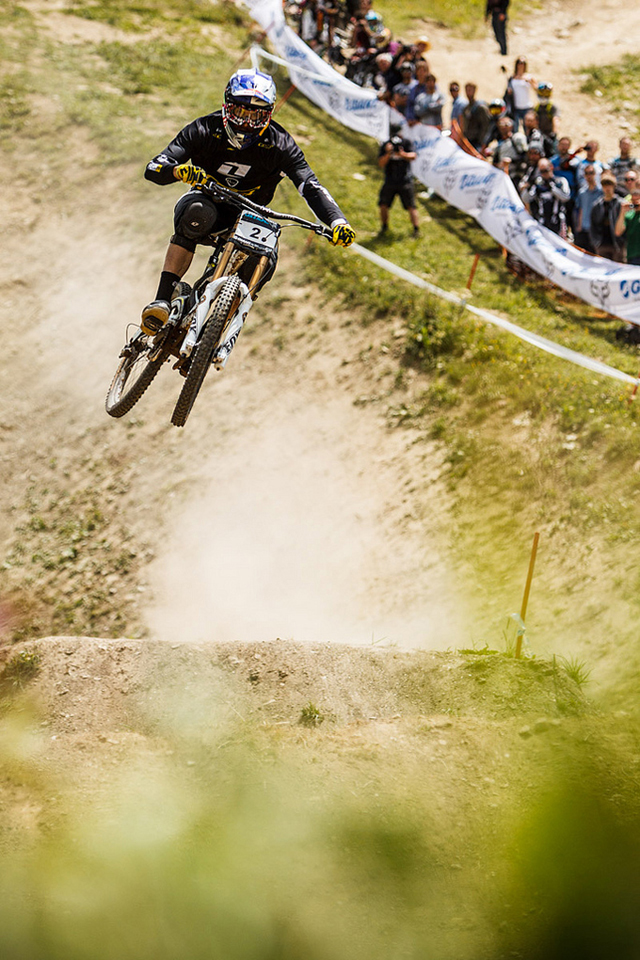 After qualifying first on Tuesday, Great Britain’s Gee Atherton came through in the finals to take the win in the inaugural Giant Air DH supported by Fox with a time of 4:26.87. New Zealand’s Sam Blenkinsop was through the gate second fastest and South African Andrew Neethling grabbed the third spot.
“The track was good and super fast. We thought it was going to be a lot calmer but it was a gnarly track. Good fun though, it is a really good course,” said Gee Atherton. 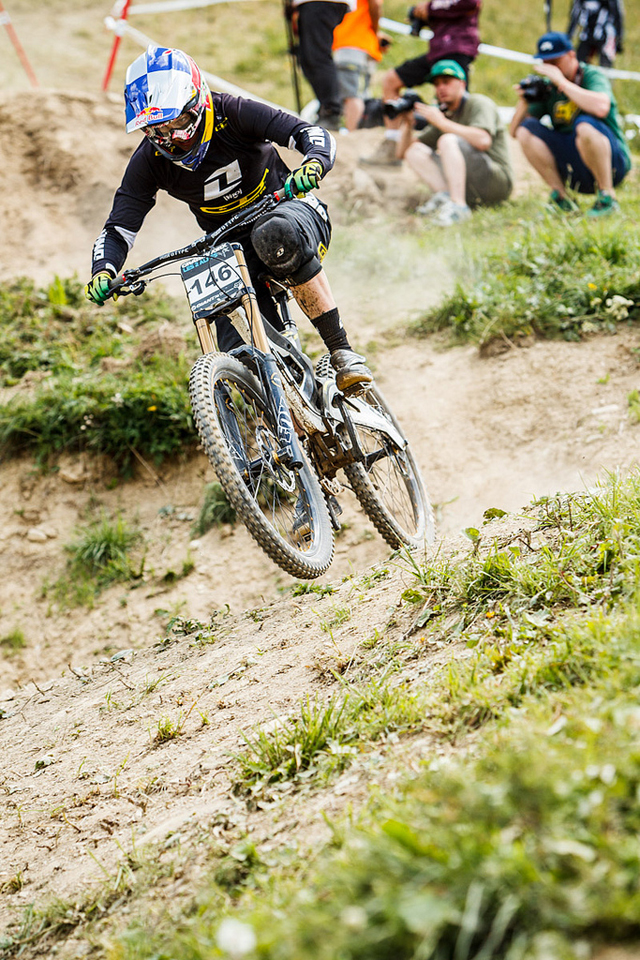 Rachel Atherton followed in her brother’s footsteps to also take first place in both the qualifications and finals, crossing the finish line in the final nearly fifteen seconds faster than Australian Tracey Hannah in second place. France’s Myriam Nicole was awarded third place.
“The track is one of the hardest tracks I have ridden this year, for sure,” Rachel Atherton said. “I didn’t fancy going off the big step down. I need to stay healthy for the World Cups. I just tried to ride the track good and fast, and get some lines. You have to push where you can and hold back when you are nervous.” 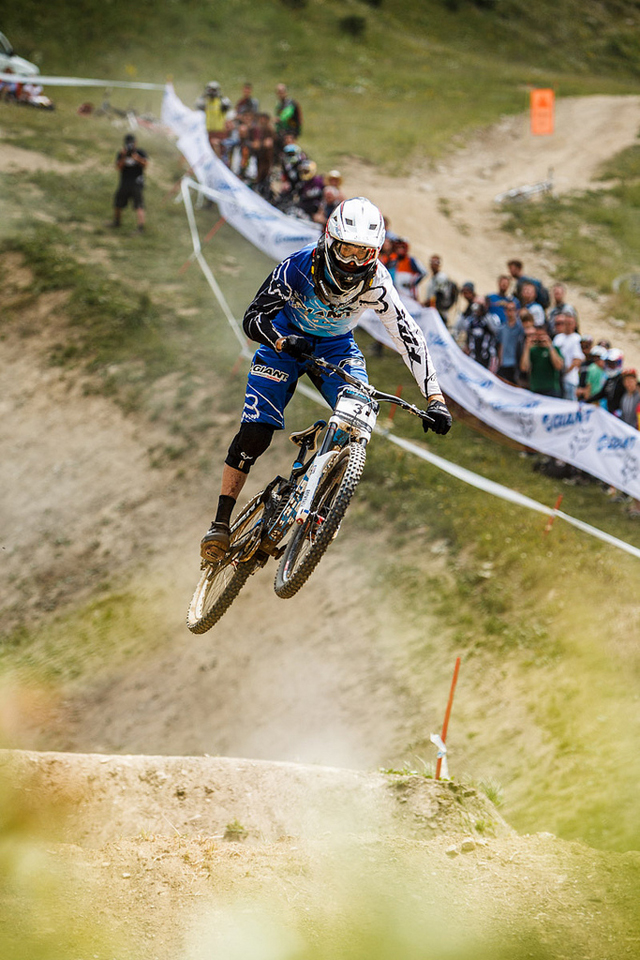 The course is a new addition to the Les 2 Alpes Bike Park and was designed by Mick Hannah and Marc Beaumont, who just missed the podium coming in fourth overall. The trail crew of the resort of Les 2 Alpes built the trail with Ayton Concept and Seb Chovet, co-producer of Crankworx Les 2 Alpes.

“We started building the track ?Fury’ for the Air DH last October 2011 and we finished this year in June,” says Chovet. “We will take rider feedback to integrate some changes and I have already talked to designer Marc Beaumont who said it was a tough race but that he loved the track.”

“Fury” drops a total of 700m over a length of 2.8 km and is open to the public as a double black diamond trail in the Les 2 Alpes Bike Park. The length coupled with technical sections of single track and huge jumps, including the now infamous road gap that took out third place qualifier Aurelian Giordanengo, make “Fury” an apt name. 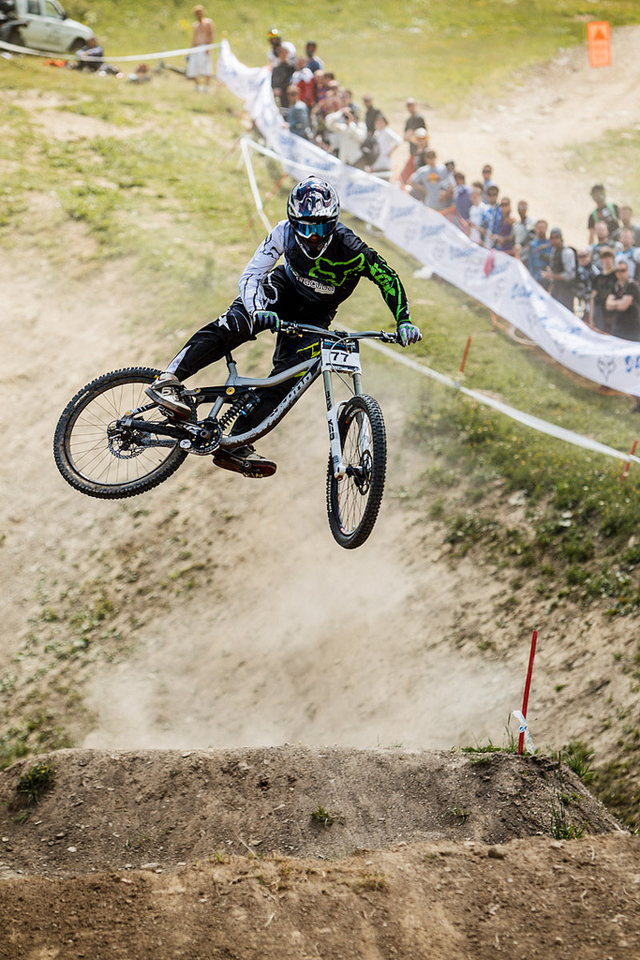 Unfortunately, there were no time bonuses for huge whips. Photo: Stef Cand | stefcande.blogspot.com

Next up on the Les 2 Alpes’ schedule of events is the SRAM Dual Speed & Style, on Thursday, July 12 at 6:30-8:00pm. This hybrid event will see competitors racing through the dual course on side-by-side, throwing tricks over mid-course booters while racing for the quickest time.

Live webcasts of the events will be available via Red Bull TV.
For more results and schedules, visit the Crankworx website here.

Photo of the Day: Crankworx Bail, Part 2 of 2