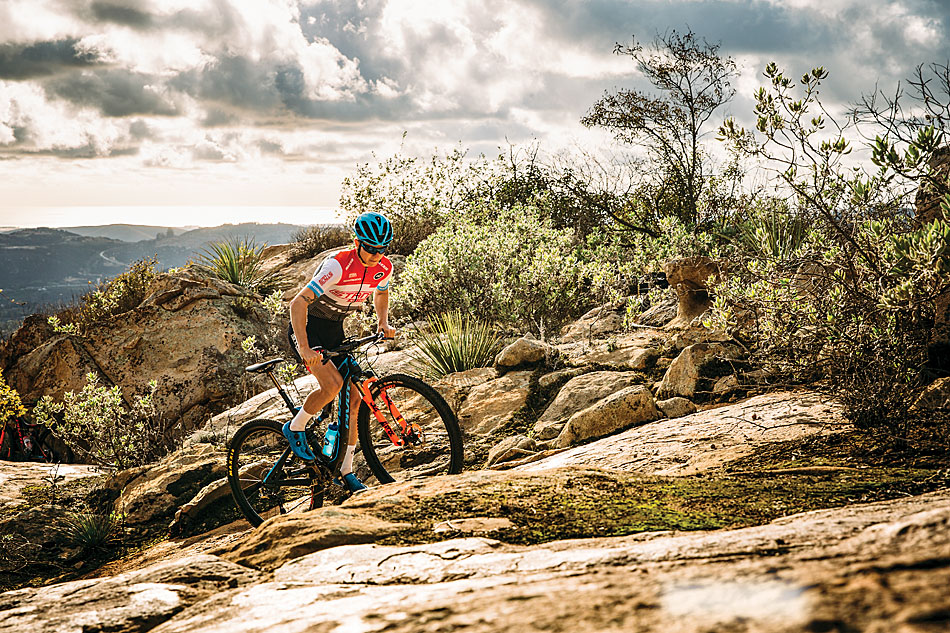 Park City, Utah, is recognized for having one of the best trail systems in the country, maybe even the best, so it’s not surprising that some of the top young riders in the country are growing up in that area.

Keegan Swenson is a case in point. Keegan, now 24, told us, “My parents got me into riding mountain bikes when I was 7 or 8 years old.” Keegan joined a youth mountain bike program shortly after that. “We met once or twice a week,” Keegan recalls. Keegan began racing on the Young Riders race team when he was about 12 years old. To say he was good would be putting it mildly. Keegan entered his first national championship in 2009 when he was 15 in Grandview, Colorado, and finished third in the country for his age class.

The next year, he won the national title for the 15–16 cross-country division.

In 2017 he took second place in the Pro Men’s Short-Track. Keegan has been one of the top young riders in America for almost 10 years. Sooner or later, we expect he’ll start winning national titles again. The pro ranks are hard, but Keegan Swenson is young, determined and tal- ented, and he shows no signs of giving up any time soon.

MBA: Where did you grow up? Swenson: Park City, Utah!

Swenson: Ever since I could ride two wheels; properly riding moun- tain bikes since I was around 7 or 8, though. 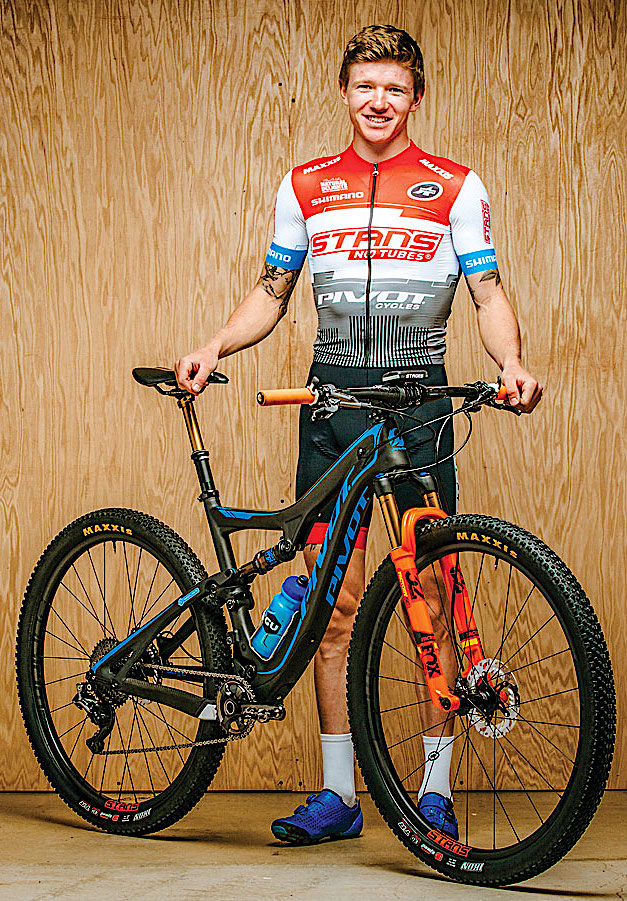 MBA: When did you first start competing in events on a bike?

Swenson: Probably around 12 years old for my first MTB race, and
I think it was a 24-inch Gary Fisher bike. Can’t remember the exact name, though.

Swenson: I can’t remember how I finished, but I do remember having fun!

MBA: What other sports do you like to do?

Swenson: I grew up downhill ski racing in Park City as a kid. I got a few podiums here and there but wasn’t the best. That’s for sure.

MBA: Can you tell us something interesting or unusual about yourself that is not widely known?

Swenson: I’m working on training my dog to walk on two legs, because I think that would be really cool.

Inside The Pros Bikes 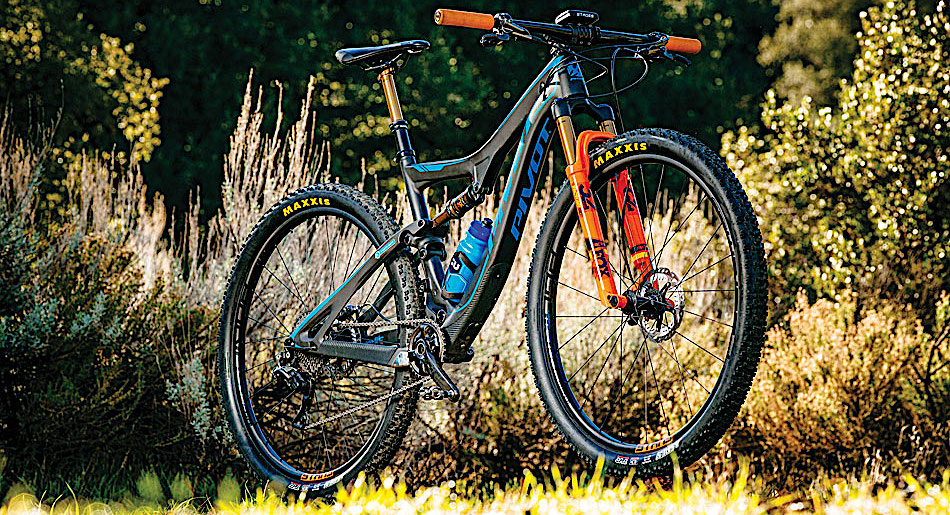 1. Frame: Pivot Mach 429 SL, carbon, 100mm rear travel, Boost 12x148mm rear spacing.
“It pedals really nice. It doesn’t bob, thanks to the dw-link and the anti-squat technology. It feels really good. I don’t have to lock it out because the pedaling platform is so good. It’s pretty light.”

4. Tubeless tire sealant. “I have all my wheels and tires set up with Stan’s NoTubes sealant.”

5. Rims.
“I race and train on the Stan’s NoTubes Podium SRD wheels. Stan’s wheels are very compliant on the hardtail. They smooth out the ride and help reduce vibration. They also hold the tire really well, so they don’t burp out air as much as other wheels. They’re smooth up and down, but they’re laterally stiff if you’re standing up sprinting or in a hard turn.” 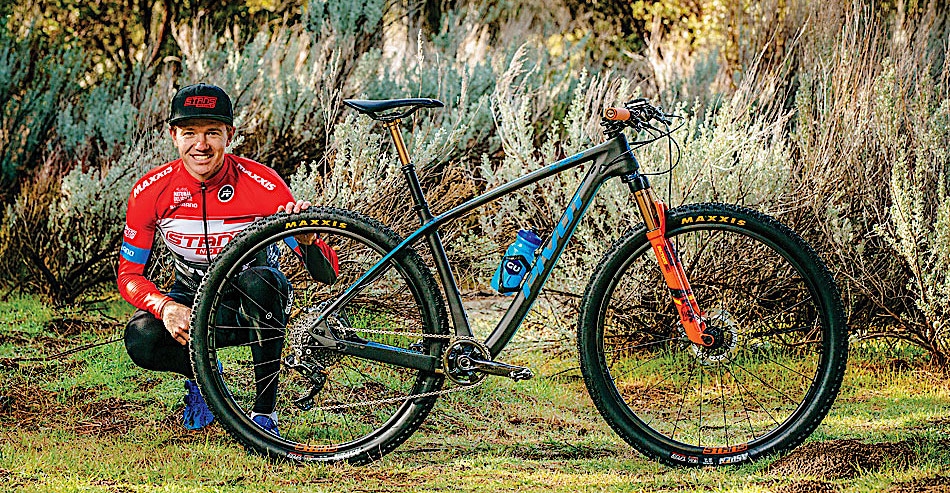 The hardtail: Like many cross-country pros, Keegan races a hardtail if the course is fairly smooth. Keegan estimates that this bike, his Pivot LES Carbon, tops the scales at around 21.5 pounds with the dropper post.

15. Pedals.
“Always Shimano XTR turned pretty much all the way up. Shimano XTR pedals are very durable, have an awesome pedaling platform and you can adjust the tension, which is huge for me.”

16. Chain: Shimano XTR. “I change it whenever my chain gauge says to or when Jerome (our team mechanic) says its time.”
17. Rear derailleur: Shimano XTR Di2.
18. Front derailleur or chainguide: N/A.
19. Shifters: Shimano XTR Di2.
20. Brake levers: Shimano XTR Race.
21. Rear cassette.
“I pretty much always use the XTR 11-40 cassette, but I do sometimes train with the XT 11-42 or 46t cassette for a little extra range.”
22. Saddle: Pro Bike Gear Turnix carbon.
23. Seatpost.
“I always use a 100mm Fox Transfer dropper post. Fox makes a great dropper. It’s light and quick. I’d heard a lot of great stuff about them. I had it on the hardtail last year and liked it so much that I added it to the other bike. It’s never a bad thing to have.” 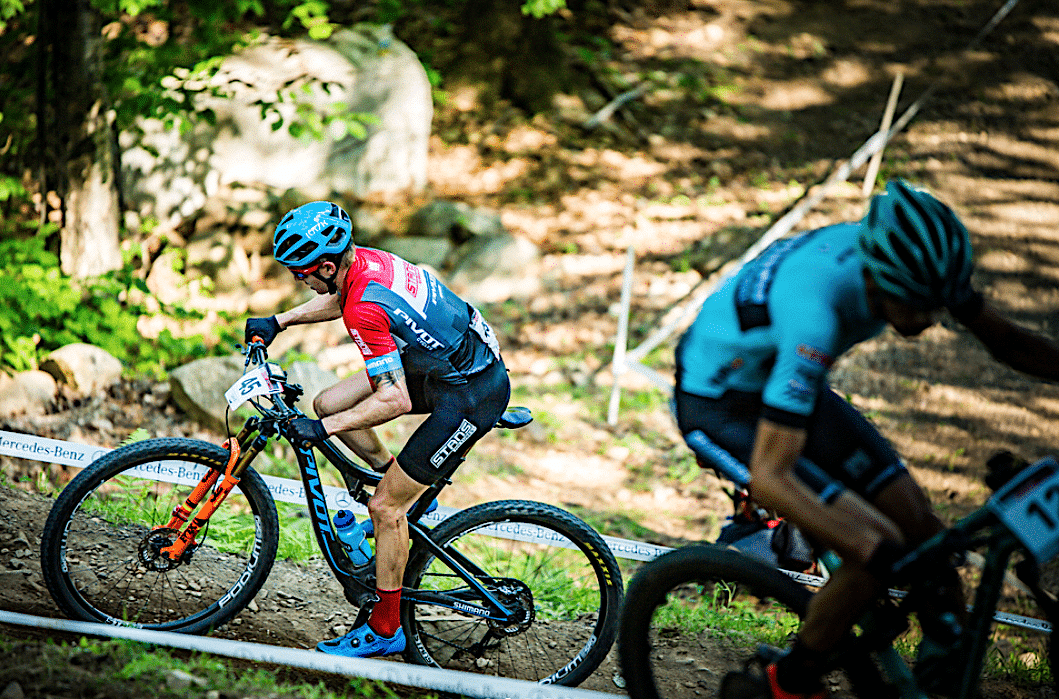