TINKER JUAREZ WILL RIDE FOR FLOYD’S OF LEADVILLE IN 2022 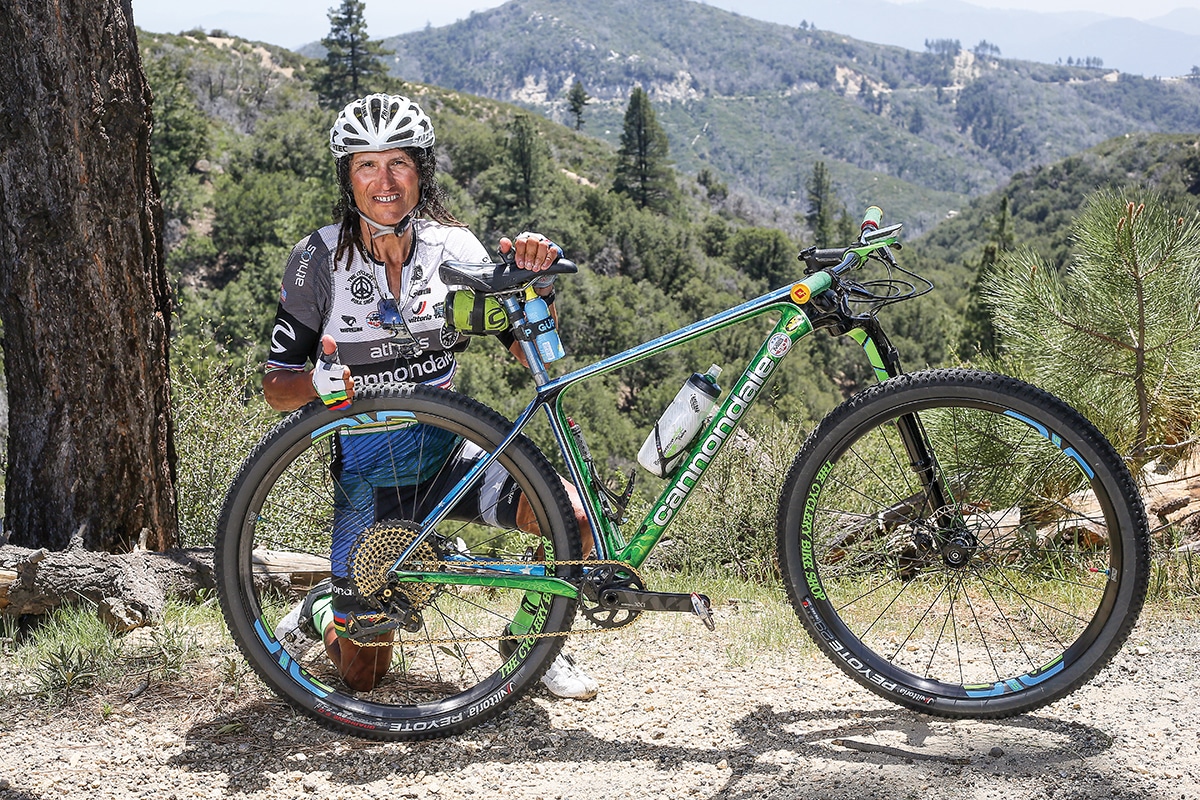 Tinker took a break from one of his daily training rides in 2020 to let the MBA staff snap a few photos of him that day with his Cannondale FS-1 hardtail bike. Photo: Mountain Bike Action

David “Tinker” Juarez revealed recently that he would be back racing again in 2022. Today, the word is out that Tinker will be riding for Floyd’s of Leadville, a company that market’s CBD oil for therapeutic uses. Without revealing too many specifics, the team has revealed that its riders will be competing in both gravel and cross-country races in the year ahead. The other racers on the team will include U23 mountain bike racer Victor Cashes, Canadian Geneviève Jeanson, Taylor Lideen, and road racer Anne Donley,

The Floyd’s team will also sometimes include the Floyd’s of Leadville founders, Floyd Landis and David Zabriskie. Both were great racers in their time. Landis was one of the top XC riders in America in the 1990s before he turned to road racing and became one of the top riders in the world. He went on to win the Tour de France in 2006, but was later convicted of doping and had to give up his Tour de France title.

Tinker Juarez had been riding for Cannondale for the past 27 years, but it was revealed recently that the company’s sponsorship of Tinker was ending this year.

Tinker has what could well be the longest-running pro career in bicycle racing, going all the way back to 1977. Tinker was a top BMX star in the 1970s, even when he was 15. He was recognized as the first unofficial “King of the Skateparks” for his aerial abilities at the Lakewood Skate Park in Lakewood, California, in the late 1970s, even scoring the cover of BMX Action Magazine in April 1980 with his high-flying skatepark skills. At the time, he was also one of the top BMX racers in the sport. Tinker joined the pro ranks in BMX in 1977, the year he turned 16. He was also one of the founding members of the Professional Racers Organization, the PRO, the first professional BMX racers’ association, which also started in 1977.

Tinker began his switch from BMX to mountain bike racing in 1986. He raced some BMX events up until 1987, but after that, he was done. He soon rose to be one of the top cross-country riders in mountain biking. He won three U.S. National XC Championships in his prime racing years in the pro class of mountain biking in the 1990s.

During his professional XC racing career, which began in the late 1980s and went through all of the 1990s (and even a few years longer), Tinker regularly battled Ned Overend and John Tomac in his early years of racing (Ned and Tomac won the UCI’s XC World Championship titles in 1990 and 1991, respectively), as well as the other legends of the sport. Tinker rose to the top position in the U.S., winning the NORBA (National Off-Road Bicycling Association) Pro Men’s XC title three times in the 1990s (’94, ’95 and ’98), while he also moved up to rank among the top XC racers in the world.

Tinker won two Elite Men’s World Cup XC races in the 1990s, his first one coming at Mont-Sainte-Anne, Quebec, in 1993, and his second one coming the next year at Silver Star, Briitish Columbia. He also won the silver medal in the Elite Men’s Cross-Country competition at the UCI World Championships in 1994. Tinker competed in the Olympics in both 1996 and 2000, finishing 19th and 30th. He was 35 and 39 years old at the time of his Olympic efforts. 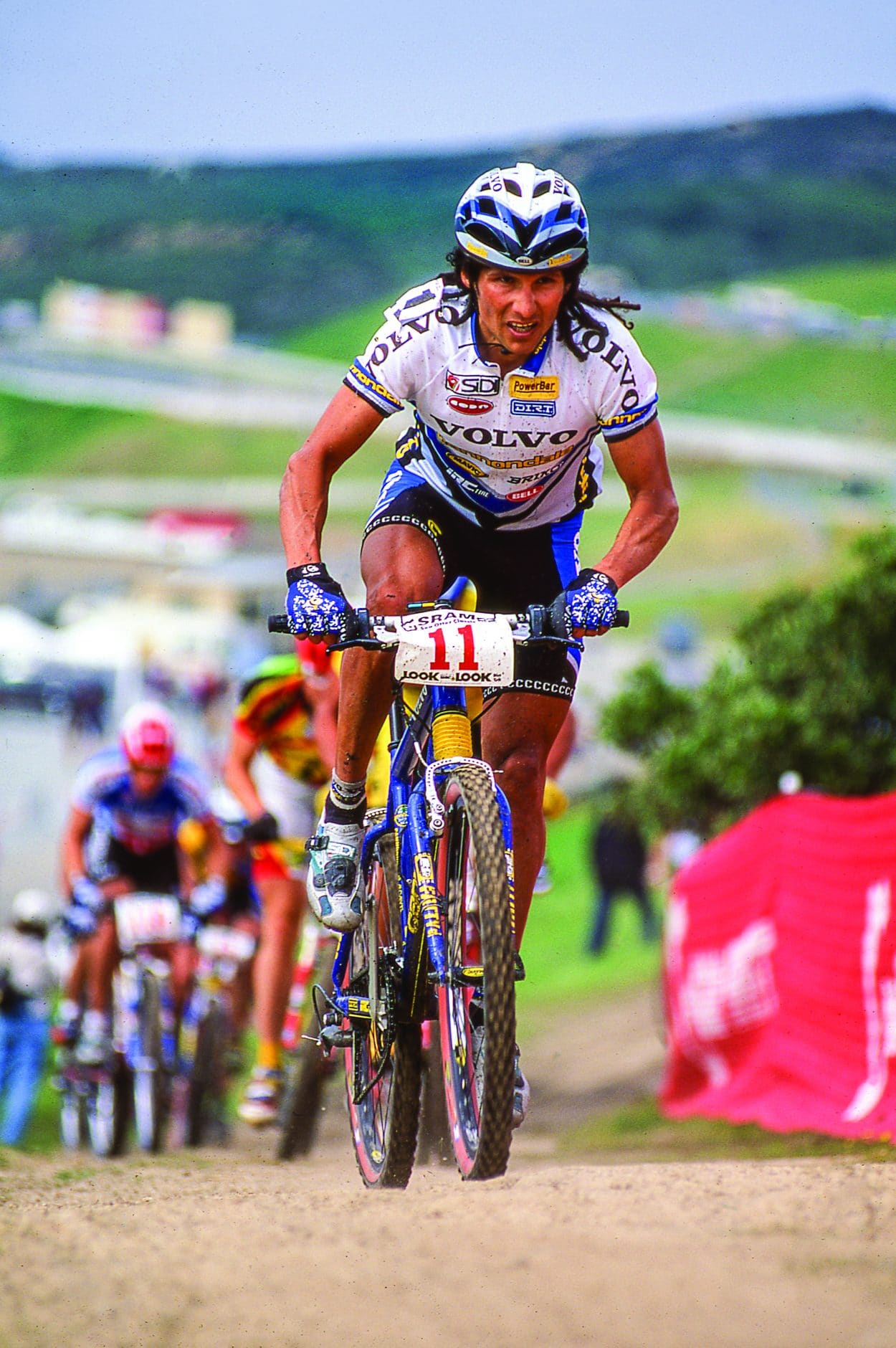 Tinker leads the pros up the first climb at the Sea Otter Classic during his Pro XC career. Photo by Chris Hatounian.

When we interviewed Tinker in 2020, we asked him about some of his titles. Here’s what he told us:

Tinker turned 60 on March 4, 2021, but he has continued to place in the top three in many (maybe most) of the events in which he competes. His fitness is phenomenal. Pro racers 20 or 30 years younger than him, including former Road Bike Action editor Neil Shirley, talked about how they could never beat Tinker, no matter how good they got, even though Tinker was in his 40s or 50s at the time.

we have a few bikes where [sic] looking at, buy [sic] no matter what I’ll be on a new brand before my first race next year.”

MORE NEWS FROM TINKER ON HIS 2022 MOUNTAIN BIKES