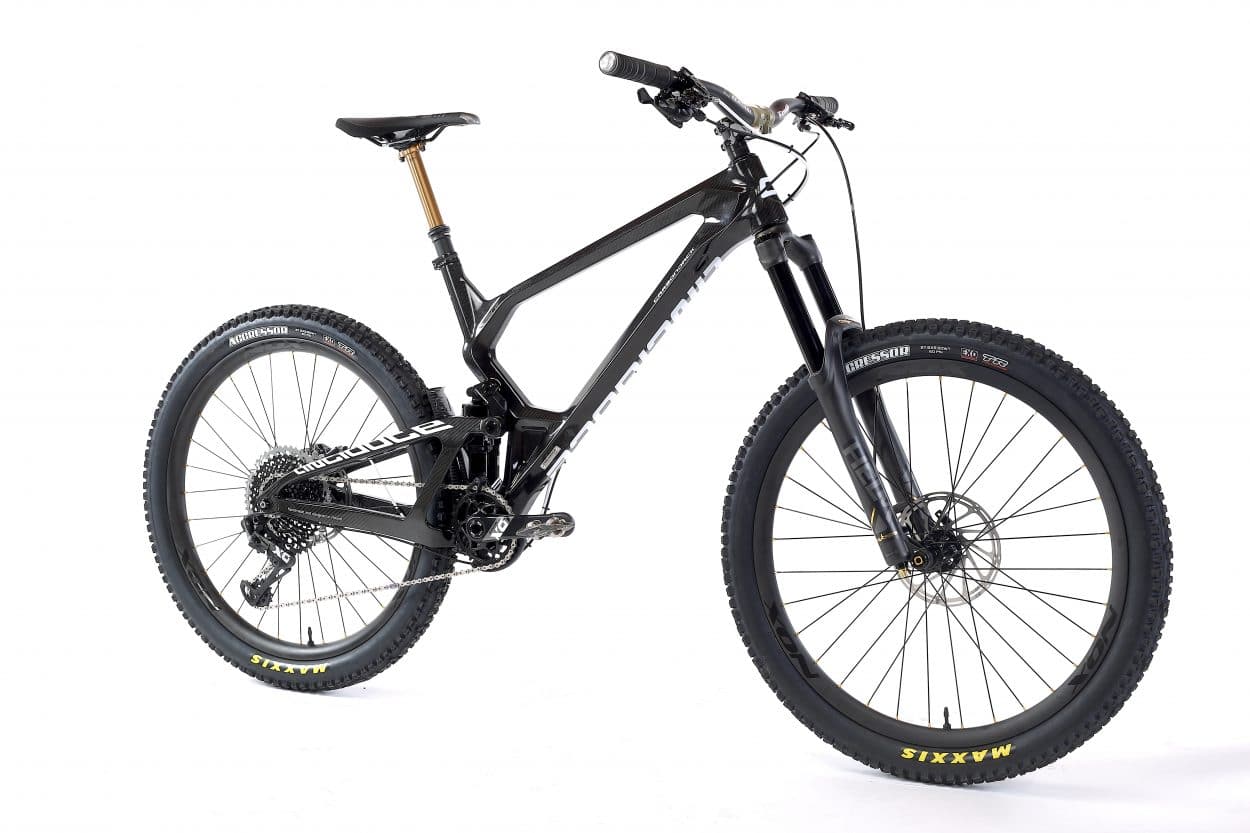 The words “handmade bike” often call to mind images of steel-framed hardtails built by fabricators with impressively long beards wearing tattered flannels. Meanwhile, Antidote’s version of handmade couldn’t be further from that. The Polish company was founded in 2009 by two young designers passionate about downhill and 4-Cross racing. In 2011, Antidote built its first carbon frame and quickly won a host of design awards. Antidote’s bikes are not on the radar of many American mountain bikers, since they have been predominantly sold on the other side of the globe, but we received a phone call from Fluid Focus, a suspension specialist from San Marcos, California, that is the U.S.-based distributor for Antidote bicycles. Our wrecking crew was offered the chance to put Antidote’s 160mm-travel enduro bike, the CarbonJack, to the test. And being the bike nerds we are, we jumped at the opportunity to ride this handmade carbon frame.

Since the CarbonJack is not a mass-produced frame, you are unlikely to go for a ride and run into someone with the same bike. For some riders, that’s a major plus. The CarbonJack is not only made to be a striking bike out on the trails, this 160mm-travel enduro machine is designed with performance in mind. The bike Handmade enduro shredder features modern geometry on par with other bikes in its category and is best suited to someone who can appreciate the hours spent building its frame. 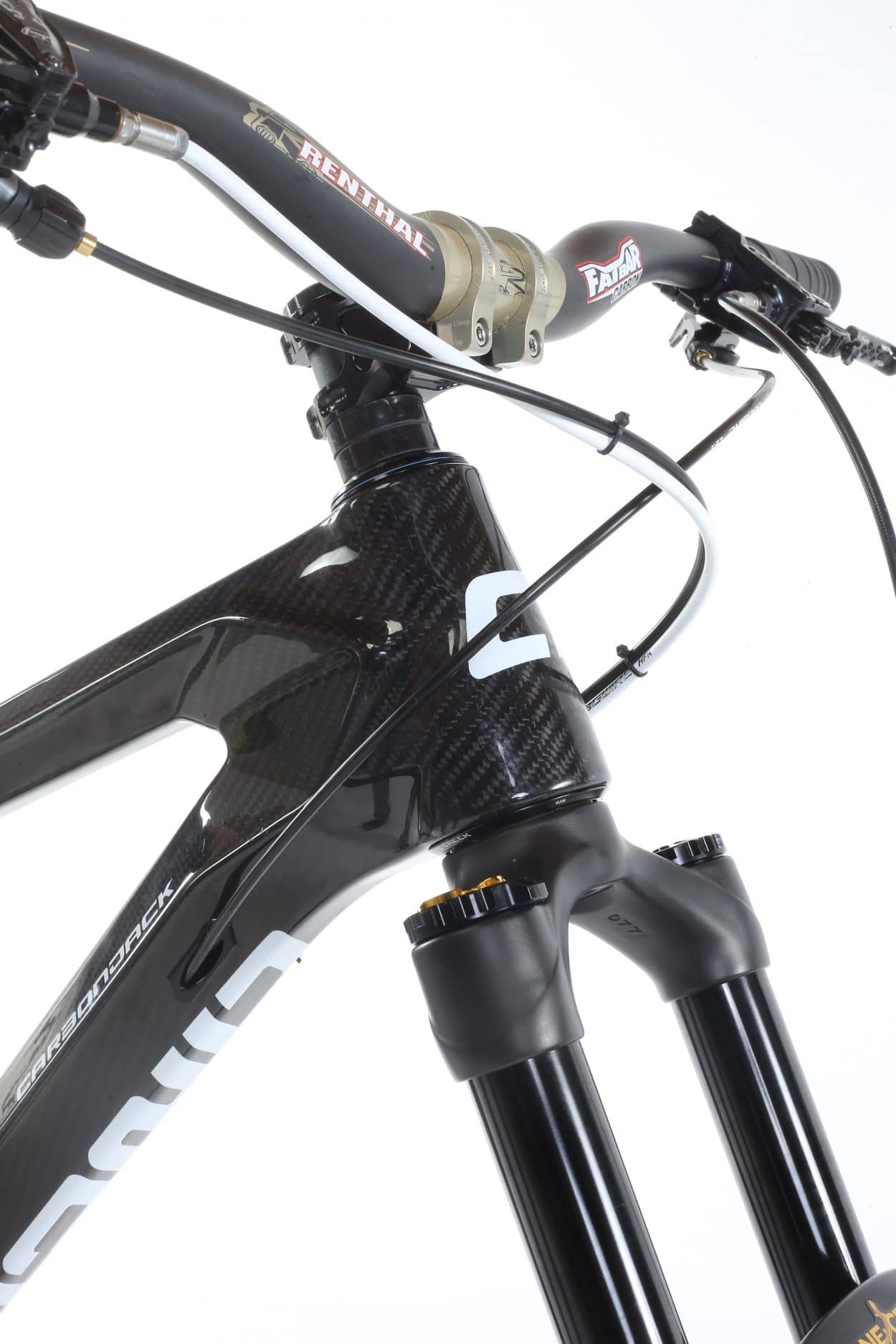 The CarbonJack is made from a custom carbon layup and features a unique suspension design that is likely to catch your eye. Each frame is hand-built in Poland using a blend of carbon and Vectran materials. The bike features external cable routing down the non-drive-side of the bike, except for an internally routed cable slot on the drive side for its dropper post. A non-Boost 12×142mm rear hub is used, as well as a threaded, 73mm bottom bracket shell. The CarbonJack features Antidote’s FDS (Floating Dampening System) suspension that floats the shock between the front and rear triangle. A carbon fender is integrated to protect the shock. The design is said to increase small-bump sensitivity, stay active under braking and lower the center of gravity.

Fluid Focus, the U.S. distributor, sells the CarbonJack as a frame only without a shock for $3950. The frame can also be had with a Cane Creek shock for $4399 or with a shock and fork for $4998. 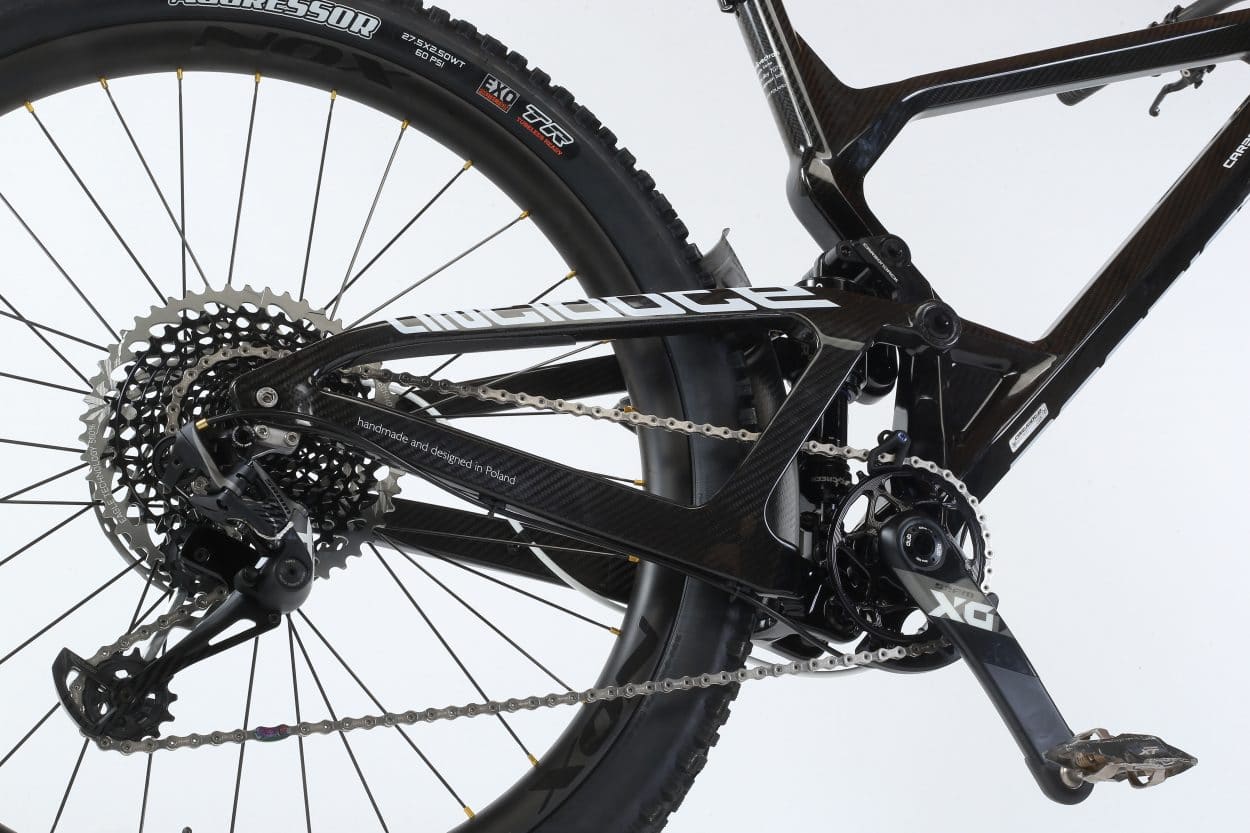 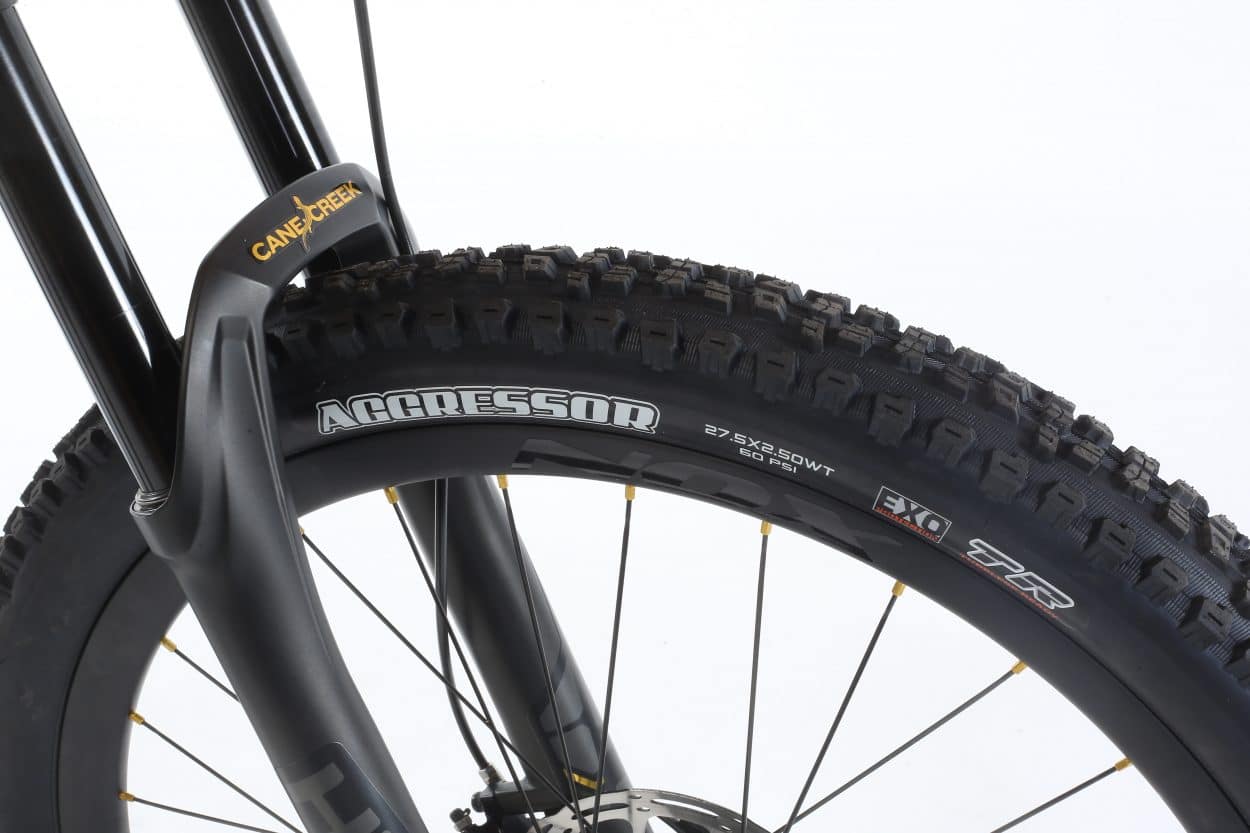 Our test bike was custom built from the ground up and featured top-notch components throughout. A pair of NOX carbon wheels with Maxxis rubber provided traction and helped keep our bike on a strict diet. We opted for Cane Creek suspension components, using a Helm fork and a Double Barrel Air shock. Our drivetrain consisted of an XO1 Eagle kit and featured an Absolute Black oval chainring. A Renthal cockpit gave our testers great control, and Hope M4 brakes offered loads of easy-to-manage stopping power. Last but not least was a Fox Transfer post, along with a Wolf Tooth remote. 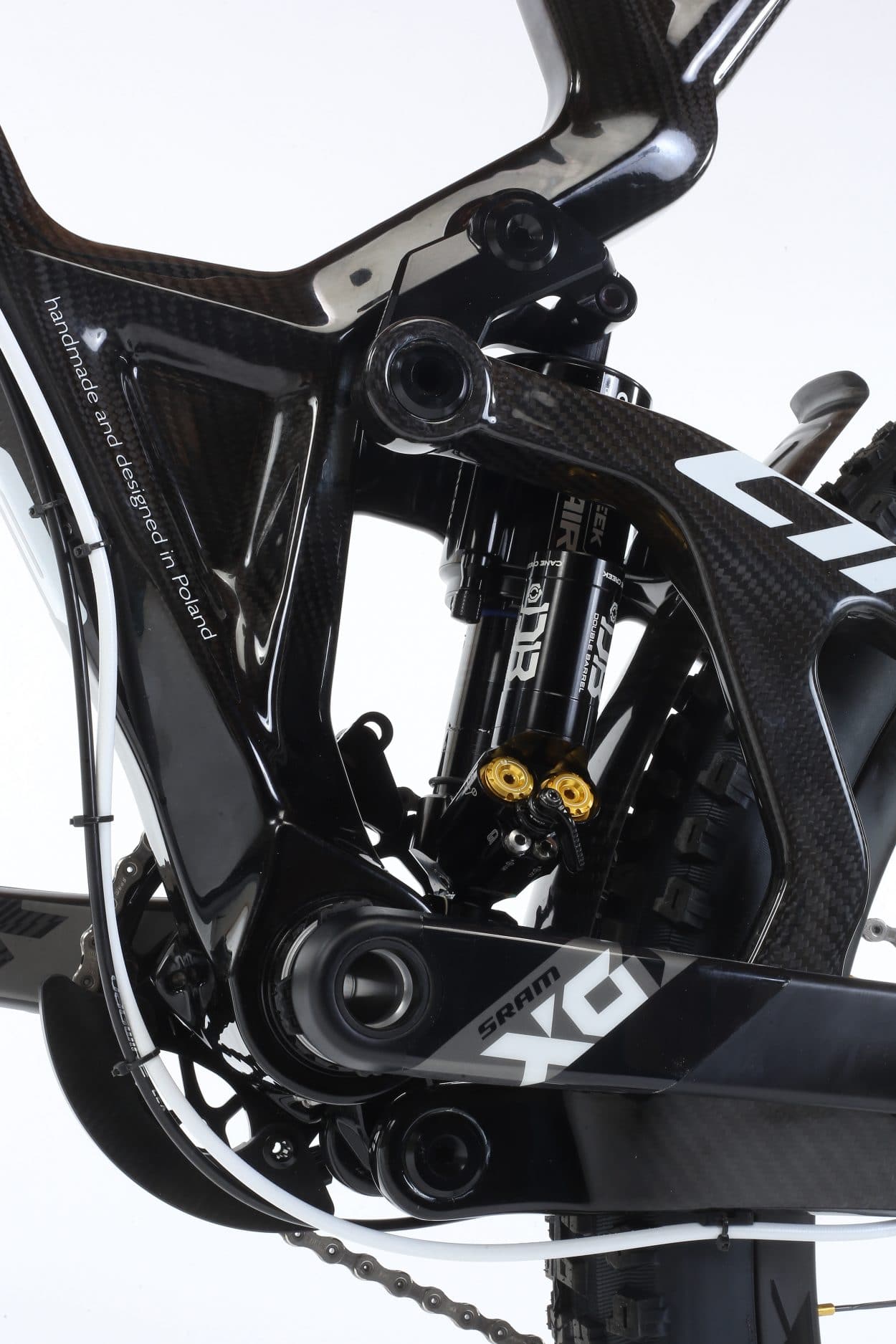 Setting sag: It’s not often we get to test a bike with Cane Creek suspension, so we needed a few extra days of riding to get the suspension dialed in just right. What sets the Double Barrel Air shock apart from others is its ability to independently control high- and low-speed rebound and compression. Since Cane Creek doesn’t offer a tuning guide for this Antidote, we simply set the shock in a neutral position. We then followed Cane Creek’s Quick-Tune guide to help dial in our preferred suspension feel.

Once we found a setting that worked well with our riding style, we switched our attention to the Helm fork. We ended up with 20-percent sag and then focused on our high- and low-speed 46 compression settings in order to fine-tune the fork for our terrain. The low-speed compression was set near the middle to aid out-of-the-saddle pedaling and to prevent the fork from diving under heavy braking forces. Our high-speed compression was then set two clicks from open; however, this setting changed depending on our riding location. Mellower trails required more compression, while rocky ones forced us to dial it back for a softer ride. 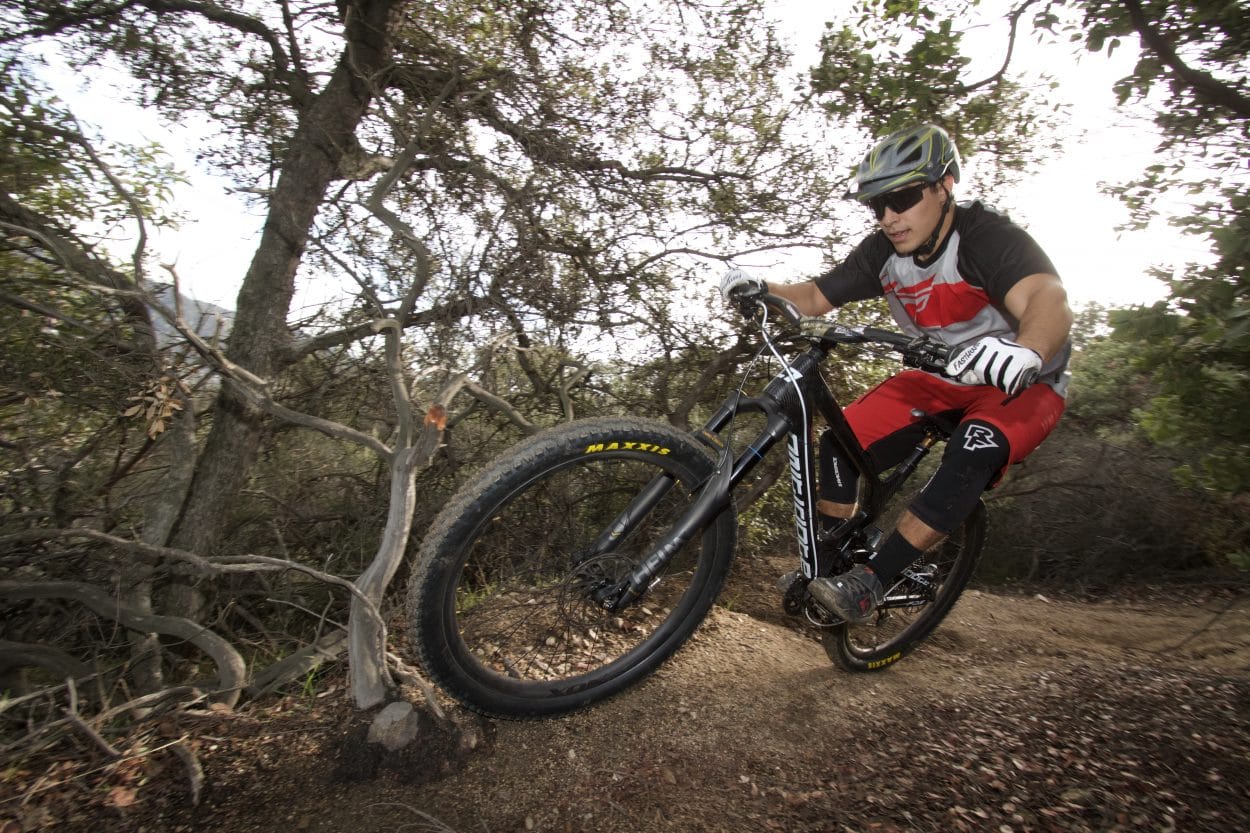 Moving out: There were two things that immediately jumped out at our test riders. The first was a major concern while the other was just a bit of a letdown. The major concern is that the interrupted seat tube prevents full insertion of your seat-post. This basically means that if you have shorter legs, this bike might not work for you, especially considering frames are only offered in medium, large and extra large. Our main tester was 5-foot-9, and with the 125mm-travel post fully inserted, he could barely reach his flat pedals. A pair of clip-in pedals provided additional height, but shorter riders will have to compromise with less travel in their dropper.

The second thing that might turn off some riders is that the frame has no place for a water bottle. We know, this might not be a big deal, but come on, it’s 2019. Every enduro bike deserves a water-bottle mount these days. 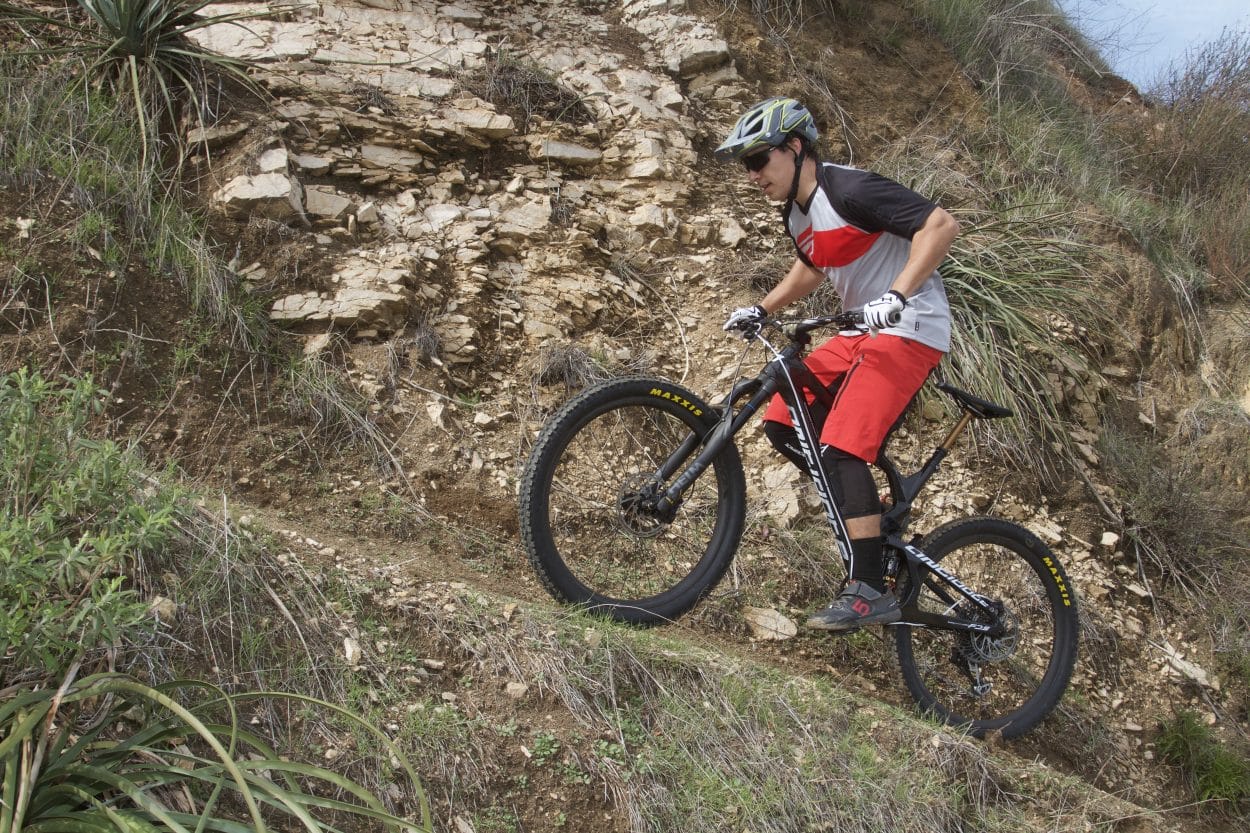 Climbing: One thing about the Antidote that definitely doesn’t disappoint is its ability to climb. We’re not quite sure if it’s the lightweight carbon frame, Eagle drivetrain or FDS suspension; maybe it’s a combination of all three. It didn’t matter if we were on a steep fire road or a technical rocky ascent. The Antidote provided excellent traction, and there was minimal shock movement, whether we were pedaling in or out of the saddle. 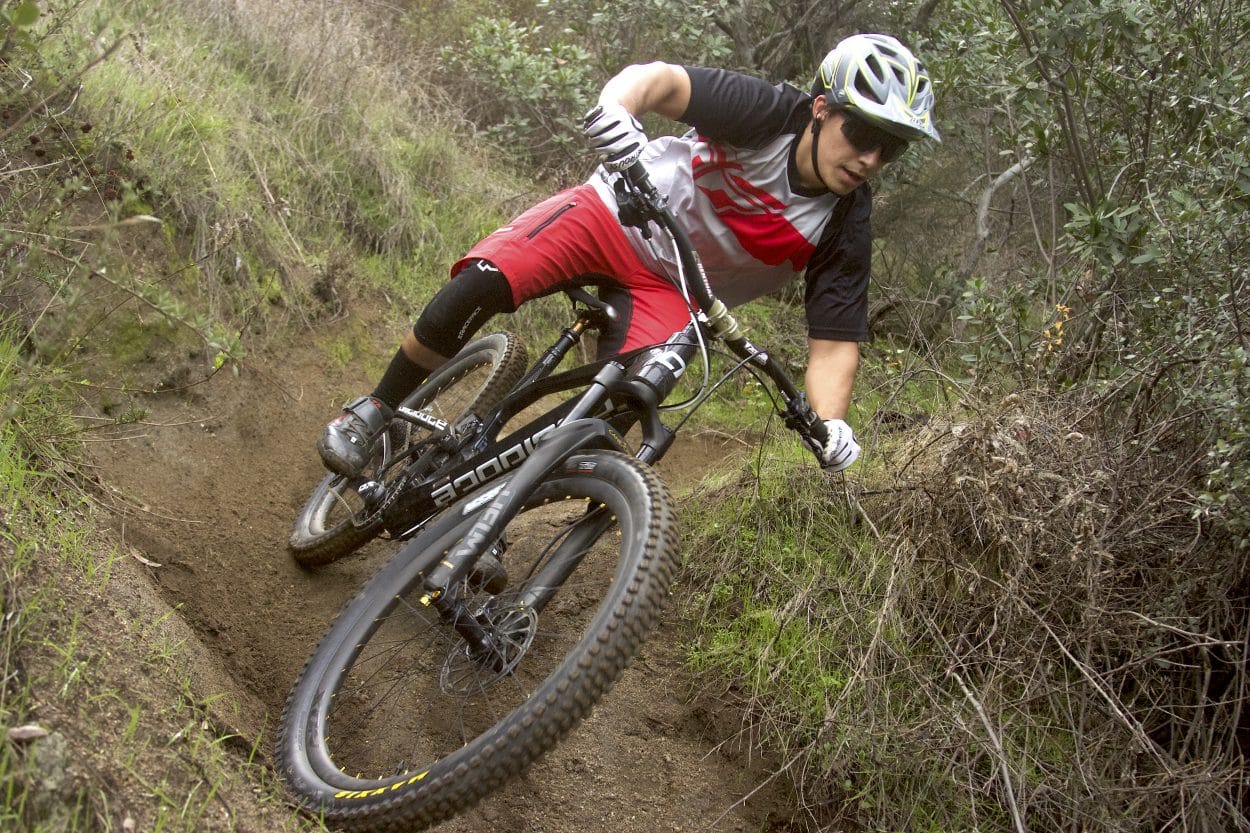 Cornering: The CarbonJack features a tight wheelbase at 1183mm for a size medium, helping it feel nimble in the corners. It also has short chaistays at 438mm. The riser bars on our custom build made it hard to place our weight over the front wheel in corners, but it felt great when the trails got steep. It was a trade-off we had to get used to. All in all, the CarbonJack provides snappy handling on tight trails while retaining stability for faster ones. 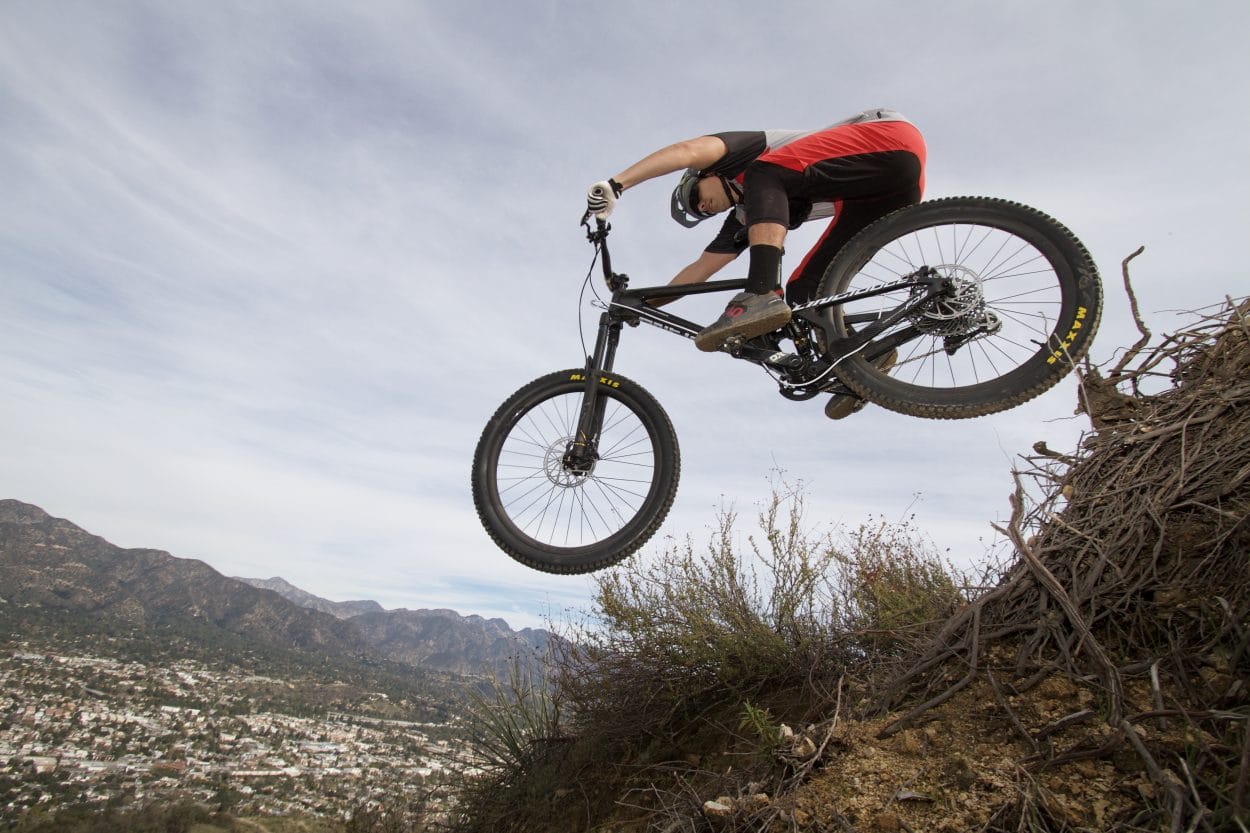 Descending: Like most enduro bikes, the CarbonJack shines on the descents. The FDS suspension offered confidence over rough terrain and managed to easily get out of its own way when hitting sharp rocks and other trail obstacles. In fact, its ability to not get hung up was one of our favorite features of this design. Small-bump sensitivity felt spot-on, allowing our testers to maintain traction and control at higher speeds. The 65.5-degree head tube added to the bike’s stability. Some of our testers would have liked a longer reach to meet modern demands, but managed to get comfortable after a few rides.

Since these bikes are sold as frame-only options, your list of upgrades will be long. When building a CarbonJack, it’s important to consider your dropper-post length, as you likely won’t be able to fully insert the post, making the overall seat hight taller than you planned for. Another thing to keep in mind is that the bike doesn’t have a Boost rear end, so you’ll want to make sure you buy a wheelset that can be used with this bike. Often a non-Boost hub can be converted to Boost with adapters, but this doesn’t usually work the other way around. Keep these things in mind during your build and you’ll be less likely to pull your hair out over parts that won’t fit. 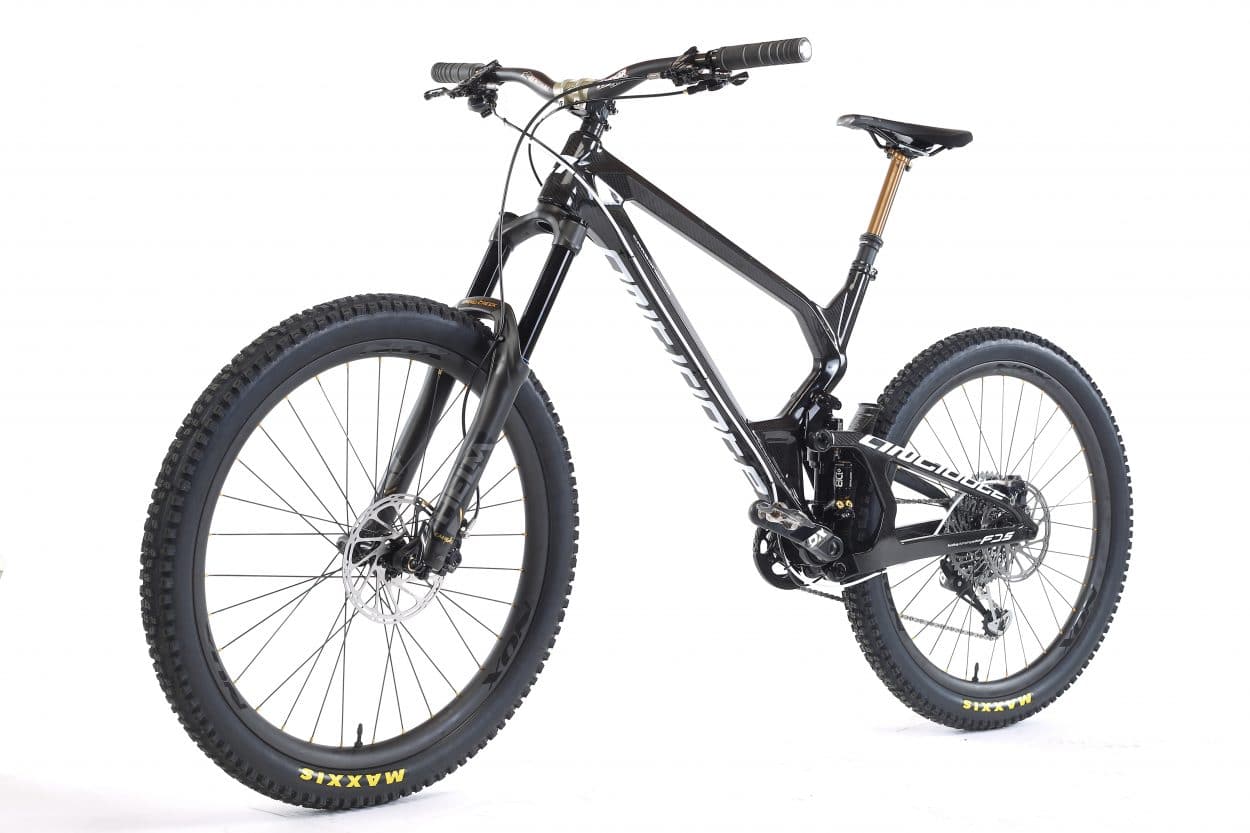 The Antidote CarbonJack has a striking carbon frame that offers superb craftsmanship backed up with performance. It’s also backed by a lifetime warranty. The bike rides great and will turn heads on the trails. With that said, we did have our gripes. First was the 142mm rear end. Next was the lack of a bottle cage, and last was the interrupted seat tube. Overall, the CarbonJack is a stellar bike, but with a frame that costs nearly as much as a competitive complete bike, we would have a hard time recommending it to the average rider. But, if money is no object and you want a unique bike handmade in Poland, then the CarbonJack might be the enduro rig for you. 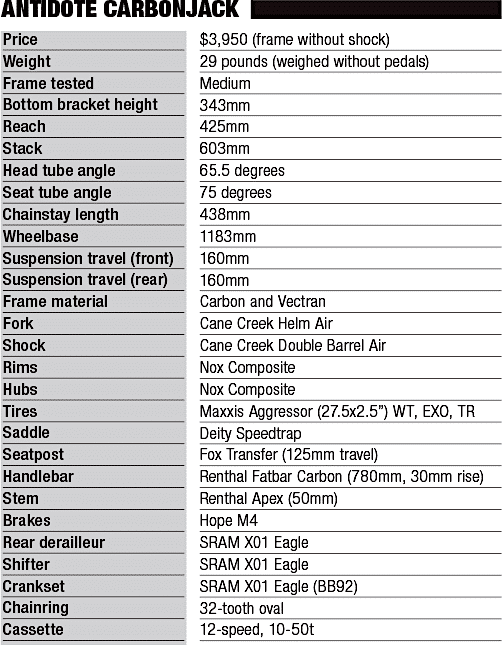