Which Ti hardtail is right for you? 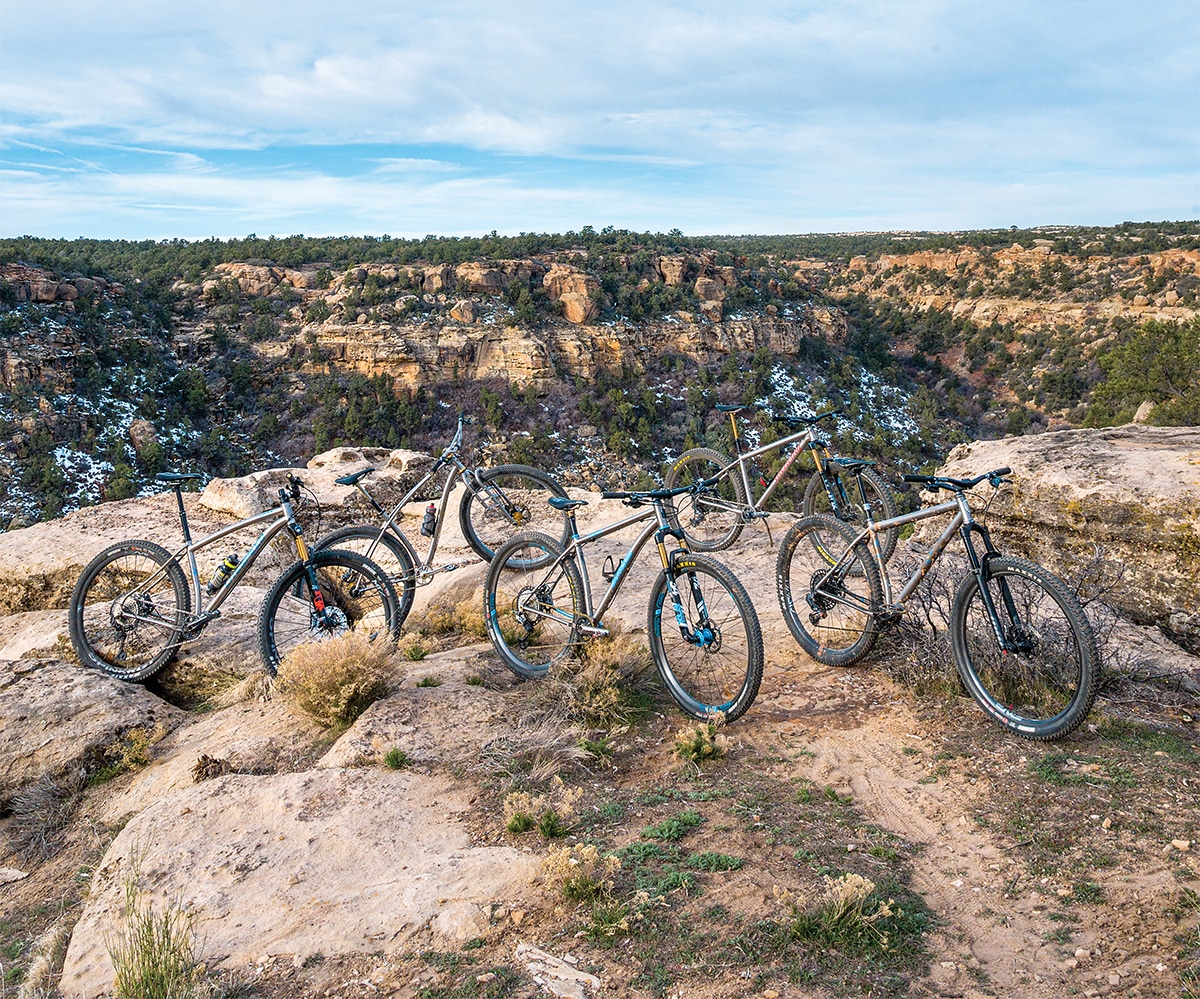 Modern carbon full-suspension bikes and eMTBs are amazing, but the MBA wrecking crew also loves the simplicity, weight and efficiency of a hardtail. In fact, every one of us has a hardtail in our personal collection. And, the only thing better than a hardtail is a titanium hardtail. Actual benefits aside, there is just an intangible, magical, aspirational feeling you get with Ti. Many, including some of us here at MBA, thought that carbon technology would eventually kill off the gray frames, but the opposite has happened—titanium has not just survived, it has thrived, and for very good reasons. Long-term durability on a titanium frame can last decades, not seasons. Let’s not forget about the seemingly endless custom options offered by frame builders, too. And, refurbishing services offered by most titanium frame builders can make old, tattered Ti frames look new again. And while it’s cliche, there is a special ride quality that comes with titanium. They tend to be lively, smooth and simply addictive to ride. We gathered five of the hottest Ti bikes on the market and tested them in the mountains near the MBA headquarters and then in Hurricane, Utah, to see what makes them special.

With a 100mm fork and steep aggressive geometry, there is no mistaking Sage’s Optimator for anything but a full-blown cross-country race bike. Its sole purpose in life is getting around a race course or from point a to point b as fast as possible. WIth trail-focused hardtails being all the rage as of late, it has been a while since many members of the wrecking crew had thrown a leg over such a titanium steed. Many of us wondered how it would stack up in a modern world full of composite designs. Sage’s CEO and founder Dave Rosen was generous enough to loan us his personal Optimator so we could find out. 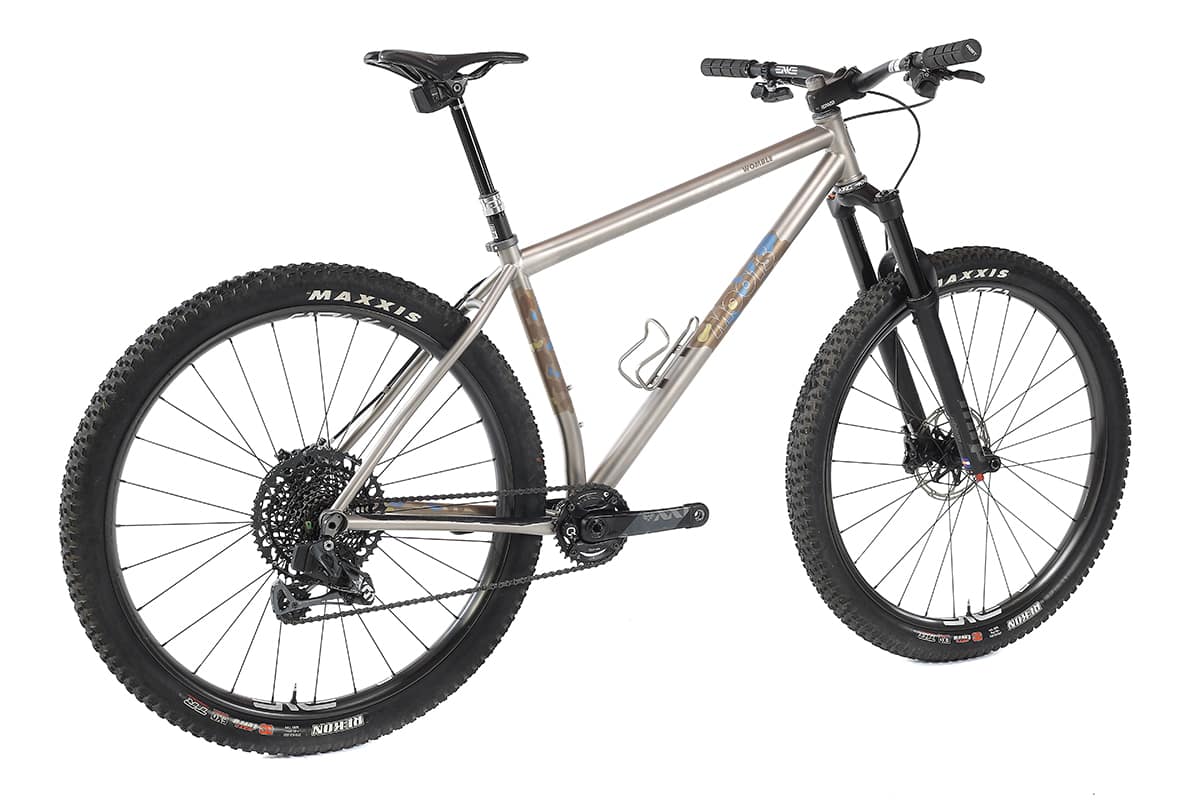 When a little bit of Colorado and Arkansas combine

Okay, if you’re new to mountain biking and have recently visited the Moots website, you’d be forgiven if you came away a little confused after seeing so many road and gravel bikes filling the screen. But, don’t despair, because despite the brand’s immense popularity in the drop-bar world, if you’re in the market for a titanium hardtail, you’ve still come to the right place.

Moots was founded by Mountain Bike Hall of Famer Kent Eriksen in the high-elevation Colorado town of Steamboat Springs back in 1982. While the brand has changed hands a few times over the years, one thing has remained constant—the marque is famous for producing beautifully crafted, and, yes, expensive titanium frames.

The Womble is designed to be an all-day singletrack performer designed around a pair of 29-inch wheels. Curiously, despite Colorado’s own renown for world-famous singletrack and mountain passes (and a promo video that touts the bike being tested in the Rockies), Moots named the bike after the Womble Trail in Mt. Ida, Arkansas.

Alchemy is a boutique brand out of Denver, Colorado, that makes everything from carbon full-suspension mountain bikes to electric gravel bikes. The newest addition to Alchemy’s lineup is a 29-inch-wheeled titanium hardtail named the Argos. This handmade Ti bike got its name after a rugged section of trail near its headquarters. It features progressive trail-focused geometry and can be ordered with a long list of custom options.

Too weird to live, too strange to die

It’s back! Our readers might remember the two Black Sheep models we tested from frame builder James Bleakly. Flashing back to 2016, Bleakley fabricated a massive 36-inch-wheeled titanium frame for us. Since then, Bleakley has discovered how to use a 32-inch wheel size to build on, and, best yet, we’ve had a long-term ride on this latest creation. Months after our initial review (MBA, August 2021), we’re still riding it and still wrapping our heads around the big-wheeled beast. There’s no missing this bike on the trails and although unorthodox, we’ve been surprised with how Bleakley’s creation rides. Since we had it on hand, we just had to compare it to the others and see where it really fits into the custom Ti hardtail puzzle.

The Tennessee way is always a unique way

In addition to Litespeed being one of America’s most notable titanium frame builders, it’s safe to say that over the course of nearly four decades that we’ve been testing bikes, when it comes to titanium mountain bikes, we’ve tested more models from the Tennessee-based brand than any other—and that’s for a good reason. When it comes to chasing new designs and tube technology, no other titanium builder has been as creative and prolific over the years. Whether it’s been their hardtails or wide range of full-suspension bikes, round or multi-shaped tubes, standard 3AL/2.5V or the more exotic (and expensive) 6Al/4V tubing, Litespeed has never  wavered in their commitment to provide as many creative touches as possible. And just by chance, the latest incarnation of their Pinhoti III hardtail is proof of that.  Beyond the bike itself, between payment plans and even home delivery, Litespeed has also gone further than most to get the bikes to you.

HOW THEY STACK UP

The Optimator was in a class of its own as the only true cross-country race bike of the group. Not even the fully rigid Black Sheep could keep it in sight on the climbs. And, as terrain tightened up, the more nimble Sage simply walked away from its wagon-wheeled competitor. This is the perfect bike for somebody who wants an ultra-efficient and comfortable bike for fast-paced, long-distance riding and racing. Even though it’s a race bike, the wrecking crew had a blast on this bike, even in trail-riding situations. It turns out that going really fast on an efficient bike like the Optimator is really, really fun.

Of this group of bikes, the Alchemy was closest to the Moots and Litespeed on paper but had a very different feel out on the trail. It felt the stiffest of the group when riding, and also felt the most at home on faster and more technical trails. Its long reach, slack head angle and short stem make it easy to keep your weight centered while picking your way down super-steep sections of trail. Because of the frame stiffness, it didn’t have the smoothness of the Litespeed or liveliness of the Moots, but it is still a very pleasant-riding frame overall. The aggressive Maxxis Minion tire combo is a spot-on spec for the bike’s intent, but they didn’t roll quite as fast as the higher-volume Maxxis Recons on the others.

The Moots Womble is most similar to the Pinhoti III from Litespeed. They are different, though—0.3 of a degree on the head tube angle, 5mm difference in chainstay length, 1 degree of seat tube angle and reach differing by 10mm. They also have a totally different feeling on the trail. For us, the Womble has a more predictable balance and response to rider input. On paper, the Litespeed is steeper, yet we felt like the Moots had a snappier, more “XC feel,” if you will. Bottom line, this one stole the hearts of all our test riders for its ride quality and the overall feel it brought to any scenario on the trail. Fun is an understatement for this extravagant titanium hardtail.

The Litespeed is not the brawler that the Alchemy is. It’s most similar to the Moots but with a different ride feel and quality. We touched upon compliance a lot with the Litespeed, and overall, the entire wrecking crew believed (and felt) it had the most. Some of our riders even felt more comfortable aboard the Litespeed than the Moots on steeper sections or rock rolls. It could have been the extra smoothness, higher volume tires or something else, but there was just a sense of confidence that the Litespeed inspired in certain situations on the trail. Both bikes have great cornering and handling, and each has its own compliance flavor, with the Moots the more lively feeling of the two. When all is said and done, Litespeed easily takes the cake for the best value of this group.

To be fair, the Black Sheep stands in a world of its own from the others in our collection. The big hoops have the drawback of oversized unicycle rim weight. This can be a tough bike to ride because of the big, heavy wheels, which are made extra heavy because unicycle rims are designed to support the full weight of the rider on one wheel—and so are the tires. The front wheel weighs 6.9 pounds; that’s a lot, especially when you’re single-speeding. Of course, there are the benefits of traction and momentum that we mentioned in the review as well. The bottom line here is that 32-inch wheels are not for everyone; however, they are wonderful for a select few. One of those select few happens to be a long-time wrecking crew member who fell in love with both Black Sheep bikes that we’ve tested. He put his money where his mouth is and ordered a custom 36-inch-wheel version but without the rear-stay couplers because of the creaking.

The Science Of Picking The Right Handlebar Height